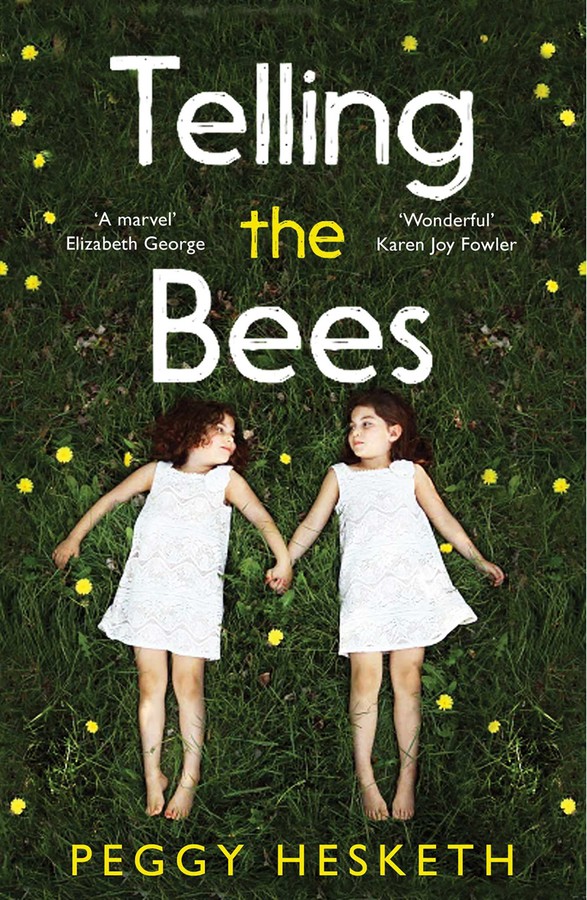 Albert Honig’s most constant companions have always been his bees. A never-married octogenarian, he makes a modest living as a beekeeper, as his father and his father’s father did before him. Deeply acquainted with the workings of his hives, Albert is less versed in the ways of people, especially his neighbour Claire, whose beauty and vivaciousness transformed his young life. Yet years passed by, feelings were repressed, and chances missed.

Until one day Albert, led by a trail of bees, discovers Claire’s body. Through the quiet minutiae of life, he begins to examine the truths that lay hidden under the secrets and silence that hovered between them for so long. With echoes of The Remains of the Day, Telling the Bees is a haunting novel about lies of omission and commission, the persistence of regret, and the sweet anguish of re-opening wounds in order to finally heal them.

Peggy Hesketh is a journalist and author, and currently teaches writing and rhetoric at the University of California. Her short story 'A Madness of Two' was selected by Elizabeth George for inclusion in her anthology Two of the Deadliest.

'What a wonderful novel! The voice is so masterfully done, the mysteries of life and death so compellingly evoked.'

– Karen Joy Fowler, author of We are All Completely Beside Ourselves

‘A marvel. With infinite compassion and perfect pitch, Peggy Hesketh has written an American classic.’

‘In her invention of the singular Mr. Honig (and his life, from an early age) Hesketh has created a stubborn and enigmatic and duplicitously withholding character whose life story is nonetheless told richly, in turns melancholy, exhilarating, sociological, with a murder mystery and a deep appreciation for the stories we all construct for ourselves and for others.’

‘A stately and beautiful novel … Only a superhuman reader will be able to resist foraging through the house looking for that half-eaten jar of honey.’

‘A story of shared history, secrets of omission, and revisited memories, Telling the Bees is nostalgic and hauntingly poetic. Richly detailed and sparsely populated … Reminiscent of the work of Karen Joy Fowler and Peter Orner, Telling the Bees reminds readers that even quiet hives are deceptively active.’

‘Reminiscent of Marilynne Robinson’s Gilead, Hesketh’s debut explores family secrets and end-of-life reflections. The author’s exceptional storytelling skills allow us not only to understand Albert’s feelings, but to experience those emotions right along with him. Readers in search of a heartfelt, thought-provoking novel will find what they are looking for in this journey through the life of an unassuming apiarist who knows more about his reclusive neighbors than anyone could guess.’

'‘Like Albert himself, Peggy Hesketh’s debut novel, Telling the Bees, feels like something from another time. Though Hesketh does tackle some difficult material, she does so with a graceful sensibility, never veering into the sordid or macabre. Elegiac in its tone, Telling the Bees is a quiet, meditative novel, dressed up as a murder mystery, but more geared towards examining the intricacies of the human condition and the power of secrets when voiced than in identifying who killed Claire. As Albert slowly sifts through his fragile memories of the past, patient readers will be rewarded with a rich story that softly stings and is utterly unforgettable.’

‘Elegantly crafted … While readers are likely to find themselves longing for a plate of buttered toast and honey, there’s nothing ‘cozy’ about Telling the Bees – it’s downright gorgeous.’

'An engrossing and unputdownable read.'

'In Peggy Hesketh's poignant debut novel, Telling the Bees, the lasting effects of long held secrets is at the core of beekeeper Albert Honig's otherwise quiet world. In the twilight of his life, Honig is haunted by the past memories of his long-time neighbors. Rich in detail, Hesketh has crafted a thoughtful, compelling story of loss and regret and the unforeseeable consequences that come when the truth is finally revealed. A wonderful read.'

'Telling the Bees is a charming tale of a bygone era evoking the power of the past to influence the future. Hesketh's ability to create an evocative narrative will leave readers eager to read more by this talented writer.'

‘The plot of Peggy Hesketh’s Telling the Bees skillfully revolves around an act of violence and its aftermath; however, the book’s deepest secrets involve more than crime, emerging subtly through the voice of an aged, bachelor beekeeper whose painfully reserved past and solitary present prove inseparable. Elegiac and intelligent, Telling the Bees reminds us with craft comparable to Ishiguru’s The Remains of the Day that even the most quiet-seeming lives may be abuzz with ache, awareness, and the persistence of memory. Peggy Hesketh is a novelist of patient grace and power.’

– Gordon McAlpine, author of Joy in Mudville and Hammett Unwritten