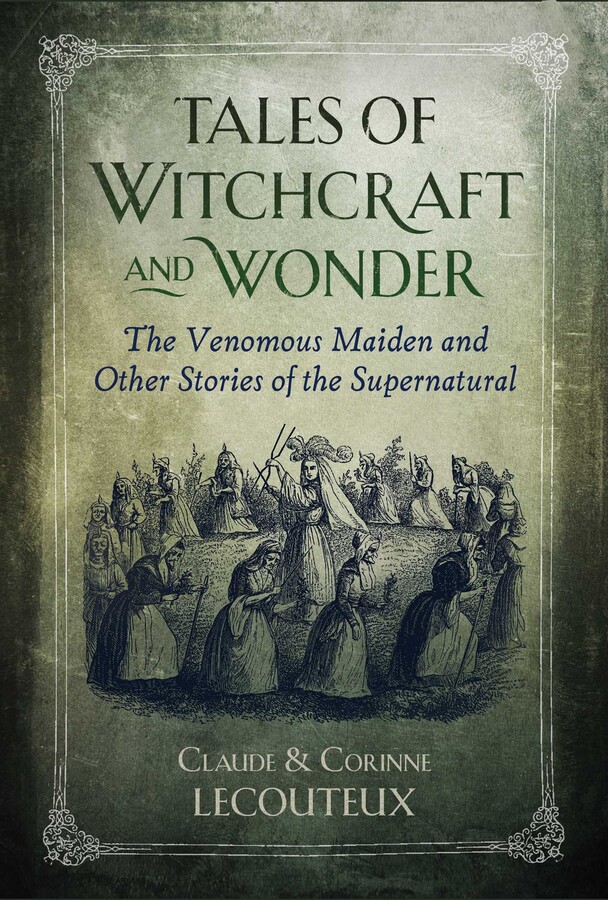 Tales of Witchcraft and Wonder

The Venomous Maiden and Other Stories of the Supernatural

A collection of tales from the Middle Ages focused on otherworldly powers, magical animals, miracles, demonic apparitions, and supernatural events

• Explores how the tales transformed over the ages and their origins in Classical Antiquity, the Middle East, and India

The Middle Ages witnessed the blossoming of oral traditions whose echoes can still be found in many legends, fables, and tales today.

In this collection of medieval tales of witchcraft, wonder, and the supernatural, Claude and Corinne Lecouteux explain how many of these stories arose in Classical Antiquity while some made their way into Dark Ages Europe from the Middle East and India. Offering commentary for each tale, the authors place them in historical context and analyze their cultural and esoteric associations. They include stories never-before-translated from their original Latin or demotic versions and show how, unlike the well-known fairy tales made popular by the Brothers Grimm, many stories were purposely left in obscurity because they presented scandalous depictions of popes and other notables. Additionally, for many of the tales, the authors scrupulously peel back the Christian veneer to show how the stories were instrumental in assuring the survival of age-old pagan beliefs across the centuries.

These beliefs are explored through tales of animals with magical powers and the ability to converse with humans, including the tale of the Grateful Lion made famous through Aesop’s fables; stories of individuals with supernatural or otherworldly powers, like the Venomous Maiden who poisons all men who have relations with her; legends of miracles and wondrous things that violate the laws of nature, such as people returning from the dead to help a descendent; and stories of witchcraft, magic, and demonic apparitions, including the pope who was a disguised demon. The authors also explore tales of supernatural spouses and illicit love affairs, wisdom teachings and parables of fools, as well as heroic legends.

Gerbert of Burgundy, a young man of high birth, good character, and fine reputation, was a student in Reims. Thanks to his efforts, intelligence, and his eloquence, he outdid all his fellow students. During this time, all were vying for the hand of the daughter of the Provost of Reims. Gerbert heard speak of her and, as soon as he laid eyes upon her, admired and desired her for himself. He engaged her in conversation and was bewitched by her words. He spent his time pleading his case with her with stubborn insistence tortured by the conviction that he had no hope. His mental tranquility abandoned him and he could no longer manage his affairs or take care of his fate. He therefore lost his money and, overburdened with debt, abandoned by his servants, and avoided by his friends, found himself all alone in his home hairy and dirty, unshaven and unkempt.

One day he left the city at noon to take a stroll. Tormented by hunger, he walked deep into the forest. He came to a clearing where he found a woman of unprecedented beauty,(17) sitting on a large silk carpet with an enormous pile of money at her feet. In fear that she was a phantom or apparition, Gerbert retreated, but she called him by name(18) while telling him he could trust her. Showing that she had taken pity on him, she promised him all the money he saw there and as much as he could desire,(19) if he scorned the daughter of the provost who had sneered at him and if he truly wished to join with her as a friend. She added: “My name is Meridiana and I was born to a very noble family. I have always wished to meet someone like me and who was worthy of plucking the first flowers of my virginity.(20) You please me beyond all measure. So long as you give me nor reason to become angry, you will be rich and famous, but, once you have recovered your prosperity thanks to me, you must reject the one who made you suffer.(21) I know that she will regret rejecting you and come back to one she scorned if she is allowed to do so. If chastity had compelled her to reject your advances, she would have earned divine grace, but by rejecting you with scorn, she could give herself to others without being suspected. Your public discomfiture masked her depraved activities. If you always consider that she is unworthy of your embraces, you shall be the greatest of the great on earth. Perhaps you are scared that you are the victim of an illusion and you seek to escape the artifices of a demon succubus in me?(22) You are wrong, for they always demand a commitment or a guarantee,(23) and that I do not ask of you! Take away this money before our union and gradually return to fetch more, in a way to prove that the money you use to settle your debts is not magical in origin. I want to be loved, not as a superior or even as an equal, but as a servant. You will find nothing in me that is not breathing love.” Desiring what she was offering him, because he wished to get out of poverty at any price, Gerbert knelt and promised.

Returning home laden with money, he settled his debts little by little so as not to arouse suspicion. He bought furniture, hired servants, and accumulated jewels and money. He fortified himself by eating and drinking, and his happiness in bed at night was great. Every night, Meridiana, who had knowledge of the past, taught him what he needed to do the next day. Gerbert profited from this double teaching of bed and school, and reached the highest heights of renown. Meridiana guided him to the peak of glory. In no great time he had become one with no equal, one who was bread to the starving and clothing to the poor, and the savior of all the oppressed.

When she heard people talking of him, the provost’s wretched daughter, realizing she had been forgotten, then began burning for the first time with the fires that she had so scornfully rejected. She tried to seduce Gerbert by all possible means, but in vain, and her passion turned into dementia. Over time, an old woman neighbor of Gerbert pulled her from her torpor and, through a hole in her hut, she showed her the object of her desire walking about a small orchard by himself. It was hot and Gerbert had just eaten. After a moment, they saw him stretch out in the shadow of a twisted oak to take a quiet nap. The provost’s daughter took off her coat and, wearing only her shirt, slipped beneath Gerbert’s tunic, and with her entire body tightly pressed against his, she aroused him with kisses and caresses. She had no trouble obtaining what she wanted from him because youth, the day, the food, and the wine had combined their different fires to kindle the fires of love, but he eventually remembered Meridiana. Confused and ashamed, he left to find her and to ask her forgiveness, which she granted him on condition he pay her homage.(24)

The Archbishop of Reims died and Gerbert was installed in his place. Then, during a trip to Rome, the Pope named him the Cardinal-Bishop of Ravenna. On the death of the Holy Father, Gerbert was selected to take the throne of Saint Peter. During his entire time in office, he did not take communion when celebrating Mass. During the last year of his papacy, Meridiana told him that he would remain alive as long as he did not say mass in Jerusalem.(25) But there came a time when he celebrated the mass in a Roman church named Jerusalem. Meridiana could not conceal her joy for she would soon have the pleasure of welcoming him to her home.(26) When he saw her and at her request he was reminded of the name of the place, before the assembly of all the cardinals, clergy, and people, he confessed publicly omitting not a single sin of his entire life.

Gerbert spent the little life remaining to him atoning, and he died after a sincere confession. He was interred in the Church Saint John of Latran. His marble mausoleum oozes moisture continuously but the drops never combine to form a trickle of water except to announce the death of a rich Roman.(27) It is said that it forms a stream that falls to the ground at the death of a pope, but when it concern a noble, the trickle only falls a third, a fourth, or a fifth of the distance, as if to indicate the importance by a larger or smaller flow of water.

Commentary: Walter Map (1135/40-1209/10), a cleric attached to the court of Henry II, King of England, collected a number of tales and legends recounting the meeting of a mortal and a fairy. Meridiana, the fairy of noon, grants her love to Gerbert on condition he give up the provost’s daughter, which is the rationalized form of a Melusine-like taboo. Because the lover broke his promise despite himself, he had to die. The story can also be found in the work of Victor de Beauvais (Speculum historiale, XXIV, 9) and Jean Gobi (Scala coeli, n° 56, 184), but in the latter’s book, a certain Robert replaces Gerbert.
Claude Lecouteux

Corinne Lecouteux is a translator specializing in tales and legends. She lives in Paris.

Tales of Witchcraft and Wonder

The Venomous Maiden and Other Stories of the Supernatural