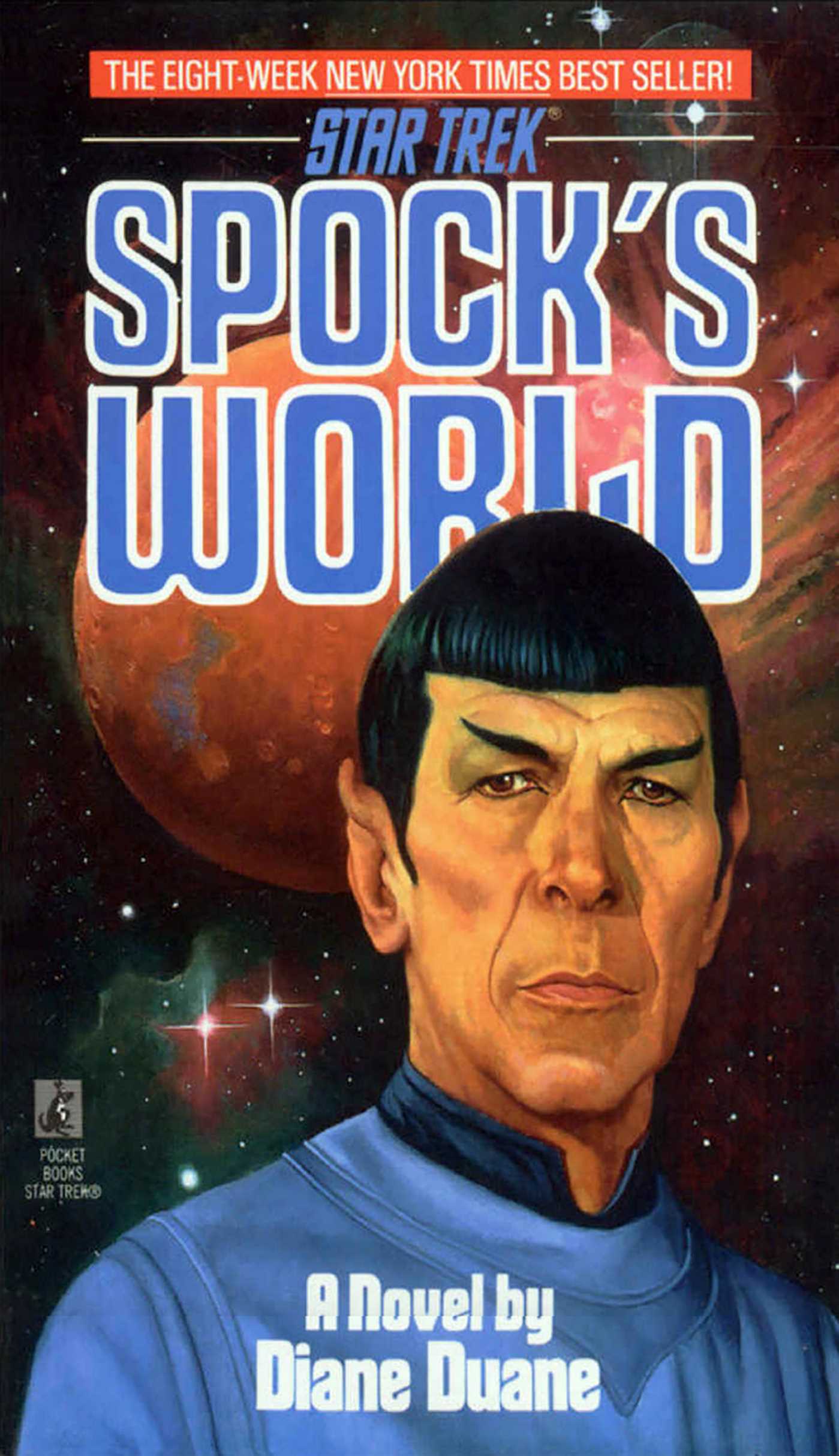 It is the twenty-third century. On the planet Vulcan, a crisis of unprecedented proportion has caused the convocation of the planet's ruling council -- and summoned the U.S.S. Enterprise from halfway across the galaxy, to bring Vulcan's most famous son home in its hour of need.
As Commander Spock, his father Sarek, and Captain James T. Kirk struggle to preserve Vulcan's future, the planet's innermost secrets are laid before us, from its beginnings millions of years ago to its savage prehistory, from merciless tribal warfare to medieval court intrigue, from the exploration of space to the the development of o'thia -- the ruling ethic of logic. And Spock -- torn between his duty to Starfleet and the unbreakable ties that bind him to Vulcan -- must find a way to reconcile both his own inner conflict and the external dilemma his planet faces...lest the Federation itself be ripped asunder.
Diane Duane, author of three previous bestselling STAR TREK novels and an episode of the new STAR TREK NEXT GENERATION® television series, as well as countless other bestselling science fiction and fantasy novels, has crafted a tale of unprecedented scope and imagination, at once a generations-spanning historical novel and a thrilling science fiction adventure.

Chapter One: Enterprise
Position yourself in the right place -- on the surface of the moon, say, somewhere near the slow-moving dayline, or in one of the L5 habitats swinging in peaceful captivity around the world -- and you can see it without any trouble: the old Earth in the new Earth's arms. Some people prefer her that way to any other. Not for them the broad blue cloud-swirled disk, all bright and safe and easily seen. They want mystery; they want the Earth's nightly half-bath in the old dark. She always emerges, but (to these people's relief) she always dips in again -- the blue fire fading away down through the spectrum, the rainbow of atmosphere's edge, down through the last flash of crimson, to black.
And when she does, the stars come out. Faithful as the other, farther stars, in steady constellations, they turn as the night that holds them turns -- he splatters of spilled-gem light that are BosWash, Ellay, Greater Peking, Bolshe-Moskva, Plu'Paris. The great roadways across continents are bright threads, delicate as if spiders of fire had spun them: here and there the light is gentled by coming from far underwater, as in the Shelf cities off the Pacific coasts of Japan and old North America. At the edge, a limb of brightness shows, the sunrise inexorably sliding around the curved edge of things: but the limb is narrow, the merest shaving of pearl and turquoise curving against the breadth of night. And for the time being, night reigns.
In places light shows without man having made it. When the moon is in the right phase, the polar icecaps are one wide sheen of palely burning white; the Rockies and the Himalayas and the Alps and Andes glow with a firefly fire, faint but persistent. Sometimes even the Great Wall will show: a silver hair, twisting, among the silver glint of rivers...and afterward the Moon will slide away and around in her long dance with the Earth to gaze at the great diffuse bloom of her own disk's light in Atlantic or Pacific. Half a month from now the Moon will swing around at the new, and all these places, under the sun again, will give their light back to her, ashen, a breath of silver against the dark side of the satellite's phase. But for now the Earth keeps the moonlight and the romance to herself, slowly turning, shimmering faint and lovely like a promise made and kept a long time ago. Darkness scattered with diamonds, and the darkness never whole: there she lies, and turns in her sleep...
...and over her comes climbing other light, passing out of the fire of the far side's day: a golden light like a star, dimmed from a blaze to a spark as it passes the terminator, twenty-five thousand miles high. Moonlight silvers her now as she approaches, not hurrying, a shade more than eleven thousand miles per hour, not quite geosynchronous, gaining on the Earth. She seems a delicate thing at first, while distant -- a toy, afl slender pale light and razory shadows -- then bigger, not a toy anymore, the paired nacelles growing, spearing upward, reaching as high as thirty-story buildings, the main dish blocking the sky away from zenith to "horizon" as it passes by, passes over. Silent she passes,, massive, burning silver, gemmed in ruby and emerald with her running fights, black only where shadows fall and where. the letters spell her number and name in one language of her planet of registry, the planet she's about to leave. NCC 1701, the Starship Enterprise, slips past in moonlight, splashed faint on her undersides with the light of Earth's cities, ready to give all the light up for the deep cold dark that is her proper home...

The officers' mess was one of the more enjoyable parts of the ship, and not merely because it was for the officers. One could make a case that numerous parts of recreation and the arboretum were much nicer. But there was no faulting the view from the officers' mess. It was on the leading edge of the disk, with real windows, not viewscreens: floor-to-ceiling windows that gave the illusion of sitting at the twentythird century equivalent of a ship's prow. At sublight, the stars naturally didn't seem to move, but Sulu was apparently opting for the scenic route out through Sol system, the so-called "Grand tour," which more than made up for it. Jupiter swain slowly into view, a huge striped-candy crescent, then grew gibbous, then full, as Sulu slipped the Enterprise around the planet's curvature, slowly enough to pick up a little slingshotting from gravity, swiftly enough not to let the impulse drivers disturb or be disturbed by Jupiter's radiopause. Various moons whipped or lazed around the planet like thrown ball bearings as Enterprise passed her. Saturn was a yellow white star in the distance, growmig in the darkness as Sulu made for her.
Jim pushed his plate aside, having finished with his steak, and puffed the table screen close again on its swinging arm. Holding on it, amber on black, was a page of data.
Msg: 2003469
Date: 7416.864
Sec: WANTED/BUY/SELL/EXCHANGE
From: Cally Sherrin/spec4.sci
Subj: USED B'HIVA
Origin: XenoBiology Lab IV/term: 1154/606
**************FOR SALE*************
Best Quality Andorian B'hiva
One Careful Owner
No Dropouts! No lost meaning!
Warranty still in force
180 cr or best offer
Leave msg in BUYSELL or email area 6
************************************
Now what the devil is a b'hiva? Jim thought, and kept reading.
Msg: 2003470
Date: 7417.903
Sec: WANTED/BUY/SELL/EXCHANGE
From: Nyota Uhura/Cmdr:comms
Subj: Taped Dictionaries
Origin: Communications/term:181/53
While on leave planetside (Terra or Luna), did anyone happen to pick up one of the taped or solid "tourist dictionaries" of local languages sometimes sold in souvenir shops, etc? Want to dump the thing? I'll trade you classical music, third-stream jazz, exotica, drama (BBC, RSC, Bolshoi a specialty). Looking particularly for Romanian, Kampuche, tlLow, Eurish (Dalton recension if possible), and other artificials (Anglish, Neolangue, SinoFrancaise, Cynthetic). Thanks! N.J.
Still working on her doctoral thesis, Jim thought. Uhura was busy working on improving universal translator theory, mostly by taking the old theory to pieces and putting it back together in shapes that were causing a terrible furor in academic circles on various planets. Jim vividly remembered one night quite a long time ago when he had asked Uhura exactly how she was going about this. She had told him, for almost an hour without stopping, and in delighted and exuberant detail, until his head was spinning with phoneme approximations and six-sigma evaluations and the syntactic fade and genderbend and recontextualization and linguistic structural design and the physics of the human dextrocerebral bridge. The session had left Jim shaking his head, thoroughly disabused of the idea (and ashamed of how long he had held it) that Uhura was simply a sort of highly trained switchboard operator...And as regarded her doctoral thesis, he could have found out simply enough that she was still working on the Earth-based algorithms, just by asking her: but this was a more interesting way of finding out. Cynthetic? he wondered, and made a mental note to ask her about it at the party.
He scrolled down through various replies to Uhura's message -- apparently quite a few people had picked up dictionaries that were now (or had immediately turned out to be) useless -- and finally determined to leave these messages for later. "Change area," he said to the screen. "Common room."
The screen flickered and gave him another page.
COMMON ROOM
OPINION, INFORMED AND NOW
RANTING AND RAVING PERMITTED
NAMES NOT NECESSARY
It was one of the places he came to find out what his crew was thinking. Messages did not have to be attributed to a name or terminal, but they could not be private. The office of common room system operator rotated through the crew, offered to various members on the strength of their psych profiles in areas like calm reaction to stress and anger. The common room sysop tended to be closemouthed and dependable, the kind of person that others refer to as "a rock." (Once it had actually been Naraht, to the amusement of just about everyone.) Here tempers could flare, awful jokes be told safely, suspicions be aired, rumors be shot down. The common room was sometimes a peaceful place, sometimes a powderkeg. Jim never ignored it.
He scanned through the most recent messages, and one caught his eye:
FROM: Bugs
DATE: 7412.1100
VULCANS: WHO NEEDS 'EM?
They can't take care of themselves anymore. They can't even take care of a starship if you give it to them -- and now they claim that they're not goodenough for us? Well, **** 'em and the sehlat they rode in on.
Just fooling.
Jim breathed out. Serious? Or not? The statement mirrored some that he had heard on Earth, as this crisis had built and brewed. He scanned down the page.
Farther down, other people came in and maligned Bugs, whoever he or she or it was. Remarks appeared along the lines of "Maybe they've got a point: maybe we aren't good enough for them. Or good for them, anyway -- ." Other people said, "We need them. Someone has to tell them so. Let's hope that someone here can get it through those

Diane Duane is the author of The Door Into Fire, which was nominated for the World Science Fiction Society’s John W. Campbell Award for best new science fiction/fantasy writer two years in a row. Duane has also published more than thirty novels, numerous short stories, and various comics and computer games, several of which appeared on the New York Times bestseller list. She is best known for her continuing Young Wizards series of young adult fantasy novels about the New York–based teenage wizards Nita Callahan and Kit Rodriguez. The 1983 novel So You Want to Be a Wizard and its six sequels have been published in seven other languages, and are now routinely cited by librarians all over the US as “the books to read when you run out of Harry Potter.”