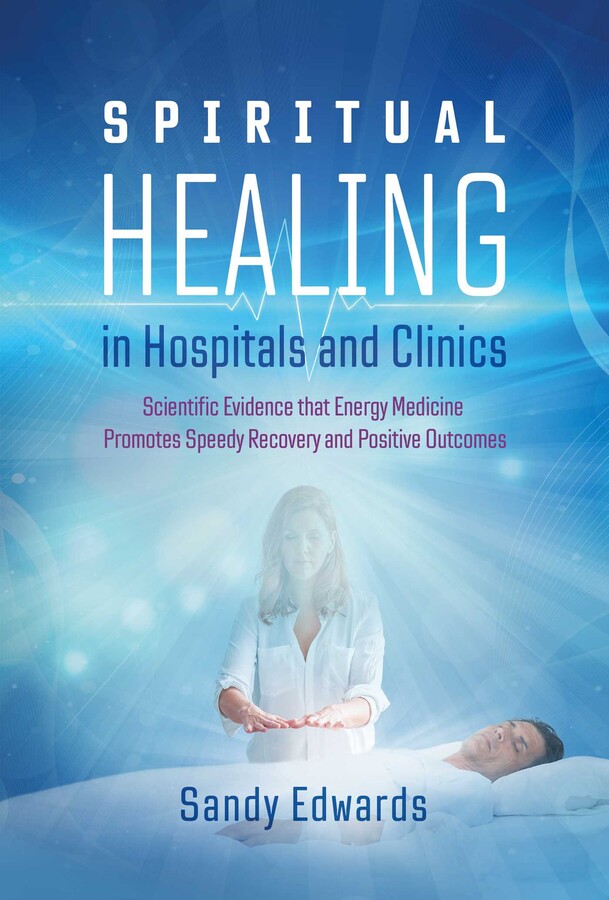 Spiritual Healing in Hospitals and Clinics

• Explores how spiritual healing not only led to improved outcomes for patients, but also faster recovery times and thus less time spent in hospitals

Seven years after qualifying to become a spiritual healer, Sandy Edwards approached a consultant gastroenterologist at a city hospital and offered to give healing to his patients as a volunteer. She provided healing sessions alongside conventional medical treatments, documenting the effects in a scientific way, and the doctor was surprised at the overwhelmingly positive outcomes. In partnership with the University of Birmingham, as well as a national grant to fund the study, Sandy instigated the largest clinical research trial of spiritual healing in the world.

Revealing the outstanding results of this two-year medical trial, which involved 200 chronically ill hospital patients, Sandy demonstrates that spiritual healing (energy medicine) can support the healing process of a patient, whether they are in pain, sick, stressed, or depressed. In many cases, these patients had been suffering for a long time with little hope of recovery. Yet they improved substantially in numerous ways after receiving just five 20-minute healing sessions.

Illustrating how spiritual healing helps a patient from pain and distress through to recovery, Sandy shares intriguing evidence from case studies as well as other research projects that negate the myth that energy healing is only a placebo. She offers statements from medical professionals who have witnessed the results firsthand and also details a quick technique to relieve pain that readers can apply in their own lives.

Showing how spiritual healing not only led to improved outcomes for patients, but also faster recovery times and thus less time spent in hospitals, Sandy moves us one step closer to widespread acceptance for spiritual healing and energy medicine.

From Chapter 3: Effects on Hospital Patients

Within a few weeks of beginning work at the hospital, I asked Dr Singh if I could conduct an audit of the patients’ responses. From the outset, it was clear that people were benefiting from their twenty-minute healing session and I wanted to record their comments rather than lose valuable feedback to the ether.

My first set of questions asked how the patient had been over the past week. This included how much pain they had been in, how well they had slept and how good their relationships had been. The second set focused on how the patient felt after seeing the consultant but immediately before the healing session. The third and last section recorded any differences directly after the healing session. A separate sheet of identical questions asked how they were faring one week later.

Although all of the participants would obviously have gastroenterological complaints, I did not want the questionnaire to focus on that particular aspect. Another disorder might be their worst problem.

For instance, I had learned that alcohol and drug addictions can lead to gastrointestinal problems, so some of Dr Singh’s patients would be suffering deep emotional problems with far-reaching consequences. Rather than the effect on specific symptoms, I wanted to find out whether healing improved their experience of life. Pain relief, feeling positive, sleeping better and improved relationships seemed the most important elements.

After each question, I gave a scale of one to six so that the participant could indicate the severity of the issue. ‘1’ was clearly labelled as ‘Excellent’ and ‘6’ as ‘Terrible’, but some people were still confused about which end of the scale was which. Some people would start off correctly but then suddenly switch partway down the list of questions. Interestingly, confusion only occurred on the first two sections of the questionnaire – the ones completed before the healing session. Nobody got muddled completing the section that came after the healing session. I suspect that their new clarity of mind was due to being so relaxed. Nor did they get mixed up when filling in their ‘one week later’ form in the privacy of their own homes. Again, perhaps this was because they were still feeling calmer and therefore better able to concentrate.

At Dr Singh’s request, one of the questions asked patients to give a score for their well-being. The term seemed vague to me, so when I went through the form with patients I verbally explained the meaning before they gave their score for it. When patients completed their ‘one week later’ sheet at home they must have remembered my explanation because their scores were in keeping with the rest of the feedback. This point becomes important later regarding the research results. . . .

Not one of the patients at the hospital was actively looking for healing, so they are in a completely different category from those who come to our healing centre. People who actively seek healing are willing to make an effort to attend, are prepared to make a donation and are hopeful of a positive outcome. The people at the hospital, on the other hand, probably agreed to have a session only because Dr Singh suggested it to them in positive terms and they did not like to refuse. In addition, it was available immediately, free of charge and in the next room. It could not have been easier for them.

Whilst walking with them for the few steps between Dr Singh’s room and mine, I would usually break the ice by asking whether they had ever had healing before. Almost nobody had. Surprisingly, out of these seventy-five patients, only the tiniest proportion had ever accessed a complementary therapy of any description. In fact, the same ratio applied to all of the patients I saw there. Yet the Department of Health’s document Complementary Medicine Information for Primary Care Groups paints quite a different picture. It states: “In any year it is estimated that 11% of the population visited a complementary therapist for one of . . . six named therapies.”

The “six named therapies” are acupuncture, aromatherapy, chiropractic, homeopathy, hypnotherapy and osteopathy. If healing and popular treatments such as aromatherapy, reflexology and reiki were added to the list, the quoted percentage of 11 per cent would be very much higher. But even the quoted 11 per cent level was in no way reflected among the hundreds of patients I treated at the hospital. It occurred to me that perhaps people who do embrace complementary therapies are less likely to need a consultant. This might help explain why the national figures are so wildly different from my findings with Dr Singh’s patients.

A young woman who had been one of Dr Singh’s patients for three years had told me nothing of her condition and was secretly convinced that healing could not make a difference. This is the letter that she subsequently wrote:

“Three years ago I was diagnosed with an autoimmune disease. I began a heavy dose of steroids, along with other forms of medication to bring the illness under control. I had ups and downs and every so often I felt so ill that I would have to stay in bed. But with the loving support of my family I always pulled through, stronger in spirit than before.

“Recently, one of my symptoms was what I can only describe as ‘heavy legs’. I was unable to walk with the heavy weight of each leg. I collapsed at work and I was off work for a week. There was no explanation as to why my legs were failing to work properly and blood test results came back normal. I believed that I would just have to grin and bear it. That is, until my consultant suggested that I have a healing session. I have to admit that I was very sceptical as I had never been treated by a healer and had no faith in them.

“Sandy Edwards was pleasant, warm and welcoming but I was still wary and decided not to tell her of my ailments or give her any information, just to see the true outcome of the healing session.

“I felt what can only be described as lighter. In fact, I went home and took my two crazy dogs for a walk! This was something I had not managed to do for the past two weeks. When I returned home from the walk, my legs were shaky and had returned to the heavy feeling. But the next day my legs began to return to normal. The weight left my legs, and the soreness on the balls of my feet vanished. The following day was as if nothing had been wrong with me and I returned to work.

“I did not believe that an alternative method would convert me from a very poorly, non-walking girl to my old healthy self within days. I was sceptical and believed that only a pill could help me get better but now I am more flexible in my thinking.”

A senior consultant physician witnessed his patients benefit from one twenty--minute healing session, some to a remarkable degree.

Few of these patients had accessed complementary therapies before, and almost all were highly sceptical that healing could help.

These patients’ symptoms were resistant to standard and specialist treatment, but they were helped in various ways by one session of spiritual healing.

Patients with long--standing addictions were helped by one healing session.

One healing session resulted in substantial improvements regarding pain relief, well--being, relaxation, relationships, energy levels and sleep quality.
Improvements were retained for at least one week by almost all the patients who returned their ‘one week later’ form.

Patients who received healing were keen to have more.

Patients who attended follow--up appointments months later confirmed that they had continued to benefit.

Improvements for some may have been permanent.

The two hospital audits -- of seventy--five and 192 patients respectively -- resulted in similar findings to each other, thereby confirming the reliability of both.

Hardly any of these patients had received healing before and did not know what to expect, yet their comments reveal similar themes.
Sandy Edwards

Sandy Edwards is a fellow of the Healing Trust, UK. She set up a voluntary healing clinic, and volunteered in hospitals, before instigating the largest medical research trial of spiritual healing, the results of which she presented at the Houses of Parliament in London. Sandy has served as a trustee of the Healing Trust charity and lives in Dorset, UK.

Spiritual Healing in Hospitals and Clinics