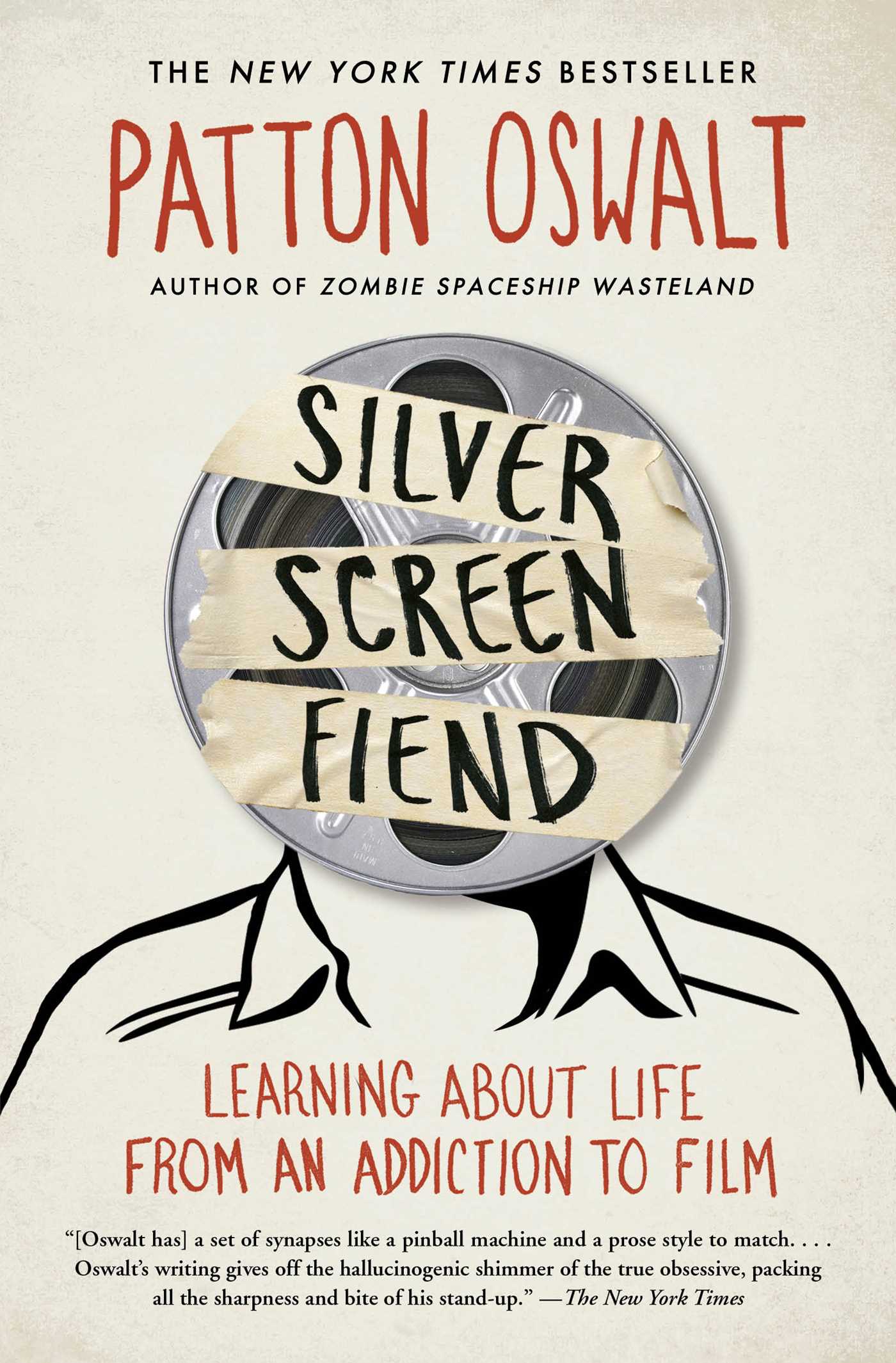 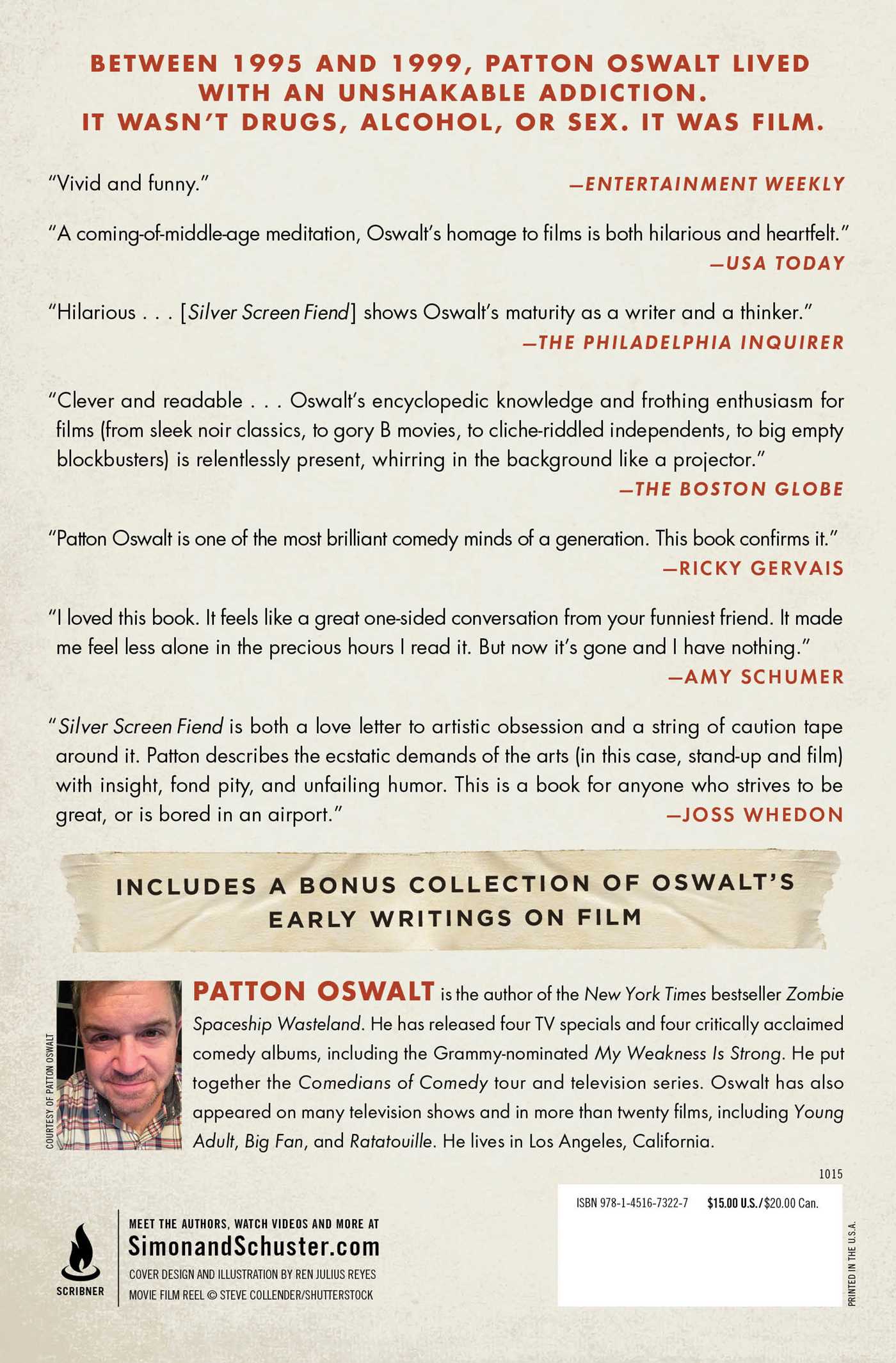 The instant New York Times bestseller from author, comedian and actor Patton Oswalt, a “heartfelt and hilarious” (USA TODAY) memoir about coming of age as a performer during the late 1990s while obsessively watching classic films at a legendary theater in Los Angeles. “[Oswalt has] a set of synapses like a pinball machine and a prose style to match” (The New York Times).

Between 1995 and 1999, Patton Oswalt lived with an unshakable addiction. It wasn’t drugs, alcohol, or sex: it was film. After moving to Los Angeles, Oswalt became a huge film buff (or as he calls it, a sprocket fiend), absorbing classics, cult hits, and new releases at the famous New Beverly Cinema. Silver screen celluloid became Patton’s life schoolbook, informing his notion of acting, writing, comedy, and relationships.

Set in the nascent days of LA’s alternative comedy scene, Silver Screen Fiend chronicles Oswalt’s journey from fledgling stand-up comedian to self-assured sitcom actor, with the colorful New Beverly collective and a cast of now-notable young comedians supporting him all along the way. “Clever and readable...Oswalt’s encyclopedic knowledge and frothing enthusiasm for films (from sleek noir classics, to gory B movies, to cliché-riddled independents, to big empty blockbusters) is relentlessly present, whirring in the background like a projector” (The Boston Globe). More than a memoir, this is “a love song to the silver screen” (Paste Magazine). 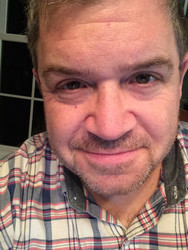 Patton Oswalt is the author of the New York Times bestseller Zombie Spaceship Wasteland. He has released four TV specials and four critically acclaimed comedy albums, including the Grammy-nominated My Weakness Is Strong. He put together the Comedians of Comedy tour and television series. Oswalt has also appeared on many television shows and in more than twenty films, including Young Adult, Big Fan, and Ratatouille. He lives in Los Angeles, California.

“Patton Oswalt is one of the most brilliant comedy minds of a generation. This book confirms it.”

"I loved this book. It feels like a great one sided conversation from your funniest friend. It made me feel less alone in the precious hours I read it. But now it's gone and I have nothing."

“Silver Screen Fiend is both a love letter to artistic obsession and string of caution tape around it. Patton describes the ecstatic demands of the arts (in this case, Stand-up and Film) with insight, fond pity, and unfailing humor. This is a book for anyone who strives to be great, or is bored in an airport.”

"Smart and pointed. [Oswalt] is a colorful writer."

"A funny and sentimental read.... deep, passionate, and personal."

"Immediate and vital... [Silver Screen Fiend is] enough to make any reader seek out the many films that made him hibernate in the first place.

Oswalt's prose is sparkling.... A coming-of middle-age meditation, Oswalt's homage to films is both hilarious and heartfelt."

"Hilarious.... [Silver Screen Fiend] shows Oswalt's maturity as a writer and a thinker."

"[Oswalt has] a set of synapses like a pinball machine and a prose style to match....Oswalt's writing gives off the hallucinogenic shimmer of the true obsessive, packing all the sharpness and bite of his stand-up."

"Clever and readable...Oswalt’s encyclopedic knowledge and frothing enthusiasm for films (from sleek noir classics, to gory B movies, to cliche-riddled independents,to big empty blockbusters) is relentlessly present, whirringin the background like a projector."

"A must for fans of comedy and film."

Oswalt is a great conveyer of his real-life (and reel-life) experiences....great insider stuff."

"[An] astute, acerbic, and footnote-crazy chronicle of life as a "movie freak mole man." ... Oswalt is a true cinephiliac, equally appreciative of the artistry of Jean Cocteau's Beauty and the Beast and Doris Wishman's Bad Girls Go to Hell."

"Anyone who loves movies...will be better for reading this enjoyable and funny memoir."