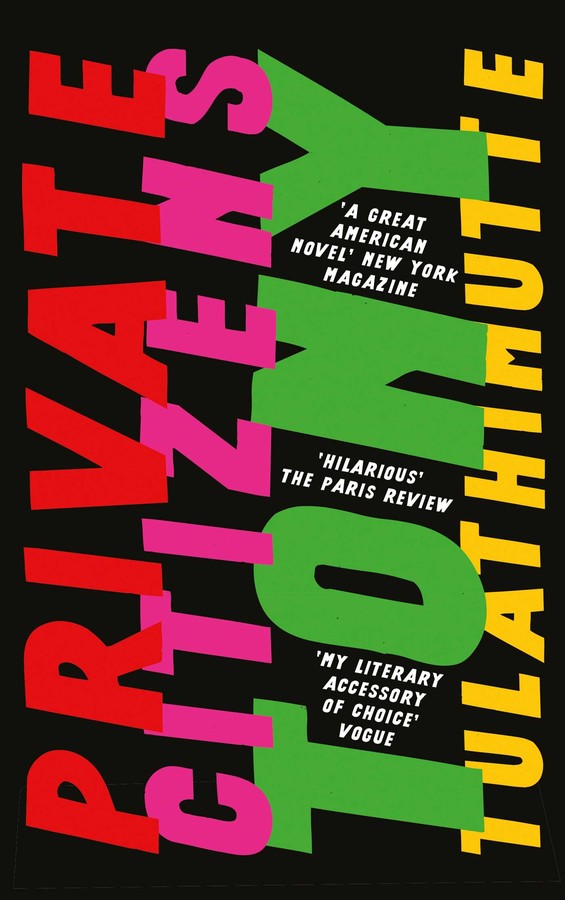 *A GUARDIAN BOOK OF THE YEAR 2016 – SELECTED BY JONATHAN FRANZEN*

Capturing the anxious, self-aware mood of young college grads in the noughties, Private Citizens embraces the contradictions of our new century. Call it a gleefully rude comedy of manners, a Middlemarch for Millennials. The novel's four whip-smart narrators – idealistic Cory, Internet-lurking Will, awkward Henrik, and vicious Linda – are torn between fixing the world and cannibalizing it. In boisterous prose that ricochets between humour and pain, the four estranged friends stagger through the Bay Area’s maze of tech start-ups, protestors, gentrifiers, karaoke bars, house parties and cultish self-help seminars, washing up in each other’s lives once again.

A wise and searching depiction of a generation grappling with privilege and finding grace in failure, Private Citizens is as expansively intelligent as it is full of heart.

Tony Tulathimutte is the author of Private Citizens. He has written for Vice, The Atlantic, The Paris Review, The New Yorker, N+1, AGNI and Salon. A graduate of Stanford University and the Iowa Writers' Workshop, he has received an O. Henry Award, a Truman Capote fellowship, a MacDowell Colony fellowship and the Michener-Copernicus Society of America Award

'Tulathimutte is a big talent.’

‘Although the four protagonists don’t shower themselves in glory, their creator certainly does.’

‘At its very best it strikes one as a particularly savage episode of Seinfeld.’

‘A sketch of the way US millennials, and the only slightly older men and women who employ them, live now’.

‘Tulathimutte’s scalpel of cultural dissection is very sharp indeed…[his] verve and linguistic agility reminiscent of the best literary comic performers…Hilarious and relentlessly uncompromising…he has everything it takes to become a great American novelist’.

– Emma Cline, author of The Girls

‘In this lovingly portrayed hell, the body is excess baggage, and selfdoubt poses dangers so grave only a writer would risk it. It’s not a satire, but an eloquent social novel bristling with logic.’

‘The quality and confidence of Tulathimutte’s writing is evident throughout the book…Private Citizens works so well because there’s a realness to everything the characters experience. This is not parody or satire, just the sometimes grotesque behaviour of millennials under a searing spotlight’.

‘[A] thrillingly sceptical vision of the noughties’.

‘If Evelyn Waugh and Tom Wolfe had a baby, one who wrote sensibly about the subset of people that Dave Eggers has written about whimsically, that baby would probably be Tony Tulathimutte and the book would be Private Citizens…A hilarious portrait of youthful self-centeredness.’

‘My literary accessory of choice is Tony Tulathimutte’s Private Citizens.’

‘I didn’t know if I wanted to read a novel about screwed-up Stanford grads in 2007, but when it’s this caustically smart and funny, it turns out I like nothing better.’

‘Brilliant…hilarious and heartbreaking all at once.’

‘My favourite kind of novel: an entrancing narrative in which important ideas lurk around the corners and behind the curtains. It enchants, entertains, sometimes makes me chew my nails in dread, sometimes makes me laugh my ass off, and never, ever doubts my intelligence.’

– Benjamin Hale, author of The Evolution of Bruno Littlemore

‘Tony Tulathimutte is a virtuoso of words… [his] writing edifies and entertains in language that’s highbrow yet unwholesome- gourmet junk food, like the cereal-milk-flavored soft-serve at Momofuku Milk Bar.’

‘Private Citizens is a combustible combination of acrobatic language, dead-on observations and hilarious, heartbreaking storytelling. Tulathimutte has created characters that are hard to forget – first they’ll make you want to strangle them, then you’ll end up falling in love with them.’

‘A spot-on rendering of contemporary San Francisco in all its numinous hippie- hipster- techbro- burnout- activist-ridden glory. But it is the book’s style that makes it stand out. Tony Tulathimutte writes sentences with a reckless verve that reminds one of the best of David Foster Wallace. He’s a major American talent.’

– Karan Mahajan, author of The Association of Small Bombs

‘Finally, Millennial Heroes and Heroines in a Great American Novel.’

‘The novel is as funny as it is dark, and things get very dark, indeed.’

‘The product of a whirring intellect with brilliance to burn…Like watching a mad genius at work in his laboratory, conjuring the magnificent and the monstrous into life.’

– Anthony Marra, New York Times-bestselling author of The Tsar of Love and Techno

‘Tulathimutte’s accomplished, witty, often hilarious debut transforms the Bay Area into a Balzacian microcosm that seems to contain every germ of contemporary American life and youth.’

'A hilarious and gutsy novel that does the braver thing, reinvesting the world we know with humanity. Tony Tulathimutte’s satire cuts deep, but has a tender belly – and this book will leave you raw with feeling and aching at the ribs.’

– Alexandra Kleeman, author of You Too Can Have A Body Like Mine

‘To the dismay of olds everywhere, it may well be time that we start asking whose writing will populate the ‘millennial canon.’ Tony Tulathimutte’s debut novel, Private Citizens, is the answer to that question.’

‘Private Citizens succeeds on the charm of its verisimilitude and the brilliance of its observations.’

‘Tulathimutte’s debut is poetic and verbose...an impressive start for an edgy new writer.’

'Tulathimutte exhibits a talent for satire, and a willingness to embrace brutal reality and outright absurdity.’

'Tony Tulathimutte’s militantly ironic debut novel, Private Citizens, is set in San Francisco during a golden hour for upper millennials...[It] takes its title as a paradox, or as a challenge...The one thing the novel can still do better than other art forms is represent inner life...Tulathimutte’s realism tends to be hysterical as in ha ha...I was riddled by Tulathimutte’s ending.’

‘[A] razor-sharp debut...Witty, unsparing, and unsettlingly precise. Tulathimutte empathises with his subjects even as he (brilliantly) skewers them. A satirical portrait of privilege and disappointment with striking emotional depth.’

‘A freak of literature – a novel so authentic, hilarious, elegantly plotted and heartbreaking I’d follow it anywhere.’

‘Tony Tulathimutte’s brilliantly well-told story of four friends who are trying to become adults in tech-addled late-aughts San Francisco is somehow both unsparingly cruel and compassionate in equal measure. His protagonists struggle against the worst in their culture and themselves in a way that is sad, funny, and infinitely relatable.’

– Emily Gould, author of Our Spoons Came from Woolworths