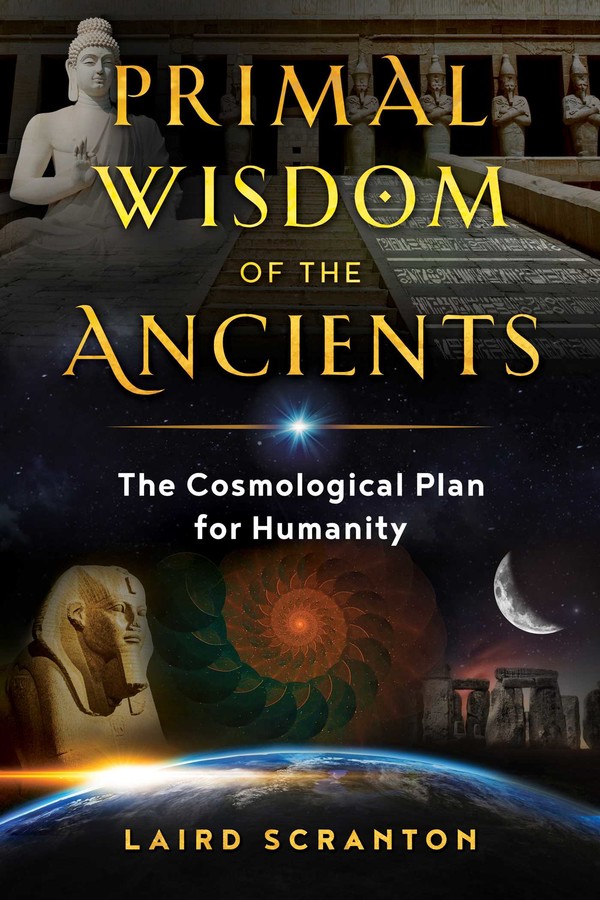 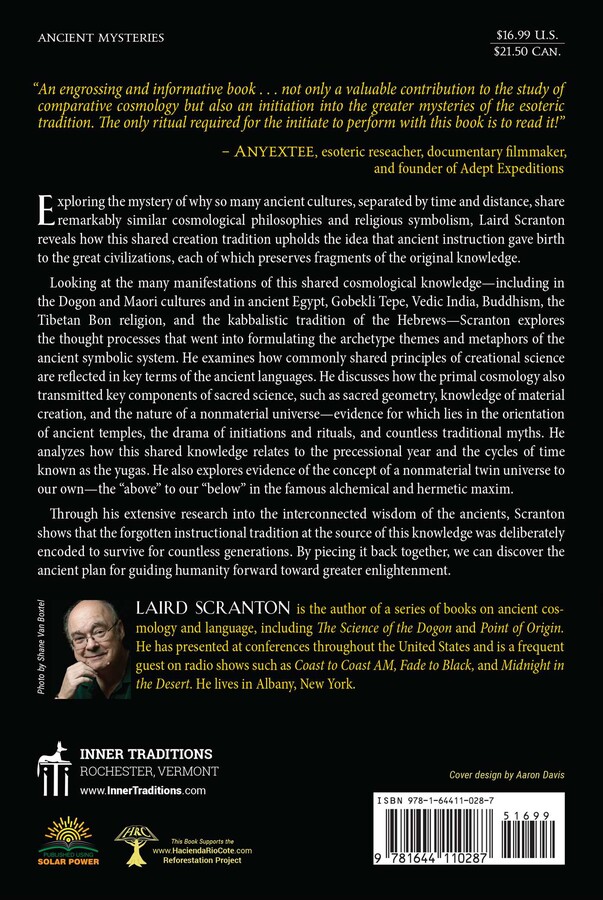 Primal Wisdom of the Ancients

The Cosmological Plan for Humanity

Exploring the mystery of why so many ancient cultures, separated by time and distance, share remarkably similar cosmological philosophies and religious symbolism, Laird Scranton reveals how this shared creation tradition upholds the idea that ancient instruction gave birth to the great civilizations, each of which preserves fragments of the original knowledge.

Looking at the many manifestations of this shared cosmological knowledge, including in the Dogon and Maori cultures and in ancient Egypt, Gobekli Tepe, Vedic India, Buddhism, the Tibetan Bon religion, and the kabbalistic tradition of the Hebrews, Scranton explores the thought processes that went into formulating the archetype themes and metaphors of the ancient symbolic system. He examines how commonly shared principles of creational science are reflected in key terms of the ancient languages. He discusses how the primal cosmology also transmitted key components of sacred science, such as sacred geometry, knowledge of material creation, and the nature of a nonmaterial universe--evidence for which lies in the orientation of ancient temples, the drama of initiations and rituals, and countless traditional myths. He analyzes how this shared knowledge relates to the precessional year and the cycles of time known as the yugas. He also explores evidence of the concept of a nonmaterial twin universe to our own--the “above” to our “below” in the famous alchemical and hermetic maxim.

Through his extensive research into the interconnected wisdom of the ancients, Scranton shows that the forgotten instructional tradition at the source of this knowledge was deliberately encoded to survive for countless generations. By piecing it back together, we can discover the ancient plan for guiding humanity forward toward greater enlightenment.

Chapter Four. Metaphors of the Cosmology

We have said that the scientific images and concepts that populate the ancient cosmology imply that its meanings were aimed at a future audience, one that would have necessarily gained the technological capability to recognize and confirm its references. The many intervening generations, for whom technology might not be sufficiently advanced to allow for that, were charged with the caretaking, preservation and transmission of those references (not a simple task, to anyone who ever played the children’s game of telephone). One challenge for the authors of the symbolic cosmology would have been to couch those references in such a way as to have the best chance of being correctly understood hundreds or thousands of years later. A technique that lent itself to this requirement was that of a metaphor, by which we frame a concept we know a person might not understand in relation to one that is more familiar to them. The Dogon understand that the act of teaching a person is not always a simple task because it can meet with resistance. In the Dogon view efforts to convey knowledge often require us to “tug against a thing that pulls back”--in their mind, like pulling on wild grass. It is in this sense that the Dogon people self-deprecatingly refer to themselves as “wild grass, acknowledging that it may simply be human nature to resist instructed knowledge.” Even for a modern person the essential experience of arriving at some new bit of cosmological knowledge is often a kind of bemusement over how very dense we were about grasping some seemingly obscure concept that now seems perfectly evident to us.

Precisely because of this seemingly natural human resistance to learning, one of the likely imperatives for those who framed the ancient symbolic system was to find ways to effectively navigate around it. One approach to that would be to prefer the most direct path to an intuitive understanding of any given concept, and thereby bypass the kind of extended lectures that many of us learned to tune out during our own educational experiences. Of course, as any lecturer who has made a PowerPoint presentation knows, illustrating a concept with a related image is one effective way to do that. Using a short storyline to frame a point is another. Meanwhile, insightful comparisons made through a well-selected simile or metaphor can offer a third way to intuitively convey an idea to a person.

Metaphors are shortcuts to new understanding in that they exploit the benefit of things we already know. For that reason, a metaphor is most effective when it resonates with the experience of the person for whom it is devised. A well-chosen metaphor has the potential to convey a complex idea in a direct and insightful way, simply by positing that one thing can be understood to be intimately like another. With the best metaphors, understanding can be immediate and intuitive. However, if the comparison at the basis for the metaphor ultimately falls outside of the experience of the person for whom it is intended, then the knowledge to be conveyed will also ultimately miss its mark. So skill at formulating and expressing ideas through a careful choice of metaphors becomes one of the hallmarks of an excellent teacher.

In the case of ancient mythical teachers who knew they might well be distanced from their intended audience by thousands of years, selecting the proper metaphors may have seemed problematic, since there could be no certainty as to which ones would be likeliest to resonate with some imagined future recipient. To allow for this, metaphors of the symbolic tradition were commonly rooted in elements of the natural environment that are not prone to change quickly and therefore should likely continue to be experienced by people in the much the same way over a very long span of time. And so the natural effect of wind, which constitutes a universal effect, became a surrogate for the concept of vibration, while water references, which are also universal, convey the notion of ripples and of waves. Raindrops from a cloud familiarly illustrate the idea of multiplicity from unity. As is more directly demonstrated by the previously-mentioned Buddhist concept of the adequate symbol, elements that inhere in nature can be counted on to remain constant in the human experience and so provide an excellent basis for cross-generational metaphors. Additionally, many of the meanings of the cosmology are expressed redundantly in relation to more than just a single metaphor, both as a way to confirm an intentional meaning and perhaps in the hope that at least one of the chosen metaphors might resonate better than another with an uncertain future audience.

The concept of a metaphor, itself, is also leveraged within the symbolic cosmology, perhaps in keeping with the broad range of symbols that the system comes to encompass. The system defines a range of four-stage metaphors, modeled after the same pattern as the familiar primordial elements: water, fire, wind, and earth. These staged metaphors are intuitive in that many of them reflect progressions that can be readily observed in nature, such as the growth of a plant from a seed or the evolution of a mature bird from an egg. That approach to symbolic expression accustoms an initiate both to the technique of conceptualizing a complex process in stages and to resolving complex issues by breaking them down into smaller, more manageable units. If we take these four-stage metaphors as effective categories for the multiplicity of symbols themselves, then the metaphors make it possible for us to place a related set of progressive symbols into proper sequence with one another. For example, the sequence of water, fire, wind, and earth allows us to infer that any cosmological reference to “waves” must correspond to a process that falls at the early formative end of the scale of material creation, while those to “earth” properly belong at the culminating end.
Laird Scranton

Laird Scranton is an independent software designer who became interested in Dogon mythology and symbolism in the early 1990s. He has studied ancient myth, language, and cosmology since 1997 and has been a lecturer at Colgate University. He also appears in John Anthony West’s Magical Egypt DVD series. He lives in Albany, New York.

“An engrossing and informative book, Primal Wisdom of the Ancients puts the reader in front of a coruscating kaleidoscope of context with the turn of each page. Rather than research more evidence for cultural diffusion, Laird Scranton takes a refreshing approach from his already opulent opus and successfully amalgamates the purpose underlying the patterns and principles perpetuated by the primordial tradition. This book is not only a valuable contribution to the study of comparative cosmology but also serves as an initiation into the greater mysteries of the esoteric tradition. The only ritual required for the initiate to perform is to read it!”

“Primal Wisdom of the Ancients is fascinating in Laird Scranton’s descriptions of the parallels of the cosmologies of diverse cultures throughout the ancient world and the contemporary Dogon culture. His descriptions open the door to a deeper understanding of the evolution of our cosmological consciousness.”

Primal Wisdom of the Ancients

The Cosmological Plan for Humanity