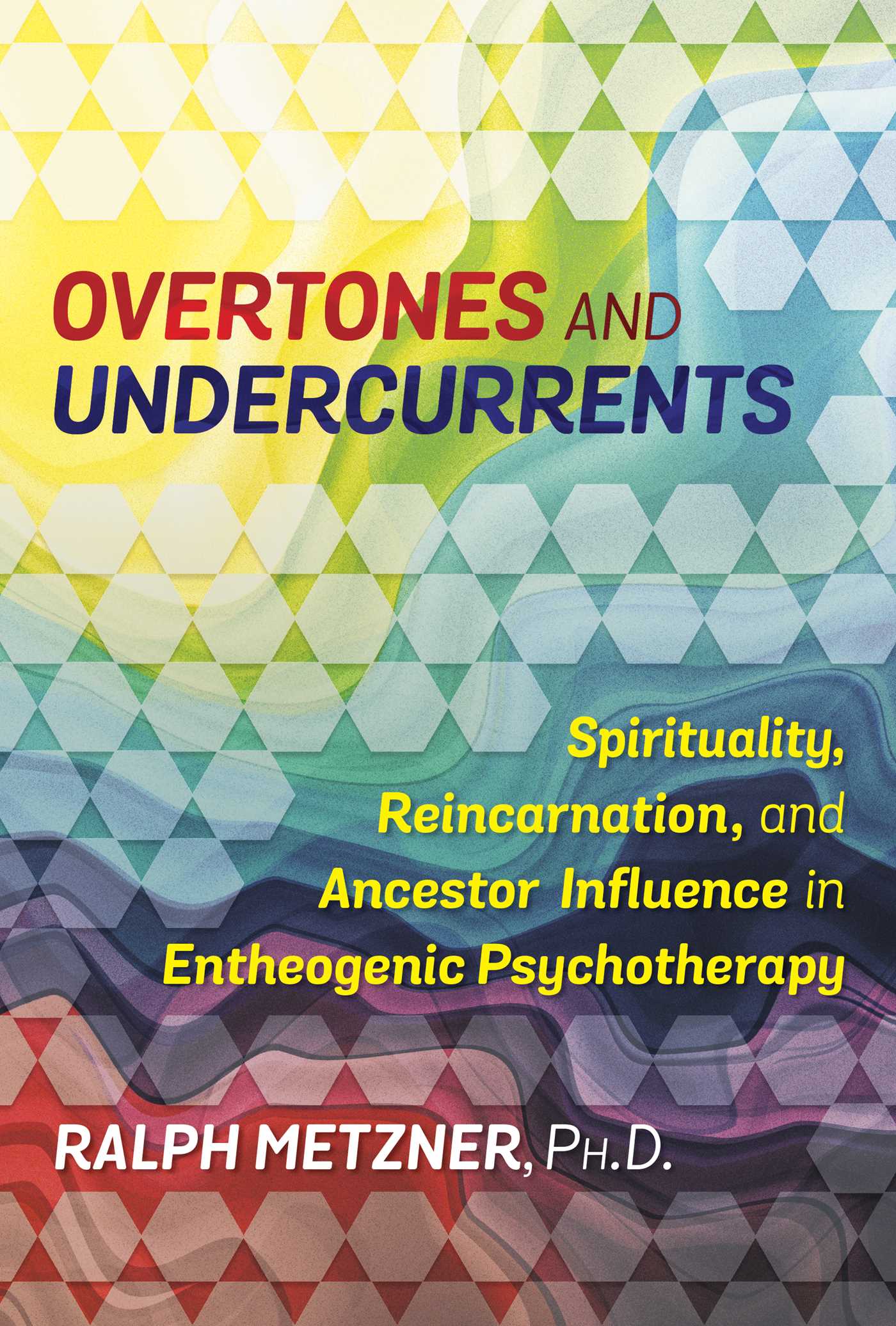 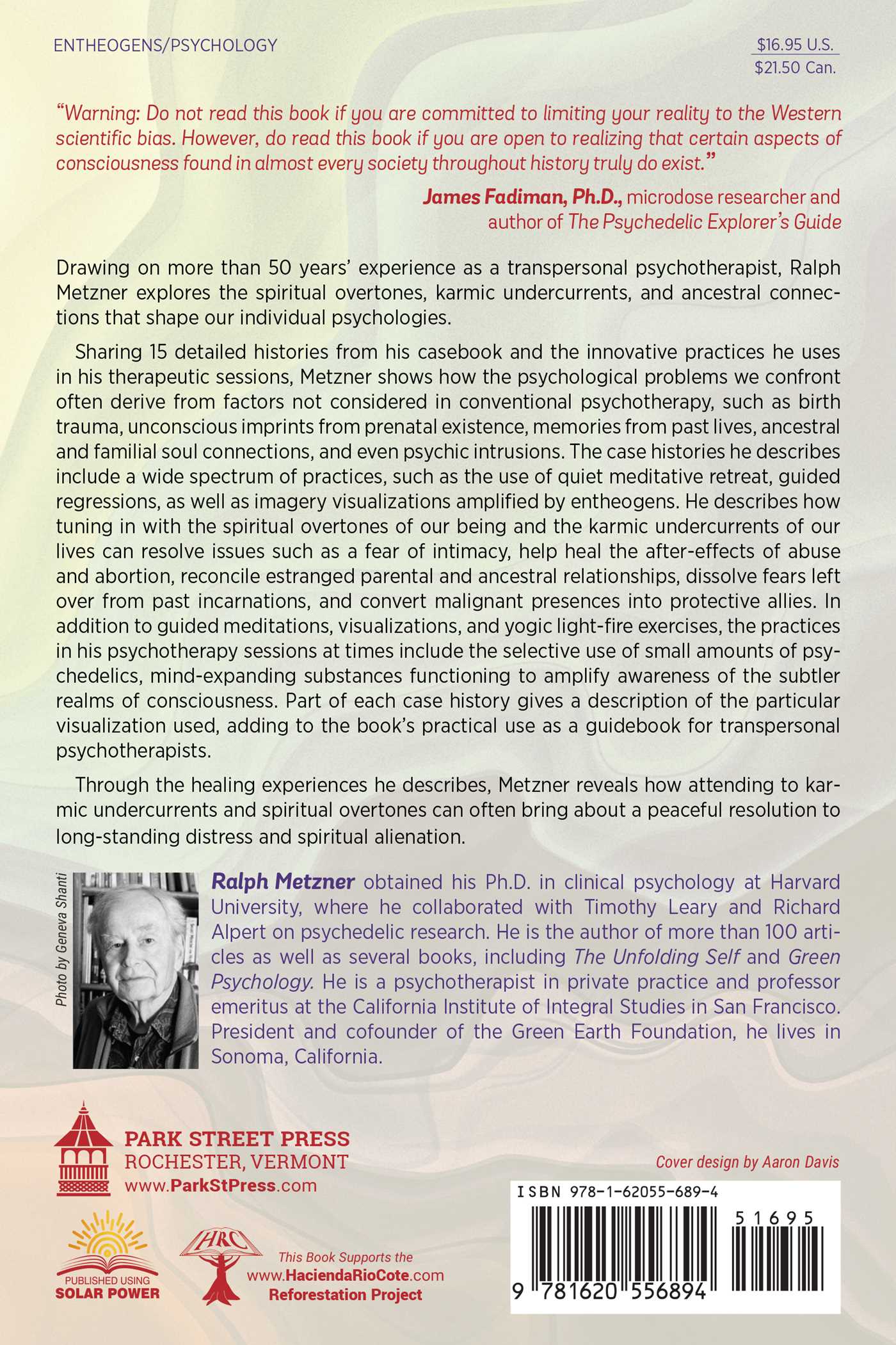 • Shows how psychological problems often derive from factors not considered in conventional psychotherapy, such as prenatal imprints and ancestral connections

• Describes how guided imagery meditations, yogic light-fire practices, and selective use of entheogenic substances can be integrated with transpersonal psychotherapy and bring about deep healing

Drawing on more than 50 years’ experience as a transpersonal psychotherapist, Ralph Metzner explores the spiritual overtones, karmic undercurrents, and ancestral connections that shape our individual psychologies.

Sharing 15 detailed histories from his casebook and the innovative practices he uses in his therapeutic sessions, Metzner shows how the psychological problems we confront often derive from factors not considered in conventional psychotherapy, such as birth trauma, unconscious imprints from prenatal existence, memories from past lives, ancestral and familial soul connections, and even psychic intrusions. The case histories he describes include a wide spectrum of practices, such as the use of quiet meditative retreat, guided regressions, as well as imagery visualizations amplified by entheogens. He describes how tuning in with the spiritual overtones of our being and the karmic undercurrents of our lives can resolve issues such as a fear of intimacy, help heal the after-effects of abuse and abortion, reconcile estranged parental and ancestral relationships, dissolve fears left over from past incarnations, and convert malignant presences into protective allies. In addition to guided meditations, visualizations, and yogic light-fire exercises, the practices in his psychotherapy sessions at times include the selective use of small amounts of psychedelics, mind-expanding substances functioning to amplify awareness of the subtler realms of consciousness. Part of each case history gives a description of the particular visualization used, adding to the book’s practical use as a guidebook for transpersonal psychotherapists.

Through the healing experiences he describes, Metzner reveals how attending to karmic undercurrents and spiritual overtones can often bring about a peaceful resolution to long-standing distress and spiritual alienation.

Vicissitudes of the Soul on the Journey to a Human Birth

Susan, a woman in her fifties, came to one of my workshops and asked to work with the process called Healing Relations with the Unborn. She related the following story of an abortion she had undergone as a young woman, with lingering painful after-effects.

I had been out of MBA school for about a year and was enjoying my first job. At a party I attended with my roommate Cindy I met a darling guy named Chuck. We connected immediately and started dating. He was the first person I had ever fallen in love with; so much so, that I fully opened myself to him. Although I was very responsible about birth control and had the most cutting-edge IUD in place, within a couple of months I was pregnant.

During the same week that I found out I was pregnant, I was also promoted to a position that would require monthly travel to New York City. My first trip was to be in two weeks. There was no question in my mind what I had to do. First, my parents would totally freak out if they knew I was pregnant. And second, it would really impact my ability to step up to the responsibilities of my new job. So without considering any other options, I scheduled an abortion. Abortion had only been legal in the US for a couple of years and I was a huge proponent of a woman’s right to make this choice if she felt this was best for her. I let Chuck know about the pregnancy and what I was going to do. After recovering from the shock, he was supportive.

The day before Thanksgiving in 1976, my roommate Cindy took me to get the abortion. It was a horrible experience! It felt like the life force was being sucked out of me. Afterwards, I started having a lot of emotional issues that went untreated. I innately knew that the child had been a boy and I kept talking about him. Chuck couldn’t handle it and about five months later broke up with me. That made it even worse. It wasn’t until I got with the man I married that I began to start processing the pain of this experience out of my system. But even after thirty years, there was still lingering pain, grief, and guilt surrounding this choice I had made. When Ralph said we were going to work with healing the after-effects of abortion, all my systems went on high alert.

In preparation for the healing process, we first did a light-fire meditation focused in the heart-center and invoked the ancestors and guiding spirits of all the people involved. When circumstances permitted, small amounts of entheogenic substance would also be used during this process to amplify perception and bring about new insights and understandings. We invoked the triad consisting of the connected souls of mother, father, and unborn (aborted) child. All three members of this sacred triad, along with myself as the guide, formed a cross of light that connects all participants with enlightened awareness and empathy.

I then suggested that Susan ask the aborted child’s gender--which she had already intuited was a boy. I suggested that, once the contact is made, the parent soul ask the aborted child soul if it is holding any negativity or judgment about the abortion. I have guided and assisted such a process many times and without exception I have found that the unborn souls do not hold a grudge--they seem to come from a place that recognizes life in a human body as a temporary embodied phase in the infinite existence of an immortal soul. Recognizing this truth in the oneness of the three immortal souls, allows the person to forgive themselves at the personality level--a process that the souls involved, in their beingness beyond time, have long completed.

In our divination process, I then asked Susan to say, either inwardly or out loud, repeating after me, the following statements, addressing the soul of the child that was not born. I accept you now as my child, and you may have me as your mother (or father). I am sorry that it didn’t work out. I am giving you now and holding for you always a place in my heart. Bert Hellinger, from whose work in family constellation therapy I adapted these statements, calls them “statements of empowerment.” They affirm the reality of the soul connection while acknowledging the grief and guilt at the personal level.

Susan wrote me in a letter afterwards that

I was about half way through internally saying these things, weeping all the while, when a young man’s voice stopped me. He said, ‘Hello, my name is Rob. It is OK, Susan. My contract was not with you. I am with Dad.’ I was overjoyed to have finally connected directly to this being that I had carried inside of me and to know that he was OK. It was very healing and meaningful to me. But I was somewhat confused over his statement. Chuck had kept in touch periodically over the years and I knew he did not have a child named Rob. So what could this mean? It wasn’t until several years later, when he and I were talking, that the truth was revealed. Chuck was sharing with me aspects of his life, telling me about his third wife, Patty, and he mentioned that he was very close to one of her sons. He then said ‘his name is Rob.’ I was floored but had the sense to ask about Rob’s age and date of birth. Rob had been conceived by Patty and her first husband two months after I had had my abortion. It wouldn’t be until years later that Chuck and Rob would come together to fulfill their father-son contract--whatever that was.
Ralph Metzner

Ralph Metzner, Ph.D., helped found the Harvard Psilocybin Project in 1960 and is now a psychotherapist and professor at the California Institute of Integral Studies in San Francisco. He is the author of many books, including The Psychedelic Experience (with Timothy Leary and Richard Alpert), Maps of Consciousness, Opening to Inner Light, and The Well of Remembrance. He lives in Sonoma, California.

“Warning: Do not read this book if you are committed to limiting your reality to the Western scientific bias. However, do read this book if you are open to realizing that certain aspects of consciousness found in almost every society throughout history truly do exist. The moving and well-told case histories and short flashes of therapeutic breakthrough illustrate clear benefits of going beyond the Western paradigm. Without preaching or scolding, Metzner gives example after example of how much more a therapist can accomplish using tools developed and refined by other cultures. Better yet, Metzner describes the tools in full detail and how he uses them so that we are not only enlightened but empowered. Reading this book will loosen your own boundaries, let you reflect on the practical value of opening up to other realities, and surprise you with how easily and how quickly people can dissolve previously intractable pathology when guided to accessing and using altered states.”

“A most welcome addition to the highly influential and gifted scholarship of Ralph Metzner’s vibrant life work. This erudite set of well-documented case studies profoundly illuminates the empowerment and healing to be evoked through a masterful weaving of psychedelic medicines, invocations, and divinations. As a genius alchemist of consciousness, Metzner successfully challenges erroneous accepted worldviews with insights into both how karmic undercurrents of suffering persist across generations and how close we are to healing through the powerful practices he has developed and deftly illustrated here. So potent are these insights, the reading of this visionary book is an act of receiving the vital medicine it describes.”

“Legendary transpersonal psychologist Ralph Metzner’s deeply compelling, page-turning stories will keep your eyes glued to this one-of-a-kind book. Metzner writes with great clarity, insight, and profound knowledge. This book provides the instructions for re-creating the alchemically transformative, conscious-altering explorations that reveal possible influences from past incarnations and ancestral spirits. Metzner recounts 15 thought-provoking case histories that will surprise and instruct the curious mind as well as help those in need of psychotherapeutic assistance. With its abundance of rare knowledge, this extraordinary book can help to put much unexplained phenomena into perspective, so as to become more comprehensible, more manageable, and to help facilitate a deep healing process.”

“Ralph Metzner draws on his intuitive understanding of the subtleties and varieties of psychedelic experience as he recounts these very human stories of spiritual healing and family reconciliation across time and space.”

“Ralph Metzner is a modern Western medicine man. His knowledge in his extraordinary stories is to be savored again and again, encouraging us to become spiritually aroused. In a larger sense, Metzner is a spiritual statesman. . . . You will enjoy this wonderful book, and your soul will be immeasurably enhanced in response.”

– Hank Wesselman Ph.D., anthropologist and author of The Re-Enchantment

“Ralph Metzner has done it again! Each of his books expands the domain of human knowledge and explores neglected aspects of human potential. In Overtones and Undercurrents, he tells his readers what he has discovered as a psychotherapist who incorporates psychedelics, reincarnation, and spirituality into his work with clients. Each case history reads like a novella; in addition to his skill as a therapist, Metzner is a superb storyteller.”