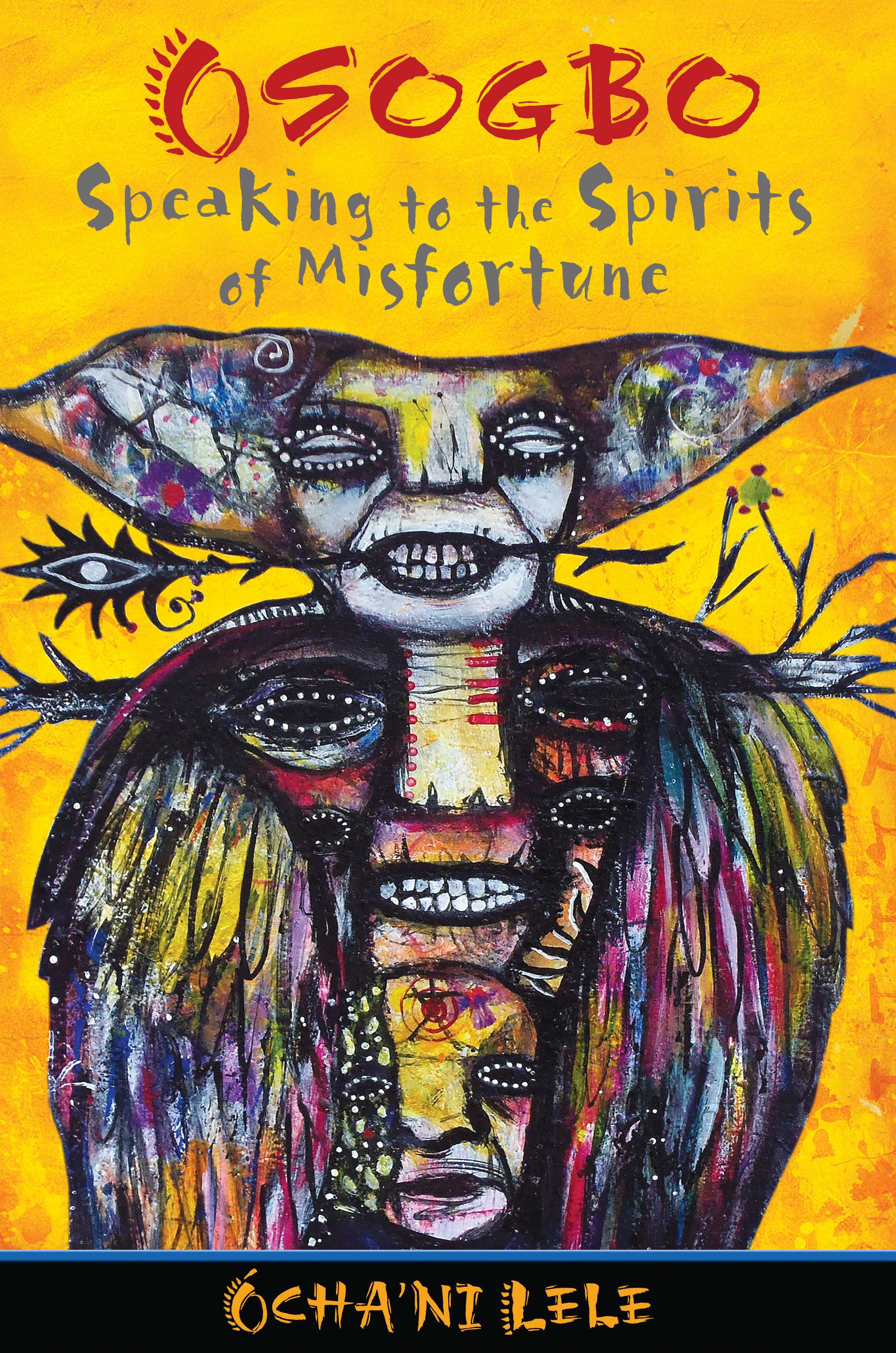 Speaking to the Spirits of Misfortune

By understanding osogbo, the spirits of misfortune, we can better overcome them and return to health and balance in our lives

• Shows that we can overcome osogbo through ebó, sacrifice, and hard work as prescribed by consulting the orishas through the casting of the diloggún

Beginning with the story of his goddaughter's battle with stage IV cancer, Lucumi priest Ócha'ni Lele explains the role of osogbo, or misfortune, in our lives. While everyone seeks blessings in life, undeserved blessings make us weak and lazy. It is tragedy that encourages us to grow and persevere. Exploring the Lucumí beliefs regarding osogbo, he shows that the Lucumí faith is neither fatalistic nor defeatist but healing and life affirming. He shares more than 40 patakís--stories stemming from the ancient Yoruba of West Africa--about the different spirits of osogbo, who like the orishas once walked the earth in human bodies. He explains the place of these spirits within the 256 odu of the diloggún, the divination system used in Santería to receive guidance from the orishas.

Lele shows that the spirits of osogbo are not only concepts but also real deities and that we can, if we understand their nature, fight them through ebó, sacrifice, and hard work. He reveals how the osogbos see themselves as entities of misfortune who stand against life and all that is good in the world, but in truth it is misfortune that strengthens us, misfortune that motivates us, and misfortune that brings great evolution to the world. As the author shows, “Without bitterness, one could not know sweetness.” Likewise, without misfortune in our lives, we would never know blessings or what it means to be blessed.

As noted earlier in this book, there was a time when life was simple: there was Iré, the spirit of blessings, and there was Osogbo, the spirit of misfortunes, and the two (who were twins) took turns ruling over the earth. Neither was satisfied with such a simple arrangement; and a war began between brother and sister. So heated was the war that Olófin became involved; and in the end, Osogbo was named the greater of the two. Osogbo made ebó (sacrifice); and she gave birth to sixteen spiritual principles known as the osogbos. Some of these wanted children themselves, and they made ebó. Soon creation was filled with multiple entities bringing various misfortunes to the world, and Iré, the spirit of blessings, became lazy. He preferred to rest and sleep, oblivious to his family’s workings. Know that a blessing is a simple creature, but misfortunes in the world are legion. Add to this the complication of humans. There are seven billion people on the earth, and each orí (head) has its own perception of the world in which it lives and moves. Each of these seven billion heads has its own orí-inu (inner head) in which every person’s individual destiny is found.

The concept of destiny seems almost fatalistic; and many believe that the concept of destiny denies free will and personal choice. This, however, is anathematic to Lucumí ontology and metaphysics. Dr. Oladele Abiodun Balogun, in a paper published by Nordic Journal of African Studies titled “The Concepts of Orí and Human Destiny in Traditional Yoruba Thought,” insists that while orí, specifically orí-inu, contains a destiny to which we agreed before becoming flesh, the road we take to that destiny or how we achieve that destiny is left up to free will and human choice. One way to illustrate the concept is this: choosing an oríinu is the cause, and incarnation in the flesh is the effect; and incarnation again becomes a cause for us to live and seek out our destiny. Often, osogbo stands in our way.

No orisha, not even Olódumare, can provide a blessing if one’s orí does not agree to that blessing. Likewise, no orisha, not even Olódumare, can cause misfortune to exist in one’s life if one’s orí does not agree with that misfortune. During the course of a human’s life he will encounter successive misfortunes, events that will either propel him closer to his destiny (because osogbo is a principle that can assist human evolution) or move him further away from his destiny (because osogbo’s goal is, ultimately to crush the human spirit). Orí is integral to whether various misfortunes come into our lives; without agreement from the head, osogbo cannot afflict us. In spite of this, how a human acts or reacts to osogbo is an issue of free will. If destiny was hardwired into the human experience, there would be no force under heaven that could move an individual away from his destiny.

Still, living in ayé (the material world) is enough to guarantee that at some point everyone interacts with osogbo. Our lives themselves are the causes of blessings and misfortunes. To live is to guarantee migration between the two extremes. . . . Being human is, in itself, enough to attract misfortune to one’s life. The manner in which humans live call these forces down from heaven into the earthly realm.

In the Lucumí faith, when life becomes harsh, intolerable, or when one seems to suffer one affliction after another, the adherent seeks out a diviner to determine what is happening in his life. He seeks out one of the many oracles we have at our disposal to learn what is going on spiritually, behind the scenes, making life too harsh or intolerable. With these oracles--Ifá (accessed by the babalawo), diloggún (accessed by the olorisha), and obi (accessed by the aborisha, olorisha, or babalawo)--we consult with egun, the orishas, and Olódumare for guidance. The use of divination also brings into play iporí (our true selves in heaven) and oríinu to determine if we are on the road to attaining our destiny in life or if we are far off course. We learn the will of heaven as the oracles are opened and accessed. Controlling these oracles; indeed, controlling even the interaction of iré and osogbo in this world, is the orisha Elegguá.

Osogbo destroys--this is a central truth of its action in nature; however, it only destroys that which is weak. Whether we call osogbo into our lives by our actions or Elegguá unleashes osogbo on us at his whim, it is both a test and a cleansing, and only that which is strong survives. Osogbo, then, becomes a cleansing force in nature. That which does not kill us makes us stronger. One of Osogbo’s functions is to improve and strengthen both the material world and the creatures living in it.

When studying iré, osogbo, and their interactions among humans and orishas, it is important to understand that the gate between heaven and earth is not simply a gate; the gate is Elegguá. He is the orisha who creates the divide between heaven and earth. Likewise, Elegguá is the gate that stands between orún burukú (the bad or depraved side of heaven) and orún (the good side of heaven); and he allows the passage of osogbo into all realms at will. This is a power he obtained in the odu Unle Meji (8-8) in the diloggún.
Ócha'ni Lele

“Finally we have an author willing to serve up the spiritual beauty of ancient Africa at the table of the modern world. Clearly, there is a legacy beginning to unfold.”

“Once again, Ócha'ni Lele has demonstrated his masterful grasp of an often confusing subject with clarity, compassion and wisdom; a must-read volume sure to be eagerly studied by newcomers and elders alike for generations to come. As Lydia Cabrera is to Palo Mayombe, Ócha'ni Lele is to Lucumi.”

“I loved Osogbo. I don’t say that often, or lightly; to earn such praise a book has to open up a whole new world for me, to change my point of view, to teach me something I can use daily. This is such a book. When misfortune visits your house and you wonder why, you may find enlightenment and comfort in the pages of his book. You will, if nothing else, find a great teacher.”

Speaking to the Spirits of Misfortune