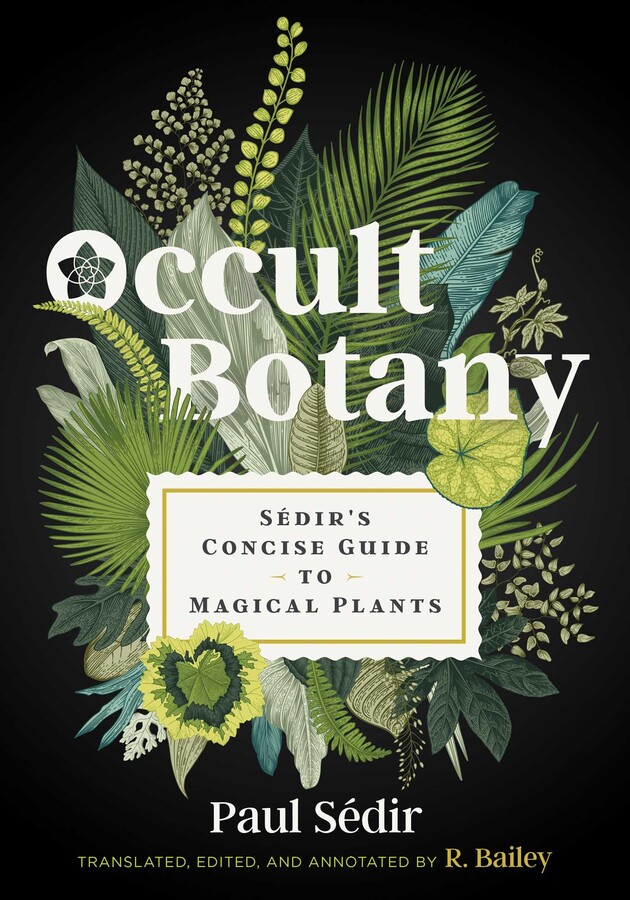 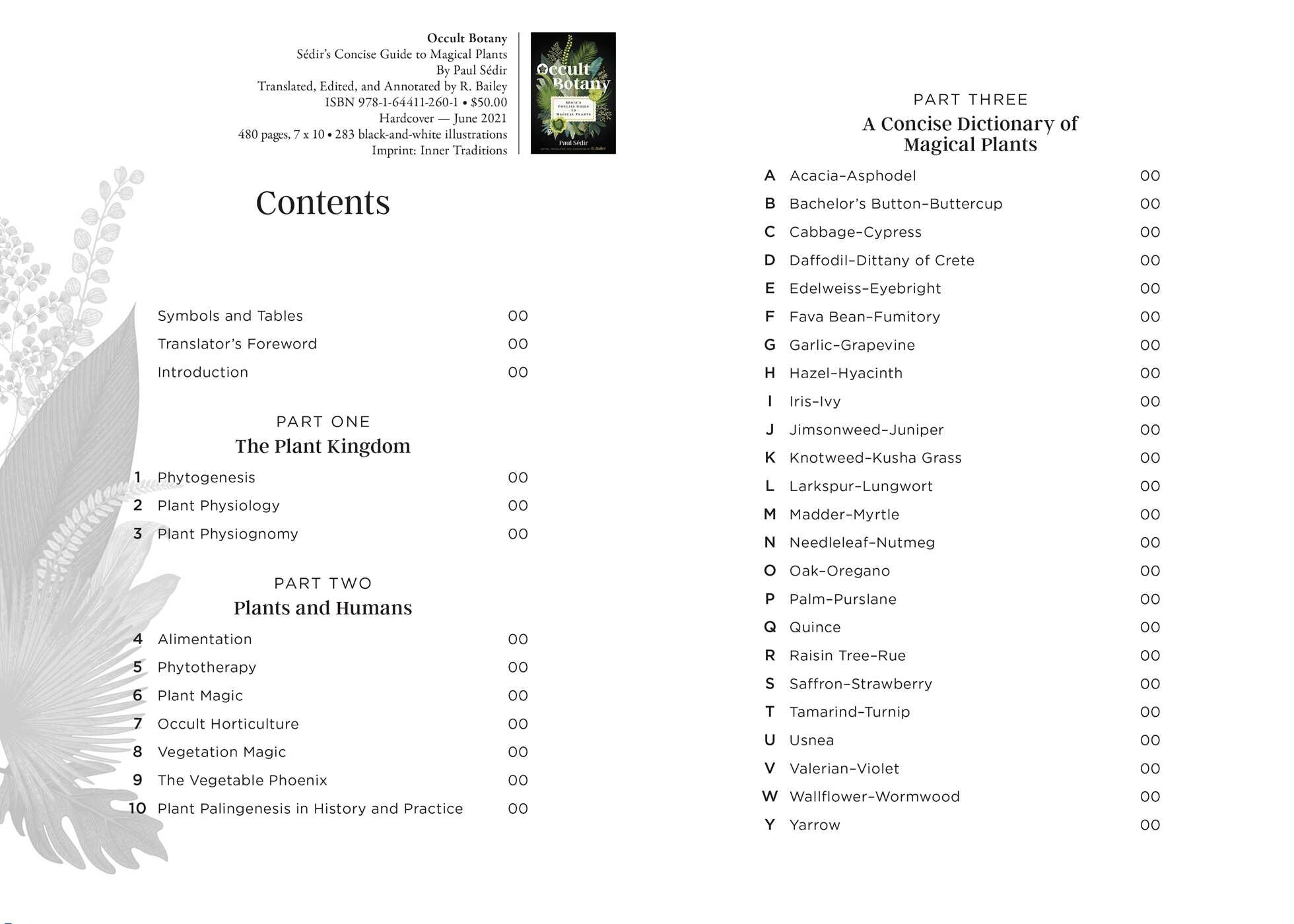 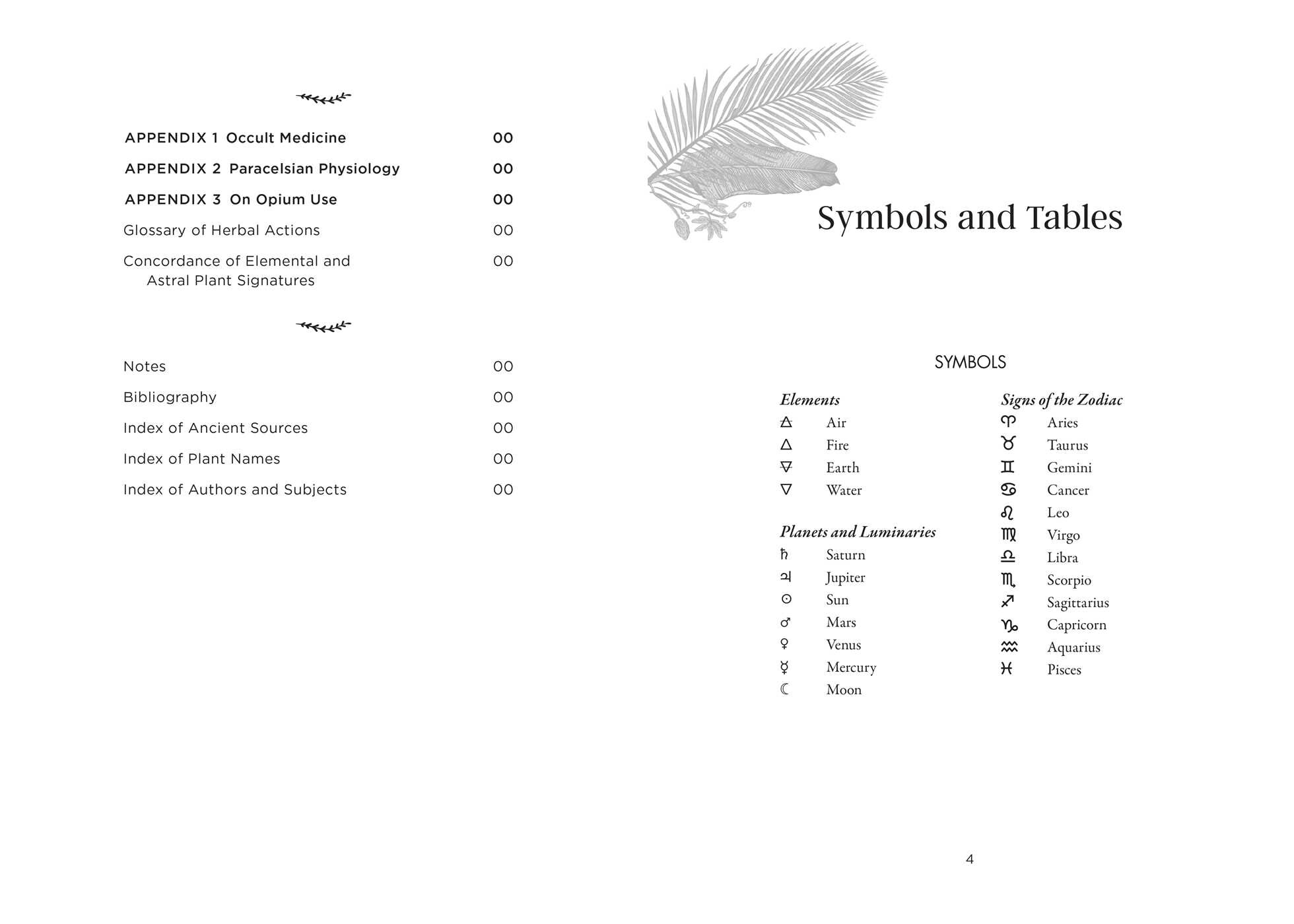 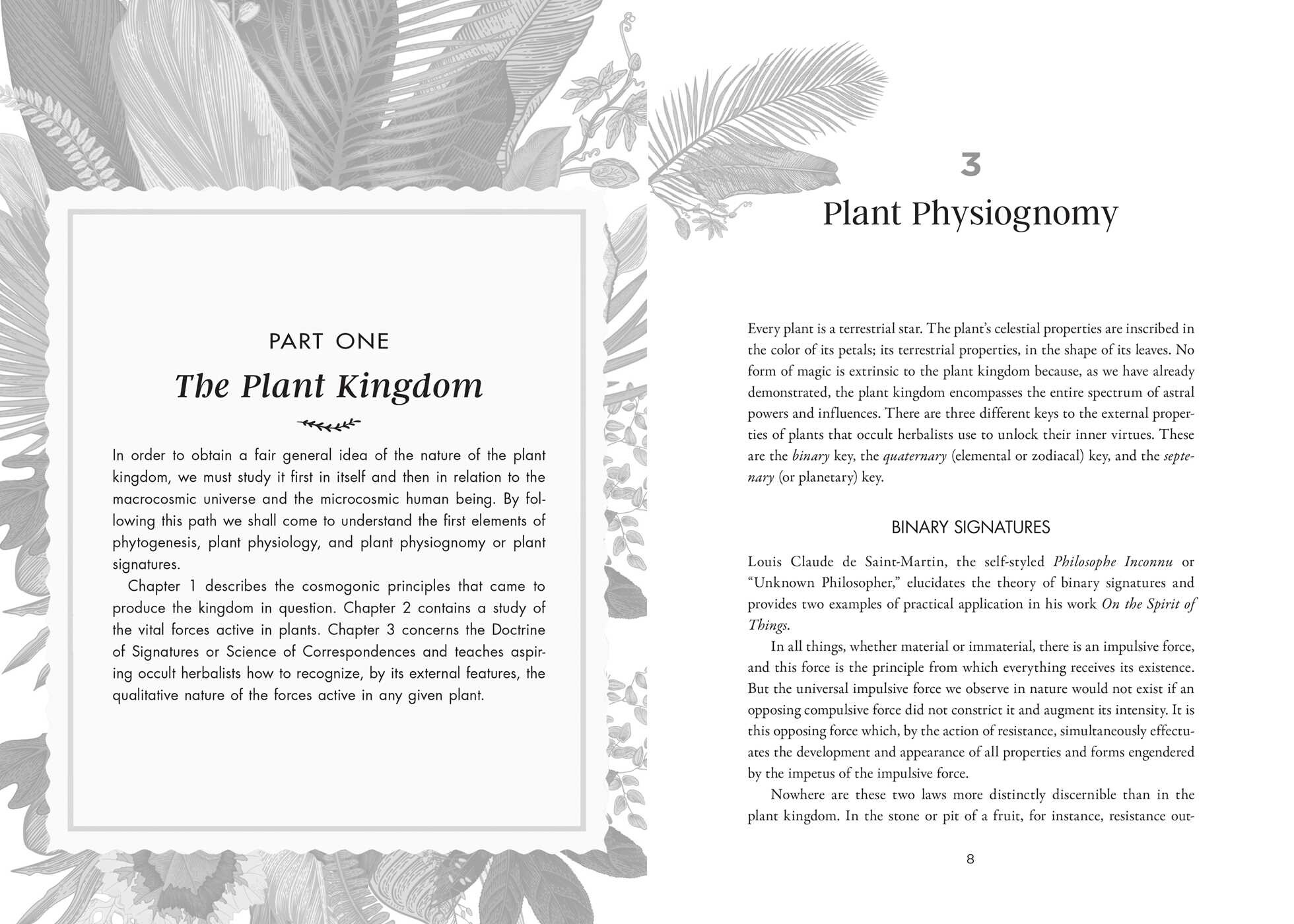 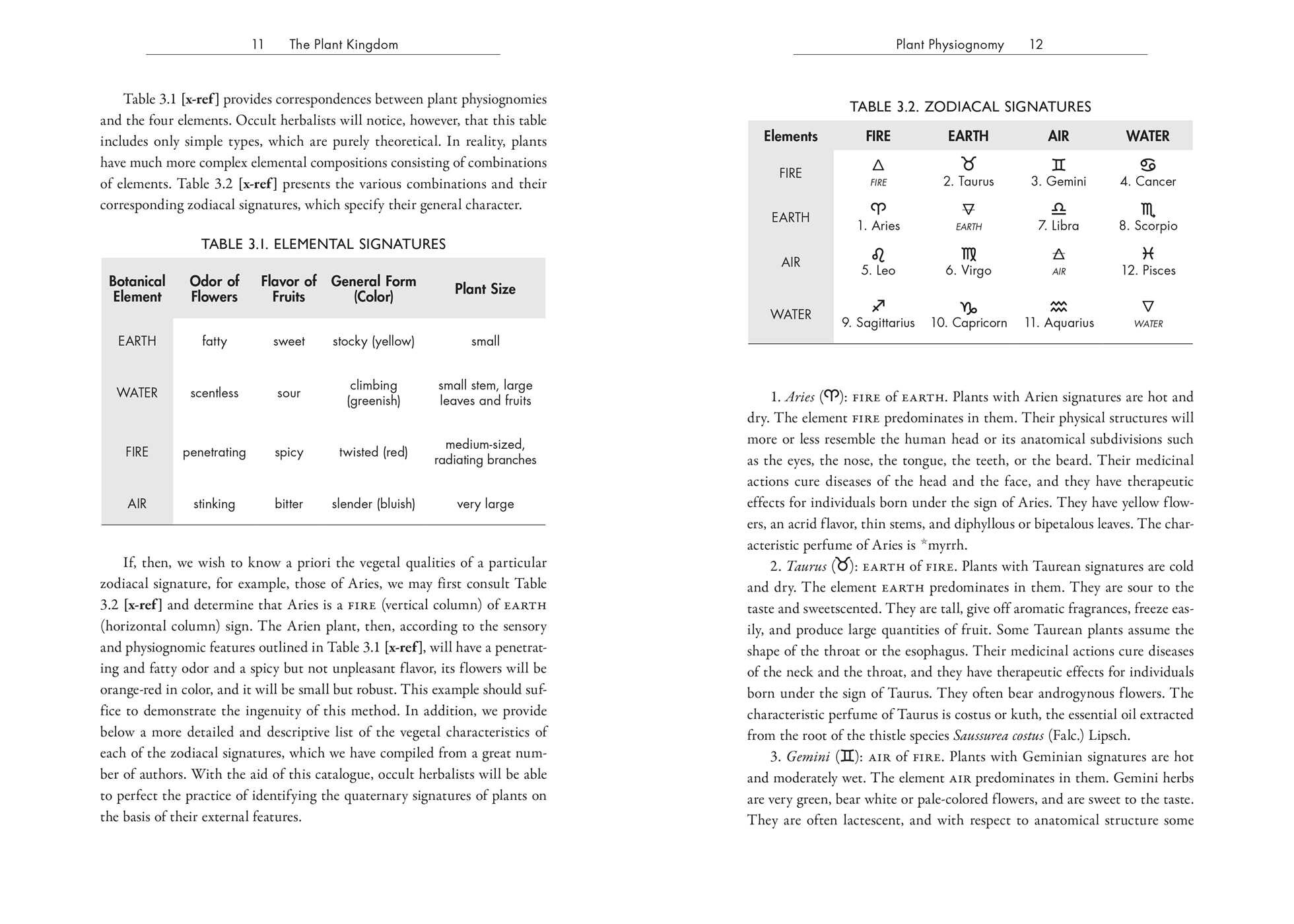 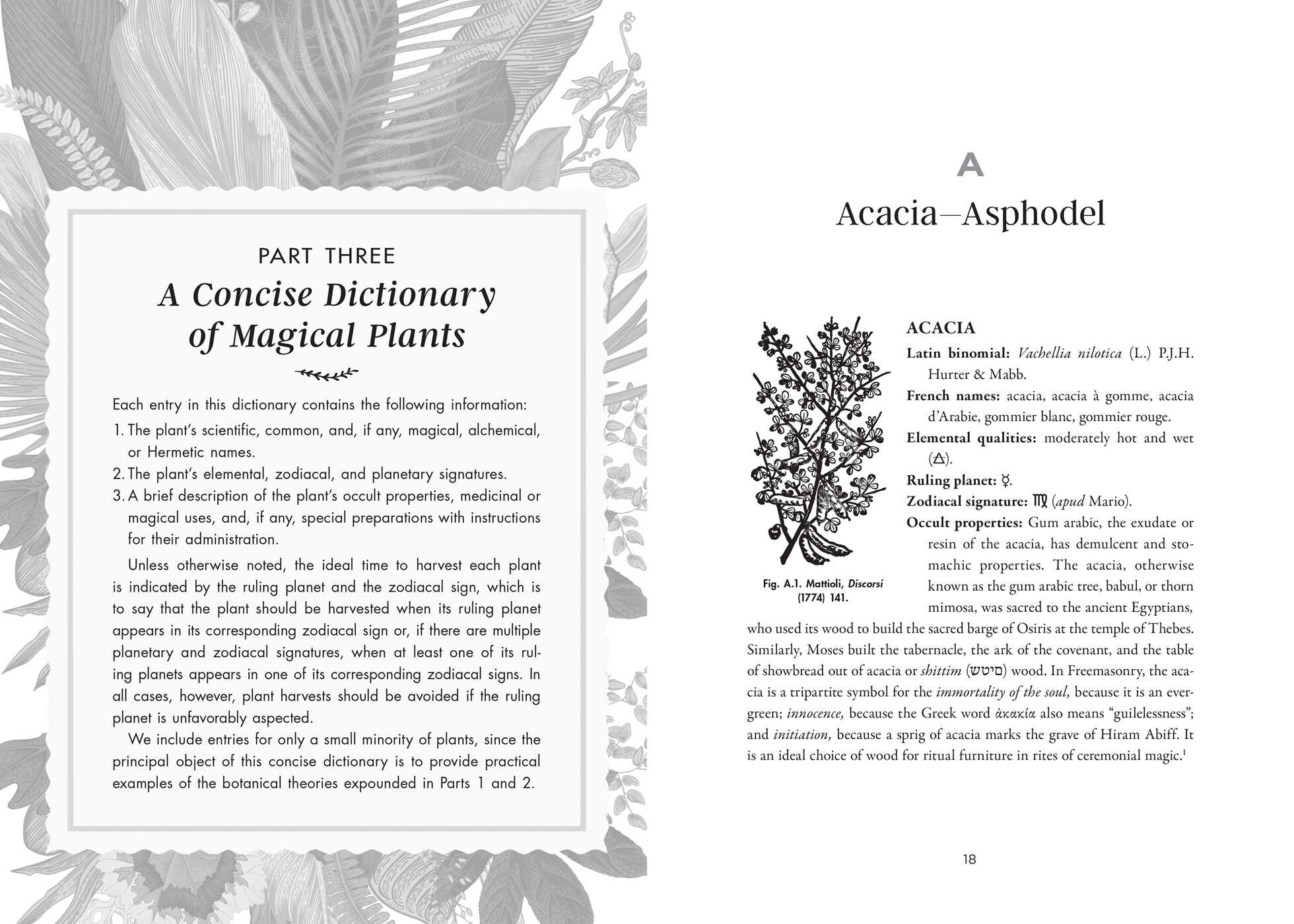 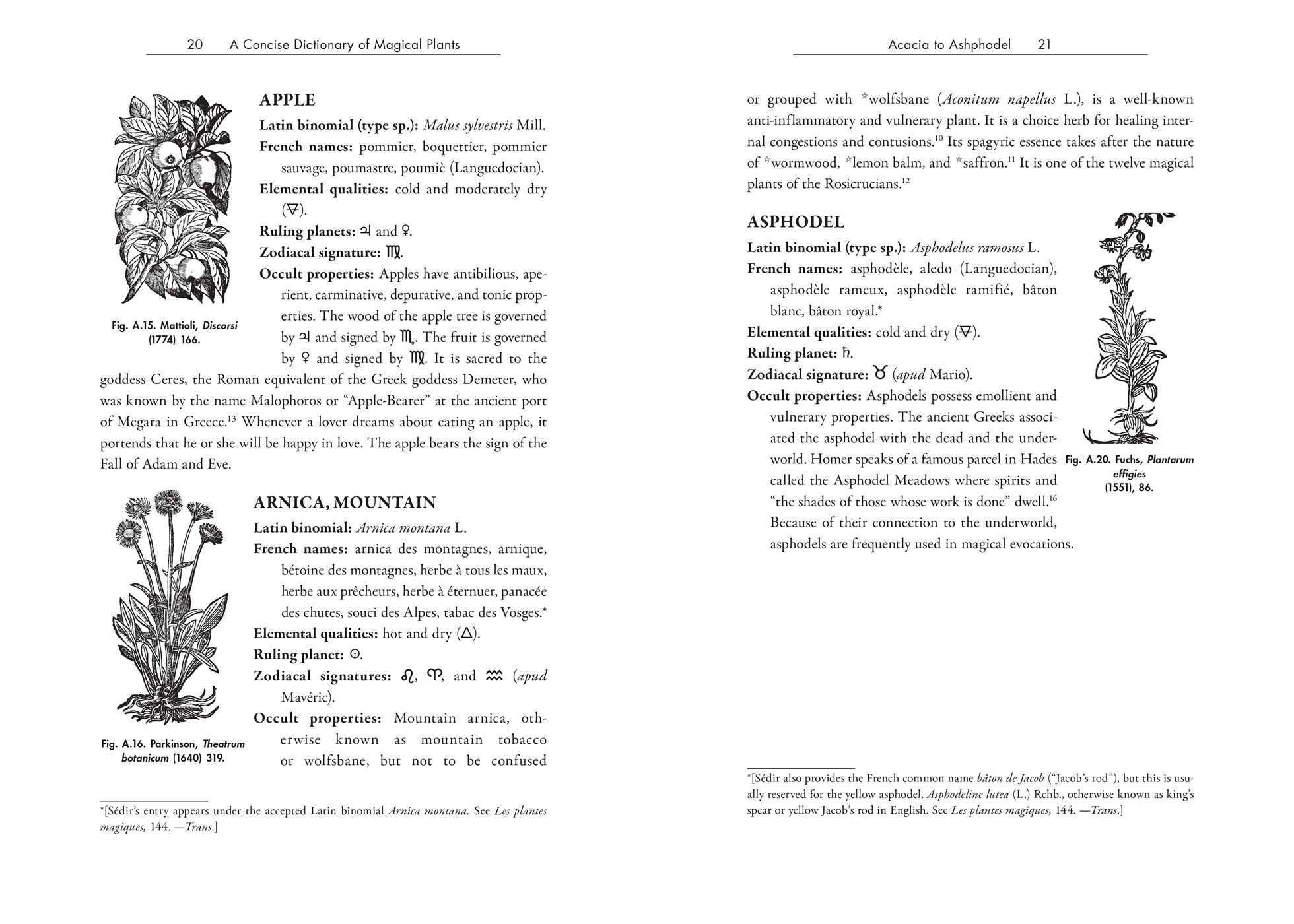 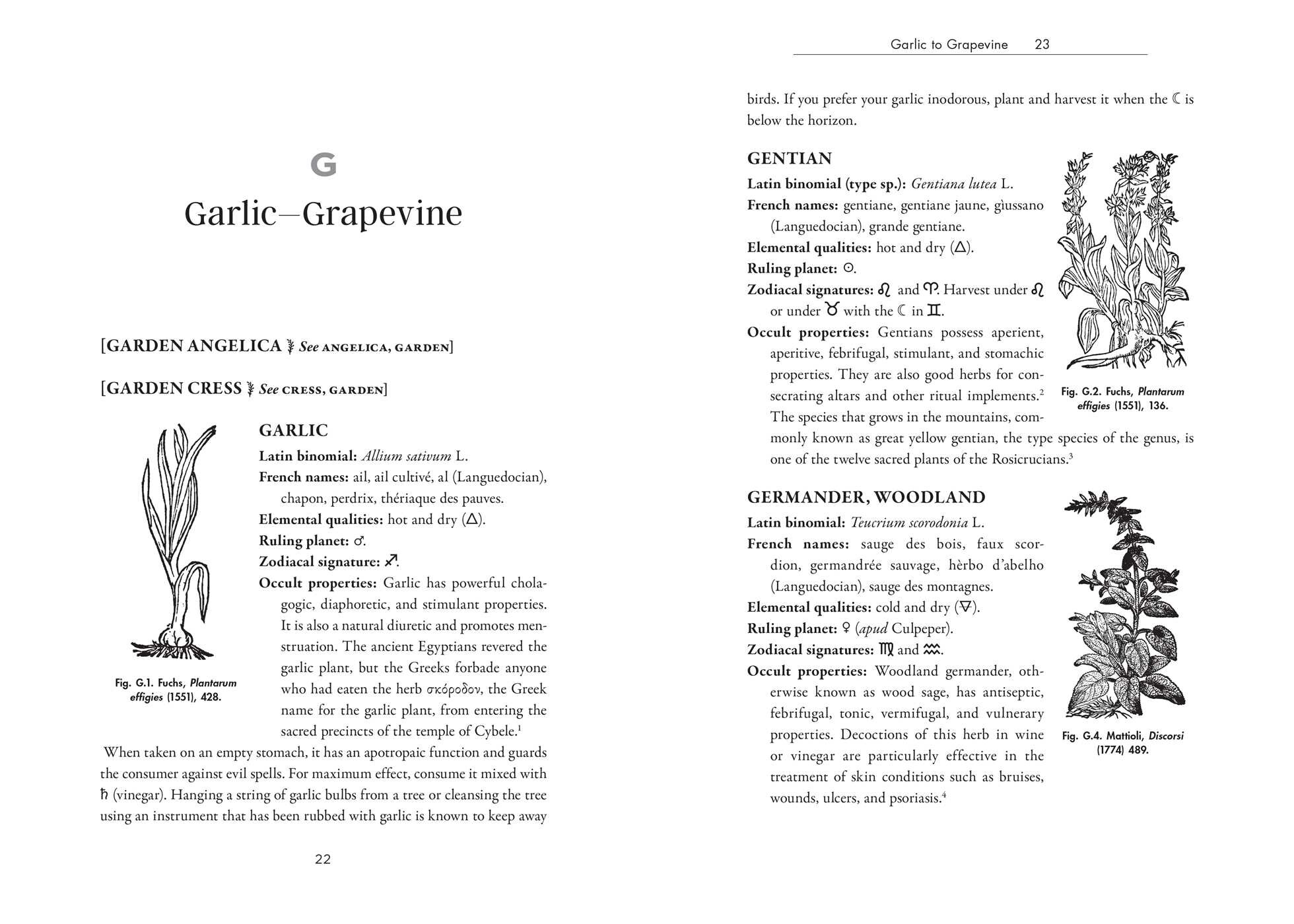 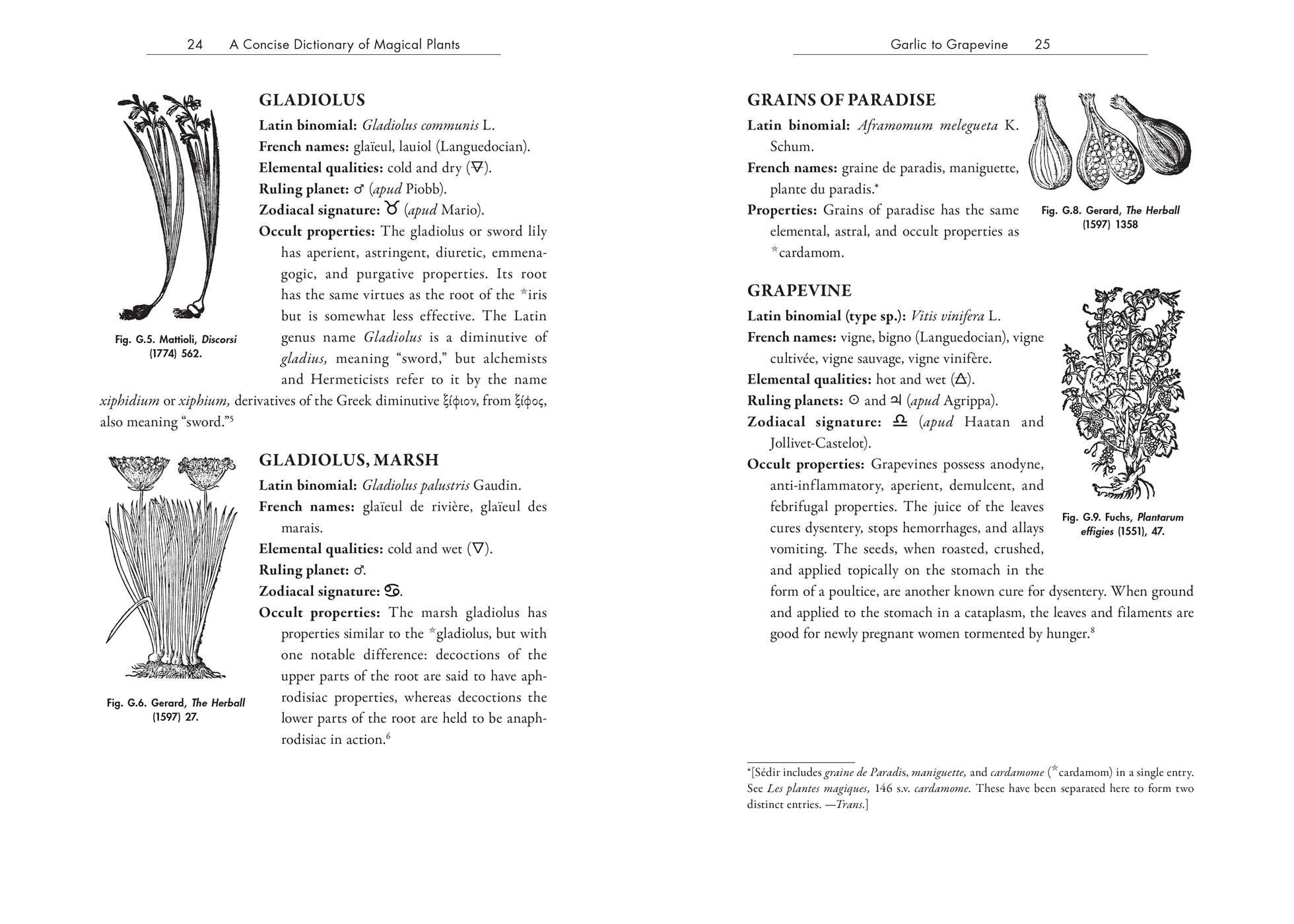 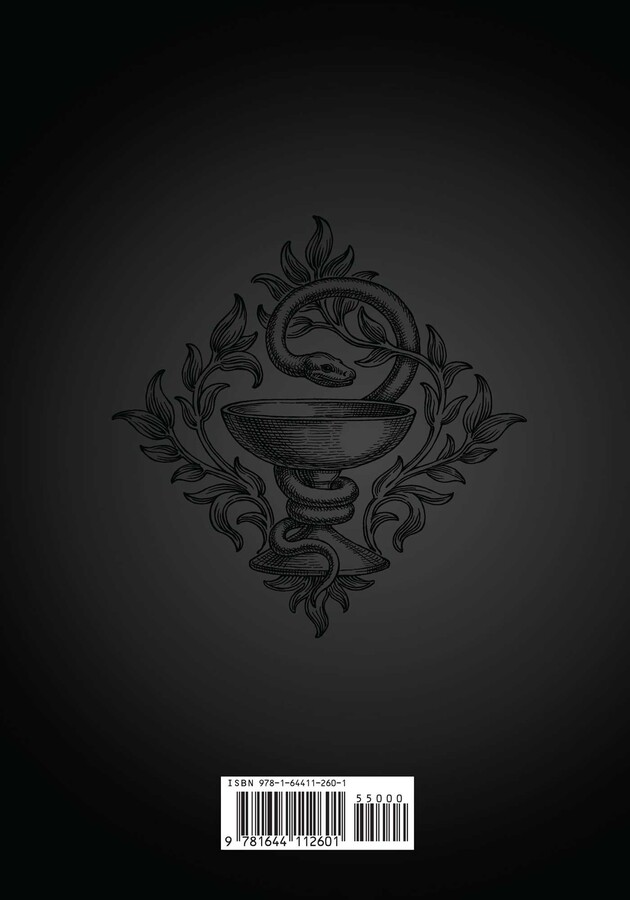 • Includes a dictionary of nearly 300 magical plants with descriptions of each plant’s scientific name, common names, elemental qualities, ruling planets, and zodiacal signatures, with commentary on medico-magical properties and uses

• Explores methods of phytotherapy and plant magic, including the Paracelsian “transplantation of diseases,” ritual pacts with trees, the secret ingredients of witches’ ointments, and the composition of magical philters

• Explains the occult secrets of phytogenesis, plant physiology, and plant physiognomy (classification of plants according to the doctrine of signatures)

Merging the scientific discipline of botany with ancient, medieval, and Renaissance traditions of occult herbalism, this seminal guide was first published in French in 1902 as a textbook for students of Papus’s École hermétique and sparked a revival in the study of magical herbalism in early twentieth-century France.

Author Paul Sédir, pseudonym of Yvon Le Loup (1871-1926), explains the occult secrets of phytogenesis (the esoteric origin and evolutionary development of the plant kingdom), plant physiology (the occult anatomy of plants), and plant physiognomy (classification of plants according to the doctrine of signatures). Unveiling the mysteries behind planetary and zodiacal attributions, he provides readers with the keys to make their own informed determinations of the astral properties of plants. Moving from theory into practice, Sédir explores various methods of phytotherapy and plant magic, including the Paracelsian “transplantation of diseases,” the secret ingredients of witches’ ointments, and the composition of magical philters.

In the third section of the book, Sédir offers a dictionary of magical plants that covers nearly 300 plant species with descriptions of their astral signatures, occult properties, and medico-magical uses. Compiled from an array of rare sources and esoterica, this classic text includes a wealth of additional materials and supplemental charts and diagrams drawn from Sédir’s occult colleagues, all of whom adopted and expanded upon Sédir’s pioneering system of plant correspondences.

Every plant is a terrestrial star. The plant’s celestial properties are inscribed in the color of its petals; its terrestrial properties, in the shape of its leaves. No form of magic is extrinsic to the plant kingdom because, as we have already demonstrated, the plant kingdom encompasses the entire spectrum of astral powers and influences. There are three different keys to the external properties of plants that occult herbalists use to unlock their inner virtues. These are the binary key, the quaternary (elemental or zodiacal) key, and the septenary (or planetary) key. . . .

The four elements and the quintessence each correspond to one of our five senses, which is to say that each of these five forms of motion reveals the qualities of objects through the vibration of one of our sensory nerve centers:

1. EARTH corresponds to our sense of smell (to the odor of the plant).

2. WATER corresponds to our sense of taste (to the flavor of the plant).

3. FIRE corresponds to our sense of sight (to the shape of the plant).

4. AIR corresponds to our sense of touch (to the body of the plant).

5. QUINTESSENCE corresponds to our sense of hearing (to the spirit of the plant).

Table 3.1 provides correspondences between plant physiognomies and the four elements. Occult herbalists will notice, however, that this table includes only simple types, which are purely theoretical. In reality, plants have much more complex elemental compositions consisting of combinations of elements. Table 3.2 presents the various combinations and their corresponding zodiacal signatures, which specify their general character.

If, then, we wish to know a priori the vegetal qualities of a particular zodiacal signature, for example, those of Aries, we may first consult Table 3.2 and determine that Aries is a FIRE (vertical column) of EARTH (horizontal column) sign. The Arien plant, then, according to the sensory and physiognomic features outlined in Table 3.1, will have a penetrating and fatty odor and a spicy but not unpleasant flavor, its flowers will be orange-red in color, and it will be small but robust. This example should suffice to demonstrate the ingenuity of this method. In addition, we provide below a more detailed and descriptive list of the vegetal characteristics of each of the zodiacal signatures, which we have compiled from a great number of authors. With the aid of this catalogue, occult herbalists will be able to perfect the practice of identifying the quaternary signatures of plants on the basis of their external features.

1. Aries: FIRE of EARTH. Plants with Arien signatures are hot and dry. The element FIRE predominates in them. Their physical structures will more or less resemble the human head or its anatomical subdivisions such as the eyes, the nose, the tongue, the teeth, or the beard. Their medicinal actions cure diseases of the head and the face, and they have therapeutic effects for individuals born under the sign of Aries. They have yellow flowers, an acrid flavor, thin stems, and diphyllous or bipetalous leaves. The characteristic perfume of Aries is ⛤myrrh.

2. Taurus: EARTH of FIRE. Plants with Taurean signatures are cold and dry. The element EARTH predominates in them. They are sour to the taste and sweet-scented. They are tall, give off aromatic fragrances, freeze easily, and produce large quantities of fruit. Some Taurean plants assume the shape of the throat or the esophagus. Their medicinal actions cure diseases of the neck and the throat, and they have therapeutic effects for individuals born under the sign of Taurus. They often bear androgynous flowers. The characteristic perfume of Taurus is costus or kuth, the essential oil extracted from the root of the thistle species Saussurea costus (Falc.) Lipsch. . . .

Occult properties: Greater celandine has alterative, cathartic, diaphoretic, diuretic, and expectorant properties. It remains one of the best-known folk remedies for jaundice and liver diseases. Paracelsus considered the spagyric essences of greater celandine and lemon balm to be richest in virtue. This “herb of triumph” was sacred to medieval magicians, who gave it the “Chaldean” name aquilaris. According to the Grand Albert, when harvested at the appropriate time and worn as an amulet, it serves as an effective compliment to all magical operations for ensuring success in business and especially in trials, and if placed on the head of patients suffering from a life-threatening illness, it will cause them either to sing, which means they will die, or to cry, which means they will live.

Occult properties: Elderberries possess aperient, diaphoretic, diuretic, and emetic properties. The oil drawn from elderberry seeds or an oil in which its seeds have been infused is beneficial in the treatment of gout. The type of mistletoe that thrives on elderberry trees, especially those that grow next to willow trees, is particularly effective against epilepsy. Their flowers heal erysipelas and burns, their seeds possess sudorific properties, and their bark is good for edema. A small scion picked just before the new Moon of October and cut into nine pieces is also useful against edema, so too the root when pulled from the earth at noon on the feast day of Saint John the Baptist (June 24). Sprinkling a decoction of its leaves around your home kills flies and other noxious insects. In the Hermetic language of flowers, the elderberry is emblematic of zealousness.
Paul Sédir

Paul Sédir, pseudonym of Yvon Le Loup (1871-1926), was a pivotal figure of the fin-de-siècle French occult revival. He was a professor at the École hermétique and Faculté des sciences hermétiques in Paris under the directorship of Papus, his first spiritual mentor. He practiced magic with the alchemist Albert Poisson and was initiated into almost all of the secret societies that occult Paris had to offer. Under the name Tau Paul, he was consecrated bishop of Concorezzo in the Église gnostique de France. He wrote widely on traditions of magic, mysticism, and esotericism, publishing over twenty books in French.

“Reading Occult Botany was a deeply enjoyable experience that satisfied many diverse urges for botanical knowledge, from within one compendium.This strange and intriguing miscellany leads one through portals and fields, gardens and celestial realms. The plant entries are helpful for quickly finding zodiac and planetary correspondences; they also include a peppering of rare pieces of occult lore alongside many medicinal applications of old. The footnotes are very helpful and detailed, as are the charts, tables, and appendices within the book. It is a must-have for students and seekers who wish to blend the magical with the medicinal, the earth with the stars.”

– Corinne Boyer, folk herbalist, teacher, and author of Under the Witching Tree

“A refreshing look at the treatises of occult herbalism. A fascinating, in-depth deep dive and understandable approach to the esoteric arts as they pertain to plant, animal, and mineral medicines with an emphasis on occult botany and the Hermetic arts, including lab alchemy. A one-of-a-kind, expansive dictionary of magical plants with special care given to the translation and annotations in the footnotes to further illustrate the understanding of these plants then and now. A must-have for any seeker of esoteric herbalism.”

“Occult Botany gives us a needed look at esoteric herbalism from 1902, when philosophical arts had not yet veered dangerously into the pseudoscience of the new age that we have today. We can see whole philosophies at work within these pages that should help modern readers navigate their way out of the philosophical cul-de-sacs that modern herbalism has been circling for too long.”