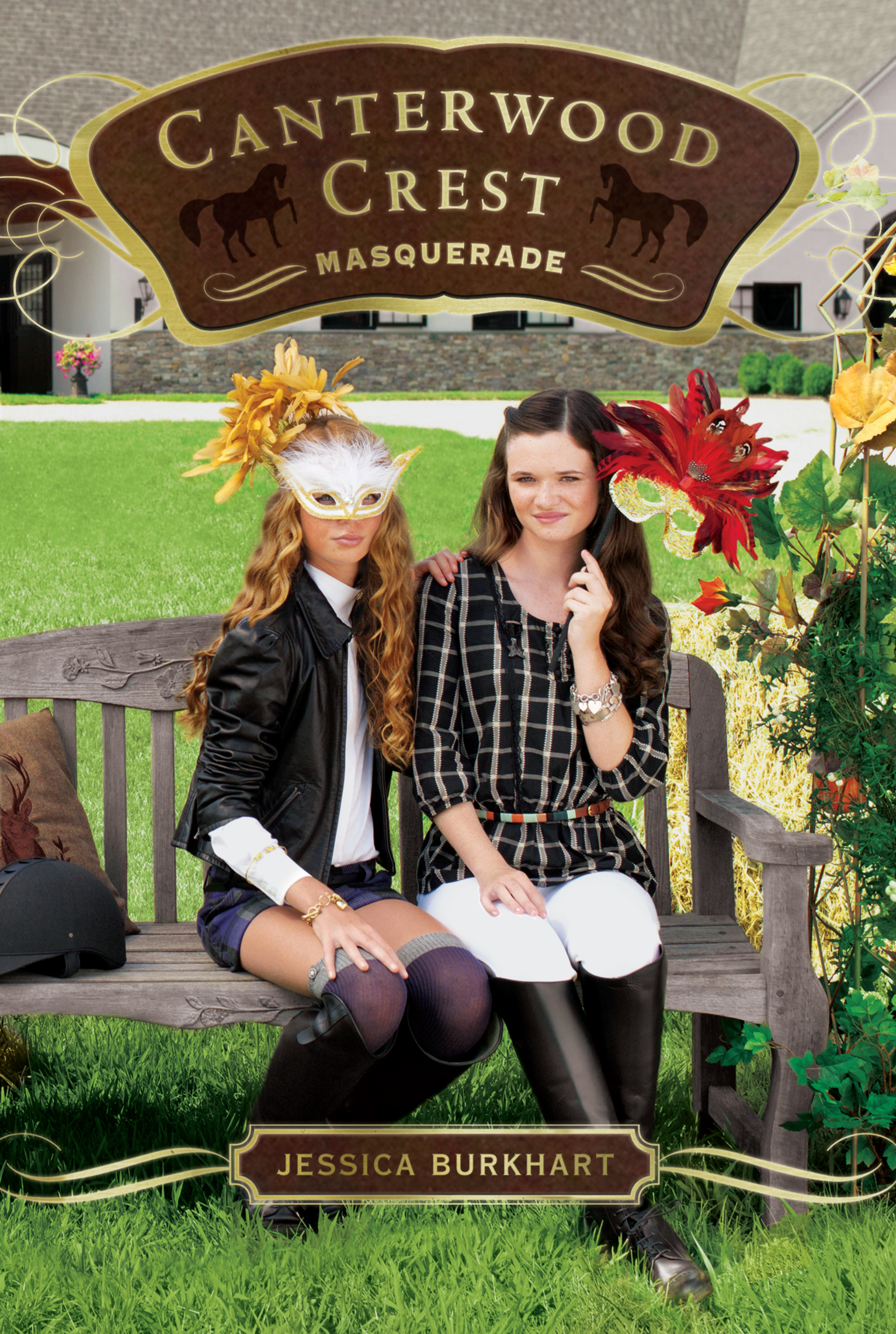 Canterwood is known for its fabulous parties, and Halloween is no exception. Lauren Towers is especially excited for the big day. Not only is it her favorite holiday, it’s also her birthday! And this year, she and her friends will celebrate in style—by attending Canterwood’s first-ever masquerade ball. What Lauren doesn’t know is that there’s a special someone behind a mask, just waiting to be revealed. Will this mysterious guest make this masquerade magnifique, or will her perfect birthday bash become a bummer?

MEET MY NEW BFF—JUDGE NELSON!
A SHINY, SILKY BLUE RIBBON GLEAMED FROM Whisper’s bridle. The judge who’d pinned it there extended her hand to me. I shifted Whisper’s reins to one hand and read the judge’s name badge. MS. NELSON. I leaned down and shook her hand. This did not feel real.

“Congratulations, Miss Towers,” Ms. Nelson said, smiling. The brunette in a navy suit had appeared so intimidating when I’d ridden for her a short while ago. But now, I kind of wanted to crown her as my new BFF! She had given me a blue ribbon, after all.

My head felt as though it was going to float away from my body and into the cloudless sky. I truly hadn’t focused on a ribbon during my first class with Whisper. My goal had been to do our best. Cliché, but true.

That was New Lauren—a competitor who thought of riding well first and placing later. Old Lauren, pre-Canterwood Lauren, would have accepted the ribbon, added it to her collection, and started focusing on the next show. The next chance to win.

My first show since my almost career-ending accident at Red Oak Horse Trials.

My first competition as a Canterwood Crest Academy student.

My first time riding in front of judges on my own horse.

Whisper and I had tried our hardest and had given everything we had in the arena—that had been enough for me to be happy. The win was icing on a très yummy carrot I planned to give Whisper later. A snort from a horse around me pulled me out of my thoughts.

“Blue looks good on you guys,” Lexa Reed said. Next to me, she had a red ribbon on Honor’s bridle. Lexa, a close friend, was also on Canterwood’s intermediate riding team with her strawberry roan mare.

“Thanks, Lex,” I said. “And congrats! We’re so celebrating tonight!”

“Um, yeah.” Lexa smiled, doing a quick dance in the saddle. She glanced around as if looking to see if anyone saw. I tried to hold back a giggle, but it escaped from my lips. Lexa couldn’t stop herself from dancing, and I felt as if I’d had a little too much green tea.

The judges motioned for us to exit the arena. Lexa and I followed a girl on a black gelding who’d come in third. Honor and Whisper had each set a hoof on the grass outside the arena when Lexa and I couldn’t hold it in for another second.

“Number one and two!” Lexa said. “So awesome!” Her smile was bright against her mocha-colored skin. A quick surge of relief pumped through me. My mind had shifted back to Old Lauren’s for a moment, and I’d worried that Lexa would be jealous of my win or mad that I’d beaten her. But that wasn’t Lexa. She was a true friend, and Lex was genuinely happy about our placements.

“We showed everyone how Canterwood riders compete,” I added. “To win!”

“Yeah, we did.” Lexa’s happiness radiated to Honor, and the mare picked up on it. Her neck arched and she half pranced. Whisper, watching Honor, copied her. Her delicate gray head went high into the air as she lifted each hoof a little higher than necessary.

We walked the horses away from the arena and back to a quiet spot under a shady tree. The campus was swarming with riders from four area schools, but Lexa and I had been lucky enough to stake out a place to relax before our next class. Khloe, my other BFF and roomie, had been cheering us on from here, but she was gone.

“Did Khloe have a class?” I asked.

“Don’t think so. She’ll prob be right back. Or maybe she’s off practicing, oh, a mean girl, or a competitive girl, or some other persona she might need in her acting repertoire.”

Giggling, we dismounted and high-fived.

“Having an actor for a BFF keeps things interesting,” I said.

We turned our attention to the horses. I petted Whisper’s neck. “You were the superstar, girl. I want to hug you like crazy, but we have trail class left. I don’t want to mess up your braids or get covered in Whisper hair and lose points for appearance.”

We loosened the horses’ girths and gave them tiny sips of water from a shared yellow bucket. Mike and Doug, two of the stable grooms, were doling out water buckets to the competing horses.

Whisper’s gray coat was dry under her saddle pad, and she didn’t show any signs of nerves from all of the action. She also didn’t exhibit symptoms of fatigue—either from stress or our class.

“I couldn’t love you more,” I told Whisper. “You treated that class like any old lesson. Wait till we’re done for the day.”

Whisper flicked an ear in my direction and lowered her trimmed, velvety muzzle into my hand. I kissed it and scratched under her forelock.

We looked up and a blonde bounced up to us, leading a bay mare.

“Ahhh! Congratulations again!” Khloe said. She ground tied Ever, who reached out her muzzle to say hello to Honor and Whisper. “I’m so glad that I got to watch you both get your ribbons.”

“Awww,” Khloe said, winking at Lexa. “Our LT is in shock. Should we pour cold water on her?”

“Let’s not pour cold water on her,” I said, playing along. “Lauren would have to retaliate in the middle of the night. Something involving glitter and glue, perhaps.”

Lexa took off her helmet, full-out laughing. “I kind of want this to happen so I can see whatever glitter idea you have!” She ran a hand over her curly black hair. It was in a chic low bun—not loose and down like Lex usually wore it. Natural reddish highlights made her dark skin look even prettier, and a single coat of mascara made her deep brown eyes look bigger.

Khloe shot Lex a pretend I’m going to hurt you look. “I’d like to remain glitter and glue free, thank you very much. So I’ll skip the cold water.”

Khloe’s brown eyes had a playful look when they landed on me. She certainly didn’t look like she’d been up since four this morning. Her tan, freckle-free skin was sans makeup except for clear gloss. We’d both woken instantly when the alarms had gone off hours ago. Adrenaline during show day wasn’t something I could sleep through. If only it was that easy to wake up on school mornings!

“Truce?” I asked, tilting my head.

I unsnapped my black velvet-covered helmet and clipped it to Whisper’s saddle.

“Here comes someone for Lauren,” Lexa said in a singsong voice.

I turned. He headed our way. Drew Adams. An insta-smile came to my face. Drew and his blood bay gelding, Polo, hadn’t competed in the intermediate dressage class. When I’d entered the ring, I wished Drew had been able to see my ride. See me in my element. But when my name had been called for a ribbon, I’d spotted Drew cheering for me. He’d been in the stands the whole time.

“Hey,” he said, smiling at all of us before his gaze settled on me.

I felt my fair cheeks start to flush. I tried to think of something—anything else but the cute guy standing in front of me—but my mind blanked.

“Thank you,” I said. “I came out of the arena feeling like we’d done our best, but I had serious competition. Like Lexa.” I tipped my head in my friend’s direction.

“Sorry, Lex,” Drew said. “I saw your ride too. It’s too bad there couldn’t have been a tie. Honor executed those turns beautifully.”

Lexa waved her hand. “Second place is what we deserve. Lauren and Whisper blew us away. I’m so happy for her! Plus, it’s going to make Honor and me raise our game.”

Lexa was such a great friend. Gracious, positive, but still competitive. She was the best kind of teammate I could hope for—someone who was there for her fellow teammates even when it came down to individual ribbons.

“How does it feel?” Drew asked. He stepped closer and patted Whisper’s shoulder. His sea-blue eyes were soft. I could stare into them forever. They stood out against his black hair and looked like gemstones against his pale skin.

He wasn’t asking how it felt to win. “I feel like I can finally close the door on Red Oak,” I said. “I needed this—a show—to be able to move a thousand percent past what happened.”

Drew smiled, and I couldn’t help but do the same. “That’s great. I’m happy for you.”

“How’re you doing?” I asked. “You had cross-country, right?”

Drew shook his head. “Yeah, but we’re talking about you. About your win.”

“Okay, okay!” He laughed, holding up a hand in a conceding gesture. He reached under his helmet, which was hanging on Polo’s saddle. There was a flash of blue, and he produced a winning ribbon.

“Omigod! Congratulations!” I said, shaking my head. “I wish I could have seen your ride. Why didn’t you tell me?”

“I really didn’t want to take away from your moment,” Drew said. “I was going to tell you guys later.”

“You wouldn’t have ‘taken away from’ my moment,” I said.

“She’s Lauren Towers,” Khloe said. She waved her hand at me in a look-at-this-girl gesture. “Canterwood Crest Academy student and winner of her first class of the season.”

Her words took a second to sink in. I glanced around at each of my friends.

Nothing was going to take away my new title. And I wasn’t talking about my win.