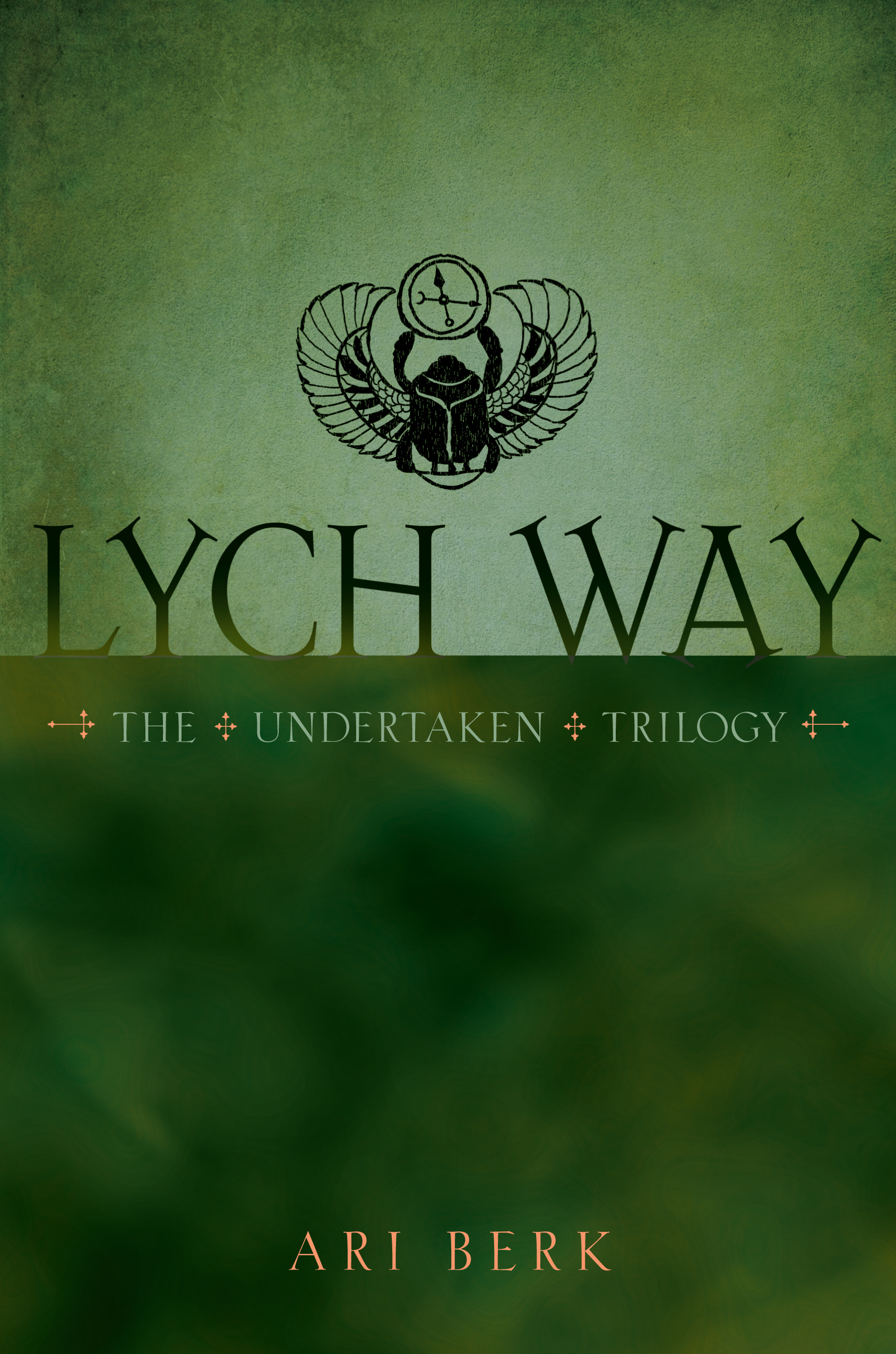 In the conclusion to the Undertaken trilogy that Publishers Weekly called “a thought-provoking gothic fantasy,” Silas must master his powers and confront a past that is anything but dead.

Silas Umber has returned from Arvale, his family’s ancestral home. Frantic to retrieve the shade of his beloved Beatrice, he turns his back on the spectral chaos he has left behind, unaware that the malevolence he unleashed has followed him back to Lichport.

As his family and friends suffer and fall at the hands of the vengeful Huntsman from Arvale’s sunken mansions, Silas must reach deep into his complicated bloodline to summon powers and wisdom beyond those required of a simple Lichport Undertaker. But the dark and painful secrets of his birth threaten to overwhelm him, and if he can’t lay the ghosts of his own past to rest, Silas may lose everything and everyone he has grown to love and worked to protect.

Lych Way
A FALCON TURNED SLOWLY IN the cold air, its arcs becoming wider and higher with each pass it made over the corpse.

It rose above the cobbled lanes and leaning houses and flew north, past the bare trees whose roots cracked the sidewalks on most of Lichport’s crumbling streets. It could see the river in the distance ahead. Then, as though it had changed its mind, the bird banked, and flew back the way it had come. It circled once more far above the body and then stooped, dropping from the sky into a blur until it opened wide its sharp-tipped wings again, briefly holding the air before landing gently on the dead woman’s shoulder. The falcon flapped quickly, finding its balance. Dark and light markings flashed from the underside of its wings as it lifted its yellow legs up and down, careful not to pierce the corpse’s clothing or flesh with its talons.

The peregrine tilted its head to the side and looked at the woman’s dull eye with its bright one, perhaps seeing its own reflection. Leaning closer, the bird moved its smooth beak slowly across the woman’s face as though to wake her. It plucked tentatively at the disheveled tresses of hair lying across her face and shoulders. The bird stood atop the body, crouching, vigilant, jerking its head sharply this way and that, attentive to each sound it heard—branches scraping against one another, distant waves falling to shore, anything that moved or stirred the air.

The falcon waited like that for some time before a movement farther down the street caused it to leap into the sky again. Another corpse, desiccated and elderly, shambled toward the woman’s body and, lifting it from the ground, carried it away. The peregrine followed above them, unseen and silent, in the direction of Temple Street, where the one corpse carried the other up the stairs and onto the veranda of a large house. On the roof of that house, the falcon perched upon one of the spiral brick chimneys and waited. Inside the house—she knew with the instinct of a mother—was Silas Umber, who in life had been her son.
LEDGER
It is now surely beyond any dispute that the first death watch, the original Hadean clock, was built by Daedalus. Hesiod makes no mention of this episode. True. But what cared he for the machinations of mere men? Pausanius, Apollodorus, and Ovid are all cryptic, and generally reliable, but the most detailed account is found in the “lost” portions of Hyginus’s Fabulae. No other versions of this account exist but, in truth, what classical author would have written openly on such a matter, particularly in those long ago times when selfish, vengeful gods walked closer to the sides of men? Who would scribe a story that would have reddened the face of Hades with shame, only to have such records used against them when they later arrived in Tartarus’s dark tribunal halls, where more creative punishments might be meted out over the long eternities? Then as ever: better to say little and live long.

Nevertheless, my own careful studies of the surviving accounts reveal that Daedalus, on the occasion of his son’s death, sought to confound the work of Hades, the Lord of the Dead. Mors was then merely the herald, not yet king, and so it would indeed be Hades that would take offense at such an undertaking. Daedalus’s cleverness was considerable. With his son’s corpse close by, he created a kind of clepsydra, or water clock, and in a small metallic chamber below where the water pooled, he summoned and locked up the ghost of his son, so that the boy would not be lost to him, could not be taken away into the lands of shadow. Nor could his son’s spirit wander—that most terrible of fates. Father and son would remain together. Hades, go hang.

All depictions of the original device are lost, but its workings we know well enough from the writings of the those Undertakers, those inheritors of Daedalus’s invention, who both saw that first Hadean clock, kept it safe, and who later made their own versions, each with the technology that time and their own craft afforded them. I suspect, since Daedalus’s day, the technique has been more or less consistent. The clock merely kept the time, noted the passing of moments and hours, by the flow and collection of water (and later, by mechanism), a simple reminder of man’s fleeting mortality. But, with the spirit entrapped within, when the workings of the clock were halted, when the hole through which the water passed was blocked with wax (or the dial stopped), time halted its course as well, and the dead could be perceived.

How the particular “spiritual” mechanism functions remains a considerable mystery. And surely, long ago, the action must have been performed with some trepidation, for the halting of time would have been an affront to both Hades (who so relies on time’s passage to carry death to mortals) and Cronos himself, the miserable Titan who fathered Hades into the world so that the dead might be herded like cattle into pens and thereby remain peasants, even in the afterlife where we might all one day have continued on as kings in our own manors and blissful estates, had things been otherwise.

Still, we may speculate that when the forward motion of time, or its semblance, was halted, the entrapped soul, sensing the moment or lack thereof, would seek to make a way for itself into that Other World that is the inheritance of every soul. Yet, being bound, and though the gate, or Lych Way, be opened, the ghost could make no egress. But the pale light of those shadowlands, passing into our world through the Lych Way as a mist, or rather, a sort of Plutonian ether, might make transparent mortality’s curtain, revealing, with time suspended, the presence of the dead yet residing within or about our mortal sphere.

It is perhaps best not to dwell too long upon the miserable irony of Daedalus’s creation. For while he sought freedom for Ikarus from that harsh imprisonment Hades would have put upon him below in Tartarus, by setting his son’s ghost in the prison of the clock’s mechanism, Daedalus himself became Ikarus’s unwitting jailor. But in truth, what father does not seek, through love or necessity, or ignorance, to choose for his son that occupation that will keep him gainfully employed and close to home?

—FROM THE HIDDEN HISTORIES OF THE HADEAN CLOCK, ALSO CALLED THE UNDERTAKER’S FRIEND AND BURDEN, BY JONAS UMBER 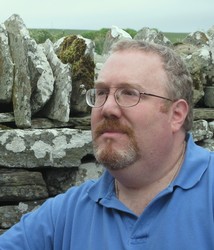 Ari Berk is the author of the Undertaken trilogy and Nightsong, illustrated by Loren Long. He works in a library filled to the ceiling with thousands of arcane books and more than a few wondrous artifacts. When not writing, he moonlights as professor of mythology and folklore at Central Michigan University. He lives in Michigan with his wife and son. Visit him at AriBerk.com.

More books in this series: The Undertaken Trilogy