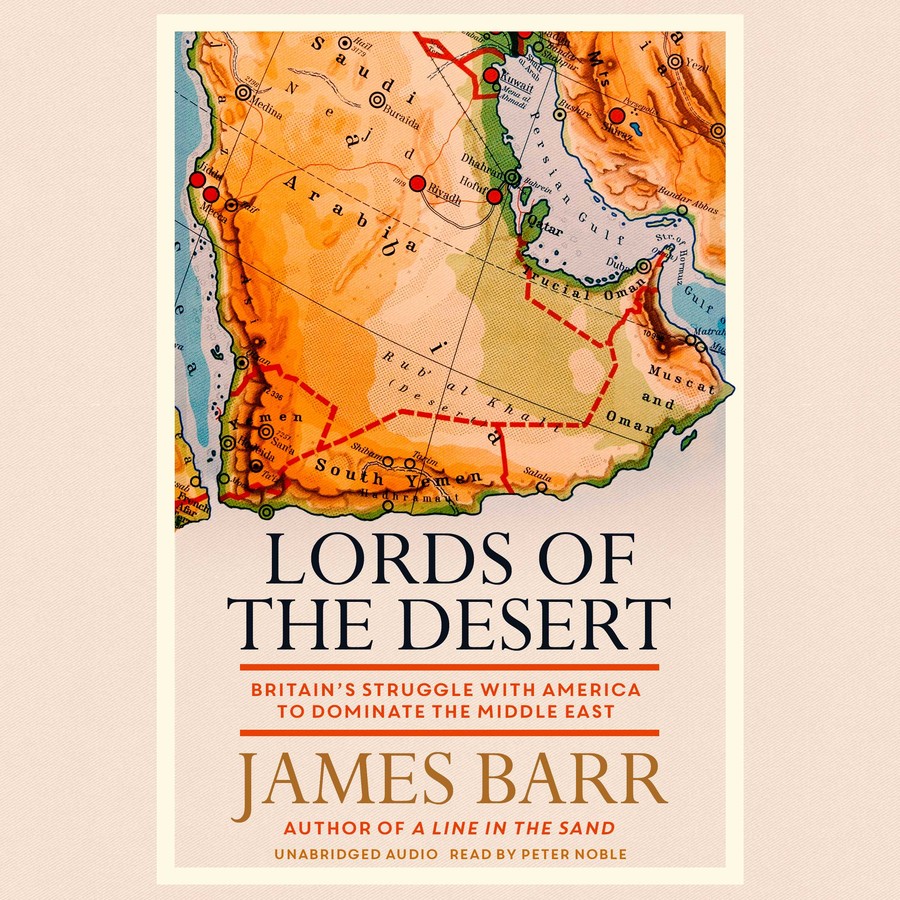 James Barr
James Barr has worked in politics, at the Daily Telegraph, in the City, at the British Embassy in Paris, and is currently a visiting fellow at King's College, London. He read modern history at Oxford has travelled widely in the Middle East. His previous book, A Line in the Sand, is also available from Simon & Schuster. He lives with his wife and two children in south London.
Peter Noble

– The Spectator on A Line in the Sand

'With superb research and telling quotations, Barr has skewered the whole shabby story'

– The Times on A Line In The Sand

'Lively and entertaining. He has scoured the diplomatic archives of the two powers and has come up with a rich haul that brings his narrative to life'

– Financial Times on A Line In The Sand

'A masterful account of Anglo-American rivalries that shaped the modern Middle East after WWII—brilliant storytelling with a rich cast of characters, Lords of the Desert is irresistible reading.'

'With its oil and its waterways, the Middle East was and remains a first step for any rising world power, and also the final trap for empires on the decline. In this lively page-turner, Barr unearths the obscure history of our disastrous engagement with the Middle East today—and of our own imperial decline.'

'Many of the events in this book will be familiar, but instead of presenting them from the more usual perspectives of the Cold war confrontation between the US and Russia, or Imperial withdrawal, James Barr considers them instead from the angle of US-British rivalry. This is refreshing, but it is perhaps also closer to the angle from which many contemporaries would have considered the Suez canal crisis of 1956 or the coup that removed Mohammad Mosaddeq in 1953, for example. This book is therefore not just an excellent, lively account of salient events in this period in the history of the Middle East; it also opens up some new ways to think about them.'

'In this compelling new book, James Barr recalls a now forgotten story of British-American competition for power in the Middle East during and after their victory in the Second World War.  This is essential, gripping history with major relevance for those who wish to understand that tortured region today.'

'High adventure and covert action meet in this account of a momentous power shift that decisively shaped today’s world. Lords of the Desert reshapes our understanding of the modern Middle East—and also helps explain how the United States became a global power.'

– Stephen Kinzer, author of All the Shah’s Men and Overthrow

– Emma Sky, author of The Unraveling

'An essential book for understanding the modern Middle East—and a thrilling read to boot.'

'The middle decades of the twentieth century were ground zero for U.S. involvement in the modern Middle East. In this deeply researched and marvelously readable account, James Barr explains how Americans’ entry into the region was achieved at the expense of the main previous western power there, Great Britain. By illuminating this crucial moment of imperial transition, Barr provides vital background for understanding the turbulent Middle East-U.S. relationship that has evolved since.'

– Hugh Wilford, author of America’s Great Game: The CIA’s Secret Arabists and the Shaping of the Modern Middle East