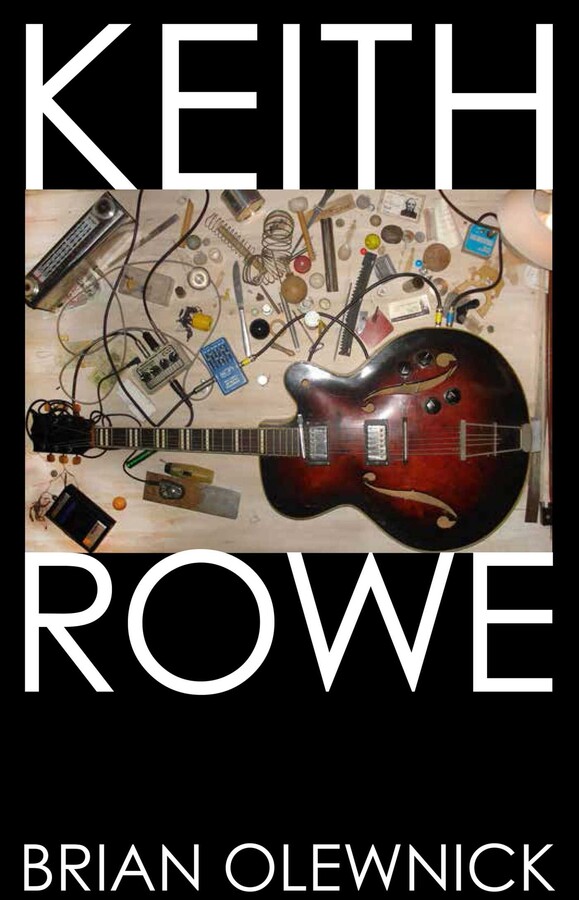 "For someone interested in going 'beyond' with music and with guitar, this essential history will help you set your sights on places no musician has gone." -Henry Kaiser for Guitar Moderne

The first and only authorized biography about Keith Rowe, his solo career, and his influence as the guitarist in the cult British improvised music band AMM, a group who counted Syd Barrett from Pink Floyd, Sonic Youth, and composer Christian Wolff as admirers.

In London, in the fall of 1965, a group of four musicians, dissatisfied with the confines they had encountered in the British jazz scene, came together with a highly thought-out agenda to revolutionize the way music was created:no repertoire, no solos, no regular rhythms, no melodies, no fear of silence, 100% improvised.This rejected rules firmly in place then, as now, among even the most forward-looking of musicians.

Keith Rowe was one of the founding membersof this collective. They called themselves AMM and soon added the composer Cornelius Cardew, an associate of John Cage and Karlheinz Stockhausen, who was seeking to escape what he thought were equivalent strictures in the avant-garde classical world. As a quintet, AMM created music unlike anything else being done at the time and, being immersed in the London scene of the mid-60s in which musical boundaries were amorphous, found themselves on the one hand sharing bills with nascent bands like Pink Floyd, The Who, and Cream while on the other working with and alongside Yoko Ono and Christian Wolff.

Rowe, a guitarist trained as a painter, adapted to his guitar the lessons he'd learned in the visual arts, placing it flat on a table or the ground as Jackson Pollock had done with his canvases, using it as a sound source to be approached with all manner of implements, opening up a vast new territory of exploration, one which would be enormously influential in rock and contemporary classical, as well as the field of free improvisation.

Over 12 years in the making and via exhaustive research and exclusive interviews Brian Olewnick has traced Rowe's life from childhood through the present, with focuses on London's mid-60s experimental music scene, the political unrest of the late 60s, the radical politics of the early 70s, the ongoing saga of AMM through the 90s and the accompanying advance of creative music over that time period, centered around Rowe's participation in those events and his major contributions to the contemporary avant-garde environment. Through the many ups and downs of AMM and beyond, Rowe has become an eminence grise to generations of musicians and is still today continuing to push the boundaries of what is possible in the world of sound.

Brian Olewnick is a new-music writer and visual artist. He helped run the avant-garde jazz loft Environ from 1976-1980 and was eventually seduced into writing about contemporary music in various forms from jazz to modern classical, free-improvisation, and beyond. He has written for All Music Guide, The Wire, Time-Out New York, and other publications in addition to his blog, Just Outside, one of the principal sites for analysis of new music, where he has published over 2,000 reviews since 2006. He has given talks on the craft of writing about contemporary music in Philadelphia, Västerås, Sweden, and Sokołowska, Poland. He lives with his wife, Betsy, in Kinderhook, New York. Keith Rowe (b. 1940, Plymouth, England) is an improvising guitarist and electronicist. He is a founding member of the ensemble AMM (1965), a group combining aspects of avant-garde jazz and post-Cageian contemporary music and one of the most influential and revolutionary musical ensembles of the past 50 years. AMM drastically revised what was possible in music and stripped much baggage from the existing form, doing away with stars, solos, and even the necessity to play anything at all!Their influence has been felt from rock (early Pink Floyd and Yoko Ono, to Sonic Youth, David Sylvian, and beyond) to "classical" (Christian Wolff and Merce Cunningham through the Wandelweiser school). His conceptual and technical advances have been adopted by scores of musicians through the years while he continues to move on into uncharted territory in recorded works, interactions with videographers and dancers, graphic art, and more. He has appeared on over 200 recordings and has been the subject of several exhibitions documenting both his sound and visual artwork. He lives with his wife, Stephanie, in Clisson, France.

"A very readable and well-researched account, with lots of great anecdotes."

Whether you've attended to Keith Rowe's music for mere minutes or for decades, Brian Olewnick's terrific biography brings home the fact that much of what you know about this crucial artist likely contains significant gaps. No longer. This marvelously researched life in its similarly fine telling-not to mention the bringing-together of a tremendous collection of written materials on Rowe and AMM-occupies a much-needed place in the literature on improvised and experimental music from the 1960s forward, and its nexus in Rowe of performance, politics, and visual art.

Whether you've attended to Keith Rowe's music for mere minutes or for decades, Brian Olewnick's terrific biography brings home the fact that much of what you know about this crucial artist likely contains significant gaps. No longer. This marvelously researched life in its similarly fine telling-not to mention the bringing-together of a tremendous collection of written materials on Rowe and AMM-occupies a much-needed place in the literature on improvised and experimental music from the 1960s forward, and its nexus in Rowe of performance, politics, and visual art.

Despite having extreme music as his subject, along with even more extreme politics, bitter feuds and the convoluted history of AMM and free improvisation, Brian Olewnick brings clarity, even-handed compassion, wry humour and insight to one of the great stories of post-war avant-garde music.

– David Toop, author ofOcean of Sound and Into the Maelstrom

"For someone interested in going 'beyond' with music and with guitar, this essential history will help you set your sights on places no musician has gone."

"Keith Rowe, it seems, was always an original.But even avowed admirers of his work will glean from Brian Olewnick's weighty and exhaustively researched biography a new understanding of just how original the now-seventy-eight-year-old performer was and still remains. The book provides an invaluable explanation of how Rowe developed his entirely unprecedented approach to the guitar-and why his influence primarily has been felt second hand, through the more widely publicized efforts of acolytes such as the psychedelic-rock innovator Syd Barrett and the indefatigable improviser Fred Frith."

"One can not underestimate the importance and innovation of the work undertaken by Brian Olewnick."

"If you have even a passing interest in AMM, Rowe, or the artist's path, this book is essential."

As seen in: Jazz Word, 15 Questions