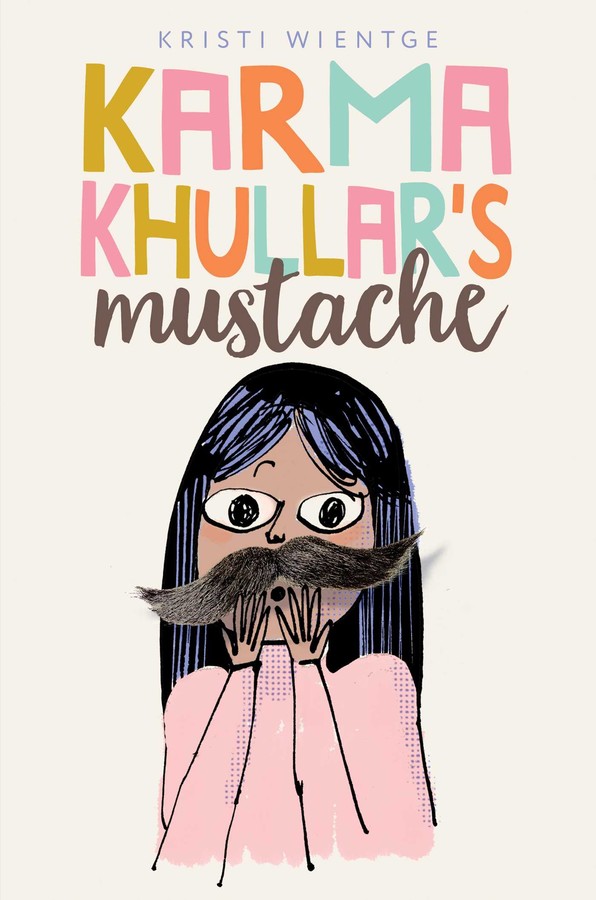 In the tradition of Judy Blume, debut author Kristi Wientge tackles the uncomfortable—but all too relatable—subject of female body hair and self-esteem with this “sparkling and triumphant tale of a middle school misfit” (Heather Vogel Frederick).

Karma Khullar is about to start middle school, and she is super nervous. Not just because it seems like her best friend has found a newer, blonder best friend. Or the fact that her home life is shaken up by the death of her dadima. Or even that her dad is the new stay-at-home parent, leading her mother to spend most of her time at work. But because she’s realized that she has seventeen hairs that have formed a mustache on her upper lip.

With everyone around her focused on other things, Karma is left to figure out what to make of her terrifyingly hairy surprise all on her own.

As if starting middle school isn’t scary enough on its own, Karma Khullar has to deal with a lot of other life changes at the same time. Her dadima has recently passed away, her father has become a stay-at-home dad, her mother has a new time-consuming job, and her best friend Sara wants to spend all her time with Lacy, her popular new neighbor. On top of all that, Karma has recently grown a mustache—seventeen black hairs, to be exact! She’s nervous and self-conscious and isn’t sure how she’ll navigate her new life without her usual support network. Once school starts, it’s up to Karma to figure out how to live up to her name and attract the good karma that she needs to survive sixth grade.

1. Why do you think Karma is so fixated on the emergence of her new mustache? Describe and discuss some of Karma’s emotions associated with the mustache. Is she overreacting? How would you react if you were her?

2. Karma’s dad recently lost his job and has taken on a new role as a stay-at-home parent. Why do you think this is a hard adjustment for Karma? How do you think her dad feels about this new situation? How does his new role affect their relationship?

4. When Karma feels that Sara doesn’t care enough about her mustache she says, “a best friend should think my big deals were her big deals.” What does Karma mean? Do you agree with her? Do you think that’s an important part of a friendship?

5. Discuss Karma’s relationship with Dadima. What were some of the important lessons that Dadima taught Karma and how did Karma apply those lessons to her life?

6. Karma’s brother, Kiran, loves music, and their mother encourages his exploration of the arts. However, Karma’s dad would prefer that he focus on the sciences. How do the arts differ from the sciences? Why do you think Karma’s parents have different opinions on what’s important? Do you think one is more important than the other?

7. Every day Karma brings her tiffin filled with Indian food to school. It’s a source of both comfort and embarrassment for her. Discuss why it makes her feel these two very different emotions. Why do you think she chooses to continue bringing her tiffin to school at the end of the story?

9. As Karma begins to keep track of her karma points, she has a list of vices to avoid, including anger, pride, greed, and attachment to things of this world. Consider a time when you exhibited one of these vices. What happened? Is there anything you could have done differently to improve the situation and how you felt?

10. There are several instances in the book when Karma wishes Sara would stick up for her but Sara stays silent and ignores the situation. Karma says “until Sara had sat quietly around this past week, I never really got it that sometimes the silence hurts worse than the teasing.” What does Karma mean by this? Do you agree or disagree?

11. When Karma goes to Lacy’s house to tutor her, she discovers that Lacy and her mother are having a hard time adjusting to their new town. She also learns that Lacy was held back a year in school. How do you think Lacy’s home life and being held back affect her behavior toward others?

12. Go back to chapter 24 and reread the story that Dadima told Karma about the potter and his lump of clay. Discuss the significance of this story and why it has suddenly become very meaningful to Karma.

13. When Karma’s mom discovers her shaving in the bathroom, she admits to Karma that she’s been preoccupied and regrets that Karma hadn’t wanted to discuss her mustache with her. How does this represent a turning point in their relationship? What changes between them after their conversation?

14. At the end of the novel Karma says, “Things weren’t exactly the same as the old way, but I was learning to be comfortable in the newness.” What does she mean by this? Describe a time when you had to adjust to a new situation. Were you able to find comfort in the newness?

15. When Ginny gives Karma a bumper sticker with her name on it, Karma can’t wait to go home and hang it next to the one from Sara. Why is this significant? How have Karma’s thoughts on friendship shifted throughout the book?

16. How have the characters changed at the end of the novel? Who changed the most? What events do you think contributed to that character’s progression?

18. Discuss an instance of peer pressure in the novel. Have you ever felt peer pressure to do something you didn’t want to do? How did you react?

19. Throughout the novel, Karma is referred to as “Stache” and “Stache attack.” Discuss some reasons why name-calling is very hurtful. Why do you think that some people resort to these hurtful tactics?

1. In the novel, Karma decides to keep track of her “karma points.” She would give herself points for not getting angry, prideful, greedy, or showing attachment to the things of this world. If she caught herself having any of these vices, she’d lose points. Try keeping track of your own karma points for one morning. How many points did you end up with? Is it difficult to avoid certain vices? Did you discover anything about yourself in this process?

2. When Karma goes to tutor Lacy for the first time, we read about the experience from Karma’s point of view. Rewrite this scene from Lacy’s point of view. Consider what Lacy would say about her mother’s behavior and admission that Lacy was held back, how she would feel about having Karma over to her house, and how she would feel about needing a tutor.

3. Mrs. Clark suggests that each student come up with a big idea to put in the suggestion box. Come up with your own big idea for your class. Explain why your idea would be successful. Just like in the novel, your idea should be about making learning engaging beyond the classroom.

4. The food that Karma brings in her tiffin to school is unfamiliar to her classmates but it’s very normal for Karma because it’s part of her family’s culture. Think of a food that represents your family’s culture. Write about a memory you have that involves eating this food.

5. There are many instances of bullying throughout the novel. Brainstorm ways that you can help prevent bullying in your school. Write a letter to your teacher presenting your ideas and explaining why bullying prevention is so important.

This guide has been provided by Simon & Schuster for classroom, library, and reading group use. It may be reproduced in its entirety or excerpted for these purposes.
Kristi Wientge

Kristi Wientge is originally from Ohio where she grew up writing stories about animals and, her favorite, a jet-setting mouse. After studying to become a teacher for children with special needs, she spent several years exploring the world from China to England, teaching her students everything from English to how to flip their eyelids inside out. She’s spent twelve years raising her family in her husband’s home country of Singapore, where she spends her days ferrying her four kids to school and taking Punjabi and music lessons. With the help of her mother-in-law, she can now make a mean curry and a super-speedy saag. She is the author of Karma Khullar’s Mustache and Honeybees and Frenemies. Visit her online at KristiWientge.com.

"I was immediately captivated. Growing up in a Punjabi household and having facial hair at the same age as Karma, her story and hardships sounded very similar to mine...I will most definitely be sharing this book, story and the lessons inside it to my younger siblings and future children."

"Debut author Wientge has sensitive, anxious Karma confronting the universal preteen problems of self-esteem, bullying, and changing friendships, with everyday details of her interracial family's Sikh faith and culture seamlessly woven in . . . Readers will enjoy seeing how Karma navigates the complexities of adolescence, middle school, and the 17 hairs on her upper lip in this realistic and humorous story of new friendships and family support."

“You have a new BFF in Karma Khullar. Half Sikh, half Methodist, and 100% hilarious, Karma is a delight – and so is this sparkling and triumphant tale of a middle school misfit.”

"In Karma Khullar's Mustache, Wientge's creates a poignant, complex, and humorous world for the strong, but sensitive Karma. A beautiful, streamlined read for anyone struggling with common middle school issues like friendship, identity, family problems, and body image."

– Veera Hiranandani, author of The Whole Story of Half a Girl

"Debut author Wientge has sensitive, anxious Karma confronting the universal preteen problems of self-esteem, bullying, and changing friendships, with everyday details of her interracial family's Sikh faith and culture seamlessly woven in . . . Readers will enjoy seeing how Karma navigates the complexities of adolescence, middle school, and the 17 hairs on her upper lip in this realistic and humorous story of new friendships and family support."

"Debut author Wientge neatly captures how it feels to be different, especially as an adolescent . . . The novel’s ending—hopeful but not completely happily-ever-after—sends a strong message of self-acceptance and resilience."

"Funny and relatable, this is a solid pick for those transitioning to middle school."

"This is a smoothly realistic and heartfelt exploration of an ordinary middle-schooler with problems aplenty and just enough courage to solve them."