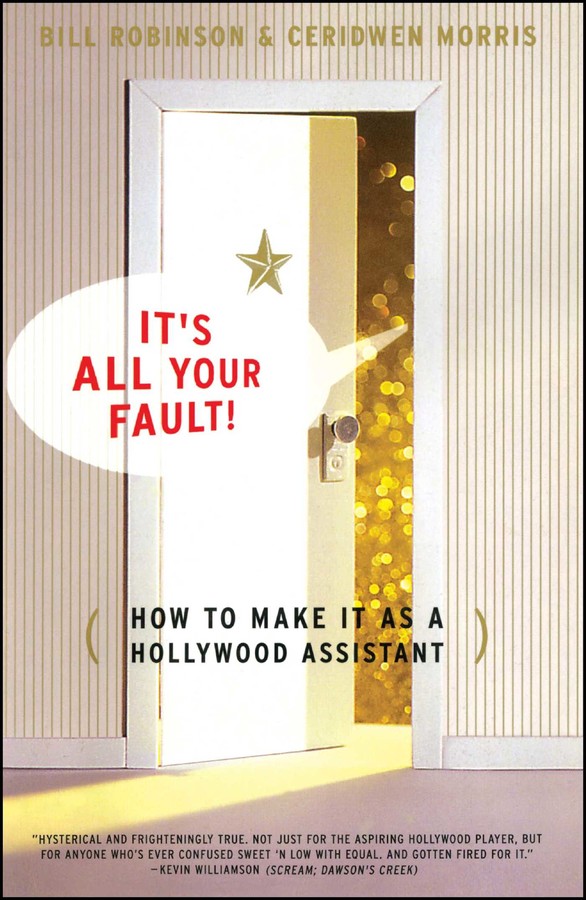 It's All Your Fault

How To Make It as a Hollywood Assistant

An Essential Guide to Landing -- and Keeping -- Your first Hollywood Job
A position as an assistant to a producer, agent, director, studio executive, or star can be the path to a fabulous career -- or a one-way ticket to hell. How can the aspiring Hollywood assistant quickly learn the inside track to success while avoiding the land mines? It's All Your Fault is the answer. Written by two former Hollywood assistants who've been there and done that, It's All Your Fault is bursting with hard-earned advice, from figuring out who's who and who isn't to sex, drugs, and other work-related issues. Filled with outrageous anecdotes and countless celebrity stories, It's All Your Fault proves an indispensable addition to the nightstand of every wannabe Hollywood mover and shaker.

Kevin Williamson Scream; Dawson's Creek Hysterical and frighteningly true. Not just for the aspiring Hollywood player, but for anyone who's ever confused Sweet 'N Low with Equal. And gotten fired for it.

Darren Star Executive producer of Sex and the City This is the book I wish I had read before coming to Hollywood. A terrifying piece of nonfiction.

Jack Valenti President of the Motion Picture Association of America This is what it's like swimming in the piranha-infested waters of Hollywood and surviving. What a joy to read a book crackling with wit and effortless humor, which is in short supply even in the dazzling movie world.

Diane Keaton Because Bill Robinson was my assistant for two miserable years, you might think I would be enraged to find myself obliquely referred to all over this amazing book. Quite the contrary, I was literally bowled over by the amount of inside knowledge, detailed research, and hilarious anecdotes Ceridwen and Bill offer anyone even remotely interested in a show business career. I laughed, I cried, but mainly I found It's All Your Fault a globally terrifying look into the psychology of moviemaking.

Kristen Johnson 3rd Rock from the Sun This is the definitive book on the madness of Hollywood. Chock full of brilliant writing, hilarious anecdotes, and above all, juicy gossip. You will laugh so hard you'll embarrass yourself.

Courtenay Valenti Senior VP, Theatrical Productions, Warner Bros. A truly funny, insightful guide about how to succeed in Hollywood. This book is vital for anyone who wants to glean never-before-told insider tips. I only wish I had read this entertaining, smart book when I was starting out -- it would have made my early career years so much easier.

John Burnham Executive Vice President and Cohead of Worldwide Motion Pictures, William Morris Agency From a man who's seen it all, from top to bottom: no better advice can be given by greater experts.

It's All Your Fault

How To Make It as a Hollywood Assistant