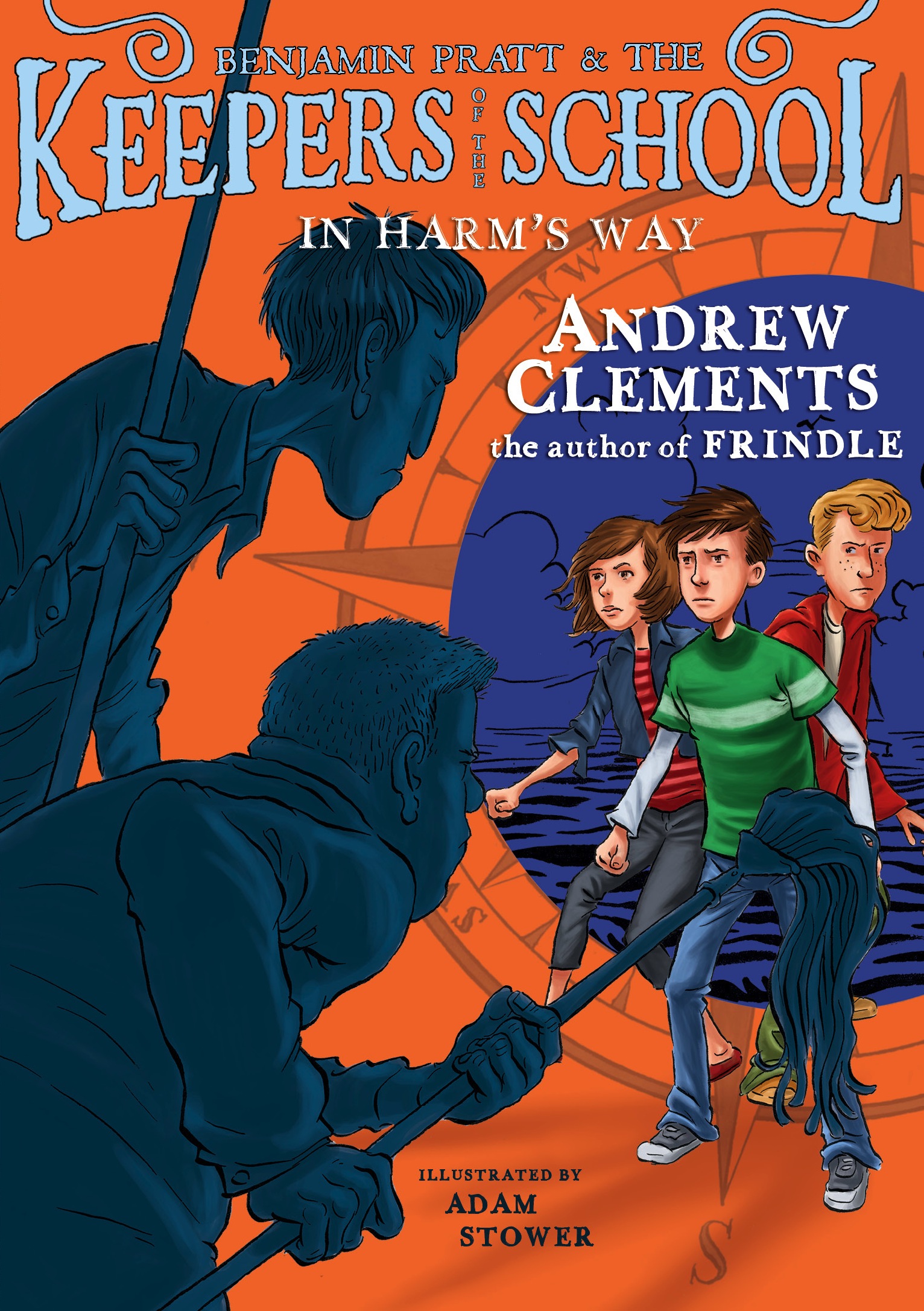 The threat to the Keepers doubles in the fourth Keepers of the School adventure from Andrew Clements, the master of the school story.

Benjamin Pratt and his friends Jill and Robert are determined to save their school from destruction. But just when it seems they’ve finally gotten the upper hand over that awful Janitor Lyman, they’re caught completely off guard by his next move: Lyman has called in reinforcements, and suddenly Benjamin, Jill, and Robert find themselves dodging not one evil janitor, but two. That’s right: Lyman’s got himself a partner. And it quickly becomes clear that Wally, the new guy, is even more corrupt and menacing than Lyman.

Luckily, Ben’s team has been growing too. Plus, thank to the latest safeguard, they also have a secret fund of millions of dollars. But all the money in Massachusetts isn’t enough to stop Lyman and Wally, not when they’ve come this far, and not when they are about to put the most harmful part of their plan into play. Could the next safeguard give the Keepers what they need—or has their battle to save the school already been sunk?

Benjamin Pratt stood in front of the principal’s desk with Jill Acton and Robert Gerritt. Mr. Telmer had spotted them talking together in the hall before homeroom, and ordered them into his office.

And now they stared at the computer screen he had turned their way.

Mr. Telmer clicked the mouse, and they watched the video again: Three kids hurried along a dark hallway, their faces fuzzy in the red glow of an exit sign. The kids in the video looked a lot like them.

The principal had gotten an anonymous e-mail—a YouTube link to ten seconds of video with a dangerous title: “Pratt, Acton, and Gerritt Crash the School.” The location was unmistakable: the first floor hallway near the office of the Captain Duncan Oakes School. And the time stamp on the video? May 30, 3:17 a.m., which was last Friday night—actually Saturday morning.

Ben forced his eyes to stay on the screen, afraid he would suddenly look up at the principal and shout, Okay, we’re guilty! Call the police! Bring the handcuffs!

One thought looped through his mind.

From deep inside his private tunnel of fear, Ben thought he heard laughter.

He wasn’t. Robert Gerritt was laughing.

“Because this looks like a huge prank, sir. Somebody used a phone camera to shoot three kids in the empty hallway . . . and changed the exposure so it would look like the middle of the night, and then added a fake time stamp, slapped our names on it, uploaded it to YouTube, and sent the link to your e-mail—which is right there on the school’s website. That’s what it looks like.”

Mr. Telmer started to speak, but Robert didn’t let him.

As Ben watched with a mixture of horror and awe, Robert sobbed, buried his face in his hands, and looked like he was having a mental breakdown right there in front of the principal’s desk, moaning and gurgling as he slumped backward onto a wooden chair.

Ben and Jill just stared, and Mr. Telmer didn’t know what to do.

But he was the principal, so he had to do something. He hurried around the end of his desk and awkwardly patted Robert’s shoulder.

As Robert got his sobbing under control, the principal helped him to his feet and handed him a couple of tissues from the box on his desk. Robert blew his nose while Mr. Telmer steered him out his door, through the main office, and into the hallway. Ben and Jill were close behind.

And with that, the principal hurried back into his office and shut the door.

Before they had walked ten feet, Robert had made a full recovery.

“Glad that’s over,” he muttered, then gave his nose one more blast.

Ben was still in shock. Because, what Robert had said about his mom and dad? That was true. They had died in a car crash when he was in kindergarten. But the way he had just used that terrible fact?

Jill was too shaken to be gushy. “Yeah, nice going, but that was a very close call!”

It was Monday morning. The front hallway was crowded with kids, but Ben felt like the three of them were the only ones there. And for sure, they were the only kids who knew that a war was raging inside this old building.

He scowled as they walked toward the south stairwell. It had been a bad weekend for the Keepers of the School. The kids on the YouTube video? That actually was Jill and Robert and him—inside the school at three thirty on Saturday morning. Illegally. They had just confirmed an important discovery under the stairs in the northwest corner—a secret Underground Railroad station, a discovery that should have permanently preserved the whole school and totally ended the Glennley Group’s plans to build their new amusement park. But that creep Lyman had surprised them again, this time with a low-tech security device—a snarling Rottweiler named Moose. They had panicked, and they forgot to lock the secret door to the compartment, which is why the dog had been able to scratch his way in. So Lyman had found the hideout, realized what it was, and then his bosses at Glennley headquarters took over. In a huge rush, they had contacted all sorts of heritage and preservation groups. And late Saturday afternoon, the Glennley Group had issued a press release. They announced the discovery as if it were theirs, and made a promise to the world: They were going to keep this newly found Underground Railroad station just as it was, safe in its own small corner of the original school. But most of the old building was still going to be demolished to make room for their newest cheesy theme park, Tall Ships Ahoy!

On Sunday evening the school superintendent had held a press conference on the front steps of the Oakes School, and all the TV news stations from Boston had been there. Dr. Gill had smiled and smiled, talking into a cluster of microphones.

“I know I speak for the whole town of Edgeport when I say we are thrilled about this exciting discovery! The legacy of the Captain Duncan Oakes School will live on here forever, even though most of the building behind me will be gone.”

When a reporter asked who had actually found the runaway slave hideout, the superintendent smiled again. “That person has chosen to remain anonymous so that the discovery itself can remain the center of attention.”

So, thanks to Lyman and his dog, the big amusement park plans were still on track. In less than two weeks, the old school and the town of Edgeport and its quiet harbor would be changed forever.

“That is not happening!”

The three of them stopped near the doors to the south stairwell.

Ben talked through clenched teeth. “I said, Lyman and his sneaky lawyers and his nasty dog are not going to win!”

Robert grinned. “Of course not, Pratt. Relax! Look, I’ve gotta go check on something in the library before homeroom, but don’t worry. I’ve got some ideas about the next safeguard, and how we are gonna spend some serious cash! Later.” Gerritt took off toward the library.

Jill looked at Ben. “So, how did Lyman get that video of us?”

He shrugged. “Probably a motion-activated camera. But sending it to the principal? That’s new. He wants to get us kicked out of school—or sent to jail. And his first shot was almost a direct hit.”

Jill said, “Let’s talk before math, okay? But don’t take this stuff personally, Benjamin. That’s partly why Lyman’s so good—he’s just doing his job. We can learn from him.”

“We have to,” Jill said. “That’s all—we have to.” She gave him a half smile, then hit the stairs.

Ben walked toward the art room, which meant he had to go right past the door to the janitor’s workshop. He was dreading an encounter with Lyman. The guy had stolen that whole Underground Railroad thing—a major victory. And now this new video attack, using the principal as a weapon? That was nasty . . . truly vicious. Like his Rottweiler.

Ben tapped his tongue against the back of his front teeth, a nervous habit. He really wanted to avoid Lyman. The guy was sure to give him one of those oily, sneering smiles.

The workroom was open, and just before he got there, Ben saw the end of the janitor’s long trash cart come nosing out the doorway. He wanted to duck and slip past, but he couldn’t help glancing left, straight into Lyman’s face. And when he did that, he had to stop.

Ben stood there directly in front of the trash cart, heart pounding, almost in a trance.

The man shot him a dark, angry look.

Ben jumped aside, but he kept staring at the janitor.