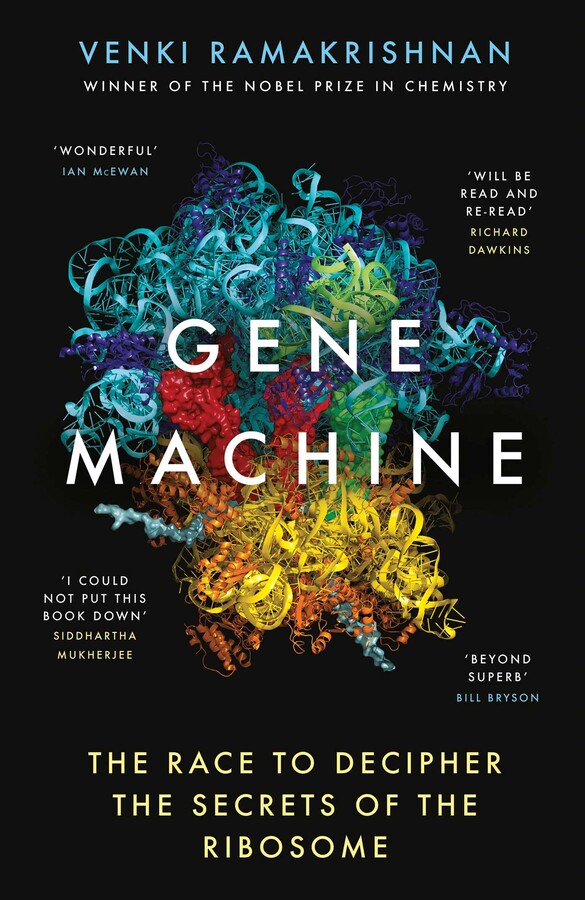 The Race to Decipher the Secrets of the Ribosome

Everyone knows about DNA, the essence of our being, the molecule where our genes reside. But DNA by itself is useless without a machine to decode the genetic information it contains. The ribosome is that machine. Venki Ramakrishnan tells the story of the race to uncover its enormously complex structure, a fundamental breakthrough that resolves an ancient mystery of life itself.

‘A must-read for anyone interested in a glimpse of the messy business – rivalries, failed experiments, the frustration of mistakes – of how science happens.’

‘If someone had told me that one of the most witty and enthralling books I’d read this year would be on the quest to understand ribosomes, I believe I would have laughed in his face, but I would have been quite wrong. Gene Machine is beyond superb.’

– Bill Bryson, author of A Short History of Nearly Everything

‘An engaging and witty memoir…that highlights how science actually works… This profoundly human story is written with honesty and humility… Anyone who is captivated by an absorbing story well told will find much to appreciate in this fascinating book.’

‘This is not an objective history of the field, but a highly personal account. As such, anyone who wants to know how modern science really works should read it. It’s all here: the ambition, jealousy and factionalism — as well as the heroic late nights, crippling anxiety and disastrous mistakes — that underlie the apparently serene and objective surface represented by the published record.’

‘Discovering the structure of the ribosome was a truly incredible moment in the history of humankind… For students of how science actually happens, this is a book to be treasured and pored over.’

‘It is [Ramakrishnan’s] full embrace of the role of the antihero that makes Gene Machine so much fun to read and also serves as a reminder to us all of the beating human heart that lies at the center of every advance in science.’

‘The ribosome, a structure of astonishing complexity, “lies at the crossroads of life” and Venki Ramakrishnan played a key role in revealing its biological mysteries. His superb account lays out the science with great lucidity, but he also grants us the human face of science – the hard work and brilliant insights, of course, but also the role of luck, of personalities, jealousy, money, the roulette of major awards, and the further rewards heaped upon the fortunate. Science, in his glorious telling, becomes “a play, with good and bad characters”. Competition and collaboration can appear inseparable, crucial figures get overlooked. It’s a wonderful book and a great corrective to the notion of science as dispassionate, untainted objectivity.’

‘[Ramakrishnan's] meticulously detailed and generous memoir has the same disarming frankness as The Double Helix. His personal honesty about the competitive ambition that drove him is tempered by his deeply thoughtful reflections on the potentially corrupting effect of big prizes. Gene Machine will be read and re-read as an important document in the history of science.’

‘An enchanting and invigorating work, Gene Machine casts a many-angled light on the world of science, the nature of discovery, and on one of the deepest mysteries of twentieth-century biology. Ramakrishnan, one of the key players in deciphering the molecular basis of protein translation, gives us both a rollicking scientific story and a profoundly human tale. In the tradition of The Double Helix, Gene Machine does not hesitate to highlight the process by which science advances: moving through fits and starts, often underscored by deep rivalries and contests, occasionally pitching towards error and misconception, but ultimately advancing towards profound and powerful truths. An outsider to the world of ribosome biology – an Indian immigrant, a physicist by training – Ramakrishnan retains his “outsider’s” vision throughout the text, reminding us about the corrosive nature of scientific prizes, and the intensity of competition that drives researchers (both ideas, I suspect, will have a munificent effect on our current scientific culture). Ramakrishnan’s writing is so honest, lucid and engaging that I could not put this book down until I had read to the very end.’

– Siddhartha Mukherjee, author of The Emperor of All Maladies and The Gene

‘Quite a ride. This is a riveting personal account of the race to decipher the structure of the ribosome, one of the most complex and fundamental machines in the cell… Ramakrishnan’s telling is laced with wisdom spun from a remarkable life story and the sharp lab anecdotes that are the lifeblood of everyday science.’

‘This book is dynamite. Like no science book ever before, this is an honest, frank and simply jaw-dropping account of how a relative outsider ended up winning a Nobel Prize.’

‘This exhilarating account of the race to understand the molecular machine that turns genes into flesh and blood is remarkable for its candid insights into the way science is really done, by human beings with all their talents and foibles. Venki Ramakrishnan, an outsider in the race, gives an insider’s view of the decades-long quest to map the million atoms in the machine to fathom the fundamentals of life, pave the way for new antibiotics, and share the glory of the Nobel Prize.’

‘In Gene Machine one of the world’s leading scientists reveals the reality of scientific discovery and the rivalry, collaboration and thrills that are involved. The result is a brilliant under-the-hood account of what it takes to win the Nobel Prize. Exciting and brutally honest, Venki’s book explains the dramatic turns in the race to describe the structure of the ribosome – an essential component of every cell that has ever lived. I laughed out loud, I shouted in disbelief, and I learned so much from reading this book.’

The Race to Decipher the Secrets of the Ribosome