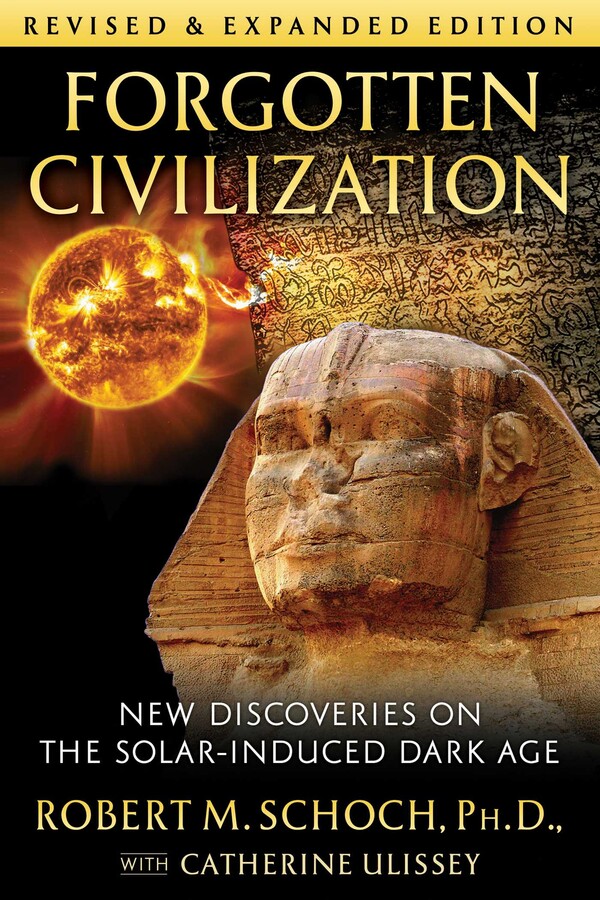 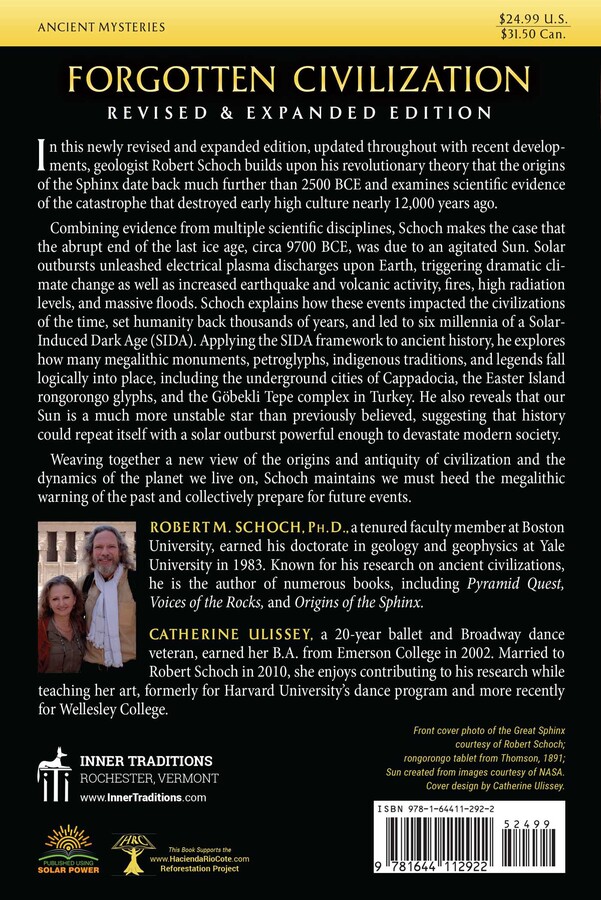 • Updated throughout with recent developments and additional illustrations

• Reveals how solar outbursts caused the end of the last ice age, unleashed catastrophe upon ancient advanced civilizations, and led to six millennia of a Solar-Induced Dark Age

In this newly revised and expanded edition, updated throughout with recent developments, geologist Robert Schoch builds upon his revolutionary theory that the origins of the Sphinx date back much further than 2500 BCE and examines scientific evidence of the catastrophe that destroyed early high culture nearly 12,000 years ago.

Combining evidence from multiple scientific disciplines, Schoch makes the case that the abrupt end of the last ice age, circa 9700 BCE, was due to an agitated Sun. Solar outbursts unleashed electrical/plasma discharges upon Earth, triggering dramatic climate change as well as increased earthquake and volcanic activity, fires, high radiation levels, and massive floods. Schoch explains how these events impacted the civilizations of the time, set humanity back thousands of years, and led to six millennia of a Solar-Induced Dark Age (SIDA). Applying the SIDA framework to ancient history, he explores how many megalithic monuments, petroglyphs, indigenous traditions, and legends fall logically into place, including the underground cities of Cappadocia, the Easter Island rongorongo glyphs, and the Göbekli Tepe complex in Turkey. He also reveals that our Sun is a much more unstable star than previously believed, suggesting that history could repeat itself with a solar outburst powerful enough to devastate modern society.

Weaving together a new view of the origins and antiquity of civilization and the dynamics of the planet we live on, Schoch maintains we must heed the megalithic warning of the past and collectively prepare for future events.

From Chapter 1: A Whirlwind Trip

One evening, my mind still racing from all I had seen on Easter Island--and perplexed at the genuine enigmas and disgusted by the conventional explanations (or should I say nonexplanations)--Katie suggested that we rewatch a video titled Symbols of an Alien Sky (Talbott 2009; see also Talbott and Thornhill 2005). One portion of the video discusses the work of Anthony L. Peratt, a plasma physicist associated with Los Alamos National Laboratory in New Mexico, who became interested in ancient petroglyphs (Peratt 2003). I already knew of Peratt’s work and indeed had met him at a conference many years earlier. In a nutshell (we will review his work in more detail later in this book), Peratt noticed that many petroglyphs found around the world appear to record the shapes that would have been seen in the sky if there had been a major solar outburst--a plasma discharge (ionized particles and associated electrical and magnetic phenomena)--in ancient times. If our Sun discharged a huge ball of plasma toward us, it would have dire consequences for Earth, including life and humanity, as the surface of the planet would be literally fried by the incoming electrical currents. Nothing like this has been seen in modern times, although small plasma discharges, known as coronal mass ejections (CMEs), are a regular feature of the modern Sun. However, as a geologist, I was aware that going back in time, the Sun has had periods of much higher activity, including at the end of the last ice age (circa 9700 BCE). Peratt and his colleagues postulated a major solar outburst in ancient times, but they did not specify a precise date or dates. They had also not considered one other very important thing.

Katie’s simple but profound observation, while we watched the documentary, was that the rongorongo glyphs look remarkably similar to the petroglyphs that Peratt believes record plasma discharges and configurations, due to a major solar outburst, seen in the ancient skies. Could the rongorongo be a text, a scientific text if you will, that records in meticulous detail what was happening in the skies of long ago? Were the Easter Islanders in fact the keepers of an ancient, long forgotten, knowledge?

I was struck, as if by plasma itself. Many isolated threads, topics I had pursued for years and decades, suddenly began to fall into place. My work on redating the Great Sphinx of Egypt (discussed in chapter 2) indicates that civilization and sophisticated culture date back thousands of years earlier than mainstream archaeologists have generally accepted. The same story seems to hold true for the oldest Easter Island moai, which may be thousands of years older than conventionally believed. And within months of visiting Easter Island, Katie and I found ­ourselves in Turkey inspecting the incredibly sophisticated and also incredibly ancient--dating back twelve thousand years--site of Göbekli Tepe, confirming and reinforcing my work on the remote antiquity of early civilization. But the issue has always been, What could have happened to such an ancient, forgotten civilization? Why is there such a paucity of evidence for it?

Within weeks of our return, spurred by Katie’s discovery, all that I had studied for so long came into sharp focus as the pieces began to fall into place, and a new story of a very ancient and long-forgotten civilization emerged. This is not another tale of lost continents and technologically advanced science-fiction-like beings loosely based on the overinterpretation of a few myths and legends. This is a story that combines the evidence of modern geology, geophysics, climatology, astrophysics, archaeology, comparative mythology, and many other disciplines. As we shall see, the catastrophes that occurred nearly twelve thousand years ago, eradicating this early, forgotten civilization, appear to be on the verge of occurring once again. Furthermore, those very ancient peoples may have known something about the world and the cosmos that has since been lost. But if we can break free from the shackles and blinders of conventional status quo paradigms and worldviews, we may be able to regain this essential knowledge.

In this book, we will explore these and related topics. Our story reaches back into the remote past and continues into the future. We need to understand multiple lines of evidence that together weave a new view of the origins of civilization, ancient history, our future, and the dynamics of the planet we live on. This is truly a grand puzzle with many parts. We will begin with a key piece, the Great Sphinx.

UPDATE: Katie’s discovery that the rongorongo glyphs are very similar to the petroglyphs that Peratt and his group had been studying for years, and that both are ultimately representations of plasma discharges and configurations as would be seen in the sky during a major solar outburst, was confirmed by a member of Peratt’s team in an email sent to us. It turns out that they had independently made this discovery some years earlier but had purposefully not published it.
Robert M. Schoch

Robert M. Schoch, Ph.D., a tenured faculty member at Boston University, earned his doctorate in geology and geophysics at Yale University in 1983. His books include Pyramid Quest, Voyages of the Pyramid Builders, Voices of the Rocks, Stratigraphy, Environmental Science, and The Parapsychology Revolution.

“Schoch is a true scientist, following the data wherever it leads, heedless of political pressures or worn-out paradigms. His redating of the Sphinx in 1991 launched the New Archaeology. Forgotten Civilization distills all that has happened since into a simple conclusion: that solar activity ended the last cycle of high culture and may destroy ours in turn. Schoch is no scaremonger, no hawker of a pet theory. What we do with this knowledge is up to us, but once digested, it changes everything.”

– Joscelyn Godwin, author of Atlantis and the Cycles of Time

"The new edition of Forgotten Civilization also acts as a platform for Schoch to launch a broadside against his critics in the establishment, whose denizens so often blinker themselves in the interests of self-preservation—and who can blame him? Schoch is to be admired for sticking to his guns, and for his academic resilience over decades. My belief is that it will turn out that he has been, and is, on the right side of history, alternative or otherwise."

"Schoch proposes, based on findings from several different scientific fields, that back around 9700 BCE what he described as an agitated Sun brought the last ice age to a sudden end. He believes that solar outbursts brought about powerful electrical/plasma discharges upon our planet, resulting in severe climate change that involved increased earthquakes, volcanic activity, massive floods, and high radiation levels.Schoch writes how this brought about a Solar-Induced Dark Age (SIDA) that set humanity back thousands of years, and he warns that such a solar outburst could happen again and could have a devastating impact upon our modern civilization. He reveals evidence that our sun is far more unstable than we previously realized."