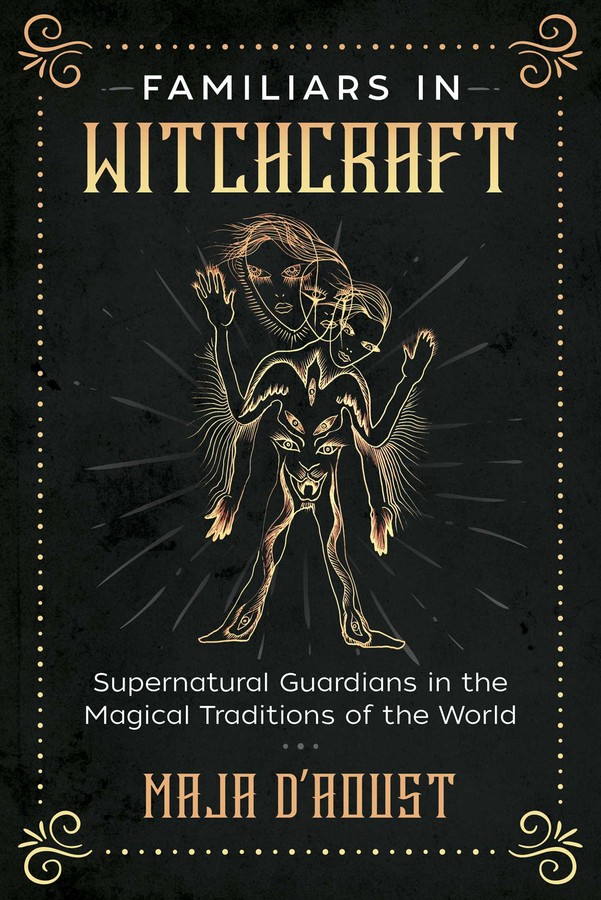 Supernatural Guardians in the Magical Traditions of the World

A comprehensive exploration of familiars and their many forms and powers

• Explores witch’s familiars in folklore, shamanic, and magical traditions around the world, including Africa, India, Scandinavia, ancient Greece, and China

• Examines the familiar in alchemical, Hermetic, and Egyptian magical literature, including instructions for procuring a supernatural assistant

Exploring the history and creation of a “witch’s familiar,” also known as a spirit double or guardian spirit, Maja D’Aoust shows how there is much more to these supernatural servant spirits and guardians than meets the eye. She reveals how witches are not the only ones to lay claim to this magician’s “assistant” and examines how the many forms of witch’s familiars are well known in folklore throughout Europe and America as well as in shamanic and magical traditions around the world, including Africa, India, and China.

The author explains how familiars are connected with shapeshifting and how the classic familiars of medieval witchcraft tradition are related to the power animals and allies of shamanic practices worldwide, including animal guardian spirits of Native American traditions and the daimons of the ancient Greeks and Romans. She examines the fetch spirit, also known as the fylgia in Scandinavian tradition, and how the witch or sorcerer draws on their personal sexual energy to give this creature its power to magnetize and attract what it was sent to retrieve. She looks at incubus, succubus, doubles, doppelgangers, and soul mates, showing how familiars can also adopt human forms and sometimes form romantic or erotic attachments with the witch or shaman.

Reviewing alchemical, Hermetic, and Egyptian magical literature, including the nearly forgotten alchemical works of Anna Kingsford, D’Aoust explores their instructions for procuring the attention of a supernatural assistant as well as an extensive description of the alchemical wedding and how this ritual joins the magician and familiar spirit into a single unified consciousness. Exploring fairy familiars, she reveals how a practitioner can establish a “marriage” with a totemic plant or tree spirit, who, in return, would offer teachings about its medicinal and visionary powers.

Delving deeply into the intimate relations of humanity with the spirit world, D’Aoust shows how forming connections with living forces other than human enables us to move beyond the ego, expand our magical abilities, as well as evolve our conscious awareness.

The Soul Mate has captured the imagination of countless individuals who pine and long for a relationship of this deep nature sometime during their life. The soul mate is generally thought to be something deeply connected to you through some magical fated string of providence in the woven blanket of time and space. When most people think of a soul mate, they think of a person, and more specifically a lover or Romantic partner. But what many people feel uncomfortable recognizing is that almost every primitive culture has stories of animal and plant soul mates, or non-human spiritual soul mates and counterparts as well as soul mates who are spirits of the dead. These are most widely known as a “familiar” spirits. The soul mate has taken a multitude of forms in ancient versions of this entity and wasn’t nearly as restrictive as our modern conceptions. Many tales of the Saints address their forming a special soul mate relationship with a mountain, tree, or even a flower. Some Buddhist scholars have put forth that Siddhartha Buddha formed a spiritual link with theBodhi tree he sat under to claim his enlightenment. Some researchers feel it was the tree that instructed him on how to attain his Buddhahood, like a kind of assistant or mentor. The ancient Religion of the Celtic Druids held similar beliefs, that Trees could educate, inspire and Love humans and many Native American tribes claim trees in their ancestors and direct family lineages.

The concept of a special bond with an animal or natural thing symbolizes a bond with the natural world, and the outside universe aside from humanity. Cities and even parts of land or rivers are said to have Familiar spirits to them as well as stars and phenomenon in outer space. Many ancient cultures taught that through the unification of consciousness with animals or other living things in nature, humans enable their consciousness to unite with a larger living force, that of nature itself. When our consciousness unites with this force and we begin to identify with things other than human, our concept of what we are can powerfullygrow out of our ego limitations. This same idea can be applied to the Spirit familiar as well, that by relating to and identifying with a supernatural being, we thus widen our horizon of what our limitations are. A type of a relationship between human beings and either animal, nature or supernatural spirits are mentioned at some point in all ancient cultures, and are not particular to witches. The captivating concept of the soul mate, or a higher spirit level of relating is one that extends so deeply into humanity it would appear to either be a real phenomenon (due to the girth of its extension) or simply an inherent need within us seeking expression.

What exactly is a familiar spirit and why is it called familiar?

It is helpful to examine the word familiar itself and look into the etymology. We find that this word comes from famulus, which is also where we get the word “family”. The word famulus, actually means “servant”, or more specifically a female servant who leads a household through her indentured devotion. This definition of family takes on new meaning when we look at the traditional role of the female housewife as bound to her duty.

The familiar then is a kind of servant to the person with whom it is connected. It is hard not to recognize the hierarchical dominating implications of this idea. The familiar seems more like Dobby the house elf from Harry Potter under this meaning. We can certainly see the same idea of humans “ruling” over nature in the Judeo-Christian bible. In the creation story, Adam earns the privilege of naming all the things on earth, and through his ability to name them he gains dominion over them. This same idea is discussed at length in early Egyptian literature and the origins of animal husbandry and how it was the early people came to domesticate and live together with wild animals in harmonious existence. The domestication of Cattle in order for humans to rule them even had Gods who represented this ability, Hathor for example, the Golden cow goddess who enabled man-kind to calm and castrate the wild bull in order that they might use its strength to plow their fields. Even the word “Domestic” relates back to the concept of Family and home, and the ability to domesticate an animal is really to make them one of us and allow themto enter into our home, our domicile. This is also where we get the word Dominate, an important consideration since if one were to domesticate an animal, you would have to use a strategy in order to ensure it would not attack you. This would be in keepingwith the concept of the familiar as an animal servant, much like Adam wrangled and domesticated the animals by calling them by their name, the witch gains the servitude of the familiar through a special type of taming bond.

This bond that is formed through the domesticated spirit and that of the witch is a bond of trust. It is a relationship between two things based on an understanding and an exchange of services. Familiar spirits can also be literally “Family” spirits, as they can take the form of dead relatives. Ancestors play a huge role in the identity of many Familiar spirits around the globe, and the worship of the dead while keeping relations in them is a highly practiced form of divination. Some of the religious institutions such as Taoism and Hinduism advocate feats of self-domination in order to attract the more powerful Familiars, such as fasting and abstinence. For when we become rulers and dominators of ourselves, we attract those willing to serve and follow us.

Maja D’Aoust, known as the Witch of the Dawn, is a practicing Witch and scholar of alchemy and occult lore. After completing her bachelor’s degree in biochemistry, she studied Oriental medicine and acupuncture and later earned her master’s degree in transformational psychology with a focus on shamanism, the I Ching, and ancestors. She is the author of A Witch’s Bestiary: Visions of Supernatural Creatures, co-author of The Secret Source, and creator of a Tarot deck, The White Witch Tarot. She lives in Los Angeles.

“Guiding us gently through the realms of black cats and demon lovers, sibyls and oracles, earth angels and falling stars, Maja D’Aoust consistently returns to history and etymology as she reveals how familiar spirits, in their various shapes and forms, have always lived among us.”

– Mikita Brottman, author of Phantoms of the Clinic and An Unexplained Death

“In Familiars in Witchcraft, Maja D’Aoust brings together a vast wealth of lore, history, and incredibly useful insights with such readability and grace. In a subject cloaked in mystery, the author reveals her life experience and devoted education in what should be considered essential reading for the serious occultist and seeker alike.”

– Gabriel Dean Roberts, author of The Quest for Gnosis

“Maja D’Aoust has a unique talent for taking esoteric subjects and presenting them in a way that is lucid and insightful to the contemporary mind. Familiars in Witchcraft is useful to both scholars of the occult and the un-familiar.”

“Maja D’Aoust writes from the depth of her personal experience and never offers simple opinions or conjecture on her subject matter. Instead, what she gives us is background and evidence. Maja is not only a visionary practitioner but also a scholar with an oracle’s ability to draw out what’s important. The magic of Familiars in Witchcraft, and all of Maja’s writing, is the way she pulls knowledge from the vast well of history and presents it to us in a clear, modern, conversational tone. After years of public lecturing, Maja is able to present ideas that can often seem arcane or impenetrable in a way that seems almost effortless. Her work serves as a bridge for lost or ancient wisdom, making it useful and accessible for the reader today.”

"Impressively informative, expertly written, organized and presented, Familiars in Witchcraft: Supernatural Guardians in the Magical Traditions of the World is an extraordinary and unreservedly recommended addition to community and academic library Metaphysical Studies collections in general, and Witchcraft supplemental studies reading lists in particular. It should be noted for students, academia, and non-specialist general readers with an interest in the subject that "Familiars in Witchcraft" is also available in a digital book format (Kindle, $11.99)."

"There’s so much more in the world to be considered a “familiar” than your typical black cat. D’Aoust takes a truly global approach to the conversation. Familiars in Witchcraft is wonderful, global look at what defines a familiar and how that title is mutable depending on culture. A worthwhile read for all those interested in spirit."

Supernatural Guardians in the Magical Traditions of the World