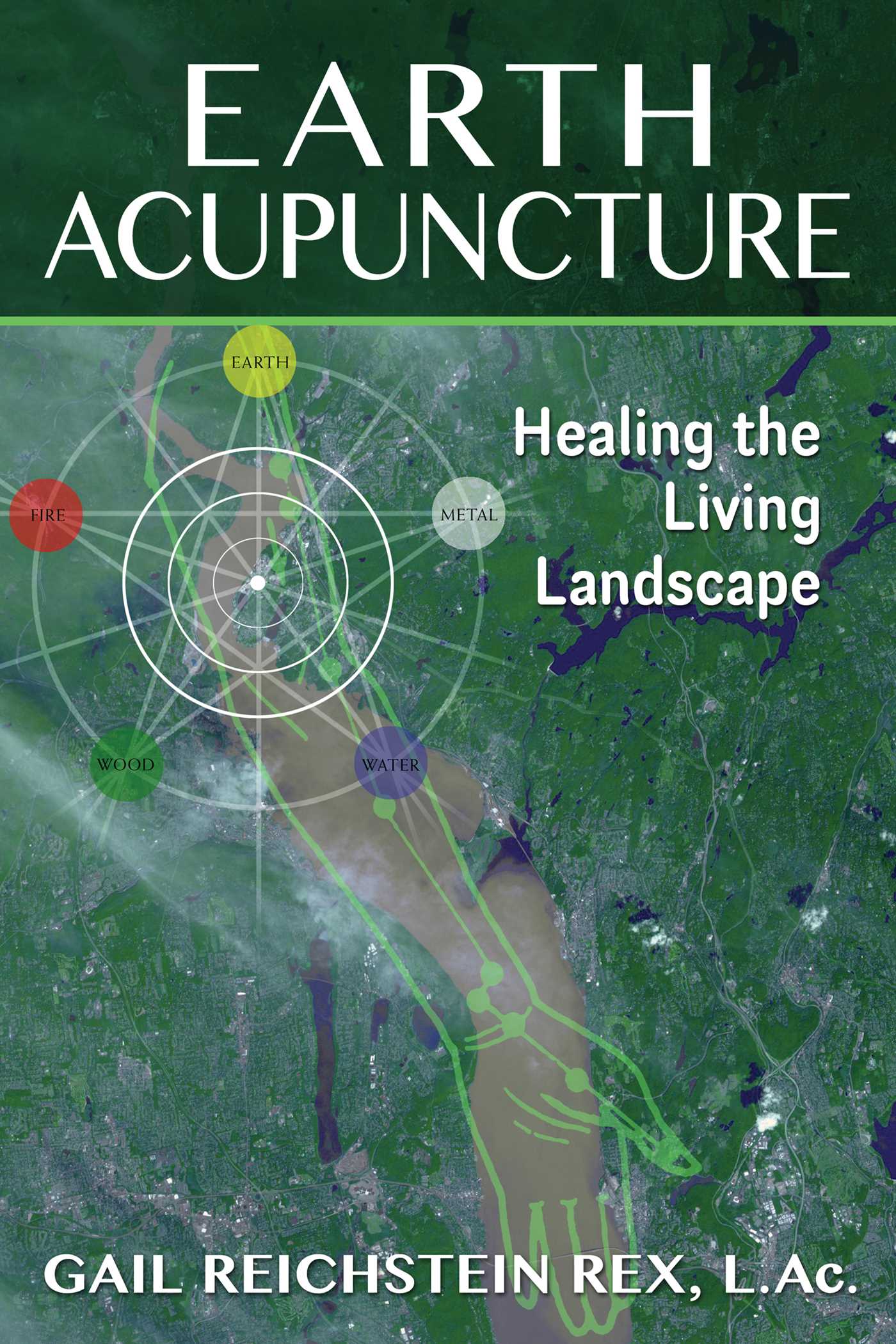 After experiencing a powerful vision of the nuclear power plant near her home and its toxic effects on the Hudson River, acupuncturist Gail Rex was inspired to help heal the river and surrounding lands but was unsure how to begin. Soon after, at a workshop with Cherokee-wisdom teacher Venerable Dhyani Ywahoo, she discovered the answer: she could treat the landscape just as she treated her patients--by taking its pulses and treating the points of stagnant energy and pollution with acupuncture.

Tracing her journey from initial vision and pulse taking to building a stone circle to open a major energy meridian of the Hudson, the author reveals how our rivers, valleys, and forests are capable of illness and healing just like a living being. She explains simple practices for attuning with the living landscape and responding appropriately to the messages and images received from the Earth’s intelligence. By making offerings of thanks and asking the land’s permission before every interaction, Gail Rex demonstrates the power of right relationship in action.

Drawing upon the principles of Chinese medicine and her work with Native American shamanic traditions, Rex shows how the landscape itself reveals both its imbalances and the opportunities for treatment. Using a broad range of diagnostic tools--including direct observation, principles of feng shui, listening to pulses, and working with maps--she demonstrates ways of identifying the master points of the surrounding landscape. She then explores different methods of Earth acupuncture treatment, including building stone circles, planting crystals, and working with wooden and copper-rod needles to treat these specific points and restore energy balance.

Offering not only a proactive method for healing the environment, Rex also reveals how to communicate with the rivers, mountains, trees, and rocks that surround us, allowing each of us to develop an authentic spiritual relationship with the living body of the Earth.

The Pulse of the Land

I woke up thinking about the pulses of the earth; it was a strange concept. In my acupuncture practice, I place three of my fingers on a person’s wrist to take his pulse. Each finger feels something different, and the separate pulses combine together to form a picture that leads to diagnosis. I wouldn’t have imagined that this small gesture could be transposed to something as big as the Hudson river, yet Venerable Dhyani had suggested that I listen to pulses three, six, and nine miles away from the power plant. Could these mileage landmarks somehow be analogous to the pulse locations under my three fingers? If that were the case, I would feel different pulse qualities at each mileage point on both banks of the river--as though they were a client’s two wrists--and these qualities would reflect the health of the area.

But then I began to wonder what I was doing: if I wanted to build a stone circle, why didn’t I just go build one? Pulse-taking might just be a distraction. As soon as I had formulated the thought, however, I understood the reason: pulse-taking is the diagnosis, stone circle is the treatment. Though I had intuitively understood from the start that a stone circle would be healing for the river, I hadn’t really recognized that I would be performing a treatment. But now it was obvious: the stone circle project was medicine. More specifically, it was acupuncture. Acupuncture for the earth. And I was to be the acupuncturist.

Chinese medicine has a whole vocabulary for describing the qualities of pulses--words like thready, wiry, bounding, weak, and deep. You listen until you can match a particular pulse to a quality you understand. In my treatment room, I listen with such intense focus that everything around me seems to disappear. Even the sense of “me” disappears as I become one with the pulse. In that still minute, all boundaries dissolve. Everything shifts. . . . In those interstices of time the rules are different: anything can happen; healing happens.

But I couldn’t quite imagine how the silent, sessile land might generate a pulse--or a story for that matter. How was I going to learn what the landscape needed? I had no idea, but I nevertheless set out the next weekend to give it a try. . . .

Poring over the map, my eyes lit upon the tangle of brooks and ponds that feed the Hudson. They reminded me of a network of blood vessels. Perhaps these “vessels” could be my pulse-points, analogous to the radial artery that I palpate when I take a client’s pulse!

I followed one water system as it wound through subdivisions and parks. Coming abruptly into a clearing, I found myself looking down on an inlet beside the river. “Oscawanna Isl.,” said the map, though it looked more like a pool or a bay connected to the river by a single narrow channel. . . .

I made an effort to synchronize myself with the mood and pace of this place, as I do with my acupuncture clients. I took long breaths, and slowly calmed my thoughts and movements. I hoped to become a part of the scene around me: serene and subdued. After a while I closed my eyes . . . and an image came to my mind of an old brown-skinned woman, rocking in a chair.

I tried to push the image away, so I could listen to the pulse of the place. But I wasn’t feeling or hearing anything like the regular drumbeat of a pulse. . . .Then it occurred to me that perhaps this mental picture was the pulse. And my body felt the way it does when I am listening to a person’s pulse--still and fully focused, like a radio accurately tuned to a particular signal.

I tuned back in, and the image returned easily, the gentle rocking of the old woman’s chair like water lapping at the beach. She seemed frail and barely present; lost in reverie but somehow content. I kept watching. In a whisper-quiet voice, this old woman began to speak, telling stories of her childhood. I saw her as a young girl running and slamming doors and laughing in the sunshine. I saw her with her mother, and her mother’s mother, and a long line of mothers going backward through time. Then I was looking at the old woman again--rocking, remembering--and her image faded from my mind. . . .

If that old woman was a pulse, she was certainly a weak one. I ran through the various pulse patterns in my mind--intermittent, thin, feeble. But her memories: they were a part of her too, and they were not feeble. They were deep, and they were quiet, but they represented a genuine source of strength. I settled on deep, weak, and thready. This place had inner strength somewhere, but it was not currently accessible.

Chinese medicine actually recognizes twelve different pulses, which are considered to be direct reflections of twelve different organ systems in the body. To me, Oscawanna Island seemed analogous to the Kidney yin pulse. Kidney yin expresses a fundamental quality known as Essence; it nourishes, moistens, and seeds the organs with an understanding of inner strength and sense of purpose. . . . In people, Kidney yin becomes depleted from overwork, insufficient rest, and chronic stress: was it possible that the Hudson was weak from overwork, and unable to supply itself with a sense of purpose?

Strengthening weak kidney energy is a long process in Chinese medicine, but not an impossible one. I couldn’t imagine how to effect such changes for the river: in what sense would a stone circle change this fundamental equation? I had no idea, but I was interested enough, now, in the diagnostic part of the project that I wanted to keep going. I would worry about the treatment later.
Gail Reichstein Rex

Gail Reichstein Rex, L.Ac. (1965-2016), was an acupuncturist, author, and editor. A graduate of the University of Pennsylvania and the Tri-State College of Acupuncture, she had practiced Chinese medicine since 1995, first in New York and then in Vermont. She is also the author of Wood Becomes Water: Chinese Medicine in Everyday Life.

“Gifted storyteller Gail Rex follows the wisdom threads of her own deep longing into the heart of nature’s mystery--making it clear that we and the Earth are one. The nature within and around you will come alive as you follow her steps to restore sacred relationship, healing yourself as you bring harmony to the Earth.”

– Llyn Roberts, award-winning author of Shapeshifting into Higher Consciousness and coauthor of Speaki

“An eminently readable compilation of both Eastern and Western geomantic techniques . . . Earth Acupuncture is an excellent book . . .”