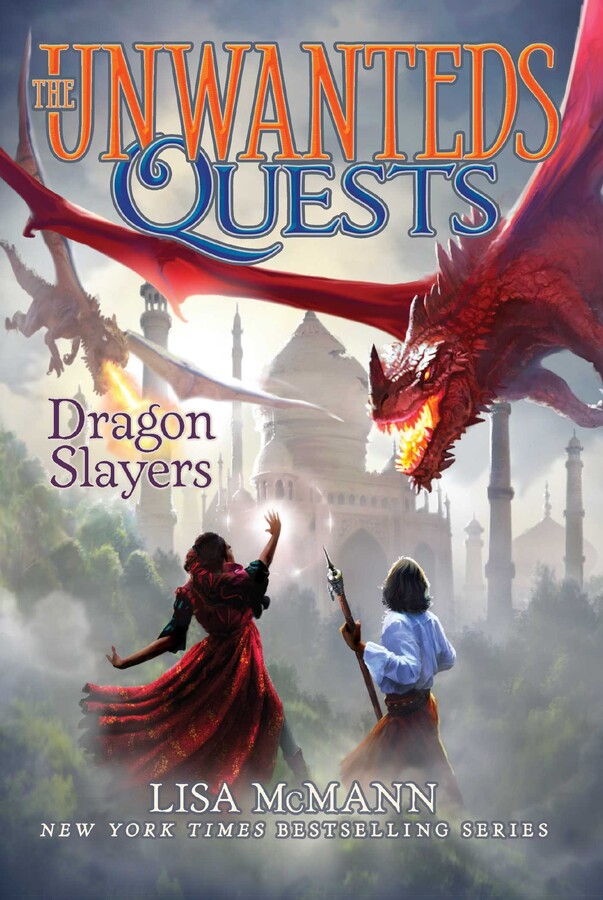 The Revinir is getting desperate.

Following her dramatic abduction of Fifer and Thisbe, the dragon woman traps the twins in an isolated, crumbling palace and surrounds them with four killer dragons in an attempt to coerce them to join her side. Hope finally arrives when Dev sneaks into the castle and the threesome reunites, hatching a plan against the Revinir so devious, so horrifying, that it just might work. But when it comes time to act, Thisbe struggles to confront her deepest fears about her inner levels of good and evil and, to her own dismay, questions if she’s really been on the right side all along.

In Artimé, Rohan and Queen Maiven join forces with Aaron, Florence, and the others to discover the truth of what happened to the twins. But when Fifer sends a devastating message that challenges everything they believe in, Rohan attempts to handle the situation on his own...with disastrous results.

Total Confusion
Thisbe and Fifer had been abducted by the Revinir, and Rohan was beginning to panic. Nobody in Artimé seemed to be doing anything about it. He descended the stairs of the mansion to implore the one in charge. “Florence, please help me understand what’s happening,” he said, stopping in front of her in the entryway. The Magical Warrior trainer and Simber, the winged-cheetah statue, exchanged a concerned glance as the young man began pacing, struggling to stay calm. Rohan finally found his words and turned to face them. “Look. It has been days. Why aren’t we going after Thisbe and Fifer? Are we seriously planning to sit here and wait for Fifer to contact us? What if they’re dead?”

“I’ve told you before,” Florence said firmly. “I understand your concern, and I feel it too. Perhaps even more strongly than you. But we’re going to wait.”

Rohan stopped pacing. “Right.” He thought hard for a moment. “So the Revinir believes she needs a black-eyed human to join forces with her, and because Thisbe is more evil than good, she thinks Thisbe is her ticket,” he said, like it finally made sense to him. “And even though we know the truth—that the dragons have to actually choose their leader, and the Revinir can’t choose herself to be the lead dragon—she doesn’t actually know that. So…” He paused, putting it all together. “She thinks she can convince Thisbe to team up with her—that Thisbe will be tempted enough by the leadership position to go for it.” He shook his head. “Even though that won’t work either, because the black-eyed people need to choose their leader too. And besides, Thisbe would never, ever do something like that.”

“She’d better not,” Florence muttered. “I trained that girl right. If she does something—”

“She won’t,” Simber interrupted impatiently. “She’s smarrrt and loyal. Therrre’s no way she’d do that to us.”

“But what about Fifer?” said Rohan. “She’s way more good than evil. Won’t the Revinir want to do away with her to stop her from influencing Thisbe?”

“I’ve thought about that, too,” said Simber. “And I think she knows that if she does something to hurrrt Thisbe’s twin, Thisbe will neverrr join herrr side.”

“It’s all I can think rrright now to get thrrrough this,” said Simber, and finally the worry lines on his face broke through. He hated being away from his head mage, especially days away. He’d promised once that he’d never let this happen again, yet here they were. Shortly after Thisbe had sent a message calling for help, Fifer, Artimé’s new leader, had sent one telling them all to retreat and wait for further instructions. And he trusted her… almost fully. He cringed. He had no choice but to put his support behind Fifer. She was the head mage—a good one too, unlike Frieda Stubbs—and she’d given an order. Hopefully, they’d know more soon. But if not, this might just drive them all to the brink of madness. It was hard enough to run things in Artimé these days after the civil war. But to do it without the head mage was even harder.

“The best thing we can do,” said Florence, “is to be stronger than we’ve ever been, and to be in a position to help when the time comes. That means we train harder than ever. We broaden everybody’s abilities. And we need to take every move, every spell, every trick up a notch. That includes broadening our minds. We need to anticipate the Revinir’s moves. She is the most powerful enemy we’ve ever faced, and we need to be smarter than her. I’m not going to sleep until I come up with a way to beat that monster.”

“It’s just an expression,” Florence said with a snarl. “Intensive training begins first thing in the morning on the lawn. We need everybody present.”

“Everybody everybody. Not just Artimé this time. I mean everybody.”

Simber gazed at her. “Ourrr allies, you mean?”

Florence nodded seriously. “I’ll go alert our friends on Karkinos and see if they can track down Spike and Talon, who are still out searching for Issie’s baby. Send Scarlet and Thatcher to fetch the people of Warbler, and Lani to speak to the people in Quill. Tell Seth to get our friends from the Island of Shipwrecks.” She paused for a breath, then said in her sternest voice, “We will not fail Fifer and Thisbe. We will not let Artimé down, or anyone in the world of the seven islands. Not this time. Not ever again.” She turned to look into Rohan’s eyes. “I’m counting on you to step up now that I’ve lost my two main players.”

“I will, Commander Florence,” said Rohan.

With that, Florence left the two standing at the entrance and turned sharply, heading out the door into the evening, marching into the water toward Karkinos.

Rohan looked at Simber, fear and awe in his eyes. They were calling in everyone the people of Artimé knew. This was a major deal.

Lisa McMann lives in Arizona. She is married to fellow writer and musician, Matt McMann, and they have two adult children. Her son is an artist named Kilian McMann and her daughter is an actor, Kennedy McMann. Lisa is the New York Times bestselling author of over two dozen books for young adults and children. So far she has written in genres including paranormal, realistic, dystopian, and fantasy. Some of her most well-known books are The Unwanteds series for middle grade readers and the Wake trilogy for young adults. Check out Lisa's website at LisaMcMann.com, learn more about The Unwanteds Series at UnwantedsSeries.com, and be sure to say hi on Instagram or Twitter (@Lisa_McMann), or Facebook (Facebook.com/McMannFan).