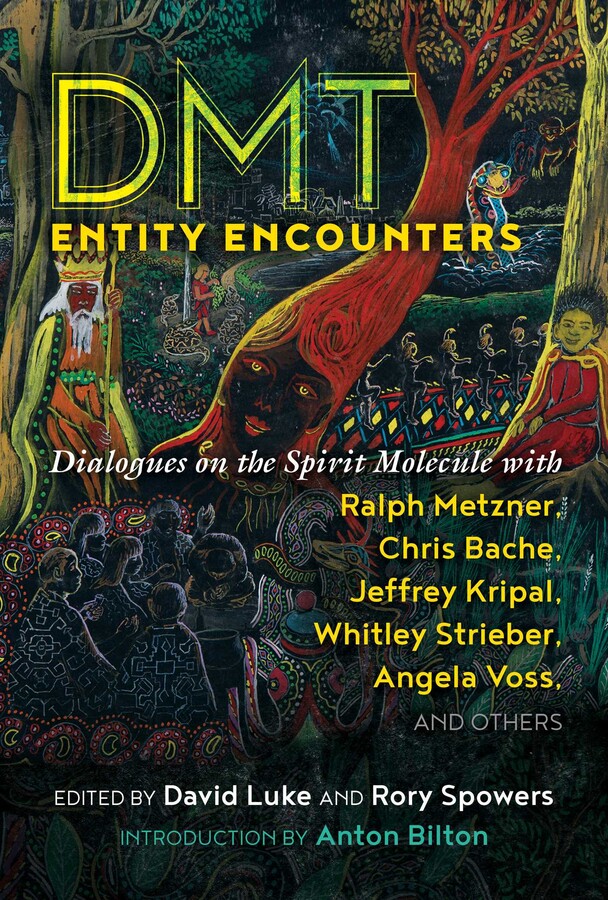 Found throughout the plant and animal kingdom, DMT (dimethyltryptamine) is also naturally occurring in humans, where it is released during near-death and actual death experiences, earning it the title “the spirit molecule.” When taken as a psychedelic, either via ayahuasca or in pure form, DMT is experientially considered to be the strongest and strangest of all entheogens. The majority of high-dose users report visions of unknown yet curiously familiar alien worlds and encounters with sentient nonhuman presences.

This book distills the potent exchange of ideas that occurred at Tyringham Hall, including discussions on DMT beings, encounter experiences, alien abduction, plant sentience, the shamanic use of ayahuasca, neuroscientific DMT research, the connections between LSD and DMT entities, and the nature of mind and reality.

If it’s possible to map the effects of DMT in the brain with a proper temporal and spatial resolution, can we actually figure out what’s happening in the brain and in the experience, in the right moment? With the right precision? And finally, can we map some of the elements of the DMT experience? Can we actually map the subjectively-felt entity encounters? Can we map this breakthrough into this different “space,” this different “place”? Can we actually see how realities are being built in terms of brain activity? Not only that, but can we map these experiential transitions--can we map the initial geometrical phase into this breakthrough DMT phase? Can we map the initial encounter?

To do that we split our research into two main stages. The first one corresponded to a dose-finding study of DMT, in which we administered different doses of DMT to different people in a safe environment, using EEG (a non-invasive neuroimaging technique), which we’ve now finished, and in the second phase, which we haven’t begun yet, we want to actually map the effects of DMT in terms of brain activity but using both EEG and fMRI scanning. So we’re using advance neuroimaging techniques that allow us to understand when things are happening in the brain with the right temporal precision provided by EEG to get rhythmic patterns in the brain. These rhythmic patterns allows us to map certain states of consciousness, whereas fMRI allows us to understand where are things happening in the brain, what is the precise location where these experiences can be mapped, and what are the neural circuits that are modulated by DMT administration.

In terms of brain activity measured with EEG, we know that in normal resting conditions the alpha band is the most prominent rhythm of synchronised activity in the brain, and in terms of rhythmic patterns these correspond to synchronised activity which is very prominent when people have their eyes closed. This is how people were before receiving the drug, wearing eyeshades with eyes closed. We found that the alpha band was massively reduced after the administration of DMT compared to placebo, and this fits quite well with what has been seen in ayahuasca research, especially ayahuasca research that has looked at the specific contribution of DMT in terms of brain activity. There’s also a strong relationship between reductions in alpha frequencies and DMT, and the blocking of the serotonin 2A receptor, the main receptor linked to psychedelic activity. And our results are quite consistent with this.

This is interesting but it doesn’t tell us about the dynamics of the experience. It doesn’t really tell us about how the experience is unfolding moment by moment. To explore this, we collected intensity ratings from 0-10 of the experience every minute and we saw a nice dose relationship between intensity and dose. We also used these intensity ratings in a creative fashion to do a micro-phenomenological interview to see what was going on in the experience and also trying to capture specifically where the entity phenomena was occurring within the experience itself. So a second interview was done by a collaborator from the University of Oxford, Raphaël Millière, in which he used these temporal anchors related to the intensity of the experience to remind people what was happening at that moment so that people could tell us in detail what was their lived experience. For example, we could have asked, “When you gave us a rating of 8 at the first minute what was going on?” and the participant would say, “Well at that stage I was having a bit of nausea, I was seeing green lights.” Then we would ask, “What happened when you gave us an intensity rating of ten?” and the participant would say, “Yes, I started to have difficulty breathing, there was intense pressure, I started seeing balls of lights,” and so on.

So this is a disciplined way to get a nice temporal resolution of what the experience is about and how it unfolds. As you can see in the progression of effects, in one example, you can locate the entity experience at minute 5, you get the apparition of human shadows. The entity encounter is being mapped out in a nice fashion during the experience, so in another example we have aliens popping up at minute 3 and you get a detailed description of what was going on precisely, and then another participant had goblins popping up quite early on in the experience between minute 0 and minute
1. Finally, one had the Indian Hindu goddess Kali popping up at minute 4.
What’s nice about this is not only do we have the opportunity of looking at when the entity phenomena is occurring precisely in the experience itself but we can then relate this temporal resolution with what we are seeing in the brain. For example, in one participant we can see the synchronized alpha activity popping up quite strongly and quite fast, and then recovering slowly as the experience went on. And when you actually put the intensity ratings on top of this and do some statistical analysis you can see that there’s a strong relationship between the intensity ratings and alpha waves. Then, with the micro-phenomenological interviews we have a dynamic way of measuring this as the experience is unfolding and of seeing what is happening in the brain minute by minute. What we hope to do with this is to relate the entity encounter or specific aspects of the experience to specific brain activity in the fMRI study. It’s a novel way of approaching brain imaging and experience and bridging the two together in the best possible way.

What we want to do in the future is study neural signatures that can help us identify aspects of the activity that are related to the specifics of the DMT experience, such as entity encounters, reports of how the body opens up to this geometrical space, and localizing neural signatures associated with specific cognitive phenomena very much in the line of what Michael spoke about yesterday. Also we want to find ways to map out these different facets of what we are seeing popping up in the lived experience that are related to the entity phenomena. Once we develop these neural signatures per person we then may be able to see what the experience is about. With this approach hopefully we will see what the brain data tells us about the experience, which would enable us to try to map out these entity encounters in the brain or other interesting aspects of the experience.

Michael Winkleman: I have three interrelated questions. One is you talked about alpha power, can you explain a little bit about that in terms of what’s power versus coherence versus the relative preponderance of different ranges. Secondly, you said that alpha and beta were reduced in the brain, but your diagram talked about the occipital lobe, so was it just the occipital or the whole brain? And thirdly, if it’s not too much at all, these reductions in alpha and beta don’t necessarily imply that delta, theta, and/or gamma were increased.

Chris Timmermann: In the analysis we are actually starting to see some associations between theta and delta and the intensity of the experience. High frequencies like gamma, I’m not so sure about in psychedelic studies especially in serotonergic psychedelic drugs because there’s a lot of muscle activity going on. We are seeing effects most prominently in alpha, a little effect in beta, but alpha is the main one. We saw the effects all over the scalp. I showed a representation of the occipital sensors as it was easier to show that representation, but we marked effects on occipital areas and it’s something that we’ve seen with the other psychedelics as well, very much related to imagery. In terms of what alpha power means, it means the amplitude. You have oscillations in the brain and these are sine waves, and power is how pronounced this is in the vertical axis, and this is related to how strongly or synchronized patches of neurons are acting in the brain. What you are seeing here, in a vague way, is that you’ve got desynchronization, where synchronic activity of these patches of brain activity are becoming desynchronized, less predictable, less stable. Coherence is much more about phase, and how the actual curves of the wave between sensors are working at the same time. We haven’t looked at coherence or connectivity measures yet, it’s just plain power analysis so far.

Ede Frecska: In neuroimaging studies on meditation they prefer to use experienced Buddhist monks, so in your studies of entity encounters do you plan to study those experienced in entity encounters? I am thinking about initiated shamans. This is their job, you know, to get into contact with entities. This is what they do in meditation research. They wouldn’t use just experienced DMT users as they are far less experienced than initiated shamans. During initiation, something happens within the brain which totally changes perception. Shamans are called seers in many cultures.

Timmermann: I think that is a very interesting proposition, I haven’t thought about it that way. I knew about the parallels between meditation, so I thought about psychonauts, it was the initial idea, but yeah, shamans in terms of entity encounters.

Frecska: The point is you want to dig deeper into entity phenomena you must turn to those who are the experts. Because you can get very important, relevant information.

Timmermann: It is very useful, yeah, I wonder if shamans are willing to get DMT infusions though, I mean…

Frecska: I could find some who are. Timmermann: Yeah, you know some? [laughs] Ok cool, yeah, then we should speak about that. . . .