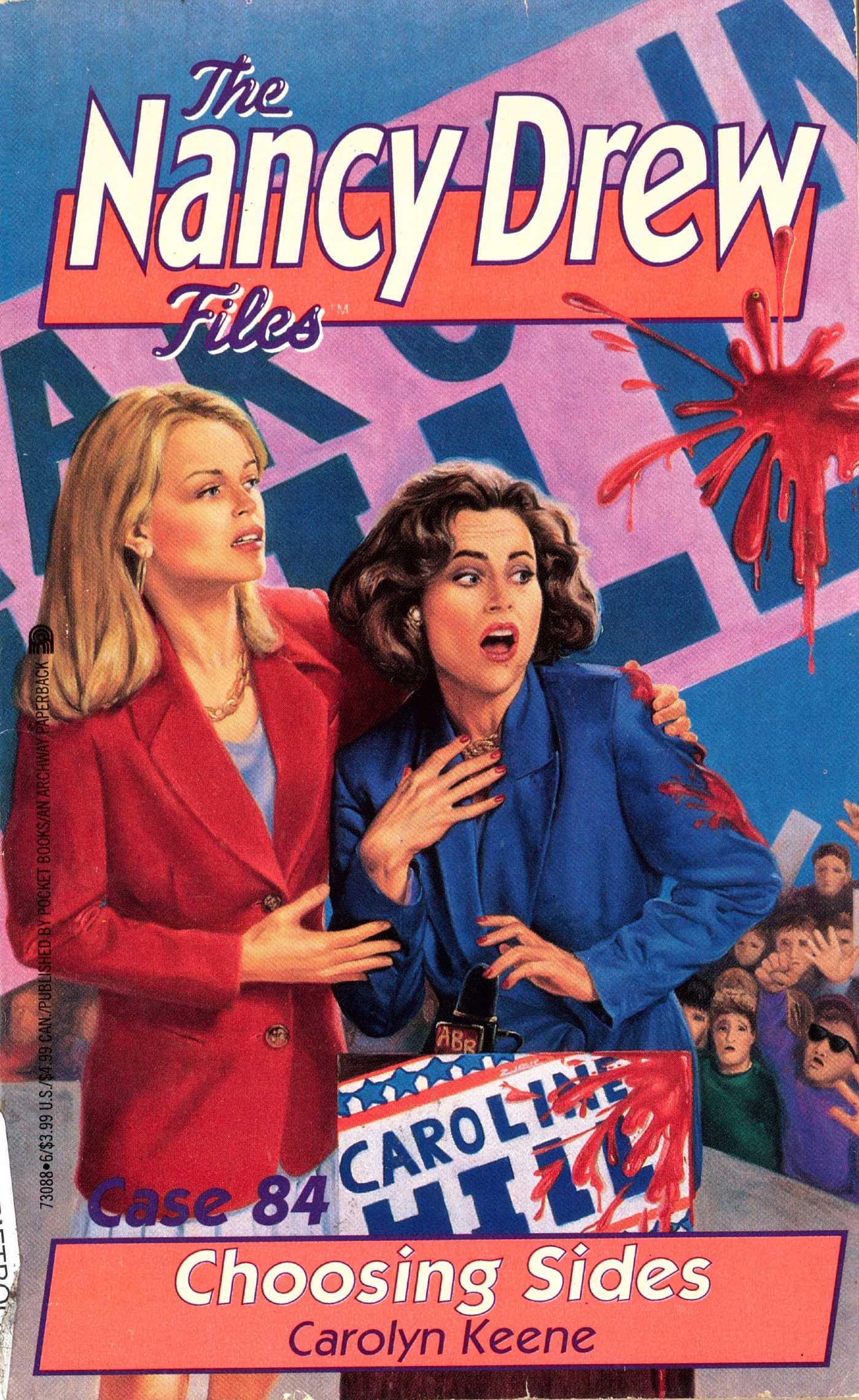 River Heights is about to elect a new mayor, and every candidate will have to take a stance on crime. But Nancy’s choice, District Attorney Caroline Hill, apparently doesn’t have a leg to stand on. Small-time hoodlum Bobby Rouse has implicated the DA in a bribery scandal, threatening her integrity and her chances for victory.

Nancy’s convinced that Caroline is the victim of a frame-up, but before finding the proof, she has another victim on her hands—Bobby Rouse, victim of murder. Politics can be a dirty business, and it’s up to Nancy to root out the corruption. Fearing that the election will be decided not by ballots but by bullets, Nancy knows this is one race she can’t afford to lose.

George is going to miss Out on a great party tonight," Bess Marvin said. "Too bad she's playing in that tennis tournament in Chicago this week." She pushed back her long, blond hair, then handed a piece of masking tape to her friend Nancy Drew, who was standing on a stepladder in the front hallway of the Drews' home.

"Not to mention that she won't be around for the whole rest of the mayoral campaign," Nancy added. "George really wanted to help Caroline Hill win." She stuck the tape on the corner of the paper banner she was hanging over the arched doorway to the living room.

Caroline Hill was the district attorney of River Heights. Nancy had gotten to know her through her father, Carson Drew, a noted criminal lawyer. When Caroline decided to run for mayor,

Nancy and Bess had eagerly volunteered to help out.

"Well, you and I will have a great time working on Caroline's campaign, anyway. Going to the rallies" -- she grinned -- "meeting cute guys . . .

"Definitely," Nancy agreed. Not that she wanted to meet anyone new. "I hope Ned can make it. He's been so busy with midterms that I haven't been able to reach him this week. I even got an answering machine so I wouldn't miss his calls, but so far he hasn't had time to phone." She blew a lock of reddish blond hair out of her eyes and gazed critically at the sign she had just hung.

Ned Nickerson, Nancy's boyfriend, was a student at Emerson College. She didn't get to see him often, and she really missed him.

Hearing footsteps on the stairs, Nancy turned to see her father coming down. He was wearing slacks and a sweater. His dark hair was graying at the temples, and he had the same blue eyes as Nancy.

"What do you think of the poster, Dad?" she asked, climbing down the ladder.

"'Caroline Hill, the Right Choice for Mayor of River Heights,'" Carson Drew read out loud. "It looks great!" He went to the closet and put on a windbreaker. "I have to run out to pick up the P.A. system for Caroline's speech tonight." Giving Nancy and Bess a warm smile, he added, "Thanks for giving up your Sunday to help get everything ready for tonight's fundraiser."

"It's been fun," Bess said. "I never knew how much went into something like this."

"It's worth the trouble. Caroline is an old friend of mine," Mr. Drew said. "We've faced each other in court a lot. I miss seeing her there since she's taken time off to campaign."

Bess sat down on the bottom step of the staircase. "It's hard to believe that in ten days, Sam Filanowski won't be mayor anymore. He's been mayor of River Heights nearly all my life."

"Fifteen years," Nancy put in. "If he hadn't had that heart attack a few months ago, I doubt he would have decided to step down."

"You're probably right," Mr. Drew said. He glanced at his watch. "It's nearly five. I have to run. "

A few minutes later, Hannah Gruen, the Drews' housekeeper, poked her head around the kitchen door. The cheerful, gray-haired woman had lived with the Drews since Nancy was three, and she was just like family to Nancy and her father.

"Nancy, someone just pulled up in the driveway," Hannah said. She nodded toward the poster over the living-room doorway. "Oh, that looks nice!"

"Thanks," Nancy said, grinning. "Come on, Bess. I bet that's Hector. He said he was going to stop by with all the freebies for tonight."

As the two girls hurried out the front door, Nancy saw Hector Alvarez, Caroline's campaign manager, pulling two cardboard boxes out of the trunk of his car. He had black curly hair and a compact build.

"What's in the boxes?" Bess asked, taking one of them from him and heading back to the house. Hector and Nancy followed, with Hector carrying the second box.

"Open them up, open them up!" Hector bubbled. He set his box down next to Bess's in the foyer. "I want to hear what you two experts think of the stuff we'll be giving away at the fundraiser tonight."

Nancy was already tearing open one box. She pulled out a neon green T-shirt and held it up. Huge block letters across the front read: THE ANSWER: HILL FOR MAYOR.

"Everyone's going to love those," Bess agreed. Hector grinned. Then he opened the other box and started digging through it. "I've got Hill for Mayor caps in lots of colors, too. Here, try this."

He handed Bess a neon orange cap. She put the hat on and turned to look at her reflection in the small mirror next to the Drews' front door. "Cool!"

Turning to Hector, Nancy asked, "How do the polls look? Have you gotten the latest results?"

"Sure did," he replied, his dark eyes crinkling in a smile. "We're beating Patrick Gleason by ten points."

"Great!" Nancy and Bess said together.

"But we're not in the clear," Hector cautioned. "I happen to know that Gleason is doing a media blitz this week. He's spent a lot of money on TV and radio commercials. Election day is a week from Tuesday. We've got to keep hustling."

"That means tonight's fundraiser is really important," Nancy said. "If Caroline wants to compete with Gleason's ads, she'll need to raise a lot of money. I've just been assuming that Caroline would win."

"You know," Bess said, "my dad works with Patrick Gleason on the city council. Dad says that Gleason is a good guy but that Caroline would make a better mayor. "

"Everyone likes Gleason," Nancy pointed out. "He's got three kids, and he's a former basketball star and coach at Emerson College. . . ." Her voice trailed off.

Hector looked from Nancy to Bess. "You two are acting as if the election is over and lost. Cheer up! Tonight's party is going to be great, and next week we'll be celebrating!"

"Bess, why don't you take a break," Nancy said a few hours later. "I'll take over for a while." She and Bess had been passing out trays of hors d'oeuvres since guests had started arriving an hour earlier.

"Okay, if you're sure. I wouldn't mind taking a break to listen to Caroline's speech."

Just then Carson Drew's amplified voice rose over the din in the crowded living room. "Ladies and gentlemen, could I have your attention, please!"

As Bess went to return her empty tray to the kitchen, Nancy stood on tiptoe to spot her father through the crowd. He was standing at the far end of the room.

When the crowd quieted down, Mr. Drew said, "Although we were often opponents in the court room, I have always had nothing but the highest regard for Caroline Hill's integrity, moral strength, and sharp mind. These qualities, combined with her knowledge of city government and environmental law, make her the only logical choice for the mayor of River Heights. But Caroline is here to speak for herself. Ladies and gentlemen, Caroline Hill!"

The crowd clapped loudly and cleared a space as an attractive woman in her early forties stepped forward. She had sleek, chin-length brown hair and large hazel eyes, and she was wearing a plum-colored linen coatdress. Nancy had to admire her cool, professional style.

"I am here tonight because I believe in the future of River Heights," Caroline began in a clear, sure voice. She went on to list her plans for bringing recycling to the town, increasing public transportation, and cleaning up the Muskoka River. Everyone was silent as she spoke, but the whole house erupted in cheers and applause when she finished.

Nancy grinned as everyone crowded around Caroline and started talking enthusiastically. Several people were taking out their checkbooks. It looked as if the fundraiser was going to be a success!

As Nancy started to work her way through the crowd with her tray of fried wontons, a familiar voice spoke up behind her.

"Excuse me, miss. I'm looking for a gorgeous young redhead, about your height?"

Nancy spun around. "Ned, you're here!" she cried, looking at her handsome boyfriend. He was wearing a white shirt and khaki pants, and his wavy brown hair was still damp from a recent shower. Nancy stood on her toes to kiss him.

"I don't know if the staff should be kissing the guests," he joked when they pulled apart, "but I kind of like it."

"How are you, Ned?" Nancy said in a rush. "How did all your midterms go? You look a little tired." She reached up with her free hand and lightly touched the dark circles under his eyes.

Ned chuckled and helped himself to a fried wonton from her tray. "I'm beat," he admitted, "but everything went fine. I think I even aced a couple of tests." He looked around the room.

"But you didn't have to throw a party just for me, Drew."

"Anything for you, Nickerson," Nancy replied, grinning.

Nancy frowned. "Didn't your roommate tell you? I left a message -- " she began.

"Ease up," he said lightly, reaching for another wonton. "We haven't had time to do anything but study and write papers. You should see my pile of dirty laundry!"

Nancy relaxed. "Sorry, Ned," she said. "It's just that I've been so wrapped up in this election."

"I know what you mean. Something tells me that I'm not going to be getting a lot of rest until election day."

Nancy was puzzled. "So you do know about the election?"

"Then your roommate did tell you," Nancy insisted.

"That I'm working for Caroline Hill," Nancy said impatiently. "This party is a fundraiser for her campaign."

Ned's pleasant expression faded. "Are you telling me that you're working against Patrick Gleason?"

Nancy laughed nervously. "Of course. I want Caroline Hill to be elected. Don't you?"

"Not at all," Ned said coolly. "As a matter of fact, I've already told Patrick Gleason that I'm going to help out with his campaign!"

Nancy stared open-mouthed at Ned. She couldn't believe what she was hearing. Her boy friend was working for the opposition!