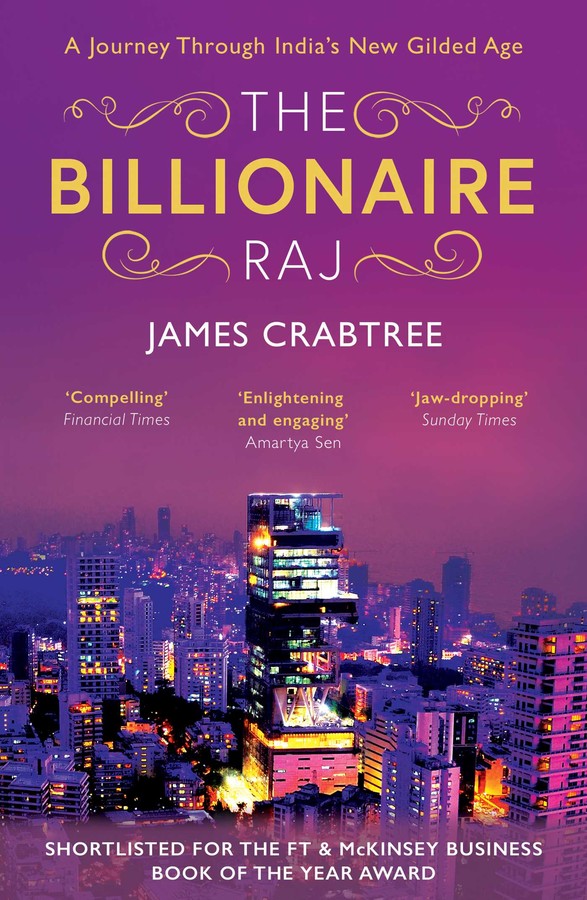 
India’s explosive rise has driven inequality to new extremes, with millions trapped in slums as billionaires spend lavishly and dodge taxes. Controversial prime minister Narendra Modi promised ‘to break the grip’ of the Bollygarchs, but many tycoons continue to thrive amidst the scandals, exerting huge influence over business and politics.

But who are these titans of politics and industry shaping India through this period of breakneck change? And what kind of superpower are they creating?

A vivid portrait of a deeply divided nation, The Billionaire Raj makes clear that India’s destiny – prosperous democratic giant or corrupt authoritarian regime – is something that should concern us all.

‘Compelling…vivid…Crabtree has given us the most comprehensive and eminently readable tour of economic India.’

‘An excellent survey of India’s economic and political transformation… Crabtree’s Indian story is a cautionary tale of globalization’s excesses and the consequences for one of the world’s most unequal societies.’

‘A vivid comparison to America’s late 19th-century Gilded Age drives this account of 21st-century India, with a teeming, colourful cast of the super-rich, the ultra-poor, the politically ambitious and the irredeemably corrupt.’

‘Timely reading…Crabtree’s eye for detail…gives some nice close ups…With so many tasty details, it is the right sort of snack to fill a hole as we watch and wait.’

‘The analysis really sings when Mr Crabtree finds new ways to capture the collision of profits, politics and public opinion. His account of India’s cut-throat network-TV industry, through the eyes of a star presenter, is thrilling.’

‘A pacey and perspicacious account… Crabtree’s unique achievement is to probe the peculiarities of Indian cronyism and lay out its structural causes… For sheer chutzpah, India’s billionaires provide tremendous value. All this makes for a thoroughly entertaining book, but also for a sadly enfeebled and unequal nation.’

‘A reporting gem, The Billionaire Raj deserves to be widely read.’

‘An eye-opening book from someone who clearly loves his subject.’

‘A lively and valuable blend of the empirical and the anecdotal… The best parts of Mr. Crabtree’s book, however, aren’t his observations on the civic state of India (although these are certainly valuable and wise). They are his reportage, in which he relates his encounters with several of the men who are emblematic of the billionaire raj.’

‘James Crabtree, once a hugely-admired star foreign correspondent, has transformed himself into a brilliant writer and analyst of the Indian super-rich. This timely, fascinating and eye-opening book is also – a rarity for a book about money – wonderfully witty and beautifully written.’

‘An enlightening and engaging story of wealth and poverty in India, but also a sad indictment of the power of inequity in subduing and overwhelming its areas of success.’

– Amartya Sen, winner of the Nobel Prize in Economics

‘Crabtree’s stylish writing and sharp insights bring to life the extremes of a country changing with bewildering rapidity, and one the world will find increasingly hard to ignore. The Billionaire Raj is an essential guide if you want to understand modern India, as you must.’

– Edward Luce, Chief US Commentator, Financial Times, and author of In Spite of the Gods: The Rise of Modern India

‘Billionaire-watching may seem like voyeuristic fun, but it also provides serious insights about where a nation is headed. James Crabtree does just that in The Billionaire Raj, as he traces the incredible rise of India’s new super-rich and everything they reveal about the state of India’s political economy. Mixing colourful anecdotes with serious analysis, Crabtree’s urgent book gives us far more than just vicarious thrills about India’s new Gilded Age.’

– Ruchir Sharma, author of The Rise and Fall of Nations

‘A lucid, detailed and at times epic account of the new India… A must-read for all those interested in the political and economic destiny of the subcontinent.’

– Robert D. Kaplan, author of Monsoon and The Return of Marco Polo’s World

‘A fascinating look into the world of the Indian business elite…shedding considerable light on whether the country will sustain the miracle that is the Indian democracy or go the way of populism and authoritarianism as so many others have.’

‘James Crabtree distinguished himself as the most insightful journalist writing for the Financial Times from India. It is not surprising therefore that he has now written a book that offers a splendid overview of the issues that have been raised concerning India’s spectacular growth since the reforms began in 1991. It is bound to become a classic.’

– Jagdish Bhagwati, author of In Defense of Globalization

‘In this eye-opening rumination on wealth, power, and those who seek both…Crabtree brings a reporter’s precision and flair to his story… An inside look into the corridors of power, this is an invaluable commentary on Indian democracy and the forces that threaten it.’

‘A wonderful book! It artfully weaves together lively stories of India’s billionaires while retaining a balanced perspective on the big picture of the rise of India. It is not easy to write contemporary history but Crabtree manages to get to the heart of the matter – the problem of India’s state capacity and the need to reform the institutions of governance.’

– Gurcharan Das, author of India Unbound and The Difficulty of Being Good

‘Who are the Indian nouveau riche and what do they want? James Crabtree’s The Billionaire Raj will prove the defining work on these questions. It is a must-read for anyone interested in wealth, inequality, India, or the evolution of capitalism.’

– Tyler Cowen, economist, blogger and author of The Great Stagnation