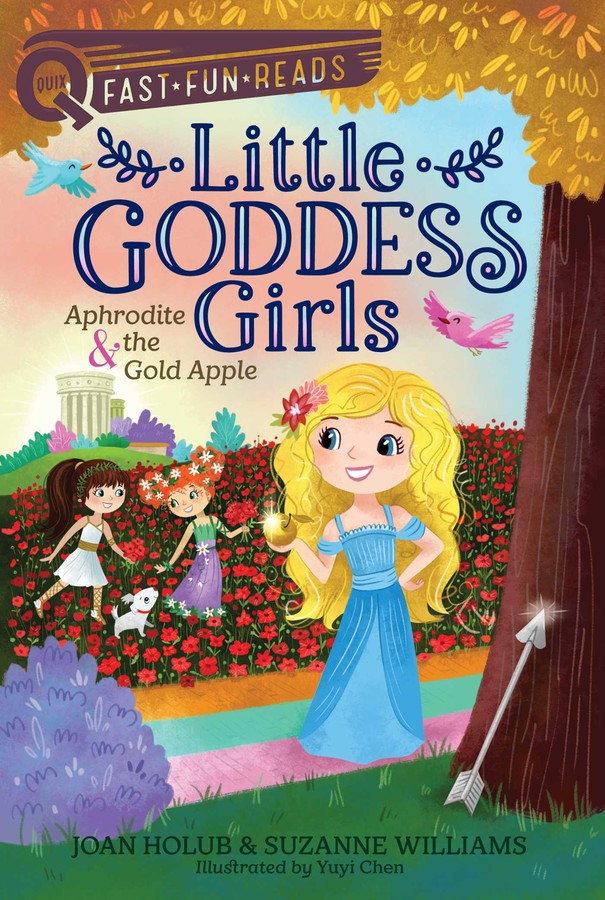 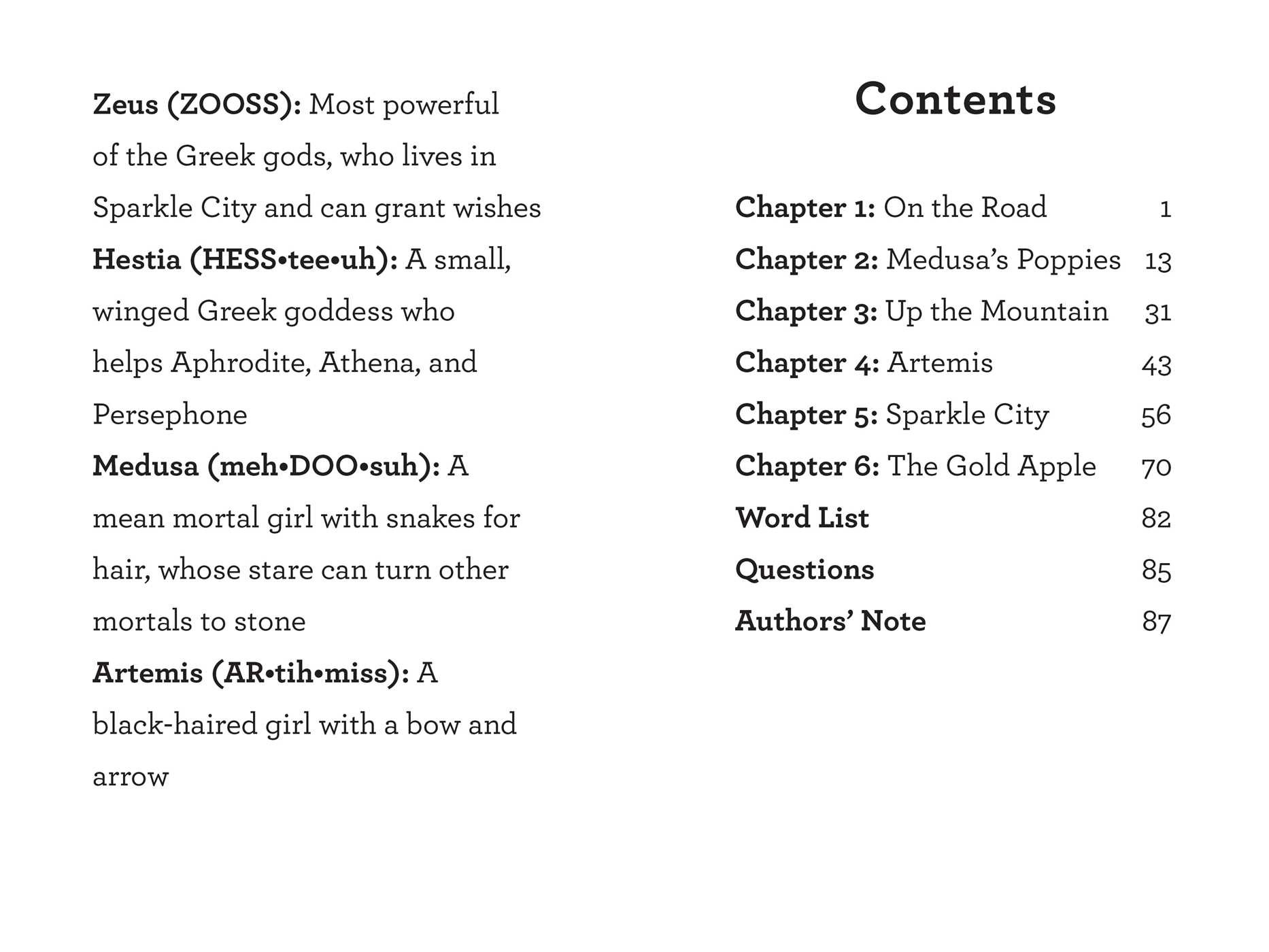 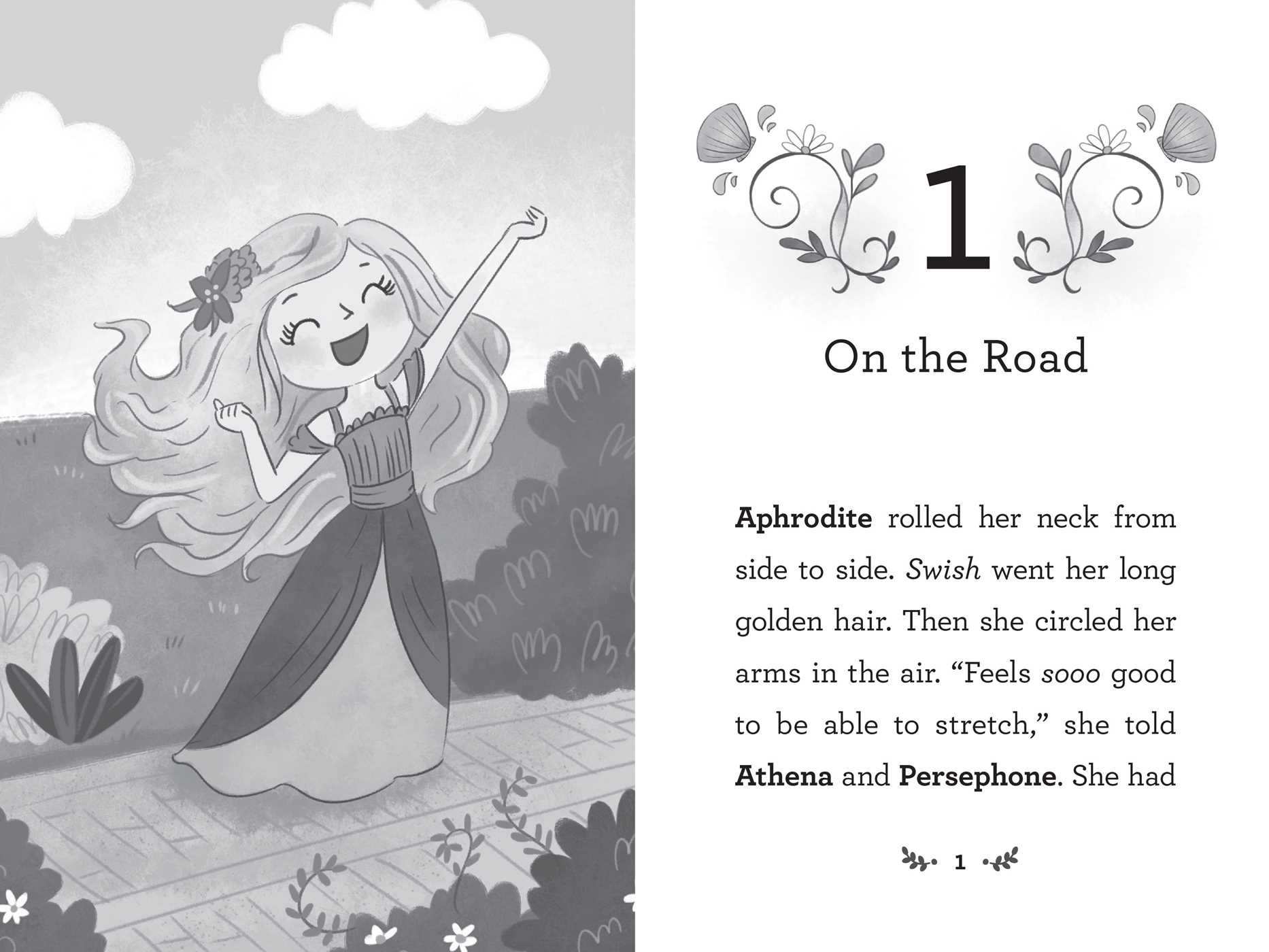 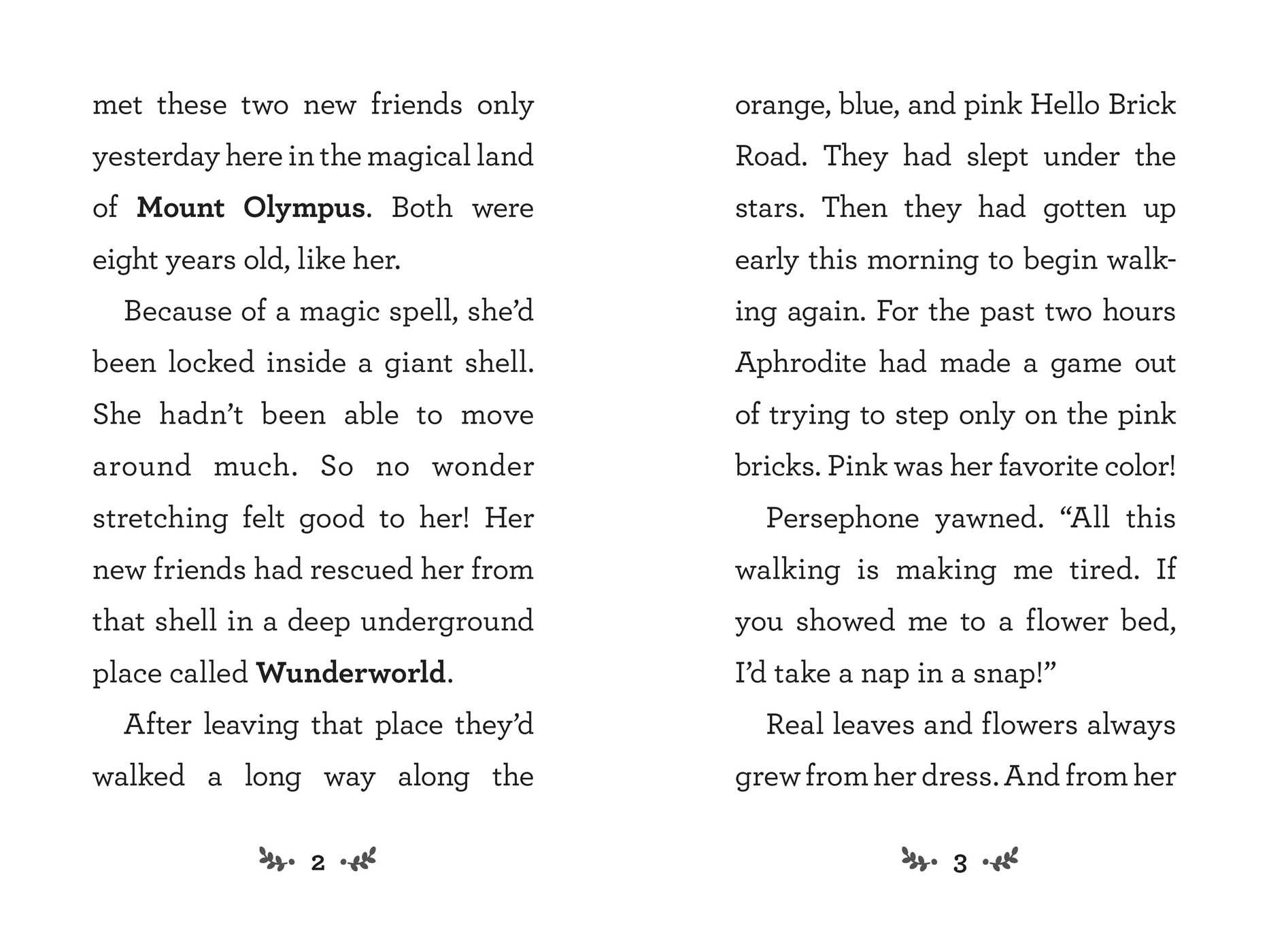 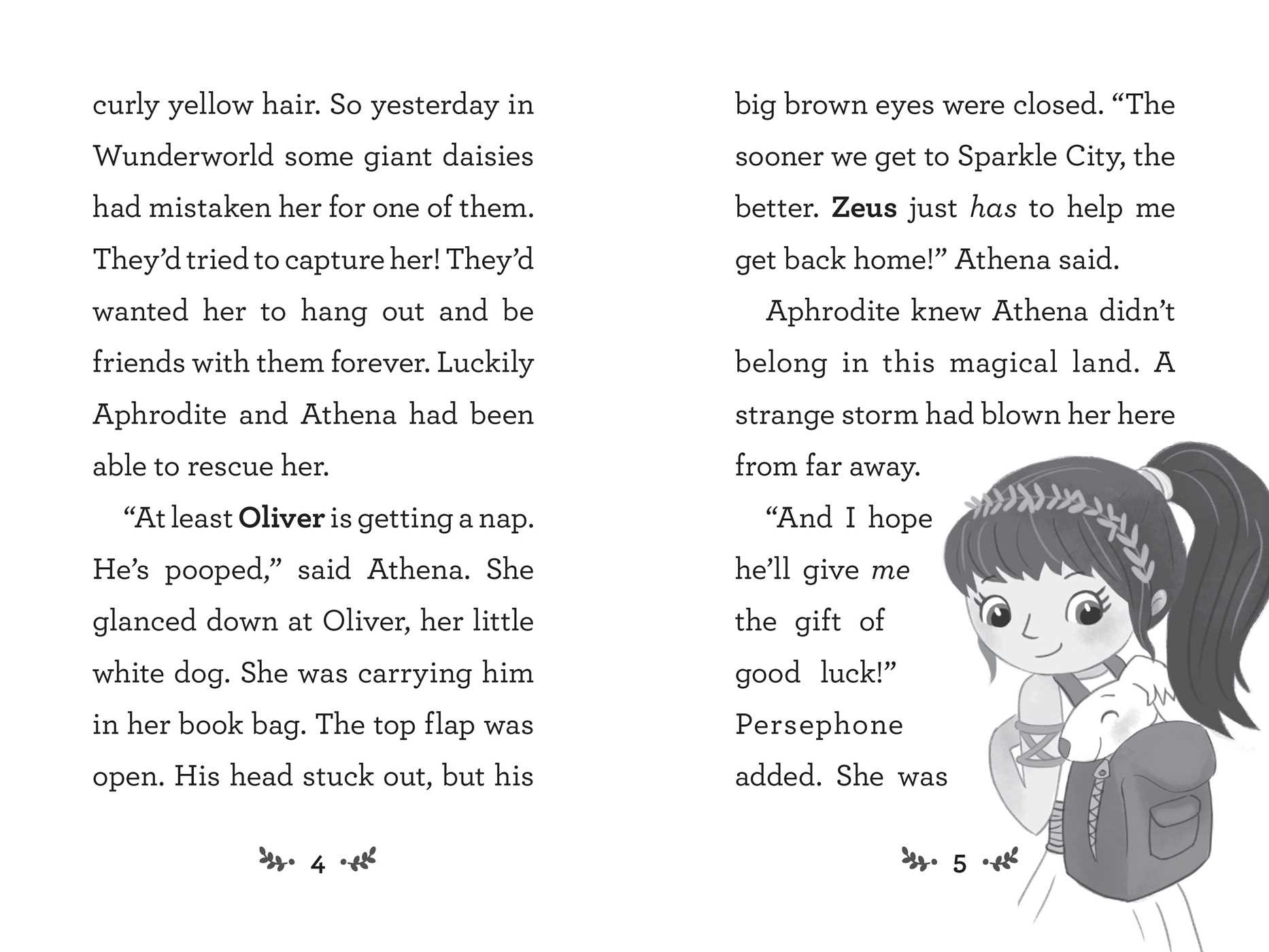 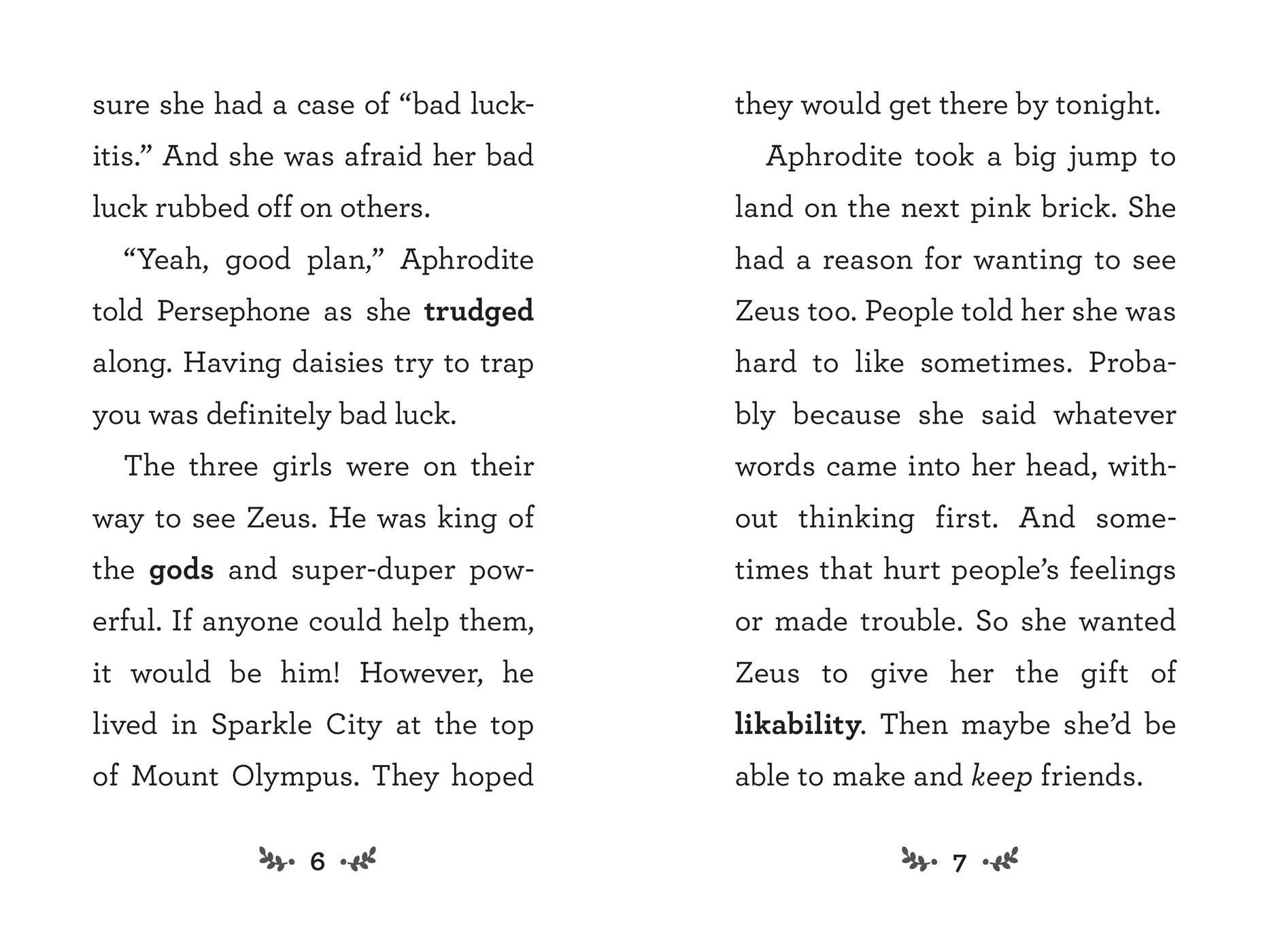 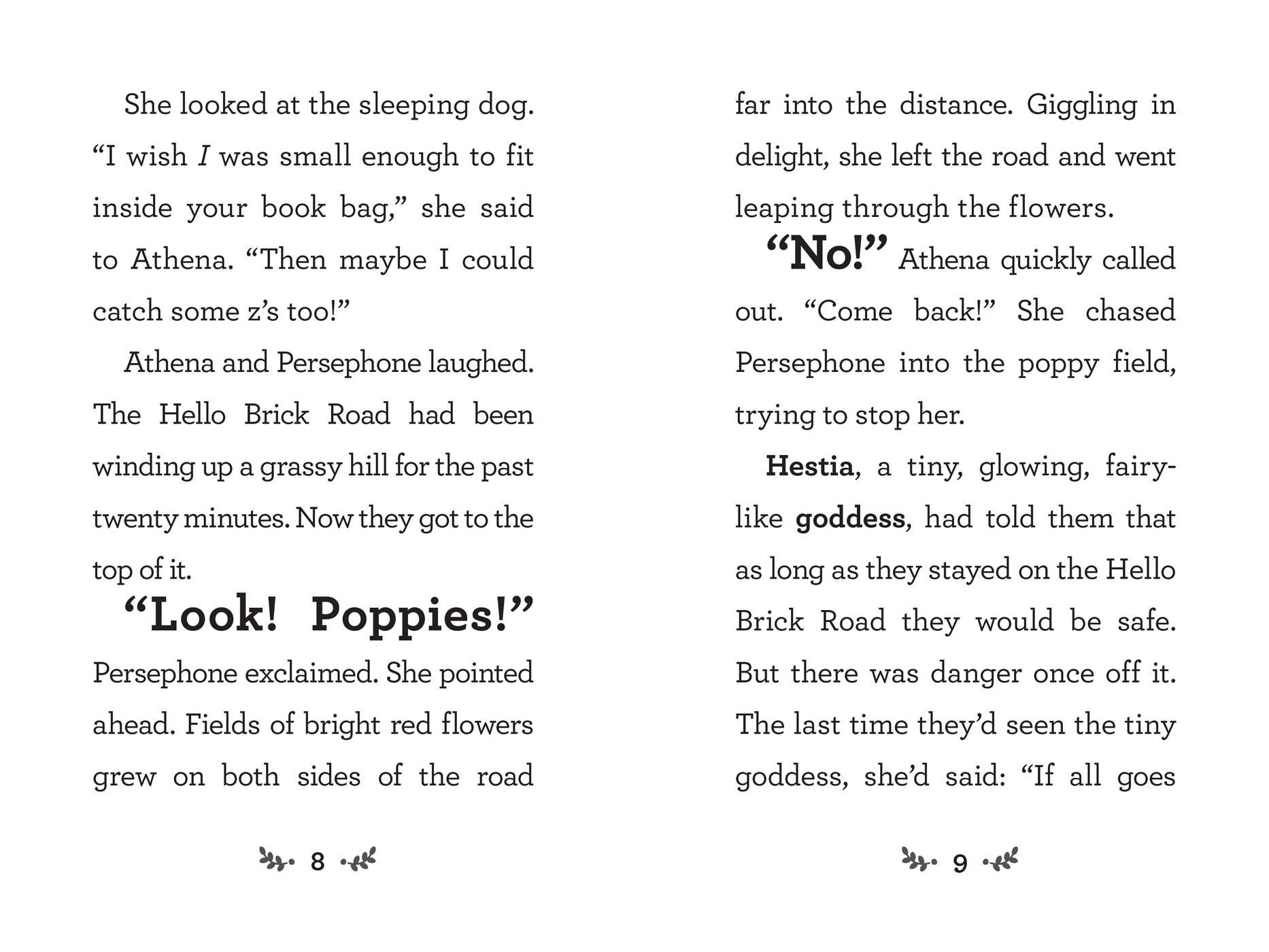 Join little Aphrodite for a sweet adventure in this third Little Goddess Girls story—part of the Aladdin QUIX line!

Aphrodite is excited to be on an adventure to Sparkle City with her new friends, Athena, Persephone, and Artemis. After being rescued from her magical sea shell, Aphrodite hopes the super-duper powerful Zeus can give her the gift of likeability. Aphrodite knows that will make her be a better friend, especially to the girls she met on the Hello Brick Road. But when she finds a magical, gold apple along the way, something makes her keep it a big secret from the others. Will those magical powers help Aphrodite with her big ask for Zeus? Or will Aphrodite discover a very different kind of magic—the magic of friendship—is most important of all?

Chapter 1: On the Road 1 On the Road
Aphrodite rolled her neck from side to side. Swish went her long golden hair. Then she circled her arms in the air. “Feels sooo good to be able to stretch,” she told Athena and Persephone. She had met these two new friends only yesterday here in the magical land of Mount Olympus. Both were eight years old, like her.

Because of a magic spell, she’d been locked inside a giant shell. She hadn’t been able to move around much. So no wonder stretching felt good to her! Her new friends had rescued her from that shell in a deep underground place called Wunderworld.

After leaving that place they’d walked a long way along the orange, blue, and pink Hello Brick Road. They had slept under the stars. Then they had gotten up early this morning to begin walking again. For the past two hours Aphrodite had made a game out of trying to step only on the pink bricks. Pink was her favorite color!

Persephone yawned. “All this walking is making me tired. If you showed me to a flower bed, I’d take a nap in a snap!”

Real leaves and flowers always grew from her dress. And from her curly yellow hair. So yesterday in Wunderworld some giant daisies had mistaken her for one of them. They’d tried to capture her! They’d wanted her to hang out and be friends with them forever. Luckily Aphrodite and Athena had been able to rescue her.

“At least Oliver is getting a nap. He’s pooped,” said Athena. She glanced down at Oliver, her little white dog. She was carrying him in her book bag. The top flap was open. His head stuck out, but his big brown eyes were closed. “The sooner we get to Sparkle City, the better. Zeus just has to help me get back home!” Athena said.

Aphrodite knew Athena didn’t belong in this magical land. A strange storm had blown her here from far away.

“And I hope he’ll give me the gift of good luck!” Persephone added. She was sure she had a case of “bad luck-itis.” And she was afraid her bad luck rubbed off on others.

“Yeah, good plan,” Aphrodite told Persephone as she trudged along. Having daisies try to trap you was definitely bad luck.

The three girls were on their way to see Zeus. He was king of the gods and super-duper powerful. If anyone could help them, it would be him! However, he lived in Sparkle City at the top of Mount Olympus. They hoped they would get there by tonight.

Aphrodite took a big jump to land on the next pink brick. She had a reason for wanting to see Zeus too. People told her she was hard to like sometimes. Probably because she said whatever words came into her head, without thinking first. And sometimes that hurt people’s feelings or made trouble. So she wanted Zeus to give her the gift of likability. Then maybe she’d be able to make and keep friends.

She looked at the sleeping dog. “I wish I was small enough to fit inside your book bag,” she said to Athena. “Then maybe I could catch some z’s too!”

Athena and Persephone laughed. The Hello Brick Road had been winding up a grassy hill for the past twenty minutes. Now they got to the top of it.

“Look! Poppies!” Persephone exclaimed. She pointed ahead. Fields of bright red flowers grew on both sides of the road far into the distance. Giggling in delight, she left the road and went leaping through the flowers.

“No!” Athena quickly called out. “Come back!” She chased Persephone into the poppy field, trying to stop her.

Hestia, a tiny, glowing, fairylike goddess, had told them that as long as they stayed on the Hello Brick Road they would be safe. But there was danger once off it. The last time they’d seen the tiny goddess, she’d said: “If all goes well, you’ll reach Sparkle City soon. But there’s danger ahead. Watch out for—”

Only before she could tell them what they needed to watch out for, her glowing light began blinking. And then… Pop! She’d disappeared.

“Ha! Danger doesn’t scare me!” Aphrodite had declared at the time. Even so, she didn’t stray from the road. She just hoped that her friends weren’t making a very bad mistake.

As she watched worriedly, both girls slowed and then sank to their knees. “Sooo sleepy,” Persephone murmured.

Athena yawned. “Me too.” They lay down among the poppies and began to snore softly.

“Wake up!” Aphrodite called from the safety of the road. But the two girls stayed fast asleep.

Suddenly Aphrodite heard a familiar cackle. “Eee-heh-heh!” A girl with wiggly green snakes for hair popped up from behind a tall clump of poppies near Athena.

“Medusa!” Aphrodite exclaimed, frowning. She was the one who’d used magic to trap Aphrodite in that shell!

Yuyi Chen began her career as a 3-D artist making video games, then realized her true passion is illustrating for children. She also likes to spend her time reading, listening to her children laugh, and pretending she’s a competitive cake decorator. She live in Washington with her two sons.