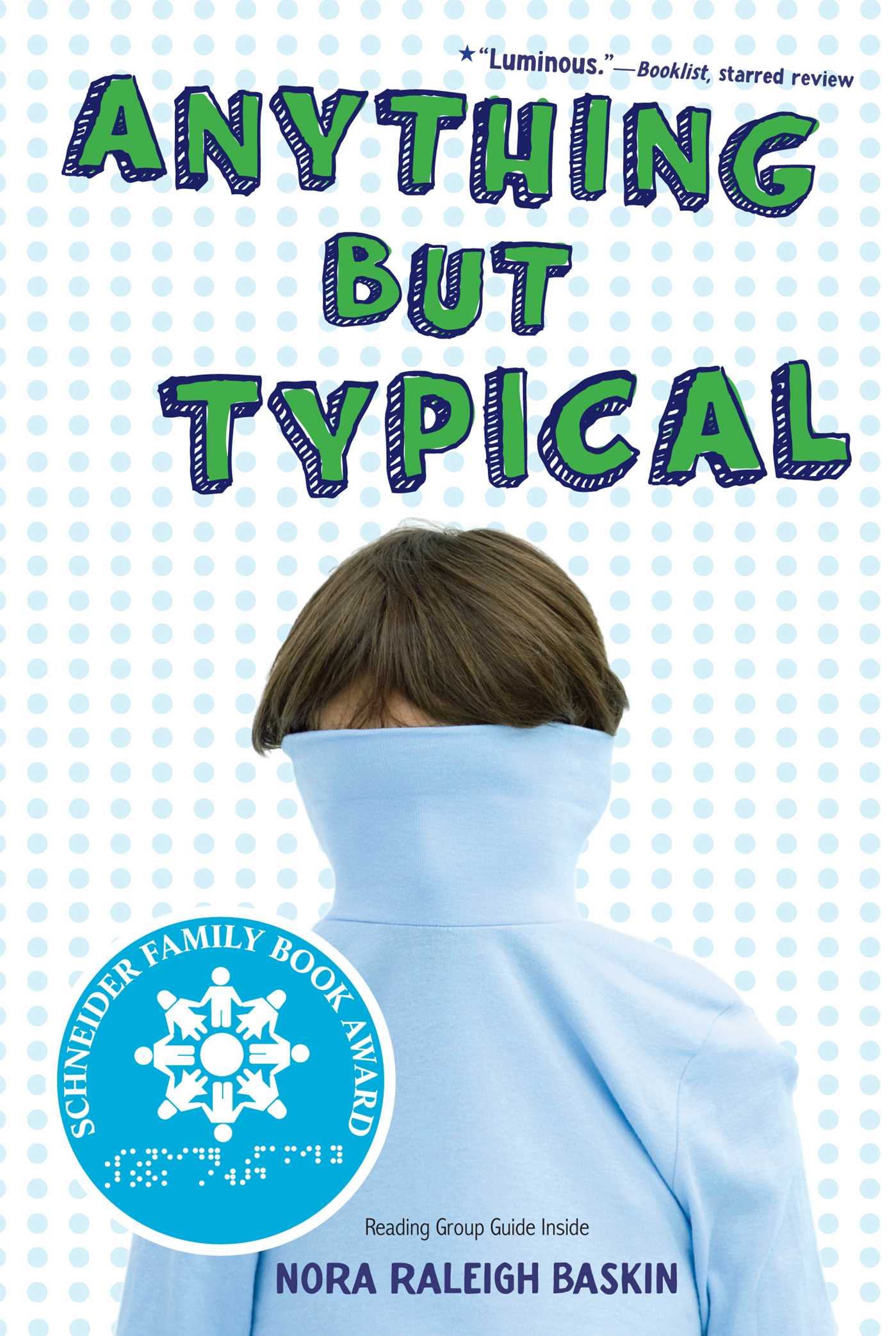 Author Nora Raleigh Baskin shares insight into ANYTHING BUT...

Told from the first-person perspective of an autistic boy, Nora Raleigh Baskin’s novel is an enlightening story for anyone who has ever worried about fitting in.

Jason Blake is an autistic twelve-year-old living in a neurotypical world. Most days it's just a matter of time before something goes wrong. But Jason finds a glimmer of understanding when he comes across PhoenixBird, who posts stories to the same online site as he does.

Jason can be himself when he writes and he thinks that PhoneixBird-her name is Rebecca-could be his first real friend. But as desperate as Jason is to met her, he's terrified that if they do meet, Rebecca wil only see his autism and not who Jason really is.

By acclaimed writer Nora Raleigh Baskin, this is the breathtaking depiction of an autistic boy's struggles-and a story for anyone who has ever worried about fitting in.

By clicking 'Sign me up' I acknowledge that I have read and agree to the privacy policy and terms of use, and the transfer of my personal data to the United States, where the privacy laws may be different than those in my country of residence.
Anything But Typical by Nora Raleigh Baskin
Reading Group Guide

Jason Blake is anything but typical. He tells his story in his own language, that of an autistic twelve-year-old boy. He is intelligent and sensitive, with many special gifts, and he is different. We learn of his sensitivity and “differentness” as he writes about his life and describes his world. Through his writing, which he posts on a writing website, he meets another young writer, Rebecca, who responds to the post of his story. Jason is intrigued with this girl in his life and fantasizes about her being his girlfriend. Jason’s challenges in school, socially, and at home all portray his difficulty in navigating normal life situations. Complicating his life is his desire to have a girlfriend, and his fear of meeting Rebecca and of her rejection becomes almost too much for Jason. By facing his fear and meeting Rebecca, he is able to grow and ultimately accept himself.

1)      How do we know, right from the beginning of the
book, that Jason is not a typical twelve-year-old?  Name some of the characteristics he exhibits. Are these behaviors things you have seen before?

2)      The letters NLD, nonverbal learning disorder, and ASD, autistic spectrum disorder, are labels used to identify the symptoms Jason displays. Describe what it would be like to have a conversation with Jason.

3)      Does it seem that Jason has a hard time understanding what other people are doing or asking of him? Give an example of a communication from Jason’s point of view. What things does he notice? What things are hard for him to tolerate? What things doesn’t he notice or respond to?

4)      What are some of the techniques his therapist suggests he use in order to communicate with NT (neurotypical) people? Do you think these are easy or hard for Jason to do?

5)      What does Jason do well? What is he particularly knowledgeable about?

6)      Describe Jacob’s relationship with his mother, father, and younger brother Jeremy. How has Jason learned to communicate with each of them? What do they do that makes communication with Jason possible? What about his relationships with his aunt, uncle, cousins, therapists, teachers, and librarian? Who is most successful communicating with Jason?

7)      Jason’s writing, and his use of the writing website, is an outlet that allows him to be anonymous and to be known to others without their awareness of his autism. What do we learn about Jason from his writings?

8)      When Jason and Rebecca begin to correspond on the writing website, how does it affect Jason’s life? Is he successful in sharing this relationship with others? How does it change how he feels about himself?

9)      Through the dialogue in the book, we get insight into how Jason’s mind works. Describe the difference between how Jason perceives things and how his “more normal” brother, Jeremy, does.

10)    In Chapter 10, Jason is sent home from school, after causing a huge disruption in art class. Everything about the episode shows us who Jason is and how he perceives his surroundings. Describe how Jason experienced the events of art class, and then present the point of view of the teacher and other students. Finally, once Jason is at home, how do his parents see it? We also find out more about how he feels about his parents. What does he tell us about his dad? His mom?

11)   In his story about Bennu the dwarf, Jason explores the possibility of a person being fixed of the thing that makes them different. What parallels can you draw between Bennu and Jason?

12)   When Jason’s parents reward him with a trip to the Storyboard convention, and he finds out Rebecca is attending as well, describe the dilemma that Jason faces. What is his biggest fear? How would you handle facing the same fear of exposing who you really are to someone you liked?

13)   How did Jason end up going to the convention? What does he tell us about his relationships with his dad and mom?

14)   What happens to Jason after he meets Rebecca? Is Jason’s reaction to Rebecca understandable? If you were Rebecca and had just met Jason, how do you think you would react? What questions would you ask yourself?

15)   During the convention Jason says that he will never write again. He feels himself shutting down. Do you think that he will continue to write?

16)   What happens in the writing workshop that turns Jason around? How is he able to communicate with Rebecca the last time they see each other?

17)   How does Jason use Bennu to show his own happy ending? Do you think Jason has also accepted himself?

18)   What makes a person who they are? Is it how they look, what they wear, how they act? Does Jason know that he is different from other children?

19)   Is Jason’s family able to accept him as he is? Does Rebecca accept him? Does that help Jason accept himself? Explain why or why not.

20)   Through Jason’s voice, we can experience the thoughts and perceptions of an autistic child. Do you think readers of this story will have a better understanding of autism? Support this position, using examples from the book that help explain autism.

1)     Many young people use writing as a way of sharing who they are: it helps them find a voice that they don’t have in talking with people. Try writing something that reveals something about yourself that you may find difficult to tell but that you can write about. The expression that Jason experiences from writing frees him from some of his limitations. What do you feel as you express yourself in your writing?

2)      Autism, or autistic spectrum disorder (ASD), is a complex and unique way of decoding the world. On the following website you can find out more about the disorder and how it affects people:

The signs or symptoms of autism can include:

Problems with communication—both verbal and
nonverbal.

Difficulties with sharing emotions, understanding how others think and feel, and holding a conversation.

Routines or repetitive behaviors—such as repeating words or actions, obsessively following routines or schedules, and playing in repetitive ways.

Nora Raleigh Baskin grew up in New York.  She has written several young adult novels including The Truth About My Bat Mitzvah and What Every Girl (Except Me) Knows. She also teaches writing and lives with her family in Connecticut.

Nora Raleigh Baskin is the ALA Schneider Family Book Award–winning author of Anything But Typical. She was chosen as a Publishers Weekly Flying Start for her novel What Every Girl (Except Me) Knows, and has since written a number of novels for middle graders and teens, including The Truth About My Bat Mitzvah, The Summer Before Boys, and Ruby on the Outside. Nora lives with her family in Connecticut. Visit her at NoraBaskin.com.