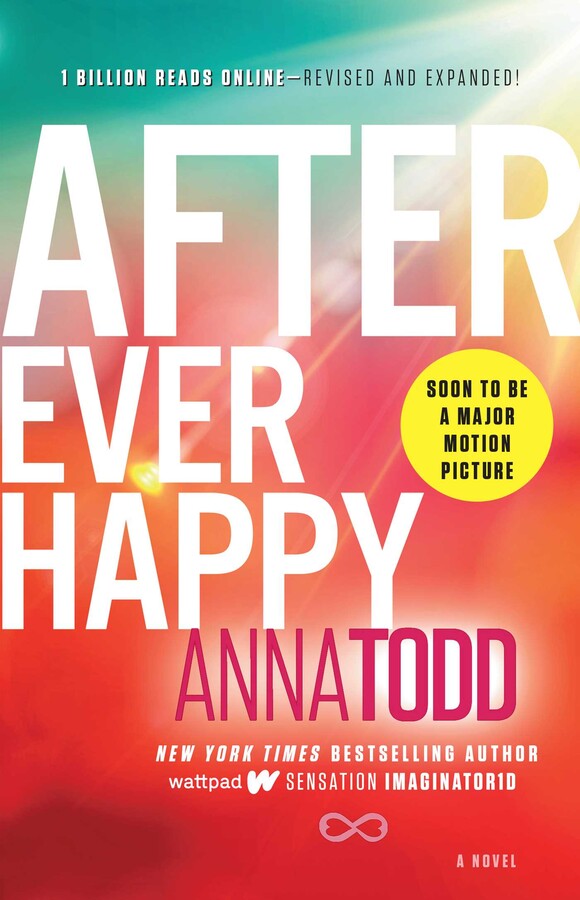 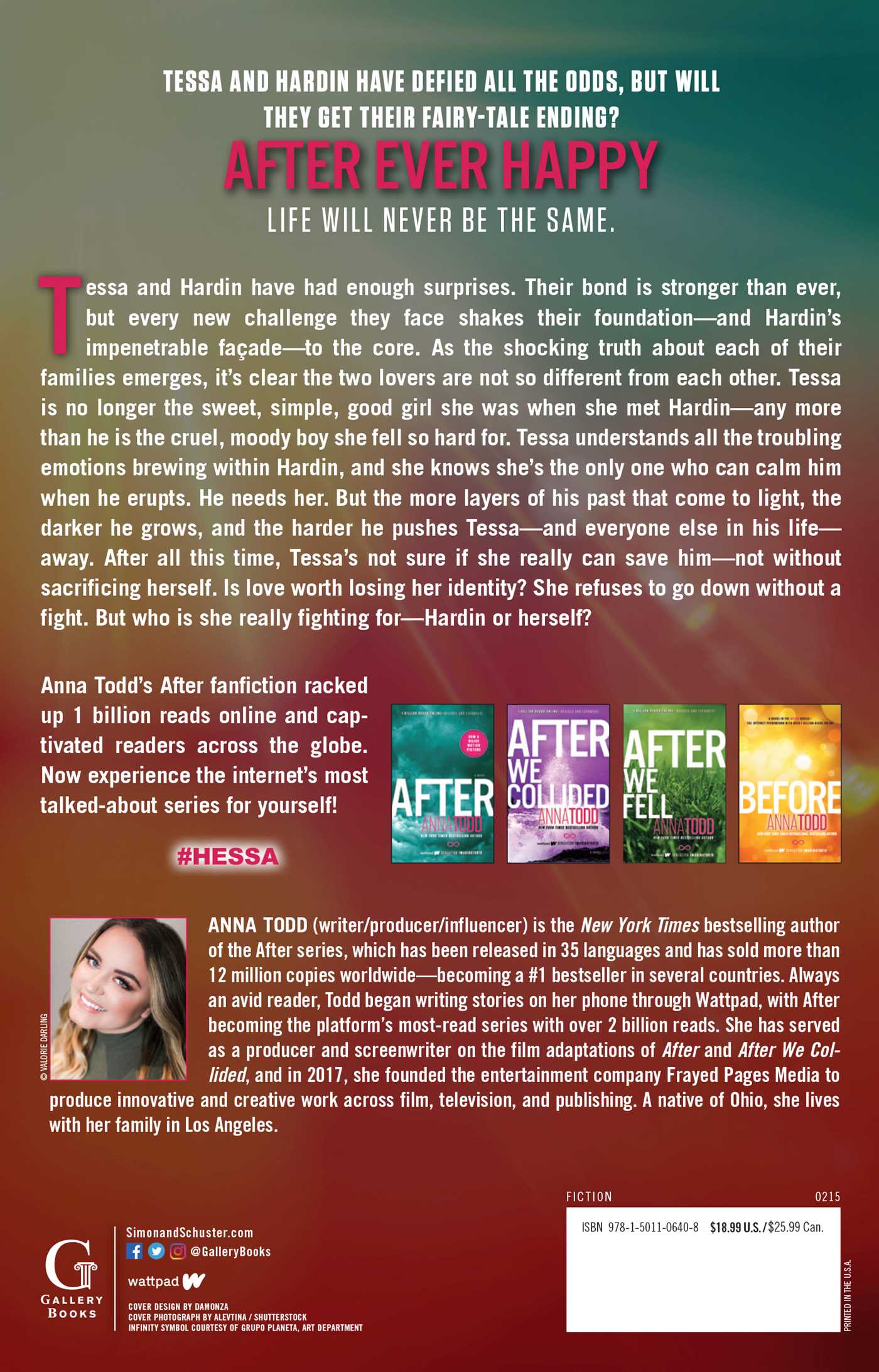 Book Four of the After series—the internet sensation with millions of readers.

Tessa didn’t plan on meeting H. during her freshman year of college. But now that she has, her life will never be the same. Book 4 of the After series—newly revised and expanded, Anna Todd's After fanfiction racked up 1 billion reads online and captivated readers across the globe. RELIST. Available April

I stand but quickly sit back down on the bench when the grass underneath me seems to sway unsteadily. The park is filling with people now. Families with small children, balloons and presents in their arms despite the cold weather.

“But Ken… Hardin looks just like him.” I remember the first time I met Ken Scott, inside a yogurt shop. I immediately knew he was Hardin’s father; his dark hair and his height brought me to the easy conclusion.

“Does he? I don’t really see it, except the hair color. Hardin has the same eyes as Christian, the same facial structure.”

Does he? I struggle to picture the three faces. Christian has dimples like Hardin and the same eyes… but it just doesn’t make sense: Ken Scott is Hardin’s father—he has to be. Christian looks so young compared to Ken. I know they’re the same age, but Ken’s alcoholism took its toll on his appearance. He’s still a handsome man, but you can see where the liquor has aged him.

“This is…” I struggle for words and air.

Kimberly looks at me apologetically. “I know. I’ve wanted to tell you so bad. I hated keeping this from you, but it wasn’t my place.” She puts her hand on mine and squeezes gently. “Christian assured me that as soon as Trish gave him permission, he would tell Hardin.”

“I just…” I take a deep breath. “That’s what Christian is doing? Telling Hardin now?” I stand up again and Kimberly’s hand drops away. “I have to go to him. He is going to—” I can’t even begin to fathom how Hardin will react to the news, especially after finding Trish and Christian together last night. This will be too much for him.

“He is.” Kim sighs. “Trish hasn’t agreed fully, but Christian said she was close enough and things were getting out of hand.”

As I pull out my phone, my only thought is that I can’t believe Trish would hide this from Hardin. I had thought more of her, much more as a mother, and now I feel as if I’ve never met the woman.

My phone is already pressed to my cheek, Hardin’s line ringing in my ear, when Kimberly says, “I told Christian that he shouldn’t separate you two when he told Hardin, but Trish recommended that if he does it, he needed to do it alone…” Kimberly’s mouth presses into a hard line, and she looks around the park, then up at the sky.

I reach the dull tone of the automated system on Hardin’s voicemail. I dial again while Kimberly sits silently, only to get his voicemail for the second time. I shove my phone into my back pocket and start wringing my hands. “Can you take me to him, Kimberly? Please?”

“Yes. Of course.” She jumps to her feet, calling for Smith.

Watching the little kid walk toward us with what I can only call a cartoon butler’s stride, it occurs to me that Smith is Christian’s son… and Hardin’s brother. Hardin has a little brother. And then I think about Landon… what does it mean for Landon and Hardin? Will Hardin want anything to do with him now that he doesn’t have a real family tie to him? And Karen, what about sweet Karen and her baked goods? Ken—what about the man who tries so hard to make up for the terrible childhood of a boy who isn’t his son. Does Ken know? My head is spinning, and I need to see Hardin. I need to make sure that he knows I am here for him, and we will figure this out together. I can’t imagine how he feels right now; he must be so overwhelmed.

After a few beats of silence, Kimberly says, “We thought he did because of the way he is with Hardin, but he couldn’t possibly.”

I feel for Kimberly. She already had to deal with her fiancé’s infidelity, and now this. When Smith gets to us, he stops and gives us a mysterious look, as if knowing exactly what we’ve been talking about. That’s not possible, but the way he leaves ahead of us and goes to the car without saying a word, it does make me wonder. 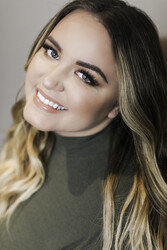 Anna Todd is the New York Times bestselling author of the After series. Always an avid reader, Todd began writing stories on her phone through Wattpad, the reading and writing multiplatform for original stories, with After becoming its most-read series with over two billion reads. She has been hailed by Cosmopolitan as “the biggest literary phenomenon of her generation.” The print edition of After was published in 2014 and has since been released in over thirty-five languages with more than twelve million copies sold worldwide. After is a #1 bestseller in countries across the globe including Italy, Germany, France, and Spain. Since the release of After, Todd has gone on to write eight additional novels and served as producer and screenwriter on the film adaptations of After and After We Collided. A native of Ohio, Anna, her husband, and son currently live in Seattle. Find her at AnnaTodd.com, on Twitter at @AnnaTodd, on Instagram at @AnnaTodd, and on Wattpad as Imaginator1D.

More books in this series: The After Series