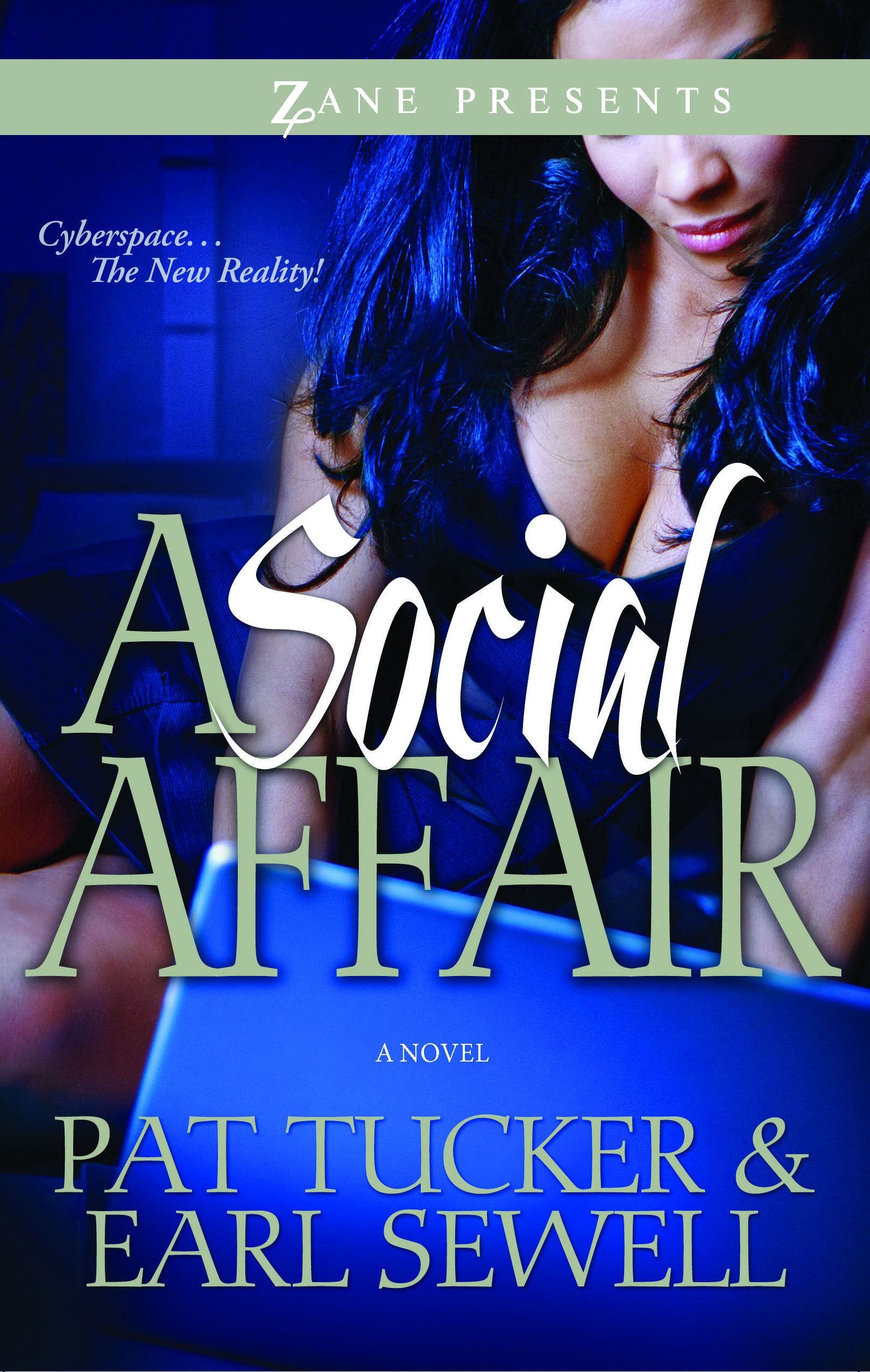 A cautionary tale about finding love online and the trouble that comes with cheating.

A cautionary tale about finding love online and the trouble that comes with cheating.

Bored with her humdrum married life, thirty-two-year-old Codi Norman is searching for excitement. After teaming up with her best friend, Katina, Codi discovers that the Internet offers both money and an escape from her earthly life. In cyberspace anything is possible, and that is what Codi loves most.

While online, she meets a charming and handsome man named Quinn Hamilton. Sparks fly and the two begin a torrid affair with unpredictable consequences. But their virtual lives collide with reality when their spouses discover their illicit relationship.

There. I said it and I didn’t give a rat’s ass who heard me. A part of me wished my husband, Larry Bernard Johnson, was here to hear, but he was at work. It was not him really. It was me. He was your typical husband, I guess. He worked, came home, and thought I should wait on him like a lowly slave instead of being his marital equal.

I could have bigger problems. He could be a male ho, he could be an alcoholic like his mama, he could beat me or skip out on us, but still, this married life was for the birds. And by that I meant, the dead birds. It was so damn boring! We did the same thing day in, day out, and it was wearing me out.

When I heard single women yearning for a husband, I wanted to tell them they could take mine! Seriously, what was there to want? Who wanted a controlling man constantly monitoring their every move, checking each red dime they spent, and judging their friends? Most times, I felt more like an inmate than a wife.

I stepped over Larry’s pile of dirty clothes, including his streaked boxers, and walked to the kitchen. It was like he believed I was his personal maid. Who would walk in, strip, and leave their clothes in the middle of the bedroom floor like they’d magically make it to the hamper on their own?

I rolled my eyes as I thought about his stinky, lazy, triflin’ behind.

Seven years ago when I was single, I was free. I wasn’t stressed out all the time. I could come and go whenever I pleased. I partied when I wanted and didn’t have to worry about checking in with anyone!

Back in the day, after being out all night, I could sleep until midafternoon the next day and it wouldn’t be anybody’s business but mine. I might not have had the latest designer clothes, but I always dressed well. I kept my hair and nails looking nice at all times. Now, I couldn’t remember what the inside of a beauty salon looked like.

All those damn studies that claimed married life was better were lying! They said your combined incomes meant less financial stress, monogamous sex combined with love was safer and more enjoyable, and your overall life expectancy was supposed to be longer. I said bullshit! Bullshit! Bullshit!

I’ve sat here at home and flipped through the channels, bored out of my mind. The problem with being unemployed was you were stuck at home watching TV while everyone else was at work. Working friends didn’t have time to sit up on the phone with you, or check out the newest posts on Facebook.

In all honesty, I wished I could be more like my girl, Katina. Unlike our other girlfriends, she didn’t work, but she didn’t care. Katina always had nice things, tons of money, and she kept her man under control instead of the other way around. Well, when she had a man.

Larry couldn’t stand Katina. He said she was trouble, but the more I looked at her, the more I liked what I saw. Take our situation, for instance. While he was sitting up hating on Katina, our household was in a constant state of chaos, so I didn’t see how he could complain about her and her household.

Our bills kept piling up, my unemployment was running out fast, and I was tired of robbing Peter to pay Paul. We were behind on everything—the mortgage, car notes, and the light bill. Oftentimes, I was so stressed and frustrated I didn’t even want him to touch me, much less give him some.

“Chile, you betta sex your husband anytime he wants it! You know what you won’t do, some other woman will!” That was my mama’s voice ringing in my ear. She worked my nerves, too.

The only reason I thought about her now was because of this Social Security commercial on TV. My mom was a widow who thought she could write the book on marriage.

I rolled my eyes as I thought about her unwanted tips she offered every chance she got. That’s why I started avoiding her calls. Who wanted to hear all that foolishness? This was not back in her day, times were different now, and I wasn’t trying to be submissive to no man. I didn’t care how many rings I had on my finger!

I had other issues to think about, like being unemployed.

I had survived three rounds of layoffs at Davis-Pinch, a company that manufactured, sold, and serviced equipment for the offshore oil and gas industry. But they got me in that fourth round.

I was an executive administrative assistant at DP. I swear I wished that moratorium on offshore drilling had never happened. I would’ve never lost my job in the first doggone place. But it did, and I did, and because of that things were tight and our situation kept getting worse.

The phone rang, but I ignored it. Thoughts of my mother and my lack of a job always left me feeling some kind of way. My sour mood didn’t change until I saw Katina’s number pop up on the caller ID. I tossed the remote to the side and picked up my cell phone. I was always glad to hear from Katina.

“Hey, gurrrl,” I sang back. That was our customary greeting.

Talking to her always made me feel good no matter what. She lived a life I only dreamed about. She. Was. Single.

“Why you sounding so broken down?” Katina asked.

“Yeah, I feel you on that. Things are kind of tight over here, too, but that’s okay ’cause I’m about to supersize my side hustle,” Katina sang. I could see her doing that played-out cabbage patch dance she did when she thought she had a bomb-ass idea.

I didn’t want to ask what she meant by that because in order to have a side hustle, you first needed a job. And since Katina didn’t work I couldn’t see a side hustle, but who was I to talk? At the moment, unemployment was sustaining me.

My interest was instantly piqued. When Katina had a plan, that plan usually translated into money. She wasn’t selfish, so usually if I wanted in, she was willing to share.

Katina Dawson was a free spirit who lived life to the very fullest, but you had to get to know her to really like her. She found something to celebrate every day and that was what I liked most about her. She spent a little too much time on the Internet in chat rooms for my taste, but I didn’t judge.

You could say I lived my life vicariously through her to a certain extent. When she met a new man online or had a blind date, we walked through the process step by step like we were preparing for battle. Katina and I got along really well because she was always quick on her feet and always offered an angle I hadn’t considered. We complemented each other.

Sometimes when things got too rough around here, I’d think, Now what would Katina do?

“No, girl. This is the type of proposal that requires face-to-face discussion ’cause I’ma have to explain a few things,” she said.

I wanted to laugh, but I knew Katina well enough to realize she was dead serious about whatever plan she’d come up with this time.

“Well, you know the baby is sick.” I was talking about my three-year-old son, Taylor, who couldn’t go to daycare because of a fever. “So I had to keep him home today. I can’t come meet you anywhere.”

“Don’t trip. I can come to you. When do you want me to come through?”

“Let’s see . . . ” I was stalling as I tried to determine how long it would take for me to get the house company ready.

Katina was like family, but because I stayed home all day, I didn’t need her thinking I was nasty and lazy. The reason I didn’t clean as diligently as I should was because I was always trying to teach Larry’s lazy, ungrateful, chauvinistic ass a lesson!

Uuggh! He made me so sick.

“Uumm, it’s ten now. How about around one? That way I have time to feed Taylor and get him settled back down again.”

“Okay. I’ll be there sometime around one,” Katina said.

“Codi!” she yelled as I was about to hang up.

“Just promise me you’ll have an open mind.”

That really made me curious. An open mind?

She laughed and I hung up. Great! Now I was gonna drive myself crazy for hours, wondering why I needed to have an open mind about Katina’s next side hustle, and what in the world it possibly meant for me.

By day, Pat Tucker works as a radio news director in Houston, Texas. By night, she is a talented writer with a knack for telling page-turning stories. She is the author of Somebody Has to Pay, The Cocktail Club, Sideline Scandals, Party Girl, Daddy’s Maybe, Football Widows (soon to be a movie), Daddy by Default, and Lachez (an original e-short). She is the coauthor with Earl Sewell of Loyalty Among Friends and A Social Affair and has participated in three anthologies, including New York Times bestselling author Zane’s Caramel Flava. A graduate of San Jose State University, Pat is a member of the National and Houston Association of Black Journalists and Sigma Gamma Rho Sorority, Inc. She is married with two children.

Earl Sewell attended Columbia College in Chicago where he studied screen and fiction writing. Earl’s YA novels in his Keysha and Friends series have made him a librarian and teen fan favorite. He currently resides in South Holland, Illinois.