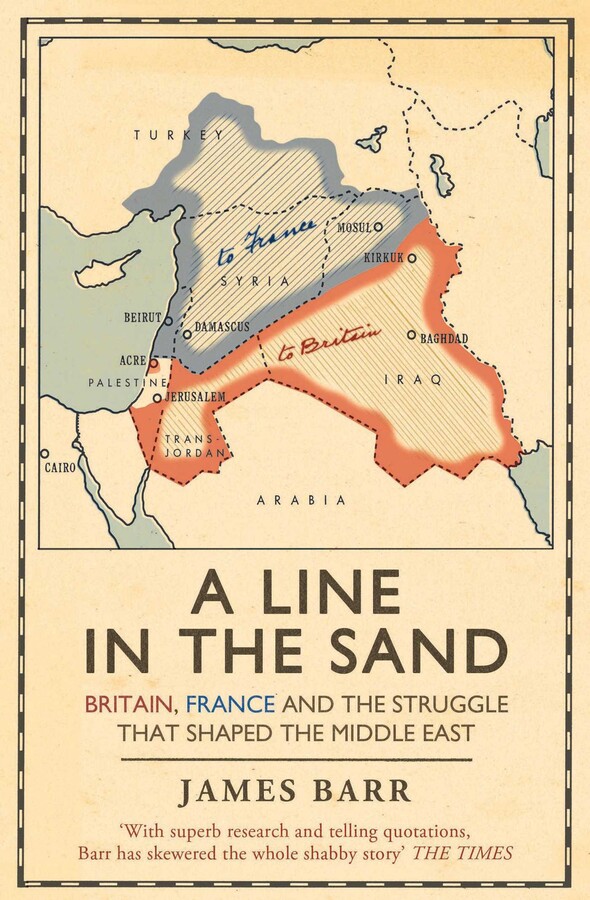 Britain, France and the struggle that shaped the Middle East

A fascinating insight into the untold story of how British-French rivalry drew the battle-lines of the modern Middle East.

In 1916, in the middle of the First World War, two men secretly agreed to divide the Middle East between them.

Sir Mark Sykes was a visionary politician; François Georges-Picot a diplomat with a grudge. They drew a line in the sand from the Mediterranean to the Persian frontier, and together remade the map of the Middle East, with Britain’s 'mandates' of Palestine, Transjordan and Iraq, and France's in Lebanon and Syria.

Over the next thirty years a sordid tale of violence and clandestine political manoeuvring unfolded, told here through a stellar cast of politicians, diplomats, spies and soldiers, including T. E. Lawrence, Winston Churchill and Charles de Gaulle.

Using declassified papers from the British and French archives, James Barr vividly depicts the covert, deadly war of intrigue and espionage between Britain and France to rule the Middle East, and reveals the shocking way in which the French finally got their revenge.

'With superb research and telling quotations, Barr has skewered the whole shabby story...The convulsion of that fateful line in the sand are still being felt today - not only in the Middle East, but throughout the world'

'Racy... [Barr] is right to assert that few British readers grasp the ferocity of Anglo-French antagonism in the Levant'

'Lively and entertaining. He has scoured the diplomatic archives and has come up with a rich hail that brings his narrative to life'

'James Barr's history of imperial machinations in the Middle East offers a revelatory slant on the continuing crisis in that area... an outstanding piece of research and a damning take on what stoked current Middle Eastern woes'

'James Barr has succeeded better than any author before him in telling the fascinating story of Anglo-French rivalries in the modern Middle East... Outstanding'

– Eugene Rogan, author of 'The Arabs: A History

'The book resembles a gripping spy thriller...an expertly researched and authoritative book that is easy to read'

The struggle between Britain and France for mastery of the Middle East between 1914 and the late 1940s, is analysed by James Barr in his excellent new book. It is a complex story of intrigue and skulduggery, which Barr pieces together in a deft, well-written narrative. A journalist by profession, he manages to bring the whole subject alive through a series of well-chosen details and characters'

'History at its meticulously researched and addictive best'

Britain, France and the struggle that shaped the Middle East