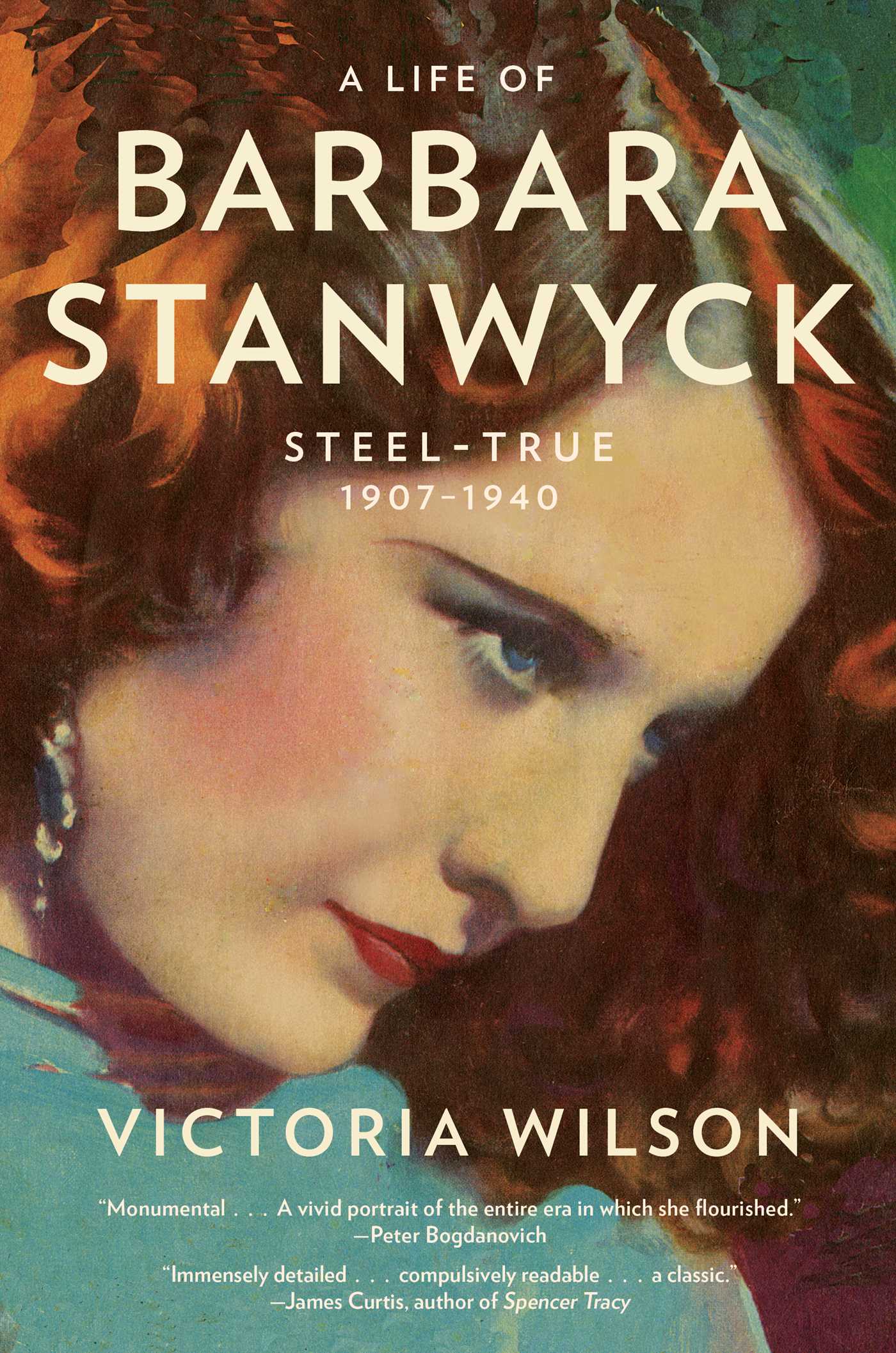 Victoria Wilson: What Are You Reading?

A Life of Barbara Stanwyck

“860 glittering pages” (Janet Maslin, The New York Times): The first volume of the full-scale astonishing life of one of our greatest screen actresses—her work, her world, her Hollywood through an American century.

Frank Capra called her, “The greatest emotional actress the screen has yet known.” Now Victoria Wilson gives us the first volume of the rich, complex life of Barbara Stanwyck, an actress whose career in pictures spanned four decades beginning with the coming of sound (eighty-eight motion pictures) and lasted in television from its infancy in the 1950s through the 1980s. Here is Stanwyck, revealed as the quintessential Brooklyn girl whose family was in fact of old New England stock; her years in New York as a dancer and Broadway star; her fraught marriage to Frank Fay, Broadway genius; the adoption of a son, embattled from the outset; her partnership with Zeppo Marx (the “unfunny Marx brother”) who altered the course of Stanwyck’s movie career and with her created one of the finest horse breeding farms in the west; and her fairytale romance and marriage to the younger Robert Taylor, America’s most sought-after male star.

Here is the shaping of her career through 1940 with many of Hollywood's most important directors, among them Frank Capra, “Wild Bill” William Wellman, George Stevens, John Ford, King Vidor, Cecil B. Demille, Preston Sturges, set against the times—the Depression, the New Deal, the rise of the unions, the advent of World War II, and a fast-changing, coming-of-age motion picture industry.

And at the heart of the book, Stanwyck herself—her strengths, her fears, her frailties, losses, and desires—how she made use of the darkness in her soul, transforming herself from shunned outsider into one of Hollywood’s most revered screen actresses.

Fifteen years in the making—and written with full access to Stanwyck’s family, friends, colleagues and never-before-seen letters, journals, and photographs. Wilson’s one-of-a-kind biography—“large, thrilling, and sensitive” (Michael Lindsay-Hogg, Town & Country)—is an “epic Hollywood narrative” (USA TODAY), “so readable, and as direct as its subject” (The New York Times). With 274 photographs, many published for the first time.

Victoria Wilson is a vice president and senior editor at Alfred Knopf, and the author of A Life of Barbara Stanwyck. She grew up on Martha’s Vineyard and lives in New York City and upstate New York.

"Monumental... A vivid portrait of the entire era in which she flourished."

“Barbara Stanwyck was one of the very great loves of my life and Victoria Wilson's book told me so much more than Barbara herself could tell anybody. She has captured her loyalty--her professionalism--her anger and her undeniable will to stay in the game of life and, perhaps most importantly--her loneliness. Victoria has been ‘steel true’ to her.”

"If ever there was an actress who was ready for prime time, it is Stanwyck, and this enormously informative tribute – juicy, yet dignified, admiring yet detached – is the book to bring her to center stage."

“You’ll love this book. The story is full of flavor with details that create a kind of chiaroscuro painted deftly with a soft brush, of our life at that time... Wilson’s scholarliness on the subject of the life of a movie actress, a movie star whose career ran (she worked) for six decades, is awesome... If you are a movie fan, a filmmaking fan, a fan of Hollywood history, a filmmaker, or would be, should be, could be, or even just a person who is completely a TCM addict, this book you should be reading... I finished reading much to my disappointment (wanting more) after 860 pages.”

"I was blown away, absorbed, riveted. What great smooth style, what brilliance, what depth. This is huge and wonderful and rich. What an achievement!"

“This biography, when completed, will be the last word on Stanwyck.”

“Immensely detailed, authoritative, compulsively readable... It will come to be considered a classic.”

“One hopes that the wait for Ms. Wilson’s second volume won’t be as long as World War II, since ‘Steel-True’ is so readable, and as direct as its subject. I couldn’t put it down. . .”

“I am loving your Barbara Stanwyck--you bring that whole period of time so brilliantly to life. I am already in love with her and so so angry at Frank Fay! Thank you for this wonderful, delicious book!"

“Monumental in every sense...sweeping and authoritative...written with verve and with great empathy and relish for her subject. The author is also shrewd about the actress’s complexity and human limitations... she is smart about the films and about the history and business of Hollywood in the Golden Age. Not the least of her achievement is leaving the reader eager to read volume two.”

– Foster Hirsch, author of The Dark Side of the Cinema; A Method to Their Madness

“A fabulous and expansive examination of the life of an iconic American actress.”

“Steel-True courts the definitive…The voice of Steel-True is passive, reportorial, almost choral. Applied to Wilson’s landmark recovery and synthesis of 1920s and ’30s Broadway and Hollywood history, it works beautifully…Wilson is a bold and determined architect, and ultimately succeeds in tracing, via some of Hollywood’s most brilliant minds and celebrated careers, the evolution of both an industry and an art form during one of its most hallowed and productive periods.”

“Wilson’s book is indeed a monument of research. . . . A Life of Barbara Stanwyck will unquestionably remain the biography of record; beyond Wilson’s excavation of so much that would otherwise have been lost, her book has a deep sensitivity to the seriousness and subtlety of Stanwyck’s craft. This is the biography not of a Hollywood phenomenon but of a serious artist.”

“What you have done is extraordinary. It is an amazing book, brilliantly written, enhancing the whole life, Barbara’s life, happenings around her—people of the industry, people in the theater and in politics. The way you have shown her life to include other situations, all that you interject . . . it makes her life, to me, more historically important. You have brought her wonderful career magnificently to life, and as her friend, I thank you.”

A Life of Barbara Stanwyck