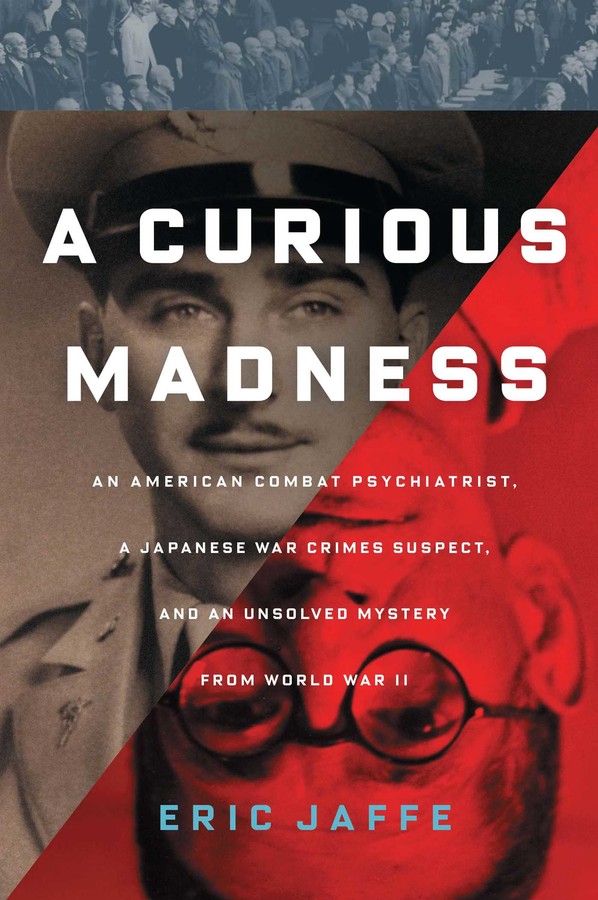 From an “illuminating and entertaining” (The New York Times) young writer, the story that explores the fateful intersection of two men at the Tokyo war crimes trial that followed World War II: a Japanese nationalist charged with war crimes and the American doctor assigned to determine his sanity—and thus his fate.

In the wake of World War II, the Allied forces charged twenty-eight Japanese men with crimes against humanity. Correspondents at the Tokyo trial thought the evidence fell most heavily on ten of the accused. In December 1948, five of these defendants were hanged while four received sentences of life in prison. The tenth was a brilliant philosopher-patriot named Okawa Shumei. His story proved strangest of all.

Among all the political and military leaders on trial, Okawa was the lone civilian. In the years leading up to World War II, he had outlined a divine mission for Japan to lead Asia against the West, prophesized a great clash with the United States, planned coups d’etat with military rebels, and financed the assassination of Japan’s prime minister. Beyond “all vestiges of doubt,” concluded a classified American intelligence report, “Okawa moved in the best circles of nationalist intrigue.”

Okawa’s guilt as a conspirator appeared straightforward. But on the first day of the Tokyo trial, he made headlines around the world by slapping star defendant and wartime prime minister Tojo Hideki on the head. Had Okawa lost his sanity? Or was he faking madness to avoid a grim punishment? A U.S. Army psychiatrist stationed in occupied Japan, Major Daniel Jaffe—the author’s grandfather—was assigned to determine Okawa’s ability to stand trial, and thus his fate.

Jaffe was no stranger to madness. He had seen it his whole life: in his mother, as a boy in Brooklyn; in soldiers, on the battlefields of Europe. Now his seasoned eye faced the ultimate test. If Jaffe deemed Okawa sane, the war crimes suspect might be hanged. But if Jaffe found Okawa insane, the philosopher patriot might escape justice for his role in promoting Japan’s wartime aggression.

Meticulously researched, A Curious Madness is both expansive in scope and vivid in detail. As the story pushes both Jaffe and Okawa toward their postwar confrontation, it explores such diverse topics as the roots of belligerent Japanese nationalism, the development of combat psychiatry during World War II, and the complex nature of postwar justice. Eric Jaffe is at his best in this suspenseful and engrossing historical narrative of the fateful intertwining of two men on different sides of the war and the world and the question of insanity.

Eric Jaffe is the author of The King’s Best Highway: The Lost History of the Boston Post Road, the Route That Made America, which won the U.S. Postal Service’s 2012 Moroney Award for Scholarship in Postal History. He’s a former web editor of Smithsonian magazine and now writes for The Atlantic Cities, a site devoted to urban life run by The Atlantic magazine.

“Absorbing… In the hands of a lesser writer, this construct wouldn’t work, but Mr. Jaffe pulls it off with skill and intelligence. Fascinating… a mini-history of the treatment of the mentally ill in the first half of the 20th century along with public attitudes toward mental illness.”

“A richly layered exploration of the thin line between wellness and madness and the extent to which our understanding of those states is sometimes a matter of perception. A Curious Madness is much more than a narrow portrait of its protagonists. It is also a wider study of their cultures and the collective spirits of their countries before and during World War II.”

"Over 250 fascinated pages, A Curious Madness performs a valuable service for history buffs by figuratively exhuming Okawa from obscurity... For readers who believe the 20th century has been squeezed dry of its secrets, this book is a revelation.”

"Eric Jaffe has given us an extraordinary book, at once intimate (a wrenching tale of family madness) and epic (two nations gathering themselves to fight a devastating war). While never slowing his narrative velocity, the author finds in the convergence of two very different lives an encapsulation of immense issues: When does patriotism become criminal? What does combat do to the human spirit? Can a victorious nation ever mete out just punishment to a vanquished enemy? Here is a work of the greatest significance that is as engrossing as a first-rate detective story—which, in a way, it is as well."

– Richard Snow, author of A Measureless Peril: America in the Fight for the Atlantic, the Longest Battle of WWII

"In Tokyo, just after World War Two, Eric Jaffe's grandfather played a small but remarkable role in what is sometimes remembered as Japan's Nuremberg Trials. In A Curious Madness, Jaffe tells the story. The book is a brave, meticulously researched and beautifully balanced account of an episode that by its very nature must always remain unaccountable."

– Jonathan Weiner, The Beak of the Finch: A Story of Evolution in Our Time, 1995 Pulitzer Prize

“Jaffe’s well-researched, engaging story touches on subjects as diverse as the roots of Okawa’s conservative nationalism and the U.S. Army’s theories and treatments for combat fatigue, but most importantly, it reveals the strange ways war can bring diverse lives together for a brief moment to change not only those individuals, but history.”

"Travelling effortlessly between times and places, Eric Jaffe recounts the uneasy meeting of two curious minds. The story of the eccentric Japanese philosopher Okawa Shumei, a suspected war criminal and ideological mastermind behind Japan’s war mobilization in World War II, and Daniel Jaffe, a young American combat psychiatrist and the author’s grandfather who judged Okawa too mad to stand trial, provides a series of illumining, thoughtful, and at times funny insights on how we ourselves deal with our own minds and imaginations. A CURIOUS MADNESS is a powerful proof that true life is stranger, indeed more curious, than fiction."