Justine Ezarik (a.k.a. iJustine) is a gadget and technology expert, actress, host of AOL’s HardWired, and one of the most subscribed-to personalities on YouTube. She has partnered with an array of corporate clients, including Microsoft, Intel, Mattel, Nikon, Ford, GE, Lionsgate, and Samsung. Recently, she starred in the “District Voices” web series, promoting the release of The Hunger Games: Mockingjay Part I, and an international campaign for Call of Duty: Black Ops 2, directed by Guy Ritchie. Justine has been nominated for two Teen Choice awards, four Streamy Awards, and is the winner of the People’s Voice Webby Award for Best Web Personality/Host. She has been named one of The Hollywood Reporter’s 50 Most Powerful Digital Players, was called the “most influential person online” by Fast Company, and ranked No. 6 on The Daily Beast’s 2012 Digital Power Index (one of only nine women, including Sheryl Sandberg and Arianna Huffington, to make the list). Justine has also appeared on shows such as The Talk, FOX’s Studio 11, The Rachael Ray Show, The Vampire Diaries, Criminal Minds, Law & Order, E!, MTV, Entertainment Tonight, The Insider, and was co-host of NBC’s reality challenge show, Escape Routes. 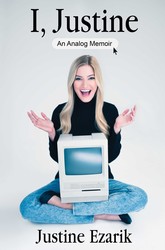