We’ve always been intrigued by the anxieties of everyday life. All of us with children know those times where a three year old shows you a drawing they’ve made and then explains ‘what it’s about’. We had the thought: what if it was a drawing of a murder?

In this story, Poppy, a three-year-old girl, comes back from a weekend with her father.  When her mother, Tess, sorts through her things, she finds a drawing Poppy has done which seems to show that she has witnessed a murder.

Tess now faces a series of painful problems.  Her three-year-old girl is a hopelessly unreliable witness. Apart from the drawing, there is no evidence that any crime has actually occurred: there is no apparent victim an no apparent murderer. How do you report a crime that doesn’t exist to the police?

But for us it’s always important that the crimes we write about are grounded in the reality of people’s lives. Apart from this ‘crime’, Tess is also having to deal with the damage of her own life. What she had thought was an idyllic relationship has been blown apart by betrayal. Gradually, through the course of the book, Tess discovers that her life wasn’t what she thought it was. She has been surrounded by lies and deceptions. But are they connected to the murder - if there is a murder?

What appealed to us about the idea is that the most frightening things most of us face is not the outside threats of criminals and psychopaths but the deceptions of our friends and the people we love. In a way, all of us are detectives in our own lives: what do our friends really think about us? Can we trust even those we’re closest to? All of us have secrets. 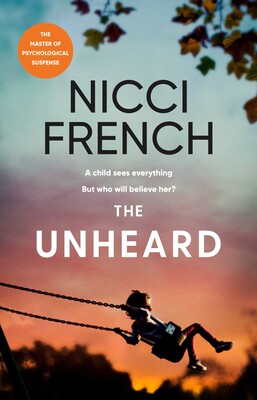 The Unheard
By Nicci French

THE NEW THRILLER FROM THE MASTER OF PSYCHOLOGICAL SUSPENSE