1. What did you think of the ultimate sacrifices both Eva and Precious made? Would you have lived a life the way they did?

2. Both Eva and Precious try to change their lives by moving to London—Eva also tries to change her name and her whole identity. Why do you think they chose to reinvent themselves? Was it the time period? Their station in life? Or their hope for their future?

3. Eva and Precious have to make very difficult decisions in the book—decisions that betray the dearest person to each of their hearts. Did you sympathise with them about the decisions they made? Or do you think they could have had made different choices?

4. Maddie has a hard time facing the truth. Do you think she addressed her dilemma in a way that others would have? What words of encouragement would you have given her?

5. What is it about war that causes us to reflect on the human condition? Especially World War II?

6. Why do you think Precious wanted the truth to finally be told? After all those years, why did she want the secret to no longer be one?

7. For most of her life Eva lived a lie. Who do you think Eva hurt most by living this lie? Or do you think she hurt anyone at all? Did she even hurt herself?

8. Maddie has to deal with the possibility of dying young from cancer like her mother and doesn’t want to have any serious relationships because of her fear. Do you agree with her choices?

9. The things that separated Eva from Graham were very hard to bridge, especially in England before World War II: money, social class, education, family background. Do you think their relationship would still have survived if Eva had told Graham the truth about her real identity?

10. Do you think Colin’s response to Maddie’s fears is adequate? Do you believe that he is sincere about his promises to her? 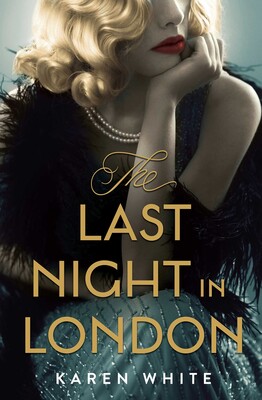 The Last Night In London
By Karen White

A captivating story of friendship, love and betrayal – and finding hope in the darkness of war. For fans of The Paris Seamstress and The Pearl Thief.

London, 1939. Beautiful and ambitious Eva Harlow and her American best friend, Precious Dubose, are trying to make their way as fashion models. When Eva falls in love with Graham St. John, an aristocrat and Royal Air Force pilot, she can’t believe her luck – she’s getting everything she ever wanted. Then the Blitz devastates her world, and Eva finds herself slipping into a web of intrigue, spies and secrets. As Eva struggles to protect everything she holds dear, all it takes is one unwary moment to change their lives forever.

London, 2019. American journalist Maddie Warner travels to London to interview Precious about her life in pre-WWII London. Maddie, healing from past trauma and careful to close herself off to others, finds herself drawn to both Precious and to Colin, Precious’ enigmatic surrogate nephew. As Maddie gets closer to her, she begins to unravel Precious’ haunting past – and the secrets she swore she’d never reveal …

'This book had everything I adore: interwoven storylines, a thrilling mystery, beautiful friendships and a little bit of love.' Natasha Lester, bestselling author of The Paris Secret

The Last Night in London author Karen White discusses her inspiration and challenges.