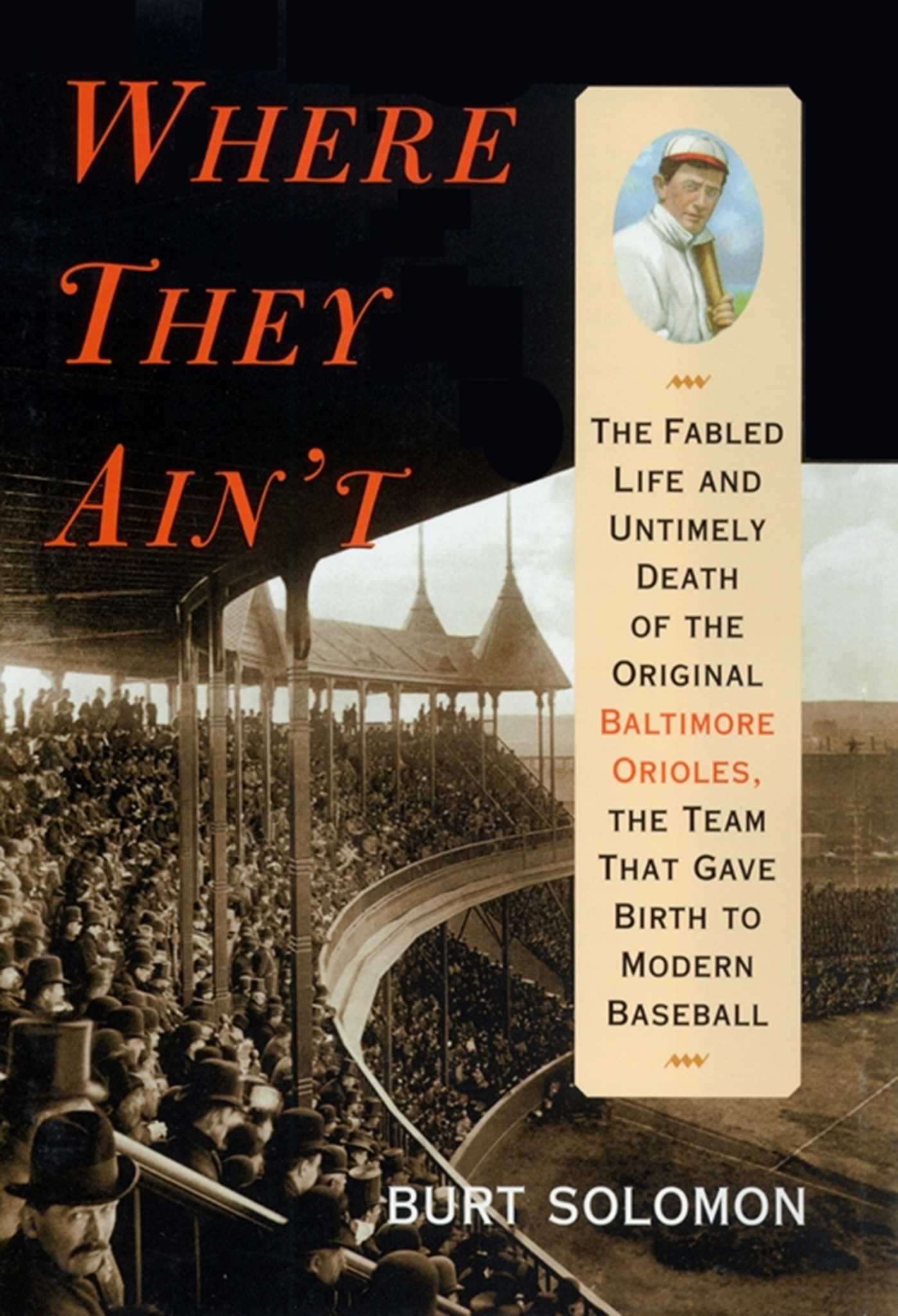 The Fabled Life and Ultimely Death of the Original Baltimore Orioles, the Team that Gave Birth to Modern Baseball

Greedy owners, spoiled players, disillusioned fans -- all hallmarks of baseball in the 'nineties. Only in this case, it's the 1890s. We may think that business interests dominate the sport today, but baseball's early years were an even harsher and less sentimental age, when teams were wrenched from their cities, owners colluded and the ballplayers held out, and the National League nearly turned itself into an out-and-out cartel. Where They Ain't tells the story of that tumultuous time, through the prism of the era's best team, the legendary Baltimore Orioles, and its best hitter, Wee Willie Keeler, whose motto "Keep your eye clear, and hit 'em where they ain't" was wise counsel for an underdog in a big man's world.
Under the tutelage of manager Ned Hanlon, the Orioles perfected a style of play known as "scientific baseball," featuring such innovations as the sacrifice bunt, the hit-and-run, the squeeze play, and the infamous Baltimore chop. The team won three straight pennants from 1894 to 1896 and played the game with snap and ginger. Burr Solomon introduces us to Keeler and his colorful teammates, the men who reinvented baseball -- the fierce third baseman John McGraw, the avuncular catcher Wilbert Robinson, the spunky shortstop Hughey Jennings, and the heartthrob outfielder Joe Kelley, who carried a comb and mirror in his hip pocket to groom himself between batters.
But championships and color were not enough for the barons of baseball, who began to consolidate team ownership for the sake of monopoly profits. In 1899, the Orioles' owners entered into a "syndicate" agreement with the ambitious men who ran the Brooklyn Trolley Dodgers -- with disastrous results. The Orioles were destroyed (and the franchise folded), the city of Baltimore was relegated to minor-league status just when the city's industries were being swallowed up by national monopolies, and even Willie Keeler, a joyful innocent who wanted only to play ball, ultimately sold out as well. In Solomon's hands, the story of the Orioles' demise is a page-turning tale of shifting alliances, broken promises, and backstage maneuvering by Tammany Hall and the Brooklyn and Baltimore political machines on a scale almost unimaginable today.
Out of this nefarious brew was born the American League, the World Series, and what we know as "modern baseball," but innocence was irretrievably lost. The fans of Baltimore, in fact, would have to wait more than half a century for the major leagues to return. Where They Ain't lays bare the all-too-human origins of our national game and offers a cautionary tale of the pastime at a century's end.

Peter Golenbock author of Bums: An Oral History of the Brooklyn Dodgers Not only does Burt Solomon bring to life the legends of old-time baseball, he does so while detailing how the team owners double-crossed each other, stole players, and squeezed salaries to the bone. I discovered that the business of baseball at the turn of the century was as vicious and complicated as it is today.

Doris Kearns Goodwin author of Wait Till Next Year Where They Ain't is a rousing good story, a rich tapestry of charming rogues, hustlers, and gritty ballparks that brings to sparkling life the game of baseball as it was played a century ago. With a novelist's feel for character and narrative, Burt Solomon renders a seamless tale that shows how baseball became the business-dominated pastime it is today. Solomon's portrait of Wee Willie Keeler is unforgettable, providing a steady anchor for his absorbing tale. From the wealth of wonderful anecdotes that Solomon has uncovered, I learned many, many things about Brooklyn and my beloved Dodgers that I had not known before. This is a marvelous book.

Nicholas Dawidoff author of The Catcher Was a Spy Burt Solomon has done rigorous and joyful research and succeeded in turning up all manner of oddities from baseball's attic, including the deftest place hitter there ever was, a beer-barrel-chested slugger, a brawling third baseman, a ginger shortstop with a law degree, an every-other-day potbellied twirler, and a full bleacher's quota of rotten-tomato-throwing cranks -- in other words he has rediscovered the original Baltimore Orioles, as lively, colorful, and skilled a baseball team as there ever was, no matter what the Yankees say.

Robert W. Creamer author of Babe: The Legend Comes to Life Anyone interested in baseball and baseball history will relish Burt Solomon's exploration into the world of baseball in the 1890s, the era of the legendary Old Orioles of Willie Keeler and John McGraw.

John Thorn author of Treasures of the Baseball Hall of Fame and editor of Total Baseball Where They Ain't is a wonderful peephole into the past, of Baltimore and Brooklyn, of baseball and urban life a century ago. Burt Solomon has given us the best book yet on a heretofore dimly understood epoch, the fierce, cut-throat, more-dismal-than-gay 1890s. For those who would understand our own strange decade of sport and business, Where They Ain't is where it's at.

The Fabled Life and Ultimely Death of the Original Baltimore Orioles, the Team that Gave Birth to Modern Baseball