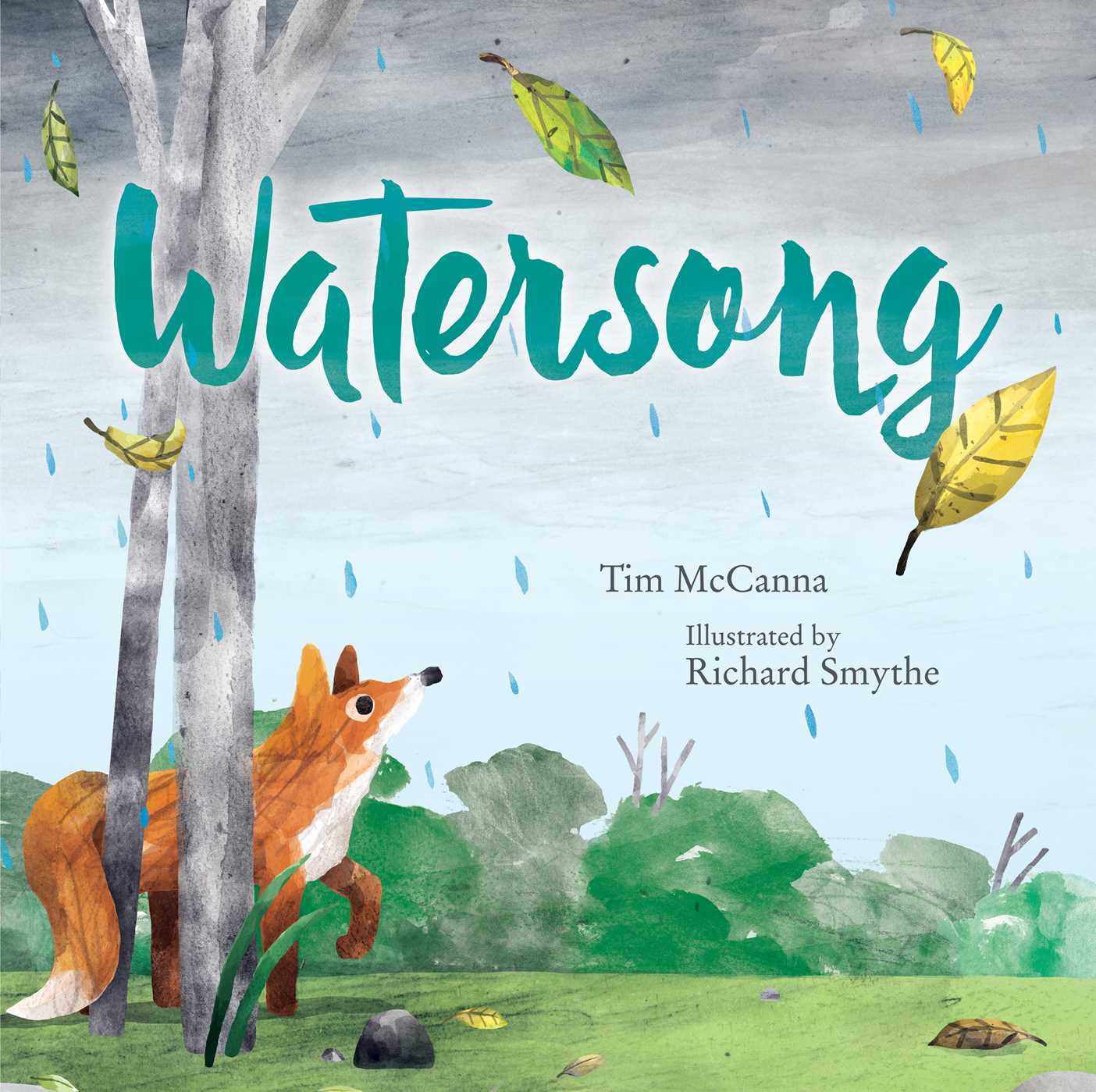 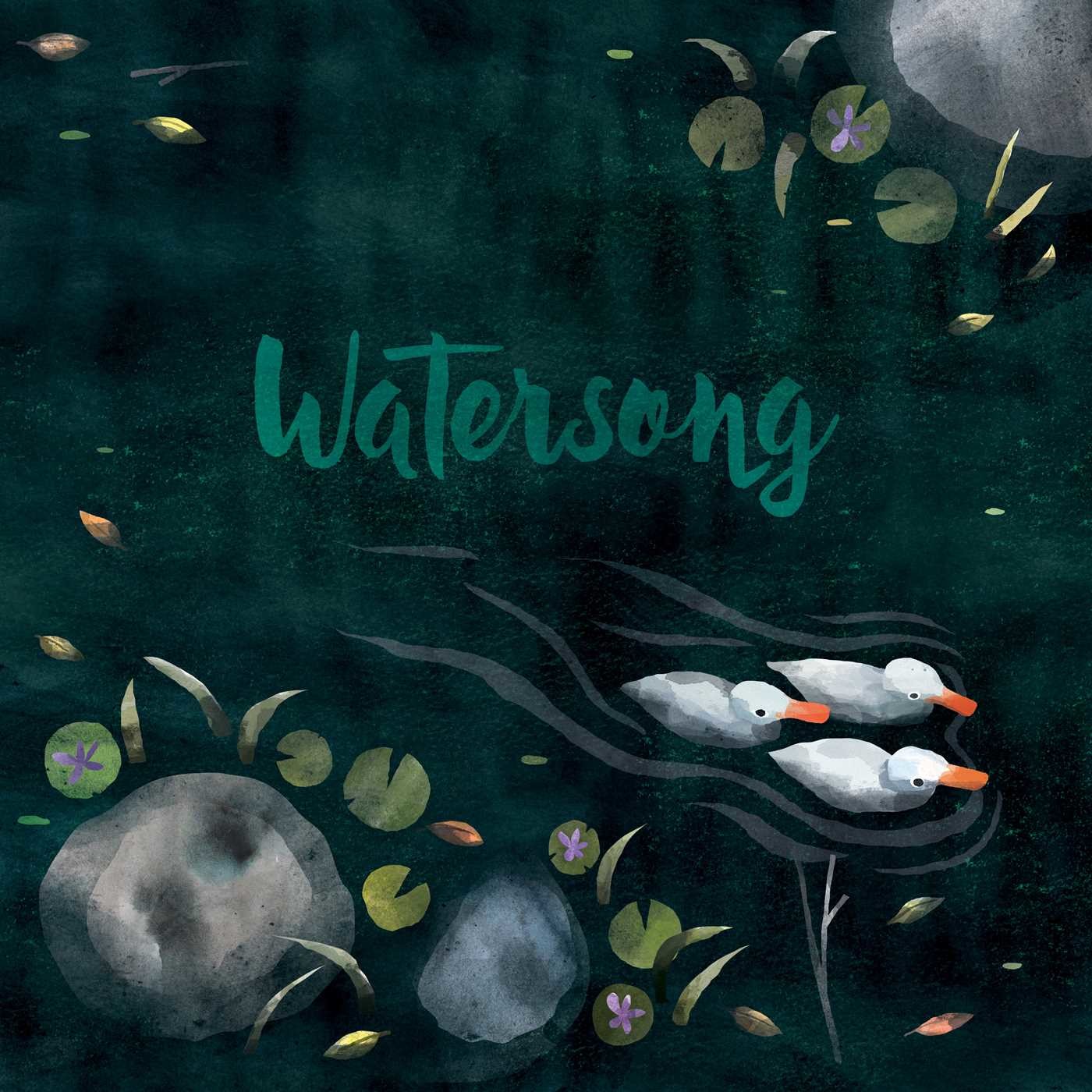 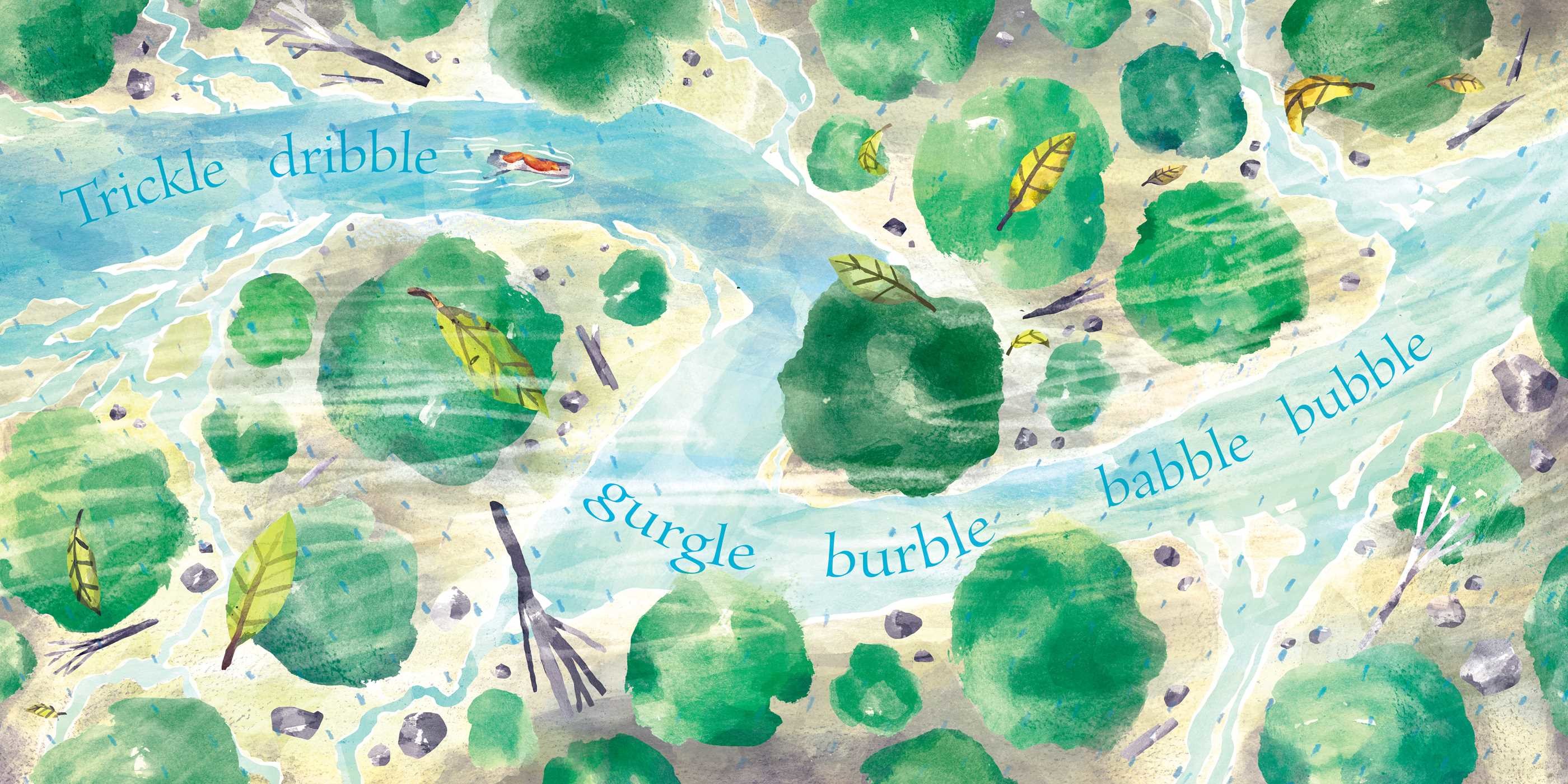 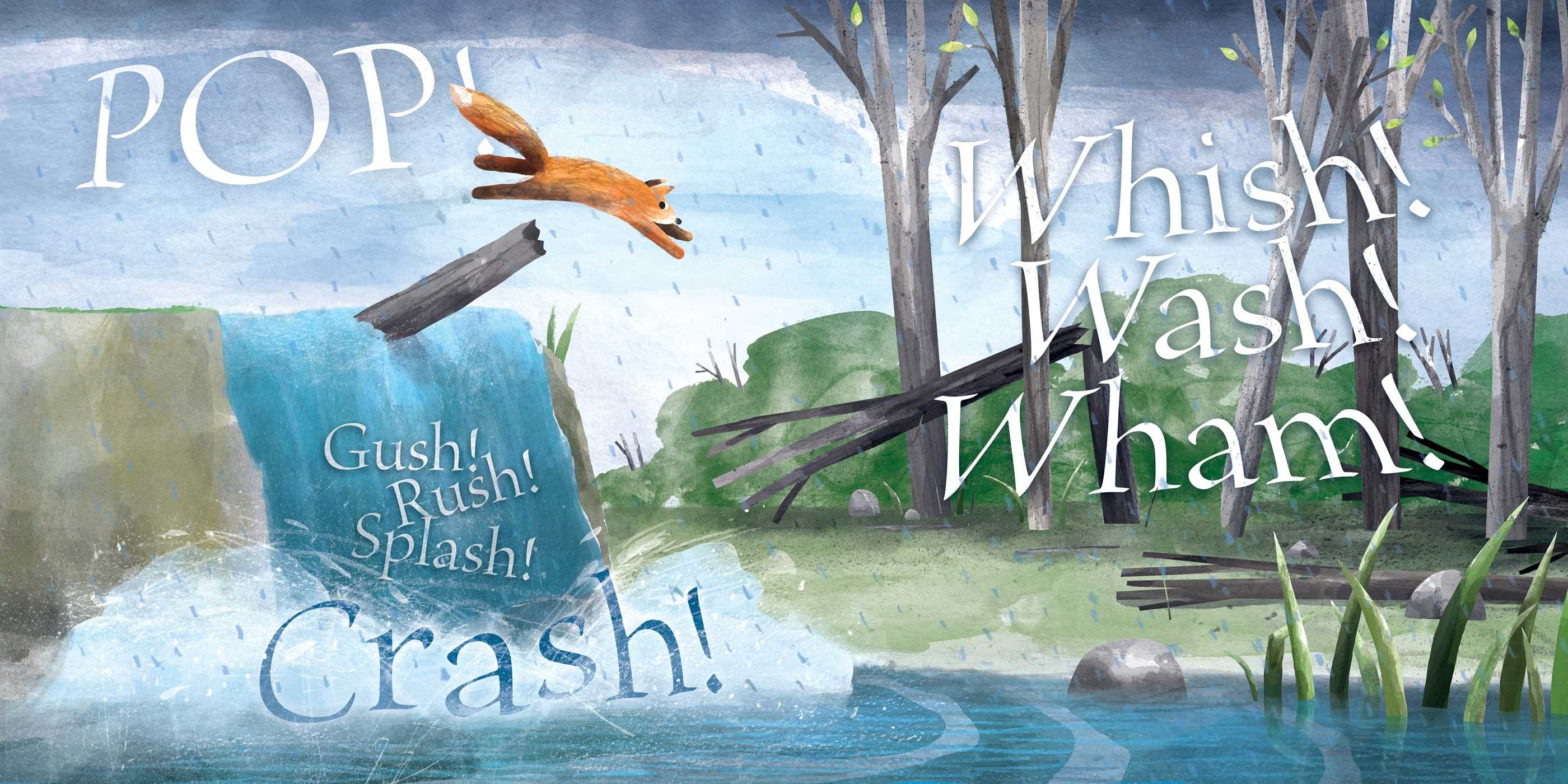 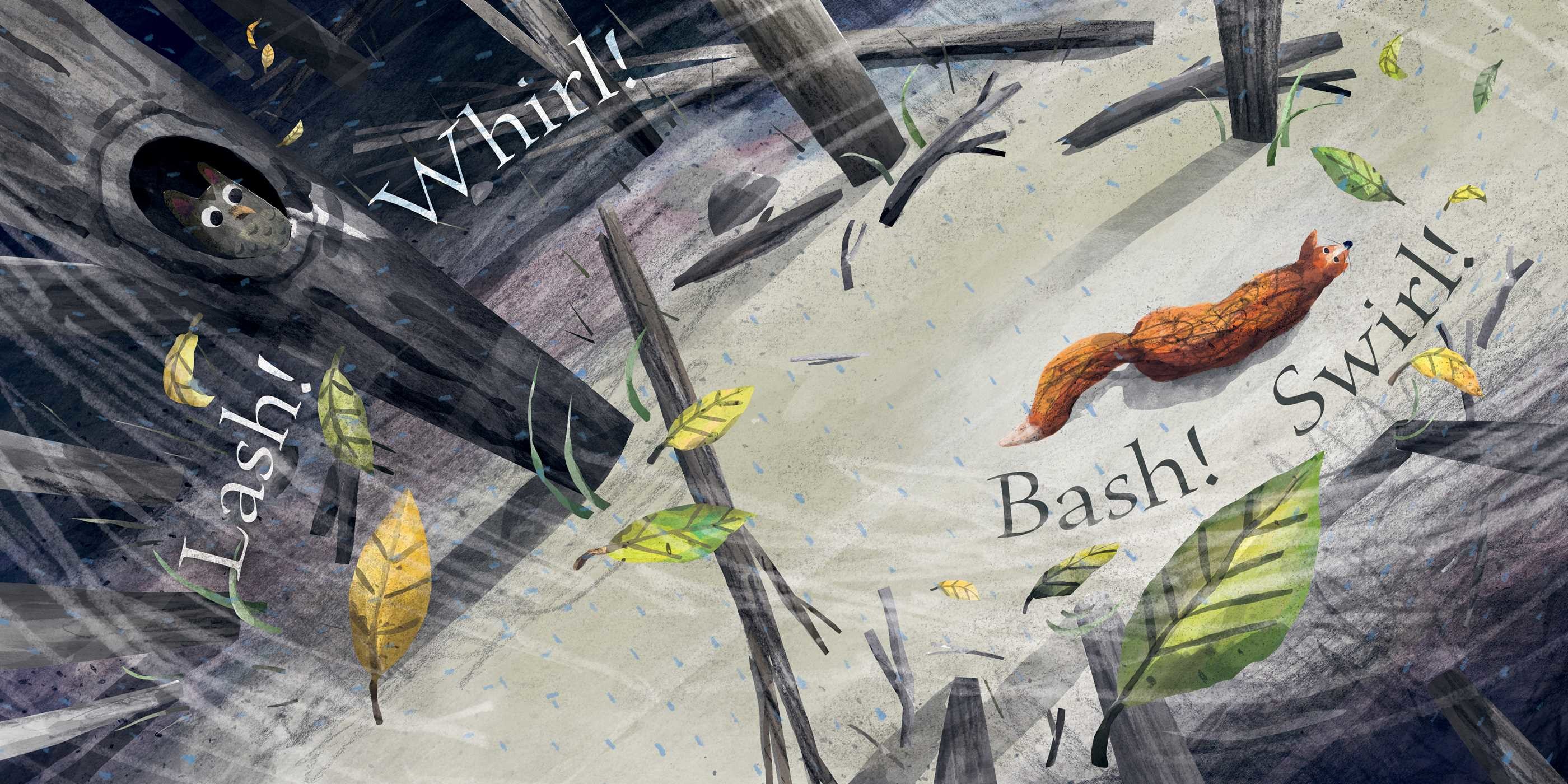 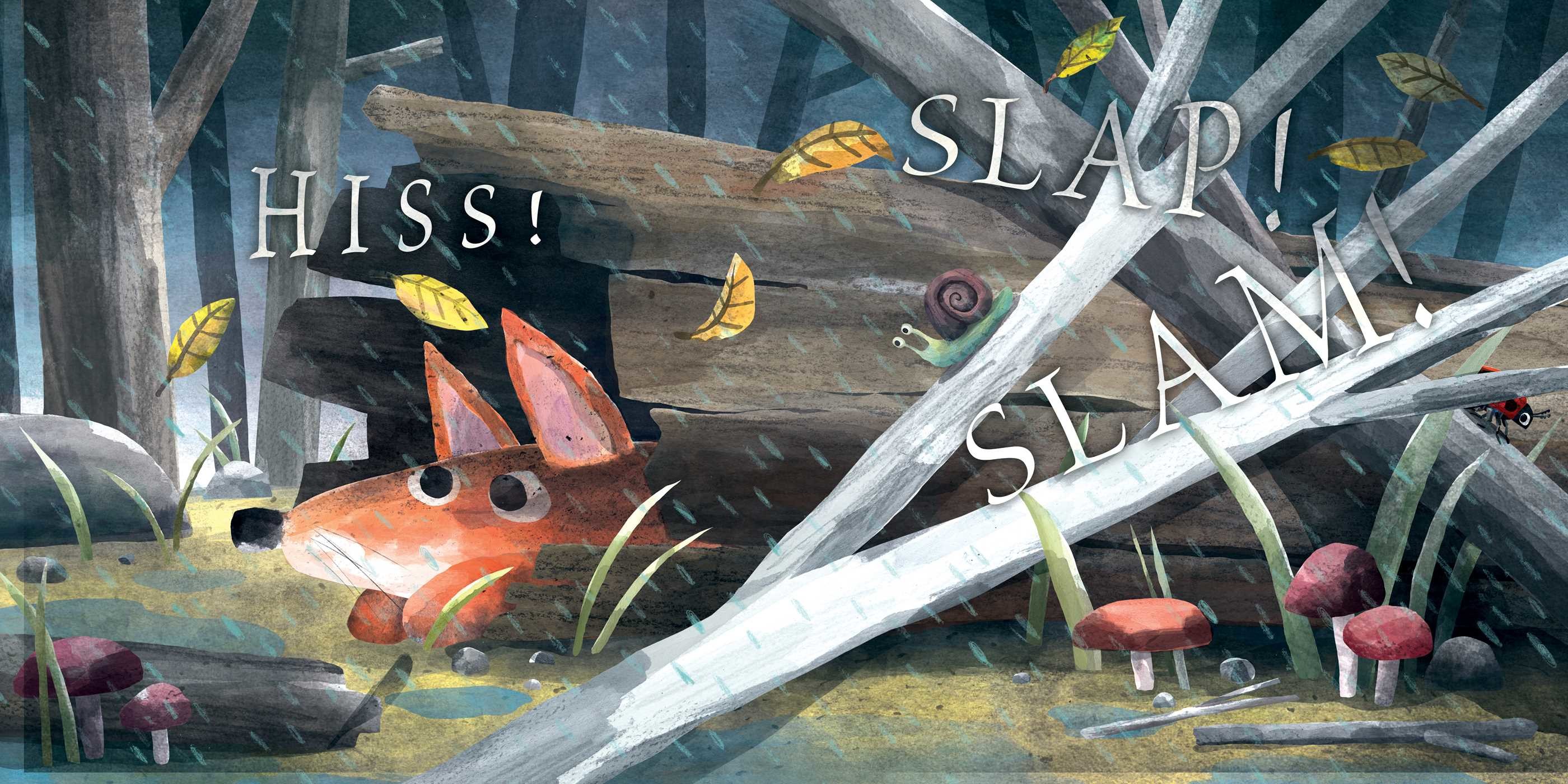 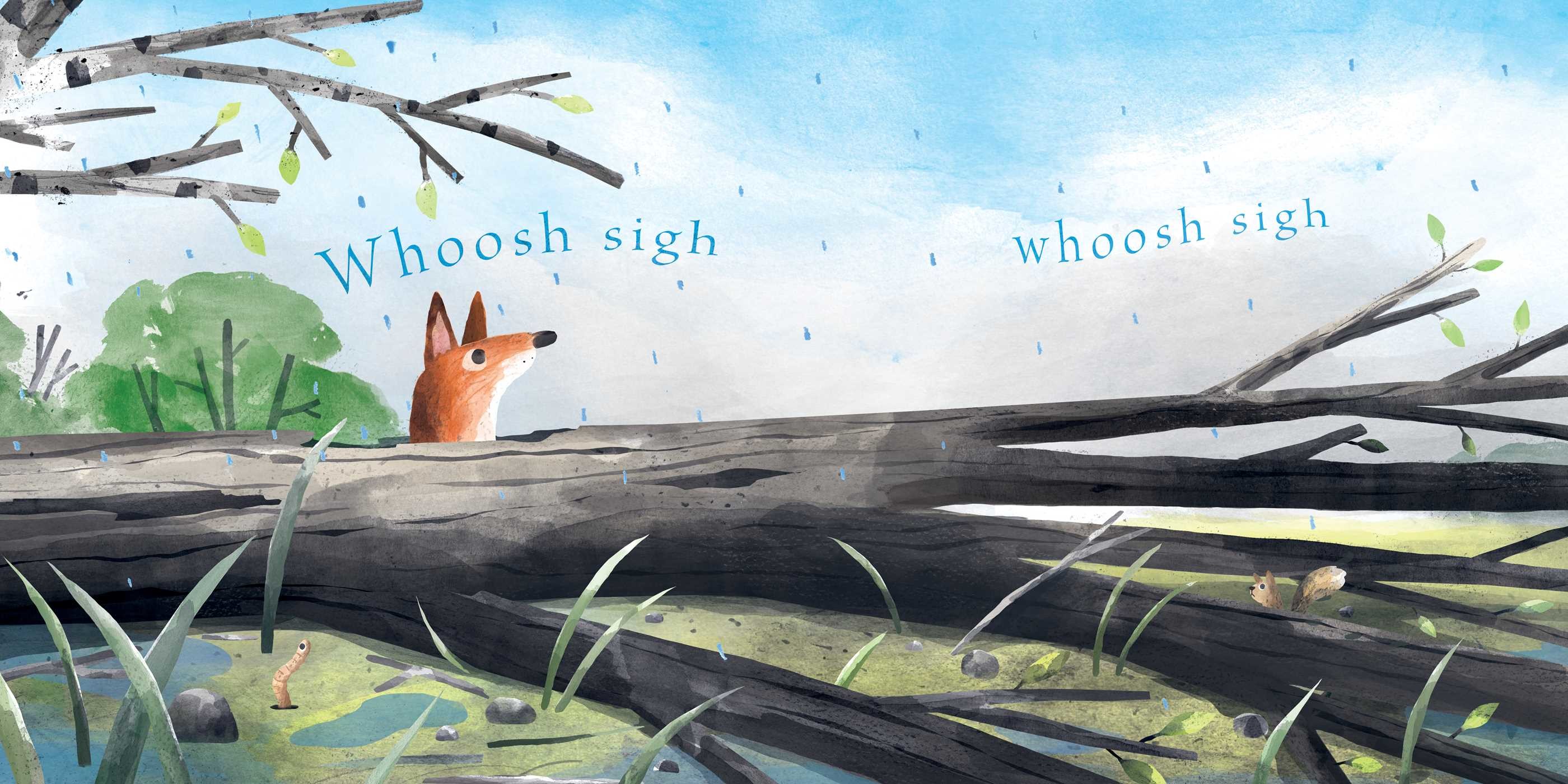 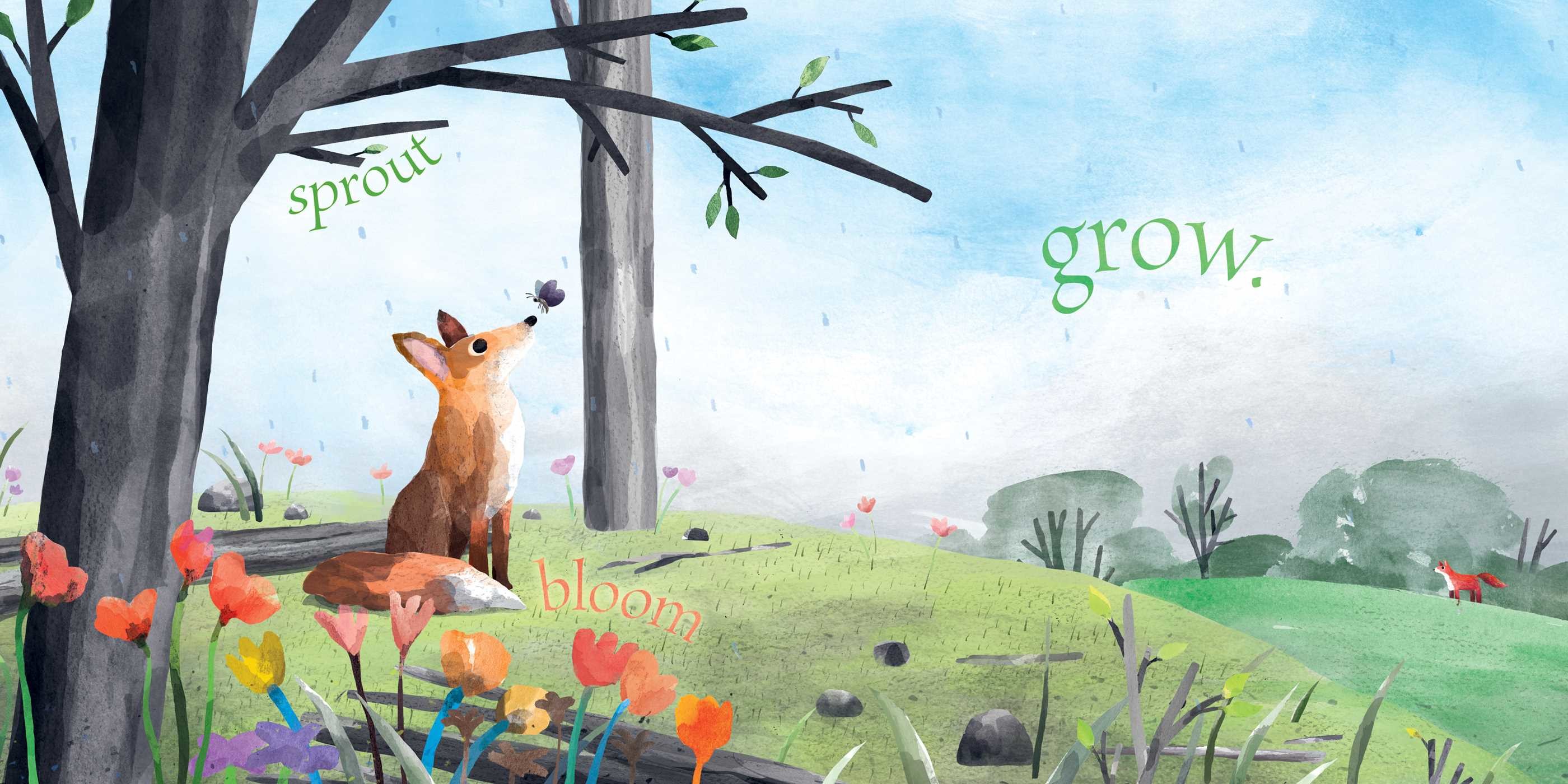 “McCanna’s carefully chosen words are nearly all onomatopoeia, a cacophony of water sounds that resonates on tongue and ear, demanding to be read aloud…Beautiful.” —Kirkus Reviews (starred review)

In glorious onomatopoeia, Tim McCanna takes the reader on a dazzling journey as a fox seeks shelter from a rainstorm.

As the rain begins, a little fox seeks shelter. But then it builds and builds into to a torrential storm.

Both a visual feast and a joy to read aloud, this stunning picture book showcases the power and beauty of nature.

Tim McCanna is the author of Bitty Bot, Bitty Bot’s Big Beach Getaway, Dinosong, and Watersong, which was called a “joyful, gorgeous book” by Booklist. When he’s not writing books for children, Tim enjoys volunteering for SCBWI and taking trips to the beach. Tim has worked in advertising, written musicals, and played accordion in several bands before becoming a children’s book author. He lives in San Jose, California, with his wife and two kids. Visit him at TimMcCanna.com.

Richard Smythe is making a splash in the book world with Beep Beep Beep Time for Sleep, Watersong, Dozy Bear and the Secret of Sleep, and Dinosong. He’s been drawing since he was little, when he would deface his sister’s homework. Since then he has received an MFA in illustration from the University of Hertfordshire. Richard lives in the United Kingdom. Visit him online at Richard-Smythe.co.uk.

McCanna's carefully chosen words are nearly all onomatopoeia, a cacophony of water sounds that resonates on tongue and ear, demanding to be read aloud. . . . Beautiful.

McCanna’s use of onomatopoeic words helps the natural scenes come to life, as do the spare rhyming text; both will aid preemergent readers. The delightful full-spread illustrations and the size and colors of the text add to the mood of the prose.

A pitch-perfect selection for a drippy afternoon or for a tuck-in story after Mom or Dad has dragged home late from work.

– The Bulletin of the Center for Children's Books, December 2016

The rhythm of nature and the beauty of a rainfall and its aftermath suffuse this simple story, as enticing pictures and rhyming language encourage readers to follow an orange fox. Padding through the marsh, the fox passes animals of the wetlands. A lush vocabulary of onomatopoeic sounds abound: ducks “splish splosh swish slosh,” dramatic white rain droplets “drip drop, plip plop,” and the rushing river goes “trickle dribble gurgle burble babble bubble.” As the fox hurtles down the river—“POP!”—it goes down a cascade in the rapids and ends up in a log, as leaves and branches swirl in the wind. Finally, with a glorious “whoosh sigh,” a dazzling rainbow appears. The fox finds its family and joyfully leaps through the sparkle and glitter. Full-color spreads in realistic watercolor depict a changing landscape and the plant and animal life of the watershed. The afterword gives information on the aquatic ecosystems, the progression of the water cycle, and the habitat of the omnivorous fox. A joyful, gorgeous book.

Tim McCanna’s language is both melodious and spare, with only a few evocative words on each page (“squish squelch glop”) that capture both the diversity of water sounds and the music of language. Richard Smythe’s ravishing illustrations mine the depths of grays and blues, zooming in to watch a mouse duck for shelter and then whirling to the sky to show the fox tracking an inundated stream. . . . Watersong [is] the rare book that can satisfy toddlers and bigger kids at the same time.