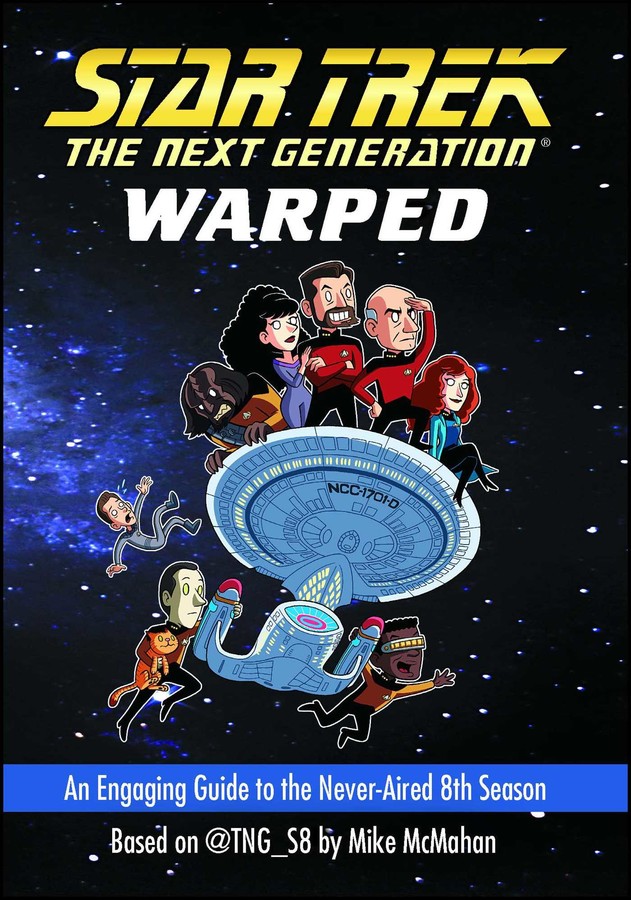 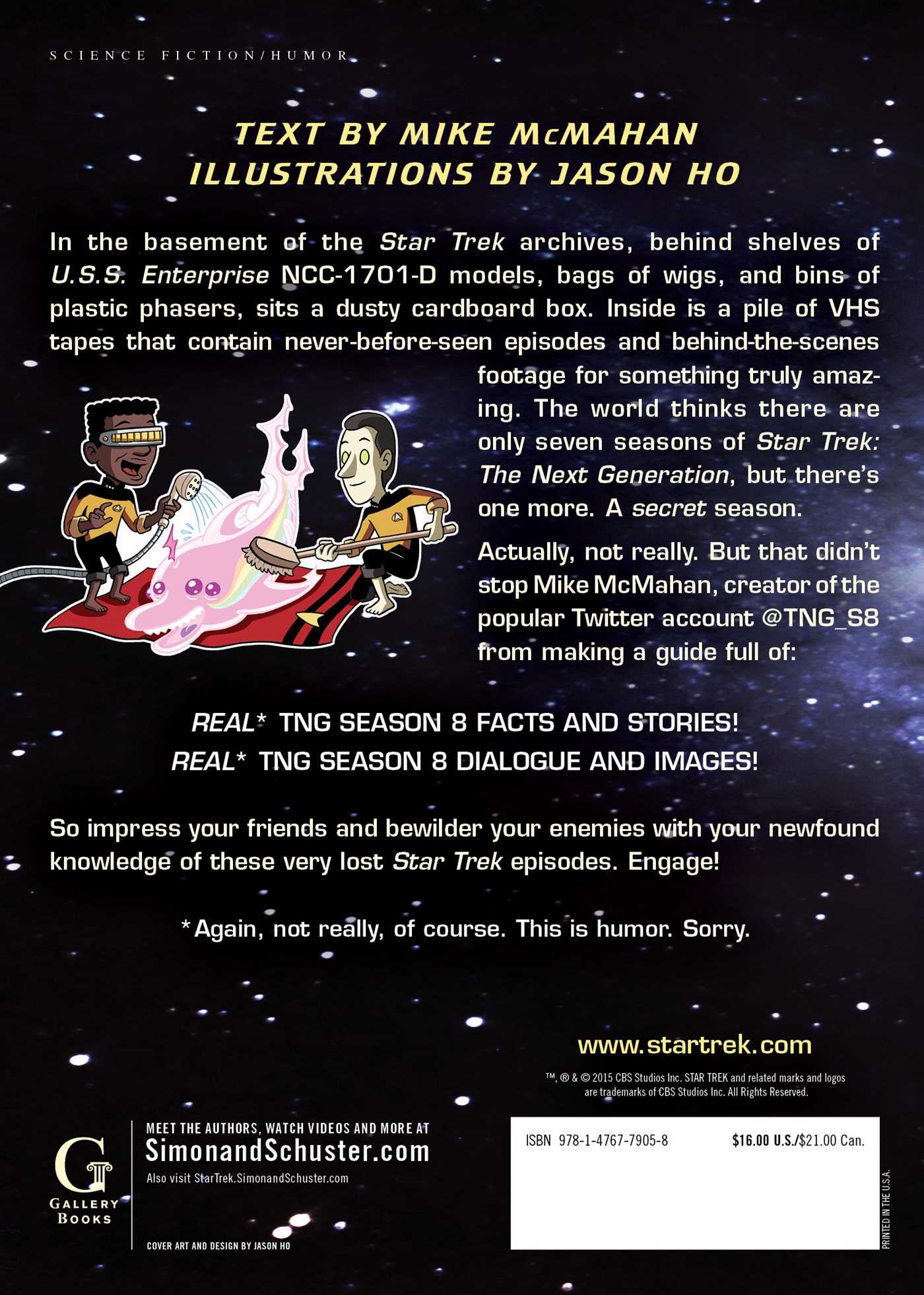 An Engaging Guide to the Never-Aired 8th Season

The official parody guide to the unaired eighth season of Star Trek: The Next Generation, based on the popular @TNG_S8 Twitter account from creator Mike McMahan!

In the basement of the Star Trek archives, behind shelves of U.S.S. Enterprise NCC-1701-D models, bags of wigs, and bins of plastic phasers, sits a dusty cardboard box. Inside is a pile of VHS tapes that contain never-before-seen episodes and behind-the-scenes footage for something truly amazing. The world thinks there are only seven seasons of Star Trek: The Next Generation, but there’s one more. A secret season.

Actually, not really. But that didn’t stop Mike McMahan, creator of the parody Twitter account @TNG_S8, from making a guide full of:

So impress your friends and bewilder your enemies with your newfound knowledge of these very lost Star Trek episodes! Engage!

“Crushers Not Included” Stardate 47995.8
The U.S.S. Enterprise-D zooms through space, narrowly avoiding lots of little rainbow streaks. On the bridge, Counselor Deanna Troi is halfway through a pretty impressive waffle cone sundae when, struck by a massive ice cream headache, she screams, bumps into a console, and rolls on the deck. Revived in sickbay, she describes an intense mint chocolate chip vision: Wesley Crusher and the Traveler both plugged into electronic chambers, surrounded by menacing sugar cones. She’s pretty sure the cones and the dancing cherries were constructs of her imagination, but the rest was far too convincing: it had to be real.

The previous year, Wesley forwent his Starfleet career to join the Traveler’s exploration of the dimensionverse as a being of pure energy. Wes should be floating around space, examining different cultures, appearing in cloud form doing cloud things (hanging out, observing, drifting)—but Troi thinks her premonition is clear: he’s in danger. She tries to convince Captain Jean-Luc Picard that her vision is a creamy cry for help, but they’re interrupted by a red alert: the Enterprise sensors have detected one of the worst things they can detect—the Borg. Troi is starting to understand what her dream actually meant; she knew those damn sugar cones were up to no good. Now they have to rescue Wes. As massive and glorious a vessel as the Enterprise is, it still manages to be really good at hiding; the crew tucks her in behind a large asteroid while her sensors peek out to detect dozens of Borg cones swirling around a starship factory. Troi was right, these Borg have upgraded from their usual cubes to the pointier, deadlier, conier shapes swirling before them. Wes and the Traveler must be trapped inside.

Confident that daily yoga and meditation has subdued his Locutus identity, Picard and an away team beam into the factory and find Wesley and the Traveler plugged into the main power relay. The Borg are harvesting their interdimensional energies to power their entire operation; Wes and the Traveler yelp as little diodes zap their heads. Picard climbs up on their enclosure and frees them by pushing down on the lid of their prison and turning it clockwise—back in his Locutus days, he learned the Borg use simple child-safety mechanisms to keep drones from opening containment chambers, getting under the sink, etc.

Alerted to their escape, Borg drones now attack in full force. After some wrist chopping and corridor running, they’re all surrounded. As they’re about to be prodded by the whirring mechanical tidbits on the Borg’s hands, the Traveler sacrifices himself, overloading the factory by scattering its matter across an infinity of parallel space dimensions, giving Wes and the captain the time to beam over to the Enterprise.

Back in sickbay, Troi offers Picard and Wes sundaes (she can sense they need to relax, and nothing relaxes like Rocky Road). Picard and Wes are appreciative, but they decide to hook up to medical equipment and get treated anyway because Troi isn’t the best authority when it comes to third-degree burns. While the purple lights repair their skin, Picard and Wes discuss the future. The captain consoles his young friend for his loss—he knows Wesley really cared for the Traveler. Wes thanks him, but admits that he’s tired of floating around the universe: he misses normal corporeal stuff like eating, cracking knuckles, and waiting in line for things. Even though sticking to one dimension will cause his new powers to quickly fade, he’d like to rejoin the Enterprise crew, if they’ll have him. Before Picard can speak, he adds that Starfleet Academy can go to hell: he’s never going back there. Picard welcomes him aboard the ship and appoints him the rank of honorary cadet. Wes is slightly miffed, thinking he should probably have a higher rank, on account of hello, all the godlike knowledge he’s been gathering? But this request is greeted with a hearty laugh from Picard, Dr. Crusher, the assistants in sickbay, and some ensigns who happened to be passing by.

The secondary storyline features a more personal adventure. Left in charge of the Enterprise while Picard is leading the rescue team, Commander William T. Riker is trying to concentrate on his duties, but he’s having a hard time because he’s distracted by his new, high-tech sleeping blouse. The LuxComfort Ultra Blouse is composed of nanotech memory silk that can read and remember how each of his romantic partners prefers the garment to hang off his body (some of the ladies like to see that upper thigh hair, while others prefer to leave that to their imaginations). The blouse changes color depending on the level of flirtation Riker’s throwing down, and his initials are microscopically embroidered on both breasts, the lapel, and all over the back. But during the Borg confrontation, it’s just common sense to have all power diverted to the shields, just in case the Borg get too frisky . . . and without an energy source, the LuxComfort blouse starts glitching out. It constricts, rolling Riker up like an elegant silk burrito. Then, it grows so large he can hardly move, swimming in a sea of shimmering blue fabric. Riker has always been adept at fighting his way out of things, and this garment is no different. He uses some rarely utilized textile jujitsu to free himself, but the blouse isn’t going to fold. It goes after Troi, dragging her away from Riker faster than he can full-sprint after it.

Once the Borg have been defeated, the Enterprise’s power is restored, and Riker is able to rescue Troi, who has been dangerously draped in the blouse’s deadly trim. Riker tames the blouse with a molecular hanger, safely sheathing it in a garment bag. Struck down by his own hubris, Riker is now aware of the dangers of such a high-tech frock. He locks it away and goes back to his trusty, old-fashioned nightshirt. However, the LuxComfort doesn’t like being locked away in a dark closet with Halloween costumes and out-of-style winter coats. It is patient garb, and one day it will have its revenge . . . unless it gets thrown out or donated.
Memorable Quotes
TROI

They were plugged into some kind of machine, being tortured. It was horrible.

Touch my blouse. It’ll relax you.

I’m serious, Will. It seemed so real.

Quiet, Wesley. Our safety depends on our discretion. We have to be vigilant not to alert the Borg to our—

I can’t wait to get back to the ship and see my mom!

Intruder alarms start blaring.
Trivia
Viewers might recognize the Borg wall alcove Wesley is trapped in. It’s actually a tanning bed, spray-painted black with rubber hoses attached. The Season 8 writers demanded it be built into the episode because it looked so futuristic, but mostly so they could have a tanning bed. From this episode on, most pictures of the crew feature them with bronzed, golden skin.

Camera operators had to be very careful during the filming of this episode, as the props department was out of dummy prop phasers and had to use real ones. Dangerous and unpredictable, real phasers are usually wielded only in close-up shots because of the high insurance premiums required (premiums that rose dramatically after an extra was disintegrated during the filming of the TOS episode “Friday’s Child”).

The silk for Riker’s sleeping blouse exhausted the entire annual silk budget for both Paramount’s film and television studios.
Mistakes and Goofs
The first Borg drone that the Enterprise away team encounters should not have waved or said “Um, hey.” A Borg drone would never do this, and, even if so, would only have been on Star Trek: Voyager. Eagle-eared viewers can also hear the same Borg say “I think Claire’s leaving me” later in the episode.

This is the only episode where Wesley Crusher has a spider face-tattoo. It was ultimately removed for later episodes because aggressive arachnid face art didn’t fit his character, even if it did make him look cool.

Mike McMahan, creator of the Twitter account @TNG_S8, is a TV comedy writer whose credits include Adult Swim’s Rick and Morty and FOX’s Axe Cop. He lives in Los Angeles with his wife, son, and cat named Riker.

An Engaging Guide to the Never-Aired 8th Season