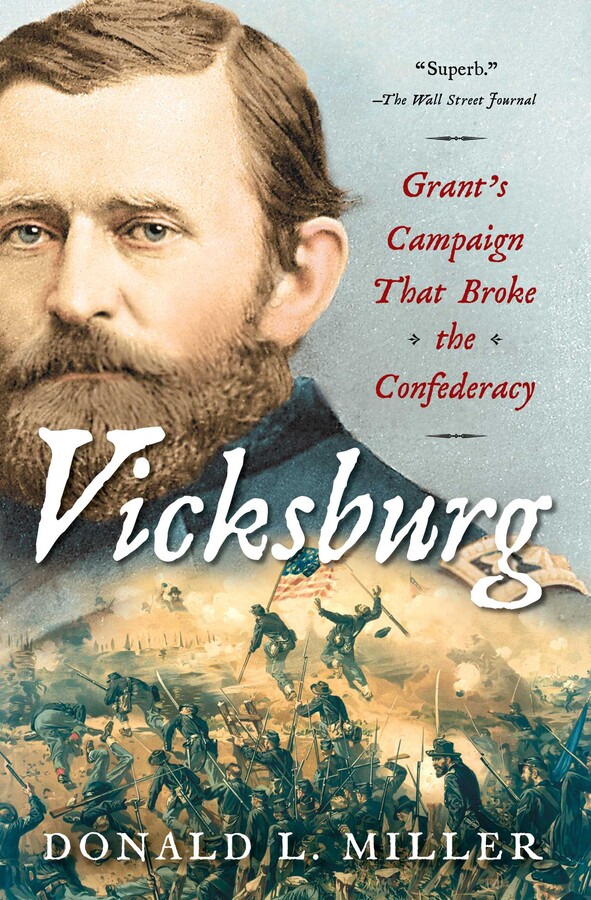 Grant's Campaign That Broke the Confederacy

“A superb account” (The Wall Street Journal) of the longest and most decisive military campaign of the Civil War in Vicksburg, Mississippi, which opened the Mississippi River, split the Confederacy, freed tens of thousands of slaves, and made Ulysses S. Grant the most important general of the war.

Vicksburg, Mississippi, was the last stronghold of the Confederacy on the Mississippi River. It prevented the Union from using the river for shipping between the Union-controlled Midwest and New Orleans and the Gulf of Mexico. The Union navy tried to take Vicksburg, which sat on a high bluff overlooking the river, but couldn’t do it. It took Grant’s army and Admiral David Porter’s navy to successfully invade Mississippi and lay siege to Vicksburg, forcing the city to surrender.

In this “elegant…enlightening…well-researched and well-told” (Publishers Weekly) work, Donald L. Miller tells the full story of this year-long campaign to win the city “with probing intelligence and irresistible passion” (Booklist). He brings to life all the drama, characters, and significance of Vicksburg, a historic moment that rivals any war story in history. In the course of the campaign, tens of thousands of slaves fled to the Union lines, where more than twenty thousand became soldiers, while others seized the plantations they had been forced to work on, destroying the economy of a large part of Mississippi and creating a social revolution. With Vicksburg “Miller has produced a model work that ties together military and social history” (Civil War Times).

Vicksburg solidified Grant’s reputation as the Union’s most capable general. Today no general would ever be permitted to fail as often as Grant did, but ultimately he succeeded in what he himself called the most important battle of the war—the one that all but sealed the fate of the Confederacy.

Donald L. Miller is the John Henry MacCracken Professor of History Emeritus at Lafayette College and author of ten books, including Vicksburg, and Masters of the Air, currently being made into a television series by Tom Hanks. He has hosted, coproduced, or served as historical consultant for more than thirty television documentaries and has written for The New York Times, The Washington Post, and other publications.

“A superb account of both military leadership and soldierly warfare. . . . Books like Vicksburg are exactly what Thomas Hardy had in mind when he wrote that ‘war makes rattling good history.’”

“Carefully researched and written with sizzling and persuasive prose, Miller has found the way to write both military and emancipation history in one profound package.  Never have headquarters, slave quarters, and the ultimate purpose of the war been so seamlessly and brilliantly demonstrated.”

"Miller does an excellent job of illustrating Grant's growth as a commanding general. . . . Well-written and narrative-driven, Donald Miller has provided a book that offers a thoughtful reconceptualization of the Vicksburg Campaign by taking a broad chronological approach and pairing military and political affairs."

“Miller has compiled the best single-volume treatment of the Vicksburg Campaign. His riveting narrative is well researched and highly informative. . . . A tour de force.”

"Miller has crafted an insightful and striking look at the actions of General Grant at a turning point not only of the Civil War but also of American history. This is a great book and one that Civil war enthusiasts should read.”

“The fullest and best history of the Vicksburg campaign.”

“[Vicksburg] was the most satisfying Union campaign of the war, and Miller chronicles it with aplomb. An expert, detailed account that should remain the definitive account for quite some time.”

"This is a magnificent book, certainly one of the very best ever written about the Civil War. It has breadth and depth, and it is written in a way that makes the reader truly understand not only the battle and siege of Vicksburg, not only the Civil War, but war itself."

"Authoritative, complete, engaging, and enjoyable. . . . Brings to the reader all the rich and crucial history of Ulysses S. Grant's Vicksburg campaign. . . . Vicksburg will become a Civil War standard."

“Miller deftly conjures the campaign's uncertainty and drama—the surprises that lay around every bend of the region's forbidding terrain and swampy waterways. At the heart of his story is U.S. Grant, who emerges here as a master of maneuver and improvisation, and a hero made human and real. This is military history at its best.”

– Elizabeth R. Varon, author of Armies of Deliverance: A New History of the Civil War

“This superbly written narrative is a portrait of America’s greatest soldier, warts and all, an accounting of Grant’s moral evolution on the slave question, of his many tactical gambles and errors, as well as his strategic triumph in the decisive campaign of America’s most important war.  We also meet ordinary soldiers, hear the iron dice roll, smell swamps and river lands that impede key logistics in the far-flung Western theater, feel the summer heat and thickly humid air. Most remarkably, we are guided up and down the Mississippi over the course of the greatest amphibious campaign of the 19th century.”

– Cathal J. Nolan, author of The Allure of Battle, winner of the 2018 Gilder Lehrman Prize for Military History

“Grant has had his biographers over the years, but in Miller he has finally found a writer who captures him in his completeness as a man and a military leader, overcoming heavy odds and repeated failures to win the decisive campaign of the war.”

"Miller provides important context for the final siege of Vicksburg by explaining why the city was vital to control of the Mississippi. . . . He superbly integrates events in Washington, keeping primary attention on those in the field of battle and emphasizing the role of freedmen in the victory. . . . Highly recommended."

Grant's Campaign That Broke the Confederacy