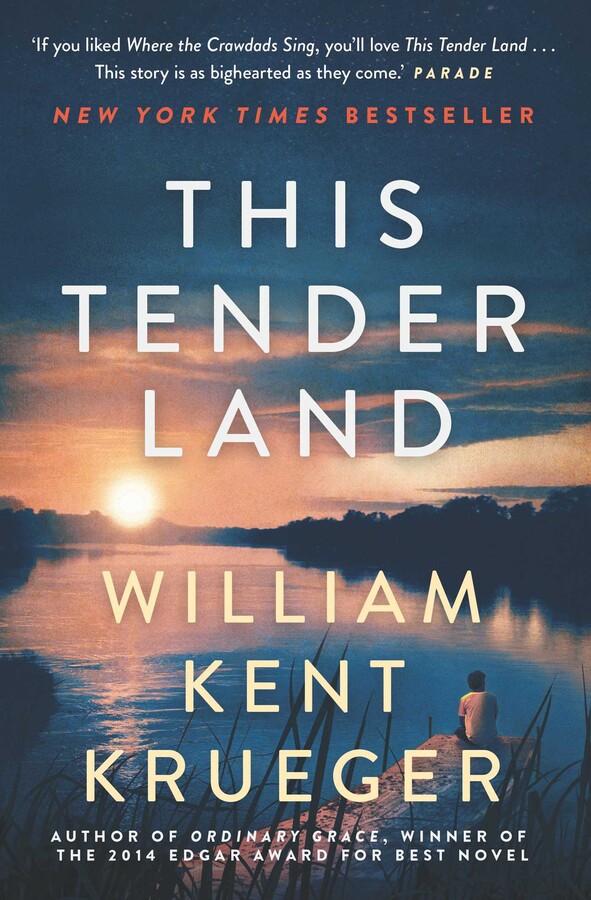 INSTANT NEW YORK TIMES BESTSELLER!
A magnificent novel about four orphans on a life-changing odyssey during the Great Depression, from the bestselling author of Ordinary Grace.

1932, Minnesota—the Lincoln School is a pitiless place where hundreds of Native American children, forcibly separated from their parents, are sent to be educated. It is also home to an orphan named Odie O’Banion, a lively boy whose exploits earn him the superintendent’s wrath. Forced to flee, he and his brother Albert, their best friend Mose, and a brokenhearted little girl named Emmy steal away in a canoe, heading for the mighty Mississippi and a place to call their own.

Over the course of one unforgettable summer, these four orphans will fly into the unknown and cross paths with others who are adrift, from struggling farmers and traveling faith healers to displaced families and lost souls of all kinds.

With the feel of a modern classic, This Tender Land is an en­thralling, big-hearted epic.


"If you’re among of the millions who raced through Where the Crawdads Sing this year and are looking for another expansive, atmospheric American saga, look to the latest from Kreuger." —Entertainment Weekly

"Long, sprawling, and utterly captivating, readers will eat up every delicious word of it.” —New York Journal of Books

This reading group guide for This Tender Land includes an introduction, discussion questions, and ideas for enhancing your book club. The suggested questions are intended to help your reading group find new and interesting angles and topics for your discussion. We hope that these ideas will enrich your conversation and increase your enjoyment of the book.

In Minnesota, in the summer of 1932, on the banks of the Gilead River, the Lincoln Indian Training School is a pitiless place where Native American children, forcibly separated from their parents, are sent to be educated. It is also home to Odie O’Banion, a lively orphan boy whose exploits constantly earn him the superintendent’s wrath. Odie and his brother, Albert, are the only white faces among the hundreds of Native American children at the school.

After committing a terrible crime, Odie and Albert are forced to flee for their lives along with their best friend, Mose, a mute young man of Sioux heritage. Out of pity, they also take with them a brokenhearted little girl named Emmy. Together, they steal away in a canoe, heading for the mighty Mississippi in search of a place to call home. Over the course of one unforgettable summer, these four orphan vagabonds journey into the unknown, crossing paths with others who are adrift, from struggling farmers and traveling faith healers to displaced families and lost souls of all kinds.

1. Although Odie and Albert find themselves in a boarding school for Native American children, most of the Native children don’t actually speak in the story. The Native character whom readers get to know best is Mose, and he is mute and “speaks” only through sign language. Why do you think the author chose silence as a way of depicting the children at the school?

2. Trying to understand the nature of God is one of the many struggles for Odie during his experiences in the summer of 1932. Is Odie the only one struggling with this issue? What sense do you have concerning the way the other vagabonds feel about the nature of God? What about the people they meet on their travels? How does Odie’s relationship with God change over the course of his journey?

3. When Odie and Albert attempt to buy boots, the clerk is skeptical that Albert and Odie would be able to afford the $5 price tag. After Odie lies about getting the money from their father, a second clerk remarks, “If he got a job these days, he’s one of the lucky ones.” This is Odie and Albert’s first experience of life outside of the Lincoln School. What sense of the current state of the world do you get from this encounter?

4. When Odie is working for Jack in his orchard, Jack explain his religious philosophy, saying, “God all penned up under a roof? I don’t think so.” Where does Jack think God is really to be found? What is it in Odie’s experience that makes him disagree with Jack’s outlook?

5. After having escaped Jack, the vagabonds encounter a Native American man named Forrest. He appears friendly and shares a meal with them, but he’s also aware that there is a $500 reward for their capture—a huge amount of money at the time. The children are unsure whether to trust him or not. What would you do in their situation?

6. Tent revivals—places where Christians would gather to hear religious leaders speak—were common in the Great Depression, often traveling across the country from town to town. They offered hope to people in desperate times, as Sister Eve does to Odie, Albert, Emmy, and Mose. However, Albert is skeptical of Sister Eve’s healings, calling her a con. What do you believe about Sister Eve’s ability to heal? What is the con that Albert is warning Odie about?

7. Why does Odie trust Sister Eve so wholeheartedly, but not her partner, Sid? Do you think he’s right to draw the conclusions he does about Sid from their interactions? How do some of Odie’s misjudgments lead to disastrous consequences? In your opinion, is what happens to Albert in some way Odie’s fault?

8. When the vagabonds encounter the skeleton of a Native American boy, Albert says there’s nothing they can do, but Mose reacts very differently. Later, he wanders off from the group to learn about the Dakota Conflict of 1862, which resulted in the execution of thirty-eight Sioux and the deaths of hundreds more. How does knowledge of this history change how Mose perceives himself? What impact does hearing this story have on Odie? On you?

9. Hoovervilles (named for President Herbert Hoover) were shantytowns that sprang up all across America during the Great Depression for homeless individuals and families. In difficult times like this, how do people like the Schofields survive? Is there an expectation that the government will help them, or do they look to other sources for assistance? How do the residents of this particular Hooverville pull together? How are they driven apart?

10. The Flats is like no other place the vagabonds have been on their journey. What makes it so unusual? When John Kelly is stopped by a policeman, why does he feel he has to say he is from a different part of town? Despite making a new friend, why is Odie so unhappy during the time he spends there?

11. When Odie is on his own, riding the rails, trying to get to St. Louis, he comes face to face with danger and violence. Do you think he was foolish for striking out alone? How was this encounter different from the things he experienced at Lincoln School?

12. Odie is a born storyteller even at his young age. Throughout the book he tells Albert, Emmy, and Mose tales about an imp, a princess, and the vagabonds. What purpose do these stories serve in the novel?

13. Sister Eve says to Odie that the only prayer she knows will absolutely be answered is a prayer for forgiveness. What do you think she means by this? Who are the people whom Odie needs to forgive, and for what reasons?

14. Odie, Albert, Mose, and Emmy are all searching for peace and a place to call home. What do you think each character is looking for and what are their different definitions of home? In the end, do they all find what they are looking for, and if so how?

15. The author has said that he drew inspiration from the works of Mark Twain, Charles Dickens, and Homer. Do you find elements of works by those authors in This Tender Land? Why or why not? Are there other authors whose work this story calls to mind?

16. In the story, Odie speaks of the journey he and the other are on as an odyssey. Do you see echoes of Homer’s epic poem in the children’s experiences? If so, can you identify Homer’s poetic counterpart for each section of the story?

1. For your next book club gathering, plan to meet somewhere outdoors and go on an adventure whether by foot or canoe. Discuss with your group what you notice about the landscape around you. How is the Midwestern landscape a part of Odie’s story and what connections to This Tender Land can you make to your own life and the place that you live?

2. Download the This Tender Land Spotify playlist and listen to some of the songs with your group. Discuss your favorite scenes in the book that feature music and how it changes your reading experience to hear the songs alongside them. Do you think the songs enhance the story? How?

3. Similar books about coming of age over one season like The Body by Stephen King and This Boy’s Life by Tobias Wolff have been adapted to the big screen. (The film based on The Body was titled Stand by Me.) If This Tender Land were turned into a film, which actors would you want to play the main characters (Odie, Sister Eve, Mrs. Brickman, et al.)? What scenes from the book would you most like to see on the big screen?

SEE ALL
See more by William Kent Krueger
Thank you for signing up, fellow book lover!