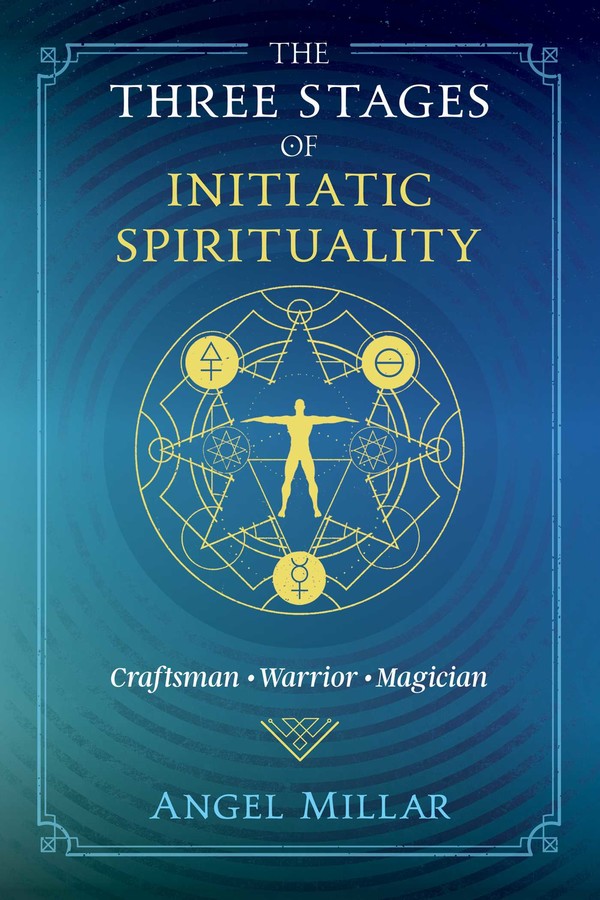 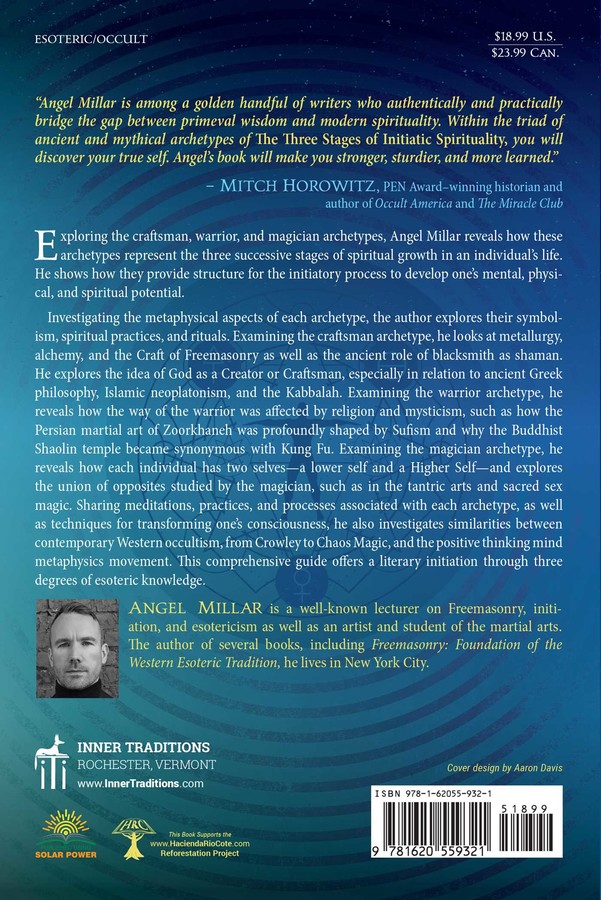 The Three Stages of Initiatic Spirituality

Exploring the craftsman, warrior, and magician archetypes--three vocations that echo the traditional tripartite division of society--Angel Millar reveals how these archetypes represent the three successive stages of spiritual growth in an individual’s life. He shows how they provide structure for the initiatory process to develop one’s mental, physical, and spiritual potential. As craftsman, the individual experiences “mnemonic” initiation: the cultivation of memory as well as language. As warrior, “somatic” initiation: development of the physical body and cultivation of the spirit body. And as magician, “gnostic” initiation: cultivation of the self and manifestation of the Higher Self.

Investigating the metaphysical aspects of each archetype, the author explores their symbolism, spiritual practices, and rituals. Examining the craftsman archetype, he looks at metallurgy, alchemy, and the “Craft” of Freemasonry, as well as the ancient role of blacksmith as shaman. He explores the idea of God as a “Creator” or “Craftsman,” especially in relation to ancient Greek philosophy, Islamic neoplatonism, and the Kabbalah. Examining the warrior archetype, he reveals how the way of the warrior was affected by religion and mysticism, such as how the Persian martial art of Zoorkhaneh was profoundly shaped by Sufism and why the Buddhist Shaolin temple became synonymous with Kung Fu. The author places special emphasis on the cultivation of subtle energy as practiced in martial arts, especially in relation to Taoist inner alchemy. Examining the magician archetype, he reveals how each individual has two “selves”--a lower self and a Higher Self--and explores the union of opposites studied by the magician, such as in the tantric arts and sacred sex magic. Sharing meditations, practices, and processes associated with each archetype, as well as techniques for transforming one’s consciousness, he also investigates similarities between contemporary Western occultism, from Crowley to Chaos Magic, and the “positive thinking” mind metaphysics movement.

Structured to parallel the three archetypal stages of the initiatic process, this comprehensive guide offers a literary initiation through three degrees of esoteric knowledge.

Craftsman. Warrior. Magician. As if an echo reverberating through the millennia, these three words remind us of something that lies buried deep in the history of mankind and deep within our own psyche. “Primitive” by the standards of modernity, when we reflect on them they nevertheless stir in us an awakening to our own potential, mental, physical, and spiritual.

In one form or another, the figures of the craftsman, the warrior, and the magician were known to every ancient culture on earth. In some cases, the functions of each could be performed by a single member of a tribe, with herders having to double as warriors, and with responsibility for performing religious or initiatory rituals falling to older members of the tribe or to the head of the household.

For many cultures, though, they were more than just duties, vocations, or positions in society. Together, the craftsman or farmer, warrior, and magician (sage, priest, or brahmin, etc.) characterized its very soul. Written around three millennia ago, in Iran, the sacred Avestan texts (of the world’s first monotheistic religion, Zoroastrianism) show us a culture composed of peasants and farmers, warrior nobles, and priests. Around two thousand years before this, claimed comparative philologist and mythologist Georges Dumézil, Indo-European societies (from which the Zoroastrian society ultimately emerged) had essentially the same three classes or castes.

However, it is possible that, as David W. Anthony has suggested, the herder/cultivator, warrior, and priest may have constituted “three age grades,” through which every man would pass, if he lived long enough. As is the case with the Maasai of Africa, the younger men might have worked as herders or artisans, while the elders of the tribe would have taken on the role of priests or spiritual guides. The profession of the warrior would, then, have been taken up by men between these two ages, when they were at their maximum physical strength.

If we think of the craftsman, warrior, and magician (or, more broadly, the shaman, brahmin, or tribal wise man, etc.) not merely as three vocations within society but as three types of consciousness within initiation itself, we might say that the craftsman who is aware of his role as an initiator has risen to the stage of the magician, brahman, or sage, etc., and returned to his vocation in a higher, priestly form. As an initiator, acting within his cult or Lodge, the images he passes on are the psychic, opening the Golden Age to the initiate, and reuniting him with the gods or God.

Traditionally, acceptance into a vocation often required the novice going through some kind of initiation ritual which imparted a mythology that explained how the art itself came into existence, which god or mythic figure created it, and what ethics and behavior is expected of the initiate.

Ritual initiation is, in effect, a kind of spiritual machinery or spiritual technology, not in the contemporary sense of these words, but in their original sense or, to point to a historical period, in the sense used by the ancient Greeks (Techne - technology, technique, craft, the act of crafting). By spiritual machinery, we are referring to several interrelated mythic and natural forces, most literally - or in the most outward sense – the machinery or tools of the gods or of the trade or guild: the hammer, chisel, square, compasses, fire, flint, and alchemical vessels, etc., which appear in the initiation ritual as symbols of a higher and deeper reality.

The root of the term machinery is the Proto-Indo-European maghana, “that which enables.” It is related, also, to the Greek word makhaná (tool, means) and to the Old English mæg, meaning “I can,” and to the contemporary English word “may.” In the context of initiation, the machine that enables is the ritual itself, its set of procedure, movements, the unveiling of symbols and ritual objects, etc., reflecting the predictable movements of the planets; the seasons; of birth, life, and death, etc.

These things are not objects of devotion, per se, but hint at natural law or cosmic law, i.e., an all-pervasive cosmic Intelligence, Consciousness, or Law Giver that has set everything in motion. The heavens and earth are, in other words, a kind of machine of God or the gods, and the initiatic ritual emulates and connects the initiate to its essence, or the fuel, of existence.

Initiation unveils the workings of the cosmos outside of the initiate and points to his place within it and to the path he might take through it, toward the Divine. He is not a cog but a star, a universe - a microcosm that reflects the whole of existence and its essence. In attaining that that consciousness in which he feels he can understand, can do, and can cultivate a new, empowered way of living and being, he starts to glimpse, and to embody, what is sometimes called the Higher Self.
Angel Millar

Angel Millar is a well-known lecturer on Freemasonry, initiation, and esotericism as well as an artist and student of the martial arts. The author of several books, including Freemasonry: Foundation of the Western Esoteric Tradition, he lives in New York City.

“Angel Millar is among a golden handful of writers who authentically and practically bridge the gap between primeval wisdom and modern spirituality. Within the triad of ancient and mythical archetypes of The Three Stages of Initiatic Spirituality, you will discover your true self. Angel’s book will make you stronger, sturdier, and more learned.”

“This book is the result of stunningly broad in-depth research both on the theoretical and on the practical level--a researcher-practitioner at his very best. While Angel Millar has quite obviously done his homework in terms of sifting through the vast bibliography of anthropology, comparative religious studies, and magic, he also adopts a deeply informed and eminently experiential approach--because, as the famous quote goes, ‘tradition is not to adore the ashes, but to pass on the fire.’ This makes the entire treasure trove of academic and phenomenological wisdom come palpably alive on an unprecedented scale, guiding the reader through the respective iterations of the craftsman, the warrior, and the magician archetype in a both comprehensible and reproducible manner. Highly recommended!”

“Angel Millar provides the reader with an extremely valuable exploration of initiation and transformation. His astute scholarship ranges across many cultures and ages to identify how human beings have repeatedly found self-renewal and self-transcendence in three fundamental and universal aspects of life--the craftsman, warrior, and magician archetypes. He weaves together ancient traditional threads with the contemporary language and practices of psycho-spiritual alchemy and depth psychology, thus revealing a tapestry of timeless vision with immediate relevance and applicability. Anyone concerned with a comprehensive context in which to contemplate and facilitate their own initiatic and transformative journey will find this book worthy of repeated consultation.”

“Diving deep into the wisdom of the ancients, Angel Millar offers a refreshing answer to the existential crisis experienced by modern man. The Three Stages of Initiatic Spirituality presents holistic connections with divinity, achievable by the integration of body, mind, and soul through the three timeless archetypes of craftsman, warrior, and magician.”

“The Three Stages of Initiatic Spirituality is a comprehensive tour of the essentials of initiation and their importance in daily life. Taking the reader through the three traditional and crucial stages and exploring multiple spiritual traditions, Millar provides the reader with the background, purpose, and methods whereby these archetypal stages can be activated in the life of the individual. This is a book with an important message and will be valuable to anyone regardless of their particular path.”

– Mark Stavish, author of Egregores: The Occult Entities That Watch Over Human Destiny

"Angel Millar reminds us that initiation is involved with memory–we need not so much to learn new things as to remember old ones, buried deep within us. We explore with him the adjuncts of Kabbalah and the relevance of Neoplatonism, of death and rebirth and of our enlightened Self. An absorbing read, well worth it and one of the most important works to be published in recent times."

The Three Stages of Initiatic Spirituality