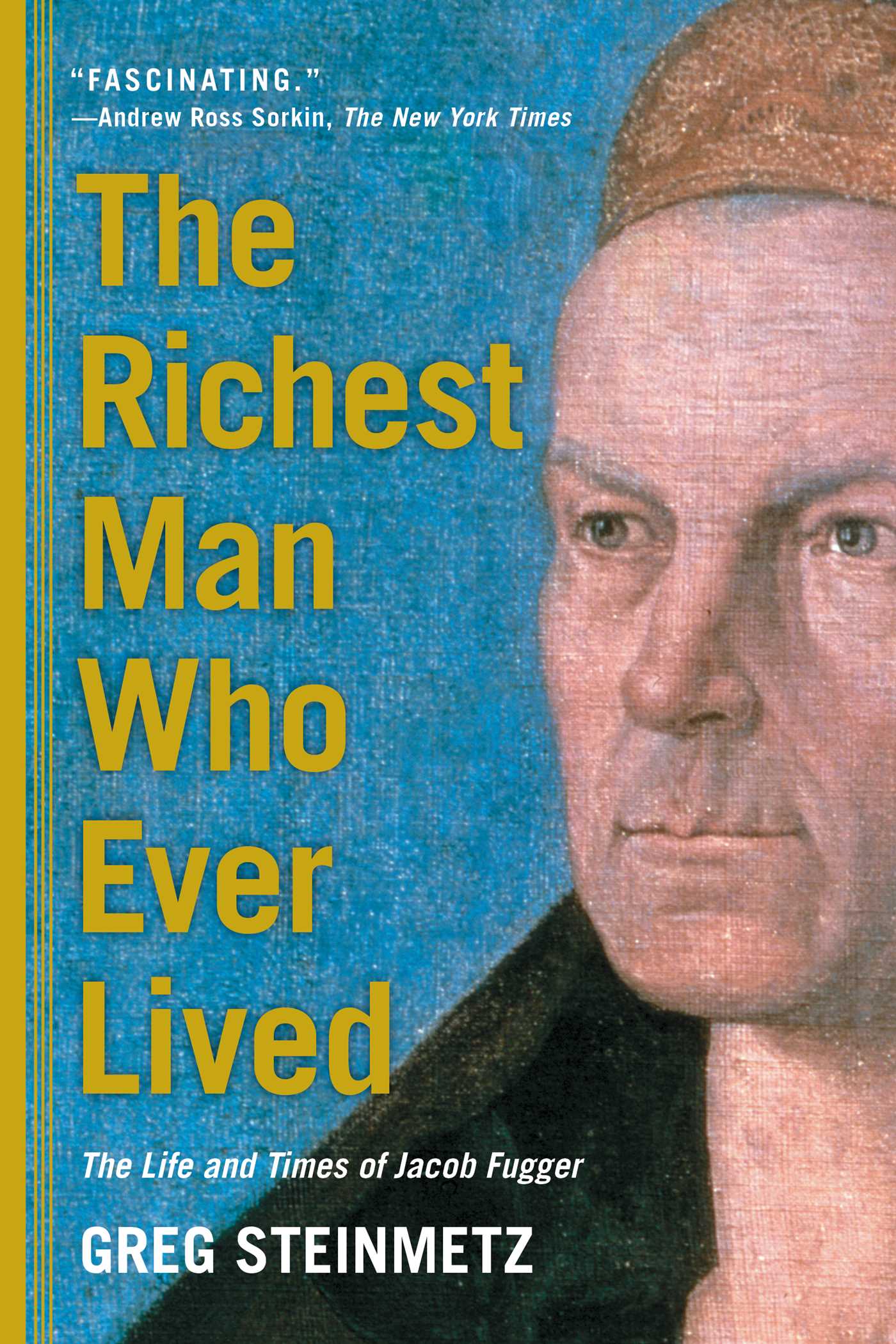 The Richest Man Who Ever Lived

The Life and Times of Jacob Fugger

“A colorful introduction to one of the most influential businessmen in history” (The New York Times Book Review), Jacob Fugger—the Renaissance banker “who wrote the playbook for everyone who keeps score with money” (Bryan Burrough, author of Days of Rage).

In the days when Columbus sailed the ocean and Da Vinci painted the Mona Lisa, a German banker named Jacob Fugger became the richest man in history.

Fugger lived in Germany at the turn of the sixteenth century, the grandson of a peasant. By the time he died, his fortune amounted to nearly two percent of European GDP. In an era when kings had unlimited power, Fugger dared to stare down heads of state and ask them to pay back their loans—with interest. It was this coolness and self-assurance, along with his inexhaustible ambition, that made him not only the richest man ever, but a force of history as well. Before Fugger came along it was illegal under church law to charge interest on loans, but he got the Pope to change that. He also helped trigger the Reformation and likely funded Magellan’s circumnavigation of the globe. His creation of a news service gave him an information edge over his rivals and customers and earned Fugger a footnote in the history of journalism. And he took Austria’s Habsburg family from being second-tier sovereigns to rulers of the first empire where the sun never set.

“Enjoyable…readable and fast-paced” (The Wall Street Journal), The Richest Man Who Ever Lived is more than a tale about the most influential businessman of all time. It is a story about palace intrigue, knights in battle, family tragedy and triumph, and a violent clash between the one percent and everybody else. “The tale of Fugger’s aspiration, ruthlessness, and greed is riveting” (The Economist).

Greg Steinmetz grew up in Cleveland, Ohio, and spent fifteen years as journalist for publications including the Sarasota Herald-Tribune, the Houston Chronicle, New York Newsday, and The Wall Street Journal, where he served as the Berlin Bureau Chief and later the London Bureau Chief. He currently works as a securities analyst for a money management firm in New York. He is a graduate of Colgate University and has a master’s degree from Northwestern University’s Medill School of Journalism. He has three children and lives in Larchmont, New York. The Richest Man Who Ever Lived: The Life and Times of Jacob Fugger is his first book.

“Fugger was the first modern plutocrat. Like his contemporaries Machiavelli and Cesare Borgia, he knew the world as it was, not how he wanted it to be. This is the absorbing story of how, by being indispensable to customers and ruthless with enemies, Fugger wrote the playbook for everyone who keeps score with money.  A must for anyone interested in history or wealth creation.”

– Bryan Burrough, author of Days of Rage and co-author of Barbarians at the Gate

"Greg Steinmetz has unearthed the improbable yet true story of the world’s first modern capitalist. Born in fifteenth-century Germany, Jakob Fugger overcame a common birth to build a fortune in banking, textiles, and mining that, relative to the size of the economy of that era, may be the greatest fortune ever assembled. Schooled in Renaissance Venice, he became a banker to successive Hapsburg emperors and kings in the dynamic decades when duchies and principalities were clawing to independence from the grasping clutches of the Holy Roman Empire. Steinmetz not only depicts the rise of novel industrial trends from metallurgy to mercantilism, he shows us the nation-state in its early, tentative incubation. At the story’s center is Fugger, a wily lender and capitalist who courted risk, defied potential bankruptcy, and made kings his virtual dependents. He emerges from this solidly researched and briskly narrated biography as surprisingly recognizable—a moneymaker from a distant time that, one suspects, would be thoroughly at home with the Midases of today."

– Roger Lowenstein, author of When Genius Failed and Buffett: The Making of an American Capitalist

“Jacob Fugger was the Rockefeller of the Renaissance. He was a capitalist genius who, in Greg Steinmetz, has finally found the English-language biographer he deserves. Steinmetz’s fast-moving tale—of money-making,  religious tumult, political chicanery and violent clashes between the disciples of capitalism and communism—is one for all time, but especially for our time.”

– James Grant, author of The Forgotten Depression: 1921, the Crash That Cured Itself

"One of the most influential financiers who ever lived, Jacob Fugger has long been shrouded in mystery.  If you want to understand this visionary (he backed Magellan's circumnavigation of the globe), controversial (he vigorously challenged Martin Luther), and daring money man, read Greg Steinmetz's captivating, clear-eyed account.  You'll be richer for it."

– Laurence Bergreen, author of Columbus: The Four Voyages and Over the Edge of the World: Magellan's Terrifying Circumnavigation of the Globe

"Greg Steinmetz has rescued from the footnotes of history the Renaissance equivalent of a modern day Zelig. Master money man Jacob Fugger pops up at virtually every critical moment of his era. Kings, emperors and popes all knew him. Now, thanks to this remarkably researched and fascinating book, we do, too."

"The tale of Fugger's aspiration, ruthlessness and greed is riveting."

"Provides a fascinating and useful cautionary tale of the dangers of unbridled capitalism, particularly in economies dominated by autocratic rulers."

"A colorful introduction to one of the most influential businessmen in history."

"Who says the biography of a German Renaissance banker has to be as dense and as dull as the Fed’s latest annual report? Certainly not journalist and Wall Street securities analyst Greg Steinmetz. In his first full-length history, a biography of a Renaissance industrialist and financier named Jacob Fugger, Steinmetz is witty, highly knowledgeable and always entertaining. . . . [A] brilliantly written story. . . . pure reading pleasure."

"Makes a persuasive case that Fugger was 'the most influential businessman of all time.' "

“[Steinmetz] writes about Fugger in thoroughly modern terms . . . a swift and compelling read.”

"Steinmetz makes a convincing case for the value of studying enigmatic banker Jacob Fugger. . . . A straightforward, engaging look at this 'German Rockefeller.'"

"Steinmetz lays out the fascinating story of a man who shaped modern business practices and the borders of Europe."

The Richest Man Who Ever Lived

The Life and Times of Jacob Fugger