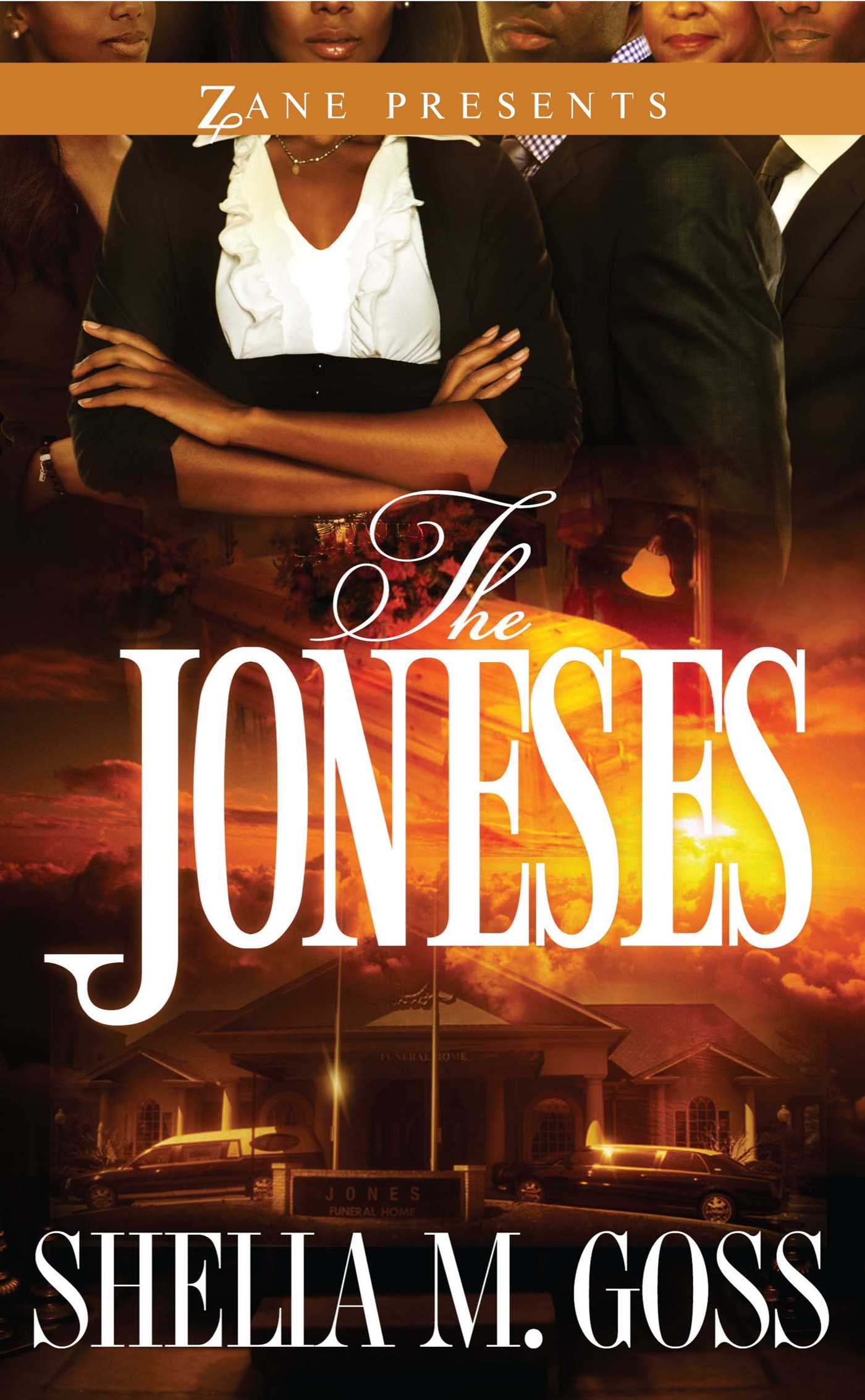 Keeping up with the Joneses isn’t all it’s made out to be. In this intriguing novel full of drama and plot twists, one family tries to hold on to their “perfect” life before their secrets, lies, and scandals are exposed.

On the outside, the Joneses seem like the ideal family: Royce Jones, a funeral home mogul, and his wife, Lexi, are parents to Charity, Hope, and Lovie—and everybody wants to be them. But it’s true that money can’t buy happiness, and the Joneses are harboring secrets that can’t stay hidden forever…

The funeral home business has been slow lately, and Royce is in serious trouble. When Lexi learns of their financial strain, she vows to hold on to her status by any means necessary—even if it means going behind her husband’s back. Lovie, seeing his beloved mother so stressed, will do whatever it takes to put a smile back on her face. And sibling rivalries tense up when Charity and Hope both fall for the same guy. On top of this, they all have secrets they’re hiding not only from people outside their family—but from each other. It’s only a matter of time before the Joneses’ perfect life goes spinning out of control and they’re revealed for who they truly are.

The Joneses CHAPTER 1 Lexi
Everybody wants to be like the Joneses, but do they really know what we go through to maintain our status? I think not. Life as Lexi Jones hasn’t always been a bed of roses especially when you’re married to Royce Jones. To the outside world, Royce Jones is the perfect pillar of the community. He’s taken his father’s funeral home business and made it into a multimillion dollar company within the last ten years. He’s been on the covers of several national magazines and interviewed for a variety of newspapers across the country.

So why am I sitting here at the country club, humiliated, because my platinum Visa card was declined? I can only imagine what those biddies are going to say if word gets out about this. Thankfully, I always carry cash on me, so I could take care of the bill.

“Mrs. Jones, it probably was just a simple mistake.”

I frowned. “I’m sure. I’ll call and get it straightened out.”

The waitress couldn’t even wait for me to get out of earshot. “Girl, what is this world coming to when the Joneses are having financial problems?”

Her friend responded, “That’s just one card. I’m pretty sure she has more where that one came from.”

I pushed my designer shades over my eyes and looked back at both of the women who had jealousy written all over their faces. I flashed my kilowatt smile, that I’d paid my dentist a mint for, and walked out of the country club.

The valet handed me the keys to my jet black Jaguar. The personalized license plates read BossLady.

I drove directly to RJ Jones Funeral Home. The parking lot was empty except for Royce’s and his assistant’s cars. I remember a time when the parking lot stayed full.

“Hi, Mrs. Jones,” Shannon said, when I entered. Shannon was cute, young, and petite. If she wasn’t Royce’s little cousin, she wouldn’t be working in that position.

I didn’t tolerate women outside of the family working in close proximity to my husband. I already had to deal with the women in our town who always found a reason to flaunt themselves around him, so I refused to have to concern myself with any of his employees. That was a promise Royce and I made when I agreed to go along with him taking over his father’s funeral home: no women workers unless they were related. And they had to be related to him; I didn’t trust any of my female relatives. Many would chop off my head to replace me. Family, got to love them.

“Shannon, is my husband busy?” I asked. I had no time for formalities.

“He’s in his office. You want me to ring him?” she asked.

“No need to.” I walked past her and down the hall to Royce’s office.

Royce had his chair turned toward the window so all I could see was his short, black, curly, hair. I can recall many days and nights of running my hands through it. Some of my friends’ husbands looked their age, but not Royce. My husband was as handsome now as he was the day I met him over thirty-something years ago. He was about to turn fifty and could give any twenty-five-year-old a run for his money in the body department.

“Baby, I know you’re there so you might as well say something,” Royce said, right before turning the black leather chair around.

I pulled out my Visa card and threw it on the desk in front of him.

“Tell me why my credit card was denied? And I want to know now.”

I tapped my foot with my hands planted firmly on my hips.

Royce just stared up at me. “Have a seat, Lexi.”

“Not until you tell me what’s going on.” I responded.

“If you take a seat, I will. I need to show you something.” He fumbled on his desk for a folder.

I plopped down in the chair across from his desk. “This better be good.”

“I’ve been meaning to have this talk with you, but it never seems like the right time. Now it seems like I have no choice.”

I waved my finger back and forth in the air. “Yada, yada. Enough of that. Get to the point, and stop beating around the bush.”

Royce looked me directly in my eyes. “Lexi, the funeral home has lost a lot of money, so I have to consolidate things until we get back on our feet financially.”

I blinked a few times, because I knew I didn’t hear what I thought I heard. “Come again?” I asked.

Royce reached for my hand on the desk and held it. “Baby, our money is low so we have to curb our spending.”

I snatched my hands away. “Royce Lee Jones. Are you telling me that we’re broke?”

He stood up, all six feet and one inch of him, and walked around the desk. He got down on bended knee in front of me. “No, baby, we’re not broke.” His voice trailed off and I swore I heard him add, “Yet.”

I couldn’t bear to look at him just then. All I could ask myself was, How could a multimillion dollar company be going broke? All of my hard work, helping him build this funeral home, and he’s talking about we’re broke. “I can’t believe this. When I was in the office every day, money was flowing in. What happened, Royce? What in the world happened?”

Royce tried to get me to look at him, but I refused to. I leaned back in my chair and crossed my arms.

“Come on, Lexi. I need you to be understanding about this and work with me.”

I uncrossed my arms. I stared at Royce directly in his eyes. If looks could kill, he would be in one of the coffins he sold. “I understand things perfectly. There’s been mismanagement of funds on your part, and now I have to pay the consequences. Royce, you better handle this situation or else.”

Royce stood up. “Or else what?”

Frustrated, without saying another word, I stood up, grabbed my purse, and dashed out.

“Lexi, don’t do anything drastic.”

I threw my hands up in the air.

“Everything okay?” Shannon asked, as I whisked passed her desk.

“Ask your boss,” I said, as I rushed out of the front door of the funeral home.

I got behind the wheel of my car and closed my eyes, taking in a few deep breaths before exhaling.

The knock on my window brought me out of my tranquil moment. I rolled my window down. “What?” I asked with attitude, yet sounding strangely calm.

Royce answered slowly, “For now, all of the credit cards are frozen except for one. And I have that one.”

I placed the car in reverse and sped out of the parking lot, not caring if I ran over Royce’s foot. I saw him looking at me from my rearview mirror. At that moment, I couldn’t stand the sight of him.

Shelia M. Goss is the Essence magazine and Dallas Morning News bestselling author of ten contemporary fiction novels, including Delilah, Ruthless, My Invisible Husband, Savannah’s Curse, and Montana’s Way. Delilah was a 2012 Emma Awards Finalist, and Montana’s Way, Ruthless, and Delilah have appeared on the top twenty bestsellers list of Black Expressions. A speaker at literary conferences across the country, Shelia also works closely with librarians supporting literacy and increasing awareness via workshops for adults and teens.