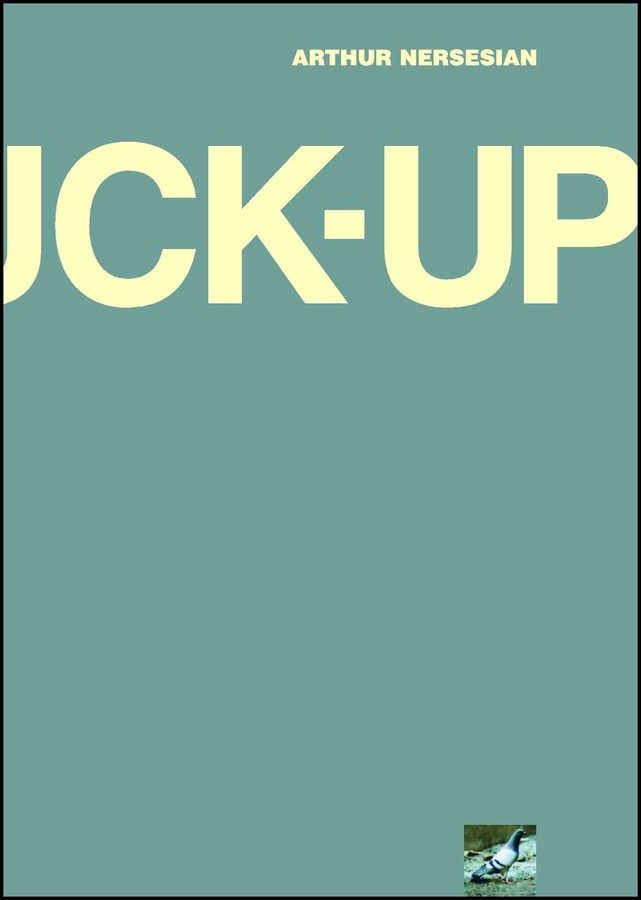 This is the darkly hilarious odyssey of an anonymous slacker. He's a perennial couch-surfer, an aspiring writer searching for himself in spite of himself, and he's just trying to survive. But life has other things in store for the fuck-up. From being dumped by his girlfriend to getting fired for asking for a raise, from falling into a robbery to posing as a gay man to keep his job at a porno theater, the fuck-up's tragi-comedy is perfectly realized by Arthur Nersesian, who manages to create humor and suspense out of urban desperation. "Read it and howl," says Bruce Benderson (author of User), "and be glad it didn't happen to you."

Chapter One
Perhaps the price of comfort is that life passes more rapidly. But for anyone who has lived in uneasiness, even for a short, memorable duration, it's a trade-off that will gladly be made. When I was in my teens, I made an appraisal of how comfortable my life could turn out when I became the age I am now. Because of a mechanical failure, the prediction was inexact. Things reversed. I ended up living somewhere I once avoided, with a woman whom I genuinely once disliked.
Recently we celebrated our seventh anniversary together with a decent dinner and a not dreadful film. I got out of work early that evening and took the F train to Forty-second Street. I crossed Fifth Avenue toward the Main Branch of the Public Library, but paused in the middle of the crosswalk. It was filling up with the evening rush hour crowd: men in trench coats, secretaries in tennis shoes, cabs in the crosswalk, cars honking, leviathan buses zooming inches, braking, zooming again, and bike messengers slicing through it all. The last time I was in that spot, seven years ago, there wasn't a person in sight.
Seven years ago that day, as dawn rose, I remember standing in roughly the same spot watching as the traffic signals hanging over each intersection slowly turned yellow then red. Cars zoomed forward, headlights still on, staying ahead of the changing lights; at dusk they could make it all the way down without a single red light.
At rush hour, the entire avenue was gridlocked. But I could still faintly make out the small white crown of the Washington Square Arch at the very end. The anniversary of my relationship coincided with that dawning, and although that morning marked something that eluded celebration, it couldn't be forgotten either.
Something honked at me, so I crossed the street, reboarded the packed F train, and returned to Brooklyn for the anniversary dinner.

Arthur Nersesian is an American novelist, playwright, and poet. He has written eight novels including The Fuck-Up, Chinese Takeout, Manhattan Loverboy, Suicide Casanova, Dogrun, and Unlubricated. He lives in New York City.

The Village Voice [A] terrific novel....The charm and grit of Nersesian's voice is immediately enveloping, as the down-and-out but oddly up narrator...slinks through Alphabet City and guttural utterances of love.

Paper Nersesian creates a charming everyman whose candor and sure-footed description of his physical surroundings and emotional framework help his tale flow naturally and therefore believably.

Time Out For those who remember that the eighties were as much about destitute grit as they were about the decadent glitz described in the novels of Bret Easton Ellis and Jay McInerney, this book will come as a fast-paced reminder.

Smug Magazine Touted as the bottled essence of early eighties East Village living, The Fuck-Up is, refreshingly, nothing nearly so limited....A cult favorite, I'd say it's ready to become a legitimate religion.

Jennifer Belle author of Going Down Having "grown to tolerate all of New York's degradations," Arthur Nersesian's main character is irresistibly charming, funny, and real. Nersesian's writing, reminding me at times of John Patrick Shanley and Gogol, is beautiful, especially when it is about women and love. The Fuck-Up is a terrific success.