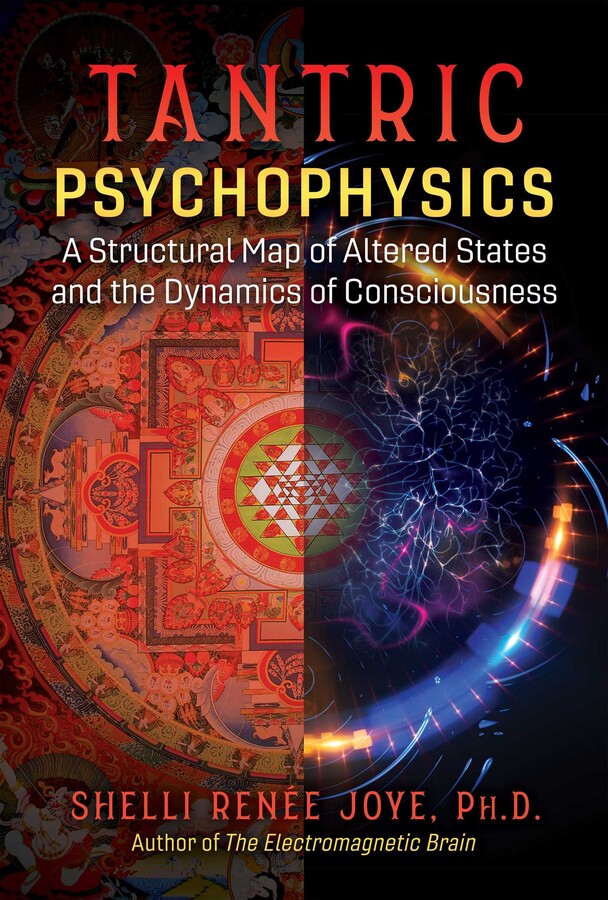 A Structural Map of Altered States and the Dynamics of Consciousness

• Presents a wide-ranging collection of practical techniques, as well as numerous figures and diagrams, to facilitate navigation of altered states of consciousness and heightened mystical states

Throughout the millennia shamans, saints, and yogis have discovered how the brain-mind can be reprogrammed to become a powerful instrument facilitating access to higher states of consciousness. In particular, the written Tantric texts of India and Tibet describe, in extraordinarily precise detail, interior transformations of conscious energy along with numerous techniques for stimulating, modulating, and transforming consciousness to reach increasingly higher states and stages of awareness.

In this in-depth examination of esoteric Tantric practices, Shelli Renée Joye, Ph.D., presents a wide-ranging collection of psychophysical techniques integrating Tibetan Vajrayana and Patanjali’s Yoga to induce altered states of consciousness for the exploration of heightened mystical states. Sharing numerous figures and diagrams, she shows how these theories and techniques are not only fully supported by modern biophysics, brain science, and quantum physics but are also in line with the work of Rudolf Steiner, G. I. Gurdjieff, Pierre Teilhard de Chardin, Aurobindo Ghose, Max Planck, and David Bohm. The author also shares insights from her own personal practices for consciousness exploration, which include prayer, mantra, emptying the mind, psychedelics, yoga, and visualization of interior physiology.

Offering a structural map of the dynamics of consciousness, Joye reveals that one can develop new ways of tuning and directing consciousness to reach extraordinary modes of being and intense levels of lucid awareness, the requisites for the direct exploration of supersensible dimensions and sailing in the ocean of consciousness.

From Chapter 1. What is Tantric Psychophysics?

Yet Tantra as a Sanskrit word translates rather innocuously as “a loom, a weaving, an instrument or a system.” The connotation is that the subject is an inclusive source of knowledge derived from direct human experience. It is a methodology developed as an instrument to retrieve an integrated knowledge that culminates in deep wisdom, a knowledge more immediate and comprehensive than that which might be obtained through mastering individual subjects separately (e.g., philosophy, religion, physiology, physics, etc.). Tantra can thus be seen as an approach to the exploration of consciousness that adopts anything “that works” for the attainent of a wider and more intense range of direct awareness and understanding of conscious realities, regions that are seldom experienced in normal everyday life.

The earliest use of the word tantra is found in the Rig Veda, the oldest of the Vedic Sanskrit texts, composed around 1500 BCE in northern India. In this Vedic context, tantra appears to indicate the warp of a loom, the vertical series of threads that are transformed by intersections with the horizontal threads (often called the woof) into solid cloth. As such the word tantra implies an “interweaving of traditions and teachings as threads” that create a solid, practical, useful technique or practice.(2)

While the roots of the word Tantra might indicate “threads of technique on a loom of experience,” the term has also been intepreted as an “extending” or “continuing.” It is in such a sense that ancient cultures in India applied the term to multiple systems that evolved largely from the Vedic philosophy and religion, but were adopted by a broader, more inclusive spectrum of practitioners.(3) Whereas Brahmanical Vedic religious practice was open exclusively only to males of a highly specific social castes, the Tantra practices offered a lowering of such barriers and came to incorporate not only women and members of societies prohibited from Vedic worship, but also those elements of non-Vedic culture that were experienced to be of particular value and efficacy.

Tantra is a methodology, a system synthesizing innumerable practical applications through which human consciousness may reach that experiential knowledge of the nondual Absolute, called the Brahman in the Upanishads. The Tantric seeks to realize the union of opposites, to acquire knowledge-by-experience--to experimentally “know” that state of non-duality expressed so paradoxically in the Upanishads--and works to contact, connect with, and fuse the dualities in the microcosm of the human body into an experience of macrocosmic unity, one that both transcends and includes the manifest cosmic universe. The web of knowledge that is called Tantra gives particular credence to “what works,” and thus a myriad of practices that have been found efficacious have been handed down through the ages and have been incorporated into its broad spectrum of liturgical and psychophysical practices.

The material presented here is not an attempt to approach comprehensivity in its treatment of the forest that is Hindu or Tibetan Buddhist (or American) Tantra. Rather it is a general survey, an effort to give some general form to the terrain and to describe a sufficient number of prominent landmarks and relate them to contemporary maps of science to serve as a general (however incomplete) map to the territory of Tantra. The intent is to increase the efficacy of the reader’s own efforts to explore consciousness directly, and in order to facilitate an understanding of Tantric maps and methods for the modern educated reader, the material in the following chapters has been grounded as far as possible in scientific principles, terminology, and numerous diagrams.

Tantra is above all a practical approach to the exploration of what has been called mystical experience. Tantric experiential practices weave together innumerable techniques that have been found effective for catalyzing states of supersensory perception. Here the British traveler and scholar John Blofeld describes the goal.

“It should be remembered that the prime concern is practice. If something is conducive to spiritual advancement, it is good; whether the theory behind it is properly understood or not matters much or little according to the extent to which that understanding affects the quality and direction of the practice.”(4)

Nothing has been wasted in Tantric efforts to practice “what works” to attain non-ordinary states of consciousness, and sexual union or maithuna has been among the most notorious practices attributed to Tantric practitioners.

However the actual effort involves having the practitioners visualize their relationship as being that between Shiva and Shakti, the divine male and divine female principles, and a primary instruction was that the individuals were to stop short of actually exchanging bodily fluids. The scriptures warn that unless this spiritual transformation occurs the union is incomplete.(6)

Orthodox proponents of traditional religions in India have often scorned and condemned those who were attracted to Tantric practices, many of which were known to have been conducted by women “Tantrikas” and even “untouchables,” those at the very bottom of the caste system’s social hierarchy.

However, it is likely that these rituals, which so shocked the British occupiers, were not regularly performed except by small groups of highly trained adepts; the usual Tantric ceremony was purely symbolic and even more fastidious than the pujas in Hindu temples.(7) Yet Tantric knowledge was disseminated widely in the subcontinent over the centuries, and has been practiced and developed further in Tibet and India over millennia of psychic experimentation by innumerable generations of seekers in their passion to explore the more esoteric realms of the psyche. Unfortunately, it is also a category of knowledge that modern science has largely ignored, and if acknowledged at all, this metaphysical, “esoteric science” has been dismissed outright as being of dubious worth, likely dangerous, and not worth investigating.

By contrast, modern science has rigorously confined its focus almost exclusively upon repeatable experiments involving measurements in space and time. The assumption that the “real world” of space-time is all that is worth studying has become almost a religious tenet of its own for the material scientist, and the subject areas of metaphysics (religion, mysticism, art and philosophical speculation) have been, perhaps until very recently, categorically excluded from scientific journals. How did this come about?

One plausible antecedent to the split can be seen in an incident that occurred over two thousand years ago, attributed to a Greek librarian in the attempt to organize the thousands of document scrolls being stored within the first public library. To differentiate the subjects of physics (geometry and physical sciences) from all others, this early Greek public servant coined the word “metaphysics” (meta meaning “beyond,” “upon,” or “after”), which simply means to separate any material other than geometry of physical science to a location “after physics” on the library shelves.

Modern science seems to jealously guard this ancient Western librarian’s delineation. But this split between physics and metaphysics has grown so deep and so sharp in its mutual exclusion that opportunities for better understanding (and operating within) the cosmos have been obscured through this artificial, often tacit, segregation. It is time to seek correspondences between modern physics and metaphysics, to effect a reconciliation and bring them together to work in synergy.

Tantra as a widespread Indian metaphysical science originated in Vedic times (3,000 years ago), and reached prominence in Kashmir in the 9th century CE, and shortly after spread north into Tibet with Buddhism. Solidly established in both Hindu and Buddhist lineages, Tantra can be examined within a deep historical stream of evolving Indian cultural-religious exploration, and yet, taken out of the religio-cultural context, it can also be viewed as a body of complex, pragmatically effective psycho-physical exercises for modifying and expanding consciousness and as such it is still quite relevant in the 21st century.

It is to this end that this book focuses. We will not attempt to outline a history of Tantra, nor explore the deepest intricacies of the various school of Tantric metaphysics, but instead will show how a psychophysics of Tantra can be established through the interweaving of physics, quantum physics, and metaphysics. In particular we shall, in the spirit of Tantra, weave a web, a tapestry of understanding interlaced with the threads of these radically contrasting fields of study. In so doing we will contrast and combine the current electromagnetic (EM) field theory of consciousness with the Tantric theories of vibration, expressed both in traditional Indian and Tibetan teachings as well as with Western science and metaphysical conjectures. The overriding them that pervades this book is that all of these disciplines explore the same phenomenon, but from different cultural and academic perspectives. They all offer models and paradigms emerging from widely different historical, cultural, and intellectual perspectives. In our modern world of increasingly interconnected information we might call this methodology Tantric data mining, building a new psychophysics from analysis and correlation in metaphysical observations over a broad spectrum of time, culture, and experience.
Shelli Renée Joye

Shelli Renée Joye, Ph.D., attended Rice University on a physics scholarship and graduated with a degree in Electrical Engineering. After graduation, she worked with John Lilly on interspecies communication and pursued contemplative practice with Chögyam Trungpa Rinpoche. She completed her doctorate in Philosophy, Cosmology, and Consciousness at the California Institute of Integral Studies. The author of several books, including Tuning the Mind, she lives in Viola, California.

A Structural Map of Altered States and the Dynamics of Consciousness