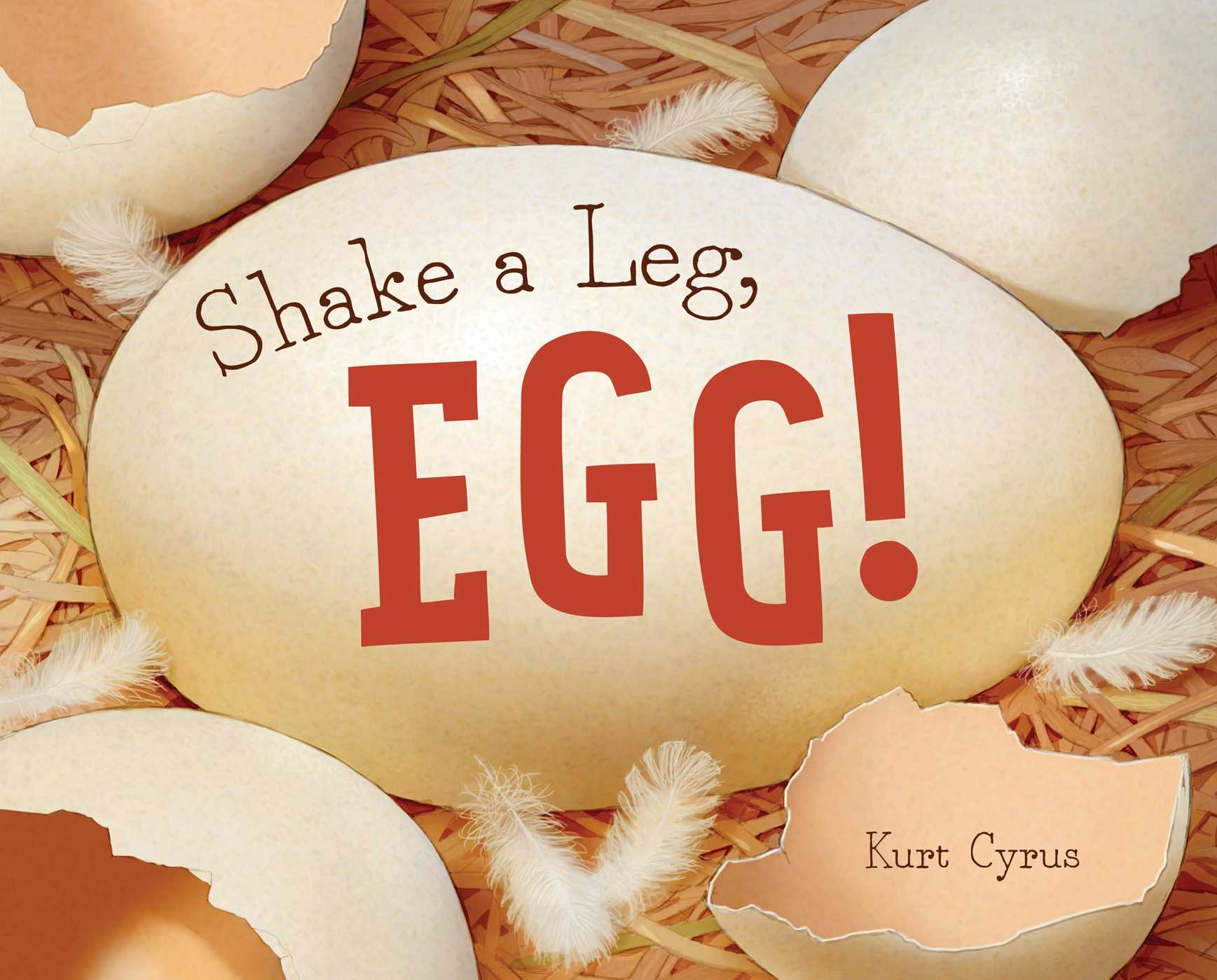 From celebrated author-illustrator Kurt Cyrus comes a playful and whimsical picture book that celebrates the excitement and anticipation of a soon-to-be-born baby.

It’s springtime, and the pond is bursting with new life. There are beaver pups, heron hatchlings, and lots and lots of ducklings. Everyone is out and about, swimming, flapping, chirping, and quacking—except for one family of geese. When, oh when, will their last little one break on out and join the waiting world?

Kurt Cyrus has illustrated numerous acclaimed picture books celebrating the natural world, including What in the World?: Numbers in Nature by Nancy Raines Day; Mammoths on the Move by Lisa Wheeler; and his own Tadpole Rex and The Voyage of Turtle Rex. His art also appears in the middle grade series Pals in Peril by M.T. Anderson. Kurt lives with his wife in McMinnville, Oregon. Visit him at KurtCyrus.com.

Kurt Cyrus has illustrated numerous acclaimed picture books celebrating the natural world, including What in the World?: Numbers in Nature by Nancy Raines Day; Mammoths on the Move by Lisa Wheeler; and his own Tadpole Rex and The Voyage of Turtle Rex. His art also appears in the middle grade series Pals in Peril by M.T. Anderson. Kurt lives with his wife in McMinnville, Oregon. Visit him at KurtCyrus.com.

A laggard gosling is encouraged to leave its shell and join its family. This perfectly executed tale of a slowpoke begins with a title- page image of four goslings surrounding an egg. On the next page, there's a striking image:, a close-up of the mother Canada goose's head, poking at the last unbroken egg in the nest. "Hello in there! / Are you aware…." The next spread pulls back to show mother, eggs, and other goslings, all clearly impatient. She continues, "how long we've all / been waiting?" Cyrus then moves high overhead to display the whole scene: the nest on the beach, the goose family (gander, too), coots in the water, "nosy crows" atop a tree. He goes on to show the nest from a variety of angles as the mother goose continues to urge her nestling to emerge. The rhythmic text, full of repeating sounds, reads aloud beautifully. Knowledgeable readers will recognize other waterside residents: beavers, blue herons, turtles, and a dragonfly. Varying perspectives and the contrast between the pale yellows and tans of the nest and the green of the surroundings make each spread a surprise. With fine lines and a gentle watercolor wash, these images are comfortably realistic. Readers can be assured that this mother goose will continue to be gentle but firm as her offspring encounters the world—still just a bit behind. For dawdlers everywhere. (Picture book. 2-6)

In rhyming text with sweet, upbeat touches and lovely illustrations, this celebrates nature’s beauty as well as springtime’s renewal. At a pond, a family of geese, including four goslings, are waiting for one last egg to hatch, but it’s taking its time. Meanwhile, other geese rise and soar above. But “where does every flight begin? / A nest. An egg. A chick like you.” When the gosling finally makes its bleary-eyed appearance, the narrator warmly welcomes the new arrival: “Meet the pond. / Greet the sun. / Say hello to everyone!” Cyrus’ intricately detailed, naturalistic illustrations nicely use varying perspectives. The bird’s-eye views of the lively pond, teeming with lush foliage and a wide array of wildlife, are enlivened by close-ups of thegoose, her nest of fluffy goslings, and the warm, remaining egg. The bouncy lines convey support and encouragement, while lyrically capturing a sense of nature’s interconnectedness and vibrancy. This approachable picture book is a natural fit for a springtime read-aloud or for little ones nervous about coming out of their own metaphorical shells. — Shelle Rosenfeld

In a nest by a springtime pond, several baby Canada geese hatch from their eggs, but one straggler remains in its shell. In gentle urging verse that seems to channel the voice of the geese’s mother, Cyrus (Billions of Bricks) addresses the gosling inside the unopened egg: “Buds are bursting open./ Sprouts are breaking through./ Eggs are hatching everywhere./ You can do it too!” Cyrus’s artwork is exquisite in its attention to detail, from the mottled texture of the mother goose’s webbed feet to the goslings’ downy feathers and the translucence of broken eggshells; shifts in perspective capture the buzz of activity within this ecosystem from multiple angles. When the last gosling emerges, Cyrus wisely resists an “Aww, isn’t that cute?” moment, instead portraying the newborn as bedraggled, soggy feathered, and rather dazed—a far cry from its adorable, fluffy brethren. Ages 2–8.

A Canada goose and her four goslings eagerly await the arrival of their newest family member. “Are you aware…/how long we’ve all/been waiting?” Mother asks. New life is blooming all around the pond: pussy willows wave, green plants are sprouting, baby birds fill the nest, and ducklings swim in a row. Still the geese wait and wait until finally a very wet little one emerges to join its siblings and parents in a swim across the water. While not breaking new ground, this is a delightful package of brief text combined with striking illustrations, most of them photo-realistic close-ups on spreads. Cyrus fills his pictures with details, such as the birds’ feathers and down, straw in the nest, and various pond creatures. Mom reaches down to speak to her egg-enclosed offspring, her beak so close, only her enormous head fits on the page. Four fluffy goslings, their own shells lying cracked open, surround the unhatched egg. At last, their beaks open in excited anticipation, they watch as the latecomer pokes its way out. Other lovely spreads depict “buds bursting,” creatures “swimming [and] slapping,” and “wings whistling overhead” as new life blossoms around the pond. The rhyming, alliterative text invites participation, and the large pictures provide a striking backdrop for a discussion of animal life and the signs of spring. VERDICT A charming seasonal read-aloud for most libraries.