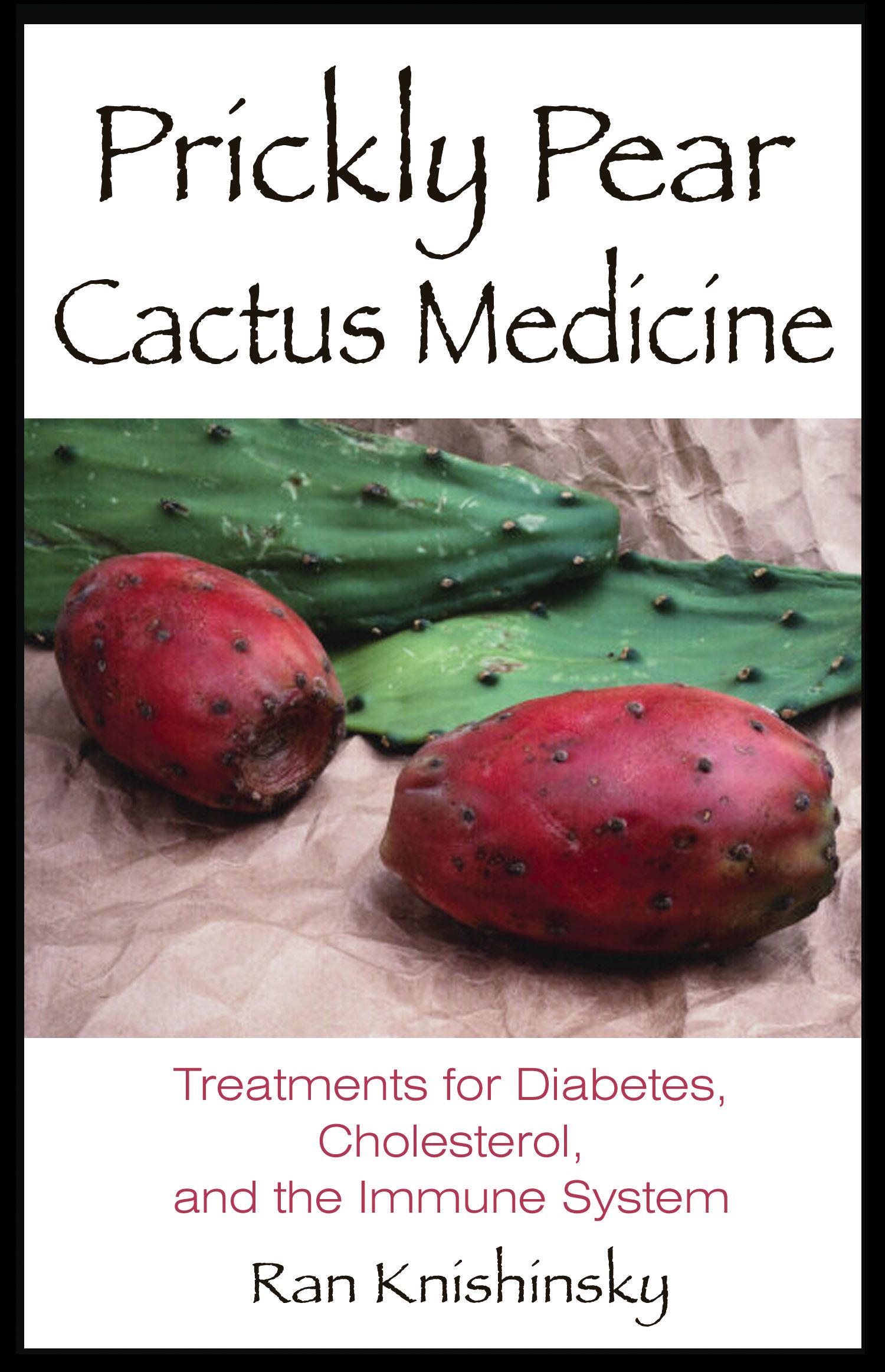 Treatments for Diabetes, Cholesterol, and the Immune System

• Examines the scientific research promoting the cactus as a natural diabetes and cholesterol medication as well as its use in the treatment of obesity, gastrointestinal disorders, skin ailments, and viral infections

• Explores the healing uses of prickly pears from the perspective of doctor, chemist, ethnobotanist, cook, and layman

The prickly pear cactus--a plant that has the distinction of being a vegetable, fruit, and flower all in one--is destined to be the next big herbal superstar, following in the footsteps of St. John’s wort and Echinacea, according to author Ran Knishinsky. One of the driving forces behind its popularity is that each part of this plant functions as both food and medicine. It has been a staple in the diets of the people of the southwestern portion of the United States, the Middle East, parts of Europe and Africa, and Central and South America for hundreds of years.

Traditionally, the prickly pear cactus has been used as a panacea for over 100 different ailments. More recently, it has been the subject of blood cholesterol research trials sponsored by the American Heart Association. In addition to the results of this research, Knishinsky includes scientific studies on the antiviral properties of the cactus to treat herpes, influenza, and HIV, as well as its use in treating obesity, gastrointestinal disorders, and skin ailments. A resource section details the natural food companies that supply prickly pear cactus and a chapter of recipes offers 24 traditional and modern dishes using the pads and fruit of the cactus.

Chapter 3--The Healing Parts of the Prickly Pear Cactus

Very few plants in the botanical kingdom are a vegetable, fruit, flower, and, most importantly, a medicine. The prickly pear cactus is unique among cacti, and in fact among all plants, in that each part of the plant may be used for some healthful purpose. The fruit of the cactus--also known as the pulp or tuna--can be eaten much like other fruits. The pad is the source of many vitamins and minerals. The flowers, which grow from the fruit, are used as herbs. Each of these uses is detailed in the following sections.

One of the tastiest parts of the prickly pear cactus is the fruit. Although low in calories, it is apt to satisfy the sweetest tooth and therefore makes an ideal treat for those watching their waistline. It is similar in shape to the kiwi and comes in its own convenient wrapper. It can be picked off the cactus and eaten raw or prepared in many different ways.

The most common preparations of the fruit are in the forms of beverages, syrups, candies, jellies, marmalades, barbecue sauce, and popsicles (see chapter 11). In the Caicos Islands and throughout various communities in Latin America, the fruit is used for making wine and other alcoholic beverages.

The common name for the prickly pear fruit is tuna. Other names for the fruit include Indian fig and cactus pear. The fruit is becoming increasingly available in the United States in grocery and specialty stores. When available, it is offered for sale both fresh and dried. In Israel, where exportation of the cactus fruits has grown into a large, commercially successful business, the fruit is referred to as a “sabrah.” Interestingly, the word sabrah is also used to identify a person born in the land of Israel. According to local folklore, like the prickly pear fruit, the people of Israel have a rough exterior but are tremendously sweet and soft inside.

Vitamin and Mineral Content
The fruit is packed with co-factors that boost immunity. It contains significant portions of the minerals calcium, magnesium, and potassium. It also contains a large proportion of antioxidant compounds, including flavonoids, that help protect against cancer and are chiefly responsible for protecting the body against the oxidation of cholesterol, a subject that will be investigated in chapter 4. Like the pads (see below), the fruit is high in vitamin A in the form of beta-carotene and also vitamin C.

Medicinal Benefits
The fruits of the prickly pear have been under intense focus by researchers in recent years. Scientists have noted positive links between the consumption of the cactus fruit and its antihyperglycemic effects. In a study published by the International Journal of Pharmacognosy, researchers found that the daily intake of the prickly pear fruit yielded positive results in laboratory animals. For example, the Opuntia dillenii species of the fruit has exhibited a notable antidiabetic effect on rabbits. This species of fruit produced hypoglycemia in rabbits mainly by reducing intestinal absorption of glucose.

Studies conducted at the University of Arizona by Dr. Maria Luz Fernandez, one of the prickly pear’s key researchers, show the effects of diet on cholesterol metabolism. Her research includes the use of prickly pear pectin, a glutinous substance found in the cactus fruit. The results of the tests point to a decrease in plasma cholesterol, which is mainly a decrease in low-density lipoprotein. Other results also suggest that prickly pear pectin may modulate the body’s glucose response.

Vitamin and Mineral Content
The modest cactus pads of the prickly pear are a storehouse of nutrients. They include a healthy dose of the minerals potassium, magnesium, calcium, and iron. They are also particularly high in the dietary antioxidant vitamin A (in the form of beta-carotene) in levels comparable to spinach, and high in the antioxidant vitamin C.

Antioxidants are agents that restrict the deleterious effects of oxidant reactions within the body. Daily intake of antioxidants has shown to be effective in preventing the oxidation of arterial cholesterol and reversing arterial damage. In chapter 4, I will explore the role of antioxidants on plasma LDL cholesterol concentrations.

Amino Acids
The pads also contain a full range of amino acids, the building blocks of protein, including the eight essential amino acids not manufactured by the body. The benefits of amino acid consumption are far-reaching, as protein is involved in multiple chemical interactions within the body. It is extremely rare that a plant source provides such a high and broad composition of amino acids as the prickly pear. Its utility as a nutritional, high-fiber, low-fat food is amplified by this unique and exquisite amino acid profile. Vegans and vegetarians who rely on legumes such as soybeans and peas to fulfill their protein requirements will find in the nopal pads a high-quality source of protein.

Medicinal Benefits
According to Charles W. Weber, professor of nutritional sciences at the University of Arizona, perhaps the most important component in the cactus is its dietary soluble fiber, which comes especially in the mucilage and pectin.1 Mucilage is the sticky juice that oozes from the pad when it is sliced. In medical circles, this sticky substance is referred to as mucilaginous polysaccharide. Interestingly, the polysaccharides are the primary active ingredient of other popular immune-stimulating herbs such as aloe vera, echinacea, astragalus, and Oriental mushrooms.

Other recent medical studies on the prickly pear cactus pads have explored and verified their use as an “antidiabetic” remedy. Studies published in the Journal of Ethnopharmacology and Diabetes Care have documented the effectiveness of prickly pear pad use in the treatment of individuals with type II diabetes. Results of the studies have yielded strong positive results showing a noticeable hypoglycemic effect in patients with non-insulin-dependent diabetes mellitus (NIDDM).
Ran Knishinsky

Ran Knishinsky is a professional health researcher and writer and the founder of NutraConsulting, a consulting firm to the natural products industry. He is the author of The Clay Cure and The Prozac Alternative.

"Prickly Pear Cactus Medicine is the first guide to the natural healing powers of the prickly pear cactus."

"The prickly pear is one of the most widespread cacti on Earth and has some of the most diverse uses, both as food and medicine. This book provides a comprehensive and detailed review of the benefits of this remarkable plant and a compelling argument for its increased acceptance into modern herbalism."

– Mark Blumenthal, executive director of the American Botanical Council and editor of HerbalGram

"As an herbalist and ethnobotanist, I have scoured the literature to find more details about the use of these curious plants. My search has been rewarded by the publication of Ran Knishinsky's new book, Prickly Pear Cactus Medicine. He has done a masterful job unearthing details on the use of the prickly pear cactus for food and for medicine. This, the only cactus widely available in American supermarkets, is poised to become a dietary staple and Knishinsky's book provides the spark to move prickly pear from beyond ethnic use to mainstream acceptance."

– David Winston, AHG, dean of the Herbal Therapeutics School of Botanical Medicine and chair of the Ad

"A wonderful book about a wonderful herb. An excellent blend of good science and real life apllications showing the relevance of prickly pear in the treatment of conditions such as diabetes, cholesterol management and a range of immunological problems. The wealth of gourmet recipes and practical guidelines will prove invaluable to the many people that prickly pear will benefit."

"For paean to the prickly pear, and as a source of good practical information about its uses, this book is an excellent resource."

". . . how intriguing it is that prickly pear cactus grows so profusely here in the Southwest and is also the treatment for a disease that is epidemic here amongst the native people."

Treatments for Diabetes, Cholesterol, and the Immune System