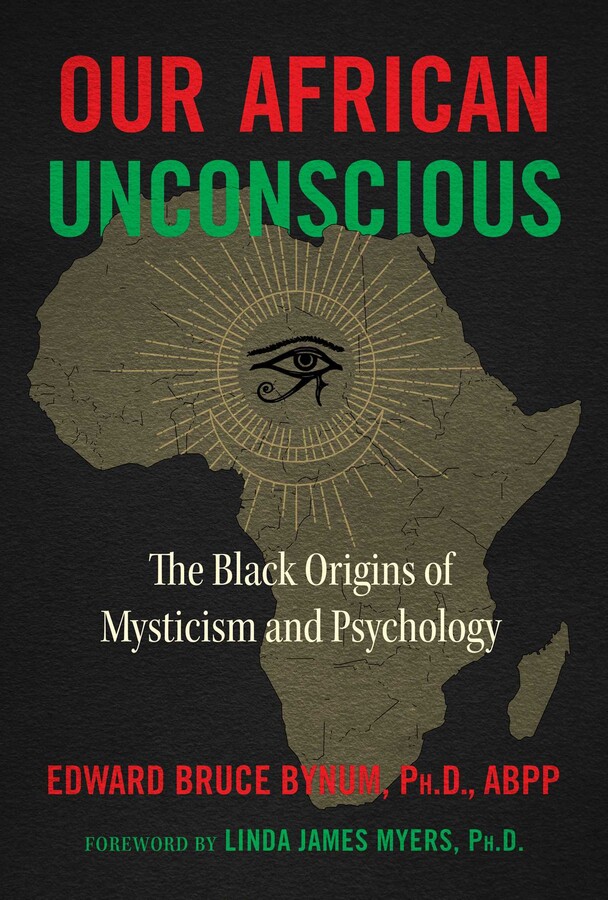 • Examines the Oldawan, the Ancient Soul of Africa, and its correlation with what modern psychologists have defined as the collective unconscious

• Draws on archaeology, DNA research, history, and depth psychology to reveal how the biological and spiritual roots of religion and science came out of Africa

• Explores the reflections of our African unconscious in the present confrontation in the Americas, in the work of the Founding Fathers, and in modern psychospirituality

The fossil record confirms that humanity originated in Africa. Yet somehow we have overlooked that Africa is also at the root of all that makes us human--our spirituality, civilization, arts, sciences, philosophy, and our conscious and unconscious minds.

In this African-revisioned look at the unfolding of human history and culture, Edward Bruce Bynum reveals how our collective unconscious is African. Drawing on archaeology, DNA research, history, depth psychology, and the biological and spiritual roots of religion and science, he demonstrates how all modern human beings, regardless of ethnic or racial categorizations, share a common deeper identity, both psychically and genetically, connected with a primordial African unconscious.

Exploring the beginning of early religions, spirituality, and mysticism in Africa, along with philosophy, art, and science, the author looks at the Egyptian Nubian role in the rise of civilization and the emergence of Kemetic Egypt, revealing how and why ancient Egypt was separated from the rest of Africa in the Western mind--despite it being the most sophisticated expression of the Mother Continent. He examines the Oldawan, the Ancient Soul, and its correlation with what modern psychologists have defined as the collective unconscious. Revealing the spiritual and psychological ramifications of our shared African ancestry, the author examines its reflections in the present confrontation in the Americas, in the work of the Founding Fathers, and in modern Black spirituality, which arose from African diaspora religion and philosophy.

By recognizing our shared African unconscious, the matrix that forms the deepest luminous core of human identity, we can learn to see and feel that the differences between one person and another are merely superficial and ultimately there is no real separation between the material and the spiritual.

From Chapter 2. The African Unconscious
Oldawan: The Ancient Soul

The oldest human soul is an African soul. Rooted in anthropology, biology, history, and genetics, the mysterious ocean that is human consciousness is at bottom collective, luminous, and genotypically African in its genesis. We have mentioned in the previous chapter that the oldest known human race is an African race. This leads us to the intuition that the oldest, deepest, and most primordial level of human consciousness is that mode of consciousness the hominid species has been most preoccupied with in its 2.5 to 3 million years of existence. “Man,” in some variation of his present form, was in Africa from 2.5 to 3 million years ago and then, as Homo erectus, spread to the other areas of the world. Humankind carried out its first preliminary and earliest most sophisticated experiments within the African milieu. All the hominid variations, from the early and primitive lost pre-Australopithecines, to the Australopithecines we know of, to Homo habilis to Homo erectus and eventually to Homo sapiens sapiens, unfolded on the same continent shaped like a skull looking eastward on the planet like the mysterious sphinx. Their deep recurrent experiences, their racial memories are rooted in our own brains in a collective, primordial way. Indeed, from 2.5 million years ago hominid ancestors experimented in some conscious way with their own mental landscape and with branchings and diversifications unfolded progressively more subtle forms of intelligence. These branchings, approximately 150,000 to 200,000 years ago, criss-crossed in a single female human being, dark and Africoid, on a forgotten savanna. Perhaps 188,000 years ago an Africoid male wrote upon every Y chromosome his own unfailing signature. In a very real way, the roots of the collective hominid and the human unconscious are really a primordial African unconscious.

The great pioneer Sigmund Freud was actually aware of this on some level. He referred to the collective unconscious as the racial memory. His library in Vienna was littered with artifacts from African and especially Egyptian history and anthropology. Freud was also ambivalent about this realization and revealed this on several occasions. He feared, as many do, the notion of a primordial African consciousness as the wellspring of human consciousness. He referred to it as the “black tide of Mud and occultism.” It was perhaps the greater fear of the boundless unconscious, fear of the primordial darkness, and his own ultimate racial and egoic dissolution as a European. Carl Jung referred to the collective unconscious as, indeed, we understand it generally today. However Jung was also aware from his own experience that he felt most in contact with his deepest, most elemental self when he was traveling the African continent. He left Europe several times with the intention of establishing a more universal perspective on this collective unconscious by studying the dreams of Blacks in Africa and in the United States. Many times he mentioned the uncanny experiences he had and the sense of some bottomless primordial memory underneath and foundationalizing his recent, emergent European memory. Despite his vision, he was still like many Europeans afraid of “going Black” and all that means for an ego identified as a White person. Recall that prior to 25,000 to 30,000 years ago, all Homo sapiens sapiens were Black and that “racial” diversification as we think of it today had not yet begun. The present-day implication of this, of course, is that beneath the wealth of contents in our shared or multicultural unconscious the primordial essence and genetic roots of our African dynamism dwells. Jung felt this deeper racial memory as his bedrock memory, and it unfolded within him a great peace and sense of unity between all the peoples of his planet. Many people have had similar experiences and insights.

This repression of the primordial African unconscious is an act of repression not only in Europe but also in Eurocentric science. It might be thought of as the collective “threatened return of the repressed.” In the early Greek myths appears the motif of the “devouring sphinx,” and we can see in this myth the fear of an ancient Kemetic Egyptian consciousness. This is associated with the earliest Greek myths and stories that allude to their origins as an Egyptian colony from Africa (Diop, 1991). The Greeks as a people did not come from Egypt of course, but strong early elements of their great cultural flowering did owe much to their neighbors farther to the south who had been flowering for millennia. It would seem that the Greek consciousness and Greek civilization, emerging from an early colony of Egyptians from their own mythohistorical point of view, was in some ways afraid of a slideback into its parent stock. This process of the emergence of classical Greek culture from contributions from Egyptian culture quickly arose around 600 B.C.E. However, it would be unfair to assume that the ancient Greeks were anti-Egyptian. If anything, they were very much pro-Egyptian and recognized ancient Egypt as not only the source of much of their own civilization but the source of civilization itself. Civilization is taken to mean not only medicine, but also the arts of writing, mathematics, astronomy, archeology, history, and philosophy.

The later Romans had a collective unconscious memory of ancient Egypt. In ancient Rome there were many cults of the “Black Madonna.” These were variations of the earlier Kemetic cult of Isis, a cult which itself was even older than the Egyptians and originated in the Nubian civilization that was prior to the Egyptian civilization. As mentioned before, the cult of the Black Madonna in all its variations can be found scattered throughout Europe and the Near East. This is a manifestation of the memory and the influence of the collective unconscious in its African expression. As we shall see in future chapters, numerous luminaries of the Greek tradition actually studied in the Egyptian mystery schools and later translated directly the texts and philosophy of ancient Egypt into their own (Finch, 1990; James, 1954; Schwaller de Lubicz, 1961).

When the genius of Kemetic Egyptian civilization was rediscovered by Europe in the 18th and 19th centuries, this threatened return of the repressed was handled differently. Egypt was mentally and “scientifically” taken out of Africa and made an extension of European and Middle Eastern history and development. It became “Egypt and Africa.” Along with this came a sudden interest in Indian culture and the Sanskrit language. The Indo-Aryan connection to India was heightened, and slowly a Caucasian genesis was seen in Hindu civilization. The indigenous African was erased from the teaching of history and the unfoldment of human civilization. This subtle psychological process continues to this day on a large scale. With a few notable exceptions, in the Eurocentric tradition it was simply inconceivable that a highly evolved civilization that gave light to the mind could have its genesis in a dark and mysterious world and then move in an African migration down toward the Mediterranean. This is despite the fact that the Romans did not come until Caesar, around 30 B.C.E., that the Greeks did not come in mass numbers before Alexander in 333 B.C.E., that the Jews did not come to be known before Abraham and Joseph, that the Assyrians, Phoenicians, and many others did not come until very late in the day. By that time the Kemetic lens of the human mind had already developed several written scripts, astronomy, medicine, mathematics, mummification, a form of biological psychiatry, a precise calendar, the pyramids, and by the 8th century B.C.E. in the 25th Dynasty, had made contact with peoples from southern India to the Americas. Such awareness must be repressed if you are to hold people in bondage and justify the belief that they are an inferior race. Otherwise, a deep disquiet disturbs the peace and the order of society is merely based on pure power, aggression, and savagery. This is incongruous with a selfperception of being a person or people of reason, enlightened and committed to the spiritual equality of all human souls in the community of God. Yes, all this must be repressed and replaced with a perception that is more soothing and justifying of one’s actions and the “mission” of one’s culture. And yet this deep memory does not stay dead. It is alive and gives rise to our deeper experiences and perhaps our earliest, most noble aspirations. It is within all of us and all of us are within it.
Edward Bruce Bynum

Edward Bruce Bynum, Ph.D., A.B.P.P., is a clinical psychologist and the director of behavioral medicine at the University of Massachusetts Health Services in Amherst. A student of Swami Chandrasekharanand Saraswati and a winner of the Abraham H. Maslow award from the American Psychological Association, he is the author of several books, including The African Unconscious. He lives in Pelham, Massachusetts.