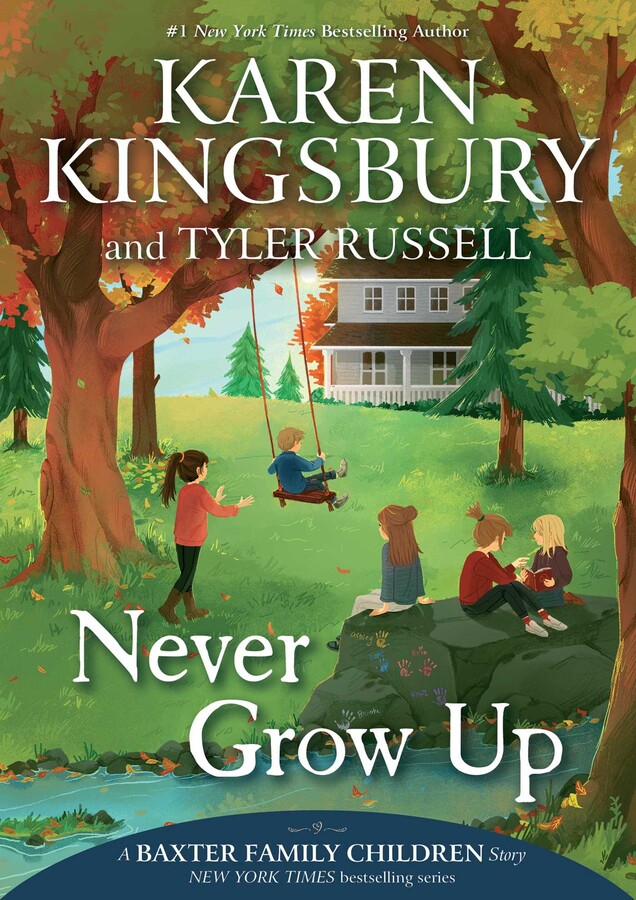 In the third book in Karen Kingsbury and Tyler Russell’s beloved series about the Baxter children, Ashley and Kari Baxter struggle with what it means to grow up.

When Kari Baxter is assigned an essay about what she wants to be when she grows up, her mind goes blank. She doesn’t want to grow up; she wants everything to stay just like it is. But Kari comes to realize that while making time stand still isn’t possible, she can enjoy every moment with her best family ever.

Meanwhile, Ashley Baxter feels the same way. She is worried her siblings are growing up too fast. When she wins the role of Wendy in her school performance of Peter Pan, Ashley gets an idea. Maybe she and her siblings can pledge to never grow up at all!

This third story in the Baxter Family Children series shares the reassuring message that even though growing up can be tough, family and friends are always there with support and love.

Kari Baxter’s head was somewhere in the clouds.

Nothing very unusual about that. Kari was more of a dreamer than most kids in her sixth-grade class. Only this time being in the sky was the exact right place for Kari.

Her teacher, Ms. Nan, was talking to them about meteors. Not from a science fiction book. But actual balls of fire streaking through the real-life sky over their heads. Kari could hardly believe it.

Ms. Nan stood in front of the class. “Next month we’ll have a meteor shower over Bloomington, Indiana.” The teacher’s eyes lit up. She was a big fan of meteors, apparently. She looked down the rows of students. “We’ll do a countdown until then, and on that night each of you will spend an hour viewing the meteor shower from home.”

Excitement welled up in Kari. An in-person meteor shower! Right here in Bloomington! She couldn’t wait to tell her family. Her four siblings would also want to count down the days, Kari was sure.

She gazed out the window and imagined the night sky covered with streaking lights, and she couldn’t stop smiling. Kari liked school. She was good at all her classes. But this wonderful news took learning to an entirely new level. Kari turned her eyes back to Ms. Nan and listened to every word.

“Boys and girls, I assure you this will be an unforgettable cosmic event.” Ms. Nan sat on the edge of her desk. “Who has seen a meteor shower before and what do we know about them?”

Liza’s hand shot up first. Liza was one of Kari’s new friends, and her teammate on the school’s swim team.

“Well, not exactly.” Liza enjoyed talking. “Last summer we went to Washington State for Fourth of July and my uncle set off a hundred fireworks.” She made a grand gesture with both arms over her head. “All across the whole sky.” Liza smiled and lowered her hands back to her sides. “And that, I believe, was very much like a meteor shower.”

Ms. Nan blinked. Like she wasn’t sure what to say. “I see.” She nodded. “Very nice, Liza.” She looked around. “Has anyone seen an actual meteor shower? With meteors?”

“Hmm.” Their teacher tapped her knee. “Good thought, Jake. They are kind of like stars. Let me show you.” She walked to the blackboard. “Okay.” Ms. Nan drew a small circle. “Here we have Earth. That’s us.” She drew lots of smaller circles around Earth. “These represent other planets and stars. Even debris.”

“Debris?” The question came from Mandy, who sat next to Kari. Mandy was another of Kari’s friends, and also a fellow swimmer. Mandy never fell in the mud or got dirt on her dress at recess. She wrinkled her nose. “You mean… like trash?”

Ms. Nan turned to Mandy. “Well, kind of… There could be rocks, or comets and asteroids. This is typically what we call meteors.” She drew some rocks with fire coming off of them. “A meteor shower is caused by streams of this natural cosmic debris entering Earth’s atmosphere at extremely high speeds.”

Up until that moment Kari had figured she would watch the meteor shower from the middle of their huge front yard. Or on the big rock by the stream behind their new house. The rock was flat and it was the best place for Kari and her older sister, Brooke, and her younger siblings—Ashley, Erin and Luke—to sit and talk.

But now she wasn’t so sure. Maybe they’d be safer inside.

Kari raised her hand. “Ms. Nan… That sounds dangerous. What if meteors crash into Bloomington and we blow up?” Kari’s heart beat harder. “Maybe we should take cover.”

“Well…” Ms. Nan crossed her arms. “I suppose a meteor shower could be dangerous. But it isn’t likely.” She smiled. “I’d say we don’t need to worry.”

Kari tried to imagine how the event would look. “So as the rocks and garbage come into our… atmosphere…?”

“Yes, atmosphere.” Ms. Nan nodded. Patience was her strong suit. “Atmosphere will be one of our spelling words next week.” She hesitated. “Anyway, yes, a meteor shower happens as rocks and debris enter our atmosphere.”

“With flames around them?” Kari still wasn’t convinced this was a good idea.

Ms. Nan laughed and walked over to her calendar. “Forty-one days. Just over a month.”

Kari’s shoulders sank a little. “So… Bloomington might be destroyed in forty-one days?”

“No.” For a second, Ms. Nan laughed out loud… but then she seemed to get control of herself. “Kari. Bloomington will not be destroyed in this meteor shower. Scientists can predict that sort of thing.”

Their teacher started talking about Mars and Jupiter, which gave Kari time to think. Ms. Nan wouldn’t lie to them. Surely the meteor shower wouldn’t destroy Bloomington. And that meant Kari could be excited again.

A real meteor shower right over their very own city!

“All right.” Ms. Nan stood. “Let’s do free reading now. Then after lunch we’ll talk about our next assignment. It’s called: When I Grow Up.”

Kari’s mouth went dry. When she grew up? Why would Ms. Nan want them to think about that? Sixth grade was hard enough without thinking about growing up. She raised her hand superfast.

Kari swallowed. “Do we have to decide today? What we’ll do when we grow up?”

“No.” Something about Ms. Nan’s voice made Kari relax. “You don’t have to decide. I’ll explain everything after lunch.”

She didn’t know how else to put it.

When their teacher was back at her desk, Kari grabbed her journal from her backpack. Journaling was her favorite. She flipped through the pages until she found the next blank one and then, with a quick breath, she began to write:

A meteor shower is coming to Bloomington! In just forty-one days! It sounds like the prettiest light show ever and I bet God has the best seat in the house that night. November 15. Yep. That’s the day. Ms. Nan says not to worry that the flaming meteors will destroy our city. So that’s good. Also, I have to think about growing up. It’s our assignment this afternoon. But the truth is… I have no idea what I want to do. Dancing, maybe. Or soccer. Here’s my secret: I’m not even sure I like being on the swim team, which I haven’t told Liza and Mandy. What if they don’t like me if I’d rather dance? I can’t think about it. Actually, maybe I’ll study meteors.

“All right.” Ms. Nan stood. “Lunchtime.” The bell rang and the students lined up at the door. Kari finished her journal entry.

41 DAYS UNTIL THE METEOR SHOWER! 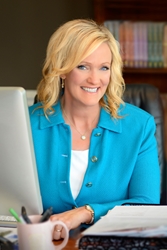 Karen Kingsbury, #1 New York Times bestselling novelist, is America’s favorite inspirational storyteller, with more than twenty-five million copies of her award-winning books in print. Her last dozen titles have topped bestseller lists and many of her novels are under development as major motion pictures. Her Baxter Family books were developed into a TV series. Karen is also an adjunct professor of writing at Liberty University. She and her husband, Donald, live in Tennessee near their children and grandchildren.

Tyler Russell has been telling stories his whole life. In elementary school, he won a national award for a children’s book he wrote, and he has been writing ever since. In 2015, he graduated with a BFA from Lipscomb University. Soon after, he sold his first screenplay, Karen Kingsbury’s Maggie’s Christmas Miracle, which premiered in December of 2017 on Hallmark. Along with screenplays and novels, Tyler is a songwriter, singer, actor, and creative who lives in Nashville, Tennessee, where he enjoys serving his church, adventuring around the city, and spending time with his family.

Olivia Chin Mueller grew up in the small town of Chester, Connecticut, and now lives in Providence, Rhode Island. She attended the Rhode Island School of Design and graduated in 2014. Besides illustrating, Olivia loves playing with her cats, raising silk moths, collecting anything cute, and sewing and felting miniature animals!

More books in this series: A Baxter Family Children Story