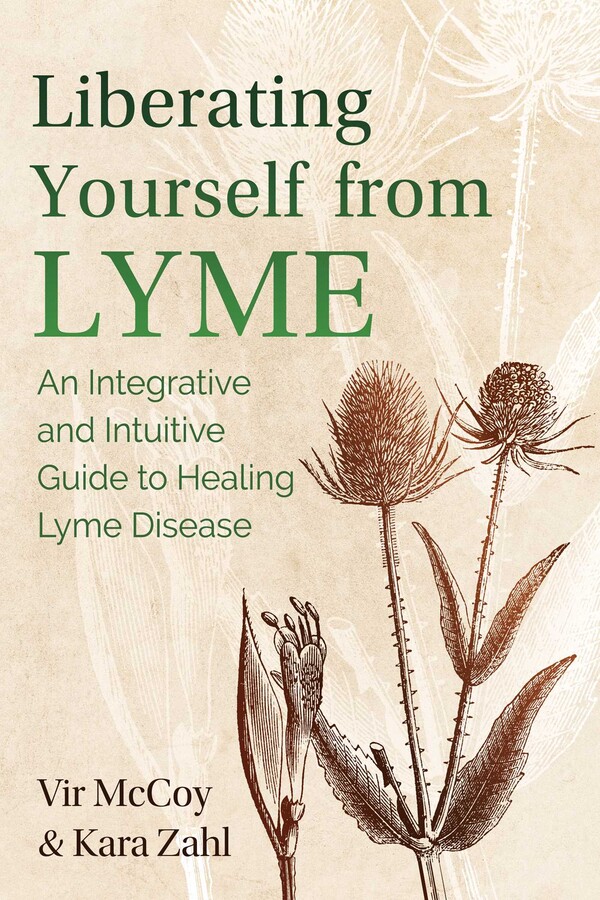 Liberating Yourself from Lyme

An Integrative and Intuitive Guide to Healing Lyme Disease

• Explores the antibiotics, herbs, diet, exercise, beliefs, immune health, and self-healing meditations that the authors used for a complete healing

For some people, recovering from a Lyme disease infection can become an endless battle with physical, mental, and neurological symptoms, especially if it’s not diagnosed early. After they both contracted Lyme in 2001, Vir McCoy and Kara Zahl embarked on standard antibiotic protocols. Soon they both began to have intuitive or sensory impressions about specific remedies their bodies needed, the nature of the disease, and why they were chronically ill. Backing up their intuitive impressions with scientific evidence, they developed a protocol that brought them each a full recovery after nearly 10 years battling chronic Lyme.

In this medical intuitive approach to Lyme, the authors share their personal Lyme journeys and their integrative healing protocol that bridges the scientific and the spiritual. They explore the peculiarities of Lyme disease, including how Lyme is often misdiagnosed, giving it time to establish itself deep within the body’s organs and nervous system, and examine in detail new and standard remedies, with thorough scientific references. They share the spiritual/psychological strategies they successfully employed against Lyme and its coinfections and explain how to increase your sensitivity to what your body is telling you to discover natural remedies and healing actions unique to your individual symptoms. Outlining a program of herbs, diet, and exercise that can work in tandem with traditional Lyme treatments, they also explore how to help the body get rid of this pathogen that possesses an incredible ability to adapt to various treatments and thwart their effectiveness.

Expanding beyond Lyme, the authors offer self-help meditations to help you heal on a deeper level and explain how to access the “holographic medicine chest” to draw on for stronger immunity, energetic healing, and support at any time.

From the Introduction: Learning to Listen

About a year after I was diagnosed with Lyme disease, I went into the hospital to do intravenous antibiotics for forty days. Six months earlier I had finished a course of doxycycline after being initially diagnosed with Lyme, and at the time, I thought it was all over, that I was cured. Little did I know it was just the beginning. Lyme had entered my brain, and a kind of meningitis was ravaging my head and body. As I lay in the hospital bed, I began to cry. I was in a state of utter despair. What in the hell was going on? Why was I sick again after taking antibiotics? I began to pray for help, for anyone or anything to show me what was going on, to show me the way.

Then a miracle happened. I had a vision. I saw a beautiful large oak tree in the woods, and up the side of the trunk, shelf mushrooms were growing. Rows and rows of these beautiful mushrooms spiraled up the tree toward the sky.

I remembered three kinds. Two I recognized from my work as a field biologist as reishi mushrooms, another was a turkey tail mushroom, and the third I had to wait till I got out of the hospital to look up, but it was called chaga.

I need these, I thought.

The vision was so clear and from a place of love that I knew there must be something to it. Once I was out of the hospital, I researched the mushrooms. It turns out that reishi mushrooms have been used for thousands of years as an immune booster in Chinese medicine. Turkey tail mushrooms are also immune boosters and are part of an anticancer drug currently being developed and tested called PSK, and chaga is another incredible immune booster (Stamets, 1999).

After I got out of the hospital, I began to hone my intuitive skills, much like one would practice an instrument or develop a muscle. I began to practice the art of intuitive sensory perception inside my own body and write down what I was seeing, tasting, smelling, and hearing during my motherly loving meditations.

Then I had another breakthrough. One day during my inward viewing, I saw the cysts, those nasty little “eggs” that Lyme transforms into. The cysts can lie dormant for up to a year or more (see chapter 6 for more information about the cysts). I saw these round little eggs inside my brain. I saw rows of them like peas in a peapod, coated with slim (a biofilm). But I also saw a pencil on top of each egg. I couldn’t understand what this image was. A week later, I saw them again in my meditation--pencils on top of eggs. OK, then, I thought, what the hell does a pencil over an egg mean? As I worked with my sensory perception, I began to learn that my body’s intuition would symbolically speak to me and to think outside the box.

I thought, A pencil, hmmm, a pencil contains lead. Does this mean I have lead poisoning? Wait, a pencil contains black lead or graphite, right? But that’s poisonous too. I couldn’t figure it out, and I gave up. Then about a week later, I wandered into the supplement section in Whole Foods Market (as nearly every Lyme patient does) and noticed the homeopathic aisle. I saw one little blue tube identified with the word “Graphites.” Graphites, I thought. That’s black lead! Holy Moses! What do Graphites do exactly? I read the homeopathic pamphlet in the store on Graphites: “Graphites can dissolve toughened skin, scars, boils, and cysts.” Oh, my God, this is what my intuition was telling me! Pencils over eggs! I now believe that Graphites and similar homeopathic remedies are important for dissolving Lyme cysts, and this substance became a key component to my healing.

After this particular incident, I began to write down everything I could, and I started trusting the deeper wisdom that came through the senses and from a place deeper than my mind.

Liberating Yourself from Lyme is written from the intuitive information I have received, as well as investigating the science to back up what I was intuiting. As an artist and a scientist, I have been blessed with the ability to intuit remedies and then do my best to back them up with science (although that wasn’t always possible). By utilizing my intuition, I am in no way invalidating science, as I believe the scientific process is essential for collecting information and facts. This intuitive process is a kind of spiritual science, like an inner Sherlock Holmes looking for clues. It has been both a humbling and validating process in many ways, teaching me to trust my intuition just as much as I would trust the knowledge of a doctor. I would often be “shown” a remedy and then find the medical research that confirmed what I had intuited. This method helped me validate what I was seeing and sensing. In addition to many common antibiotics and herbs, I discovered several unusual medicines and techniques for Lyme that I had never heard of, and I offer them here to help others as they have helped me.
Vir McCoy

Vir McCoy is a teacher, healer, author, lecturer, musician, and ecologist who works both as a bodywork healer and as a field biologist and botanist focusing on endangered species. He lives in Los Angeles, California.

“This immensely practical book takes the science and art of healing Lyme disease to a totally new level. Integrating select conventional medical treatments with a variety of natural healing methods, the authors utilize meditative practices, dreamwork, and intuition as tools to determine what strategy to use when and provide specific instruction for how you too can be empowered to be healed. Equally important, the authors provide insight into the great power of intention and the greater power of love to use illness as an opportunity to learn, heal, and get physically, emotionally, and spiritually stronger than ever.”

– Dana Ullman, M.P.H., C.C.H., author of The Homeopathic Revolution and coauthor of Everybody’s

“Vir and Kara speak many essential truths in this warm, nurturing, and valuable book. They show how balancing trust in oneself and collaboration with experienced practitioners is a seminal recipe for recovery and wellness. There is deep and ancient wisdom to be learned here, and I am grateful that they have added an indelible contribution to the spiritual science of this bourgeoning illness.”

“Thoroughly ‘reader friendly’ and comprehensively informative in organization and presentation, this new edition of Liberating Yourself from Lyme: An Integrative and Intuitive Guide to Healing Lyme Disease should be a part of every community, college, and university library Health/Medicine collection. It should be noted for the personal reading lists of health care professionals and non-specialist general readers with an interest in the subject…”

Liberating Yourself from Lyme

An Integrative and Intuitive Guide to Healing Lyme Disease